“The sand wants to migrate into the road,” says Jerry Jennings from the back of the pickup truck. It’s a bit of an understatement. Jennings, who retired in June, is the former division engineer who covered the Outer Banks for the North Carolina Department of Transportation. The second the truck cluh-clunks across the last expansion joint on the Marc Basnight Bridge, the sand is there, creeping, millions of grains at a time, toward the white line along the shoulder of NC Highway 12. It moves, on breezy days, an inch or so at a time, and it’s not long before the sand is across the white line. A 45-mile-per-hour speed limit makes it dance across the asphalt every time a car or semitruck rolls past. At night, the headlights illuminate a tan haze, each grain a prism that reflects and scatters the light. 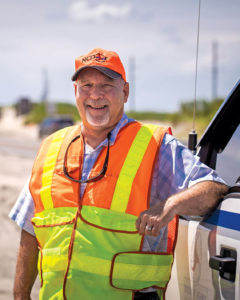 Jeff Ryder is driving the pickup, and he does not share this romantic view of the sand. He’s the guy in charge of the guys who push all of it back into place, back up onto the towering dunes that run along the ocean side of Highway 12 on Hatteras Island. Where? Between Avon and Buxton. Between Buxton and Hatteras. On Ocracoke. And here on Pea Island, from the end of the Basnight Bridge down to Rodanthe. Especially here. Ryder is in charge of NCDOT’s Dare County maintenance yards. He wears wraparound sunglasses and a Penn State hat. He moved down from the North in 2011. “I’d rather have sand than snow,” he says. He looks at his phone. “We have so many apps.” Tourists, he says, look at the temperature first, but Ryder looks at the wind and the tides. If the wind’s blowing from the northeast, it’ll push the sand back into the road. If it’s coming from the southwest, it’ll whip the water out of Pamlico Sound and over the pavement. “We can’t win either way the wind’s blowing,” he says.

If you know anything about the Outer Banks, you probably have a sense of the problem here: The sand moves. The road doesn’t. Before the 1950s, if you wanted to drive on the barrier islands, you mostly drove on the sand. But during that decade, most of what we now know as Highway 12 was paved, culminating with the opening of the Herbert C. Bonner Bridge over Oregon Inlet in 1963.

This realization of a permanent road dovetailed perfectly with the idea of a permanent island — a notion that had been born decades before: In the 1930s, there was a belief that the Outer Banks had once been covered in trees and grasses, shrubs and vines. Those plants, it was thought, had held the shifting sands of the barrier islands firmly in place, and so the National Park Service embarked on a huge project to build dunes along the islands to do what they thought nature had once done itself. Of course, nature hadn’t done that; the islands had always moved and shifted as wind and waves blew sand from the ocean toward the sound. But by the time officials realized that, the artificial dunes had already been in place for decades, and they now had Highway 12 to protect. To save the road, the state had to freeze the island in time. 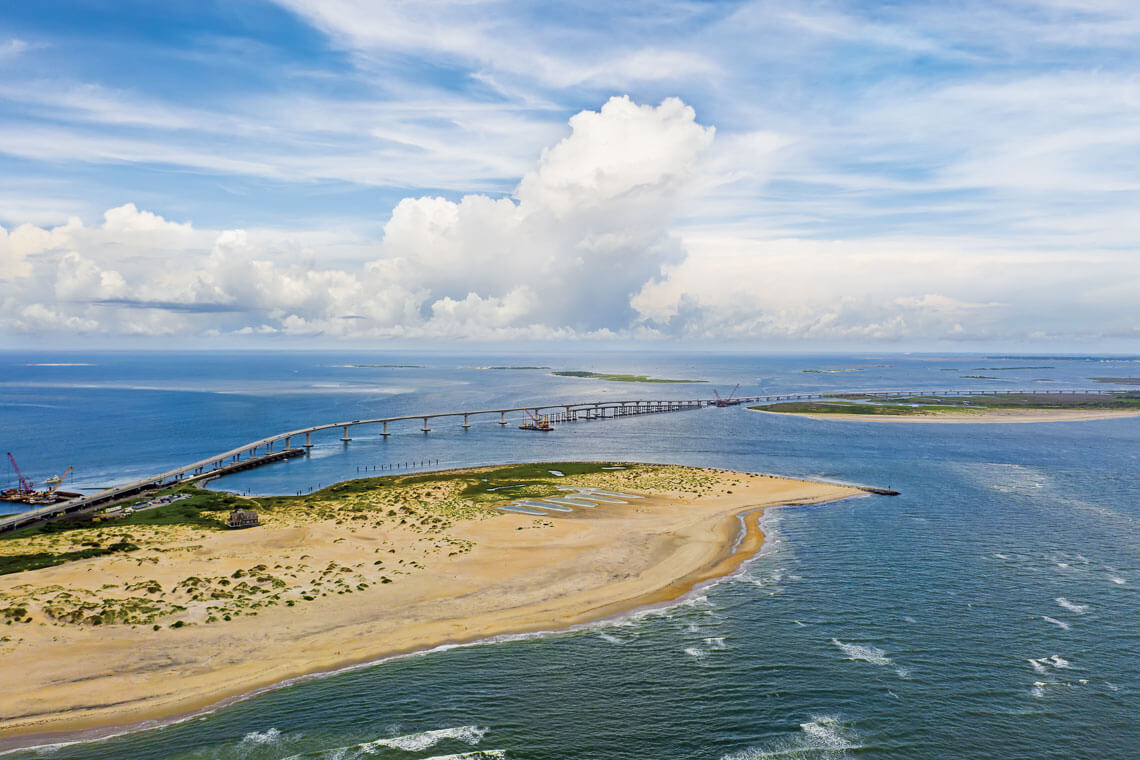 Keeping things exactly as they are takes a lot of time and money, and storms come along and complicate things. It used to be that only hurricanes could cause dunes to break, pavement to buckle, and water to pool, but now smaller storms, too, are poking holes in the islands and creating new inlets. Last October, a nor’easter came through. It was, Jennings says from the back seat, “a storm that nobody had heard of,” and still it wiped out dunes and flooded the road north of Rodanthe. A week later, just when Ryder and his crew had reopened the road and pushed the sand back, another storm messed it all up again. “The island wants to change,” Ryder says, “but we have the road.”

Rebuilding Highway 12 is, and always has been, the solution to a budgetary math problem. It takes money to pay men and women to, on a daily basis, jump on top of heavy equipment like bulldozers and front-end loaders and move the sand back into place. It takes even more money to rebuild the road after a storm, when the tides and winds and surges shatter the asphalt.

The dunes now had Highway 12 to protect. To save the road, the state had to freeze the island in time.

It takes a ton of money to build bridges. In 2011, when Hurricane Irene cut a new inlet (named, you guessed it, New Inlet) north of Rodanthe, the state built a new bridge over the water. (“We’ll do what we always do,” Dare County Manager Bobby Outten said of the breach in the road. “We’ll figure out how to fix it.”) But then the inlet filled back in, so the bridge now runs across … sand. On most days, at least. A few miles south, construction crews are building a nearly two-and-a-half-mile-long bridge out into the sound to bypass an often-flooded area known as the S-Curves. The “Jug Handle,” as the new bridge is called, is expected to cost $145 million. 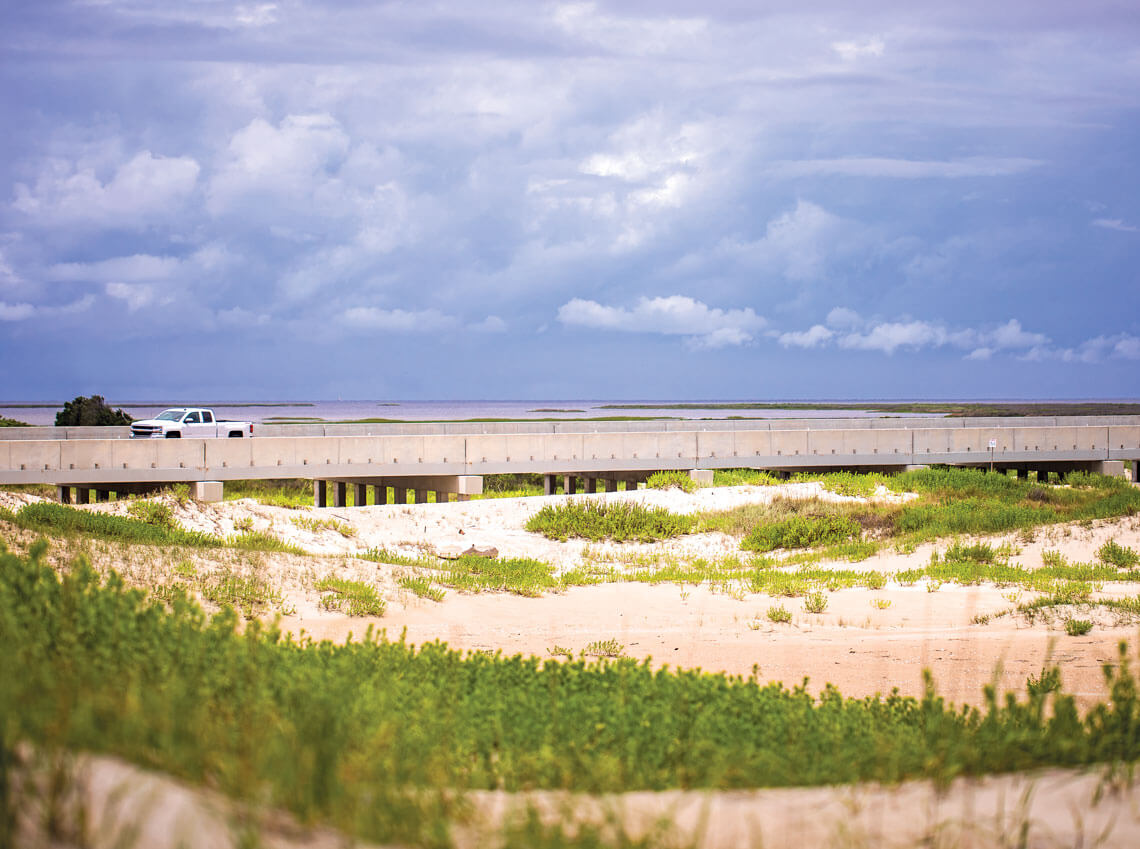 From the Basnight Bridge, head south on Highway 12 until you reach New Inlet Bridge. Some people even call it New New Inlet. photograph by Chris Hannant

But for all of the money spent, the amount of money brought in from tourists and taxes has been much higher, and as long as that remains true, the math will work out for the state and the folks who live here. The bulldozers and front-end loaders will remain stationed at the north end of Pea Island, waiting for the next storm that breaks the dunes and floods the pavement.

When those storms hit, Ryder says, all you can do is react. You can do a little preventative sand moving, he says, pointing out spots where his crews have pushed the dunes away from Highway 12 and toward the ocean. But they can only push so far, since the state’s right-of-way only extends so far from the road. In effect, there’s a tiny space for a dune to exist, smooshed between federal land and the pavement. The result, on one part of Pea Island, is an otherworldly stretch of road, like driving along the canyon valley of a tan moon.

It’s weird being out here sometimes, Ryder says. Sometimes at night, when the sand is really blowing and the water’s up, “you don’t even know if you’re on the road,” he says. When the dunes are down, you can see from the asphalt to the ocean, and it looks like the ocean is above the pavement. “Sometimes, it is,” Jennings says with a chuckle.

At the north end of Rodanthe, the pickup truck passes the sign that welcomes visitors to Mirlo Beach. (“Dare to dream the impossible dream,” it reads.) The heavy equipment is idle today. It’d be better to come out and watch everybody hustling after a storm, Ryder says. That’s when the action happens. But today, the skies are blue and the wind is mild, so the truck pulls into a gas station and turns around, splashing through puddles of standing water in the gravel parking lot.

Back up north of New Inlet, Jennings points toward the sound: A quarter-mile away, small black lines stick up out of the sparkling water and brown marsh. Those are the remnants of an old bridge, he says. Back in 1932 and ’33, storms cut several new inlets through the island here, and the state decided to build three wooden trestles to allow cars to veer off the beach and cross the deep water. The bridges opened in the mid-1930s, but within a few years, the inlets had already started to close, and except for another overwash during World War II, the road was no longer useful. The island, and its beach, was once again continuous. So in 1952, not even two decades later, the bridges were left to the brackish water and salty air. The best thing, it was decided, was to let nature take its course. 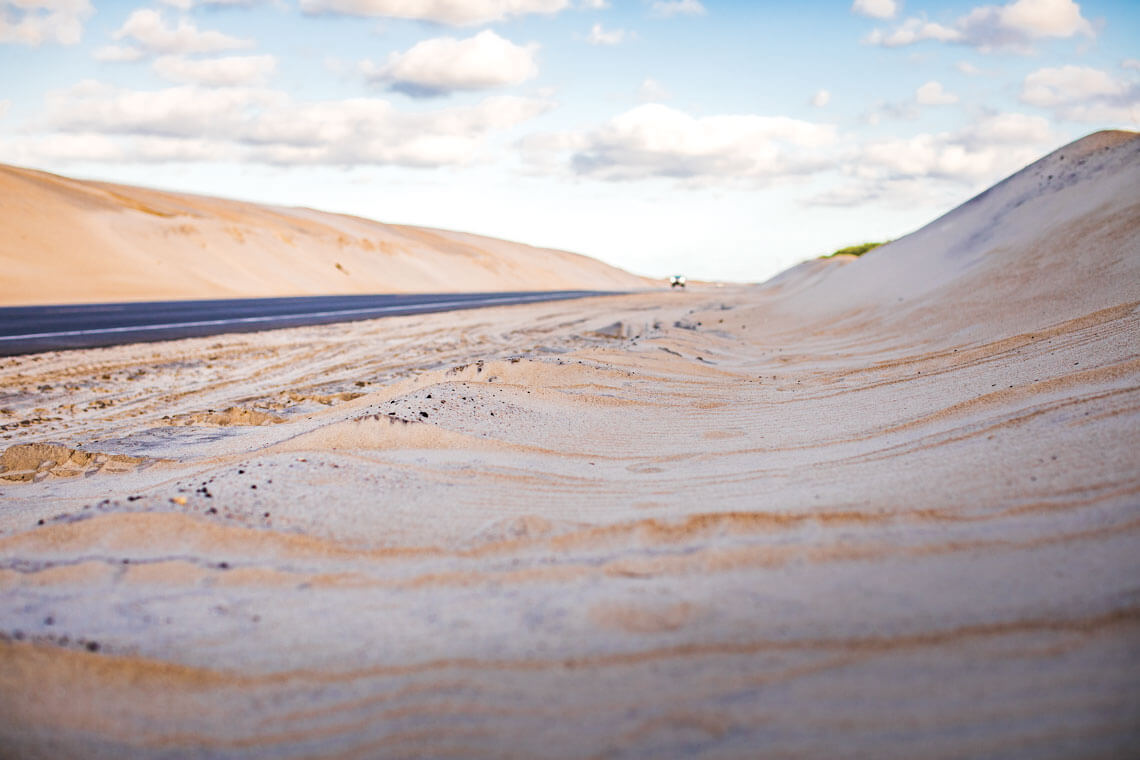 At the north end of Pea Island, the dunes have to fit within the road’s right-of-way, which means that heavy equipment has to pile the sand high in a narrow area between beach and pavement. photograph by Chris Hannant