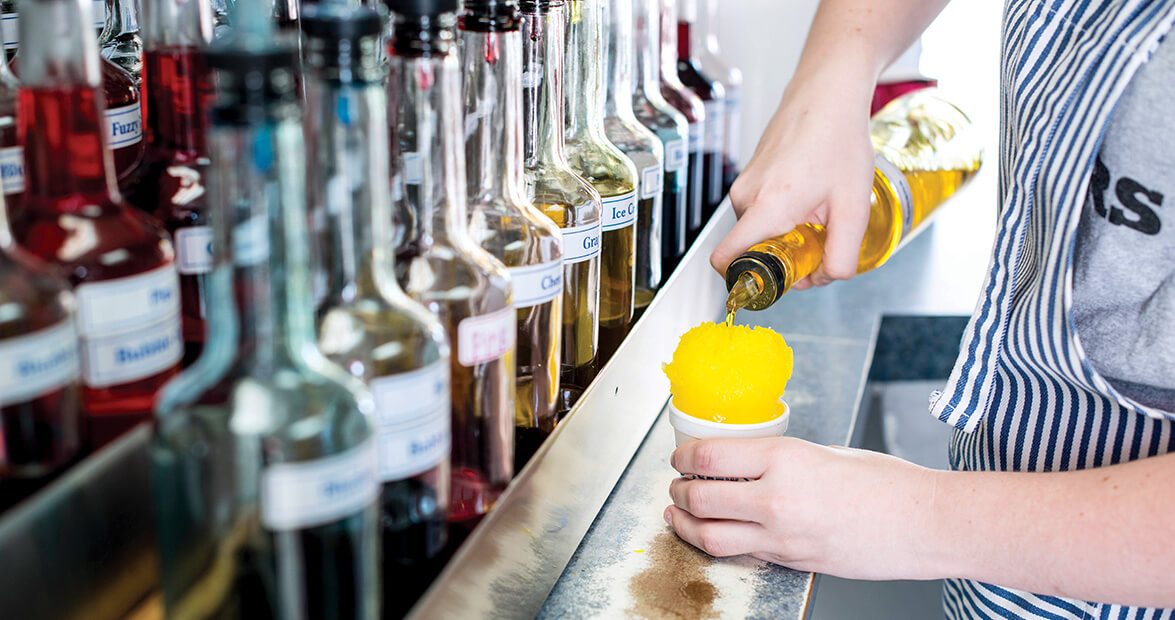 EDITOR’S NOTE: This story was originally published in July 2015.

If you were to unexpectedly happen upon Hills of Snow, you might wonder if you were experiencing a heat-induced hallucination. A mirage. For rising from the heart of downtown Smithfield, next to Emma’s Bakery and Glam-O-Rama Coin Laundry, is a giant blue snowball.

From afar, it resembles a chunky windmill that has somehow lost its blades.

Two straws stuck jauntily in the top form the L’s in “Hills.” An awning over a window on the side shows where to form a line. All around is a collection of palm trees perfectly potted to form a tropical-themed patio, complete with benches and umbrellas.

But the best part isn’t the way the building looks. It’s the snow sorcery that happens within — the ice-cold magic served up all summer long.

In a landlocked town like Smithfield, where most summer weekends the whoosh of beachgoing traffic on Interstate 95 is as close as folks come to a coastal breeze, a little snow wouldn’t be fanciful; it’d be a miracle.

In 1984, Tom Hill — a convenient last name in the snow business — cracked the code. The confection he created was different from the product more commonly referred to as snow cones, the ones that sit atop pointy-bottomed paper cups. 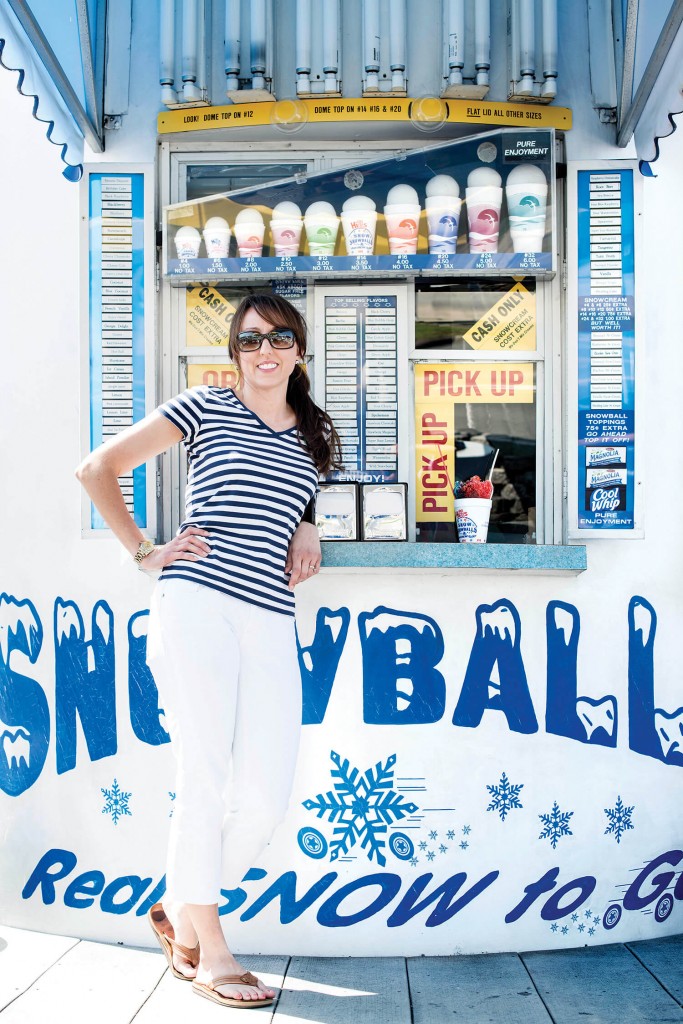 Kristy Hill Hinnant carries on her dad’s legacy, ensuring that every summer, customers can look forward to a frosty treat in their favorite flavor. photograph by Lissa Gotwals

“We call it snow,” says Hill’s daughter, Kristy Hill Hinnant, who, with the help of her husband, Everette, has been running the place since Hill’s death in 2011. “It’s just like real snow. It’s soft; it’s not chunky at all.”

The snowballs were, and are, far creamier than the icy, rainbow-hued version most of us think of when we hear the term snow cone, and they can be licked, spooned, or sucked through a straw as they melt.

Hill first sold the seasonal treat from a more traditional blue, box-shaped building. Just a few years after he opened Hills of Snow, he decided that the blue box needed a more distinctive look, and he personally built the structure that sits at 110 South Bright Leaf Boulevard. It was a building fitting of the sweet snow wizardry he spent his remaining decades crafting. (Today, Hinnant and her staff call it “The Big Ball,” as opposed to the mobile, mini version they sometimes operate at local shopping centers.)

Like any magician worth his wand, Hill kept his recipes and methods well guarded. Hinnant was just 2 years old when her father opened Hills of Snow, and she’s worked there since she was a child, often with her buddies when they were teens. But even she doesn’t know all the secrets of her father’s snow sorcery. Before Hill died, he told her just enough to keep the operation in order, namely the recipes for the syrups they make fresh in a nearby building aptly named “The Sugar Shack.” Only Hinnant and her husband actually make the secret, syrupy brews, up to 30 gallons at a time.

“That gets gone pretty quick,” she says.

When Hill started his business, he offered 20 flavors. There are now 101 flavors to choose from, among them fuzzy navel, pink lemonade, and, around the Fourth of July, the American (wedding cake flanked by strawberry and blueberry). Among the most popular are cotton candy and strawberry, as well as many of the “snow creams” — snowballs topped with sweetened condensed milk. The Magnolia-brand milk goes on in three layers, soaking into the shaved ice to create something akin to the texture of a sherbet. The vanilla snow cream is perhaps their best seller, Hinnant says. Some like to top their treats with a hearty helping of Cool Whip.

When asked about how they turn frozen water into something so light and creamy, she won’t be any more specific than to say that the magic is in the machine.

Many snowball fans wish they could get their fix year-round, but Hills of Snow is only open in the warmer months. Hinnant tries to honor the seasonal hours her father created for their family business: evenings and weekends during the month of March, with weekday evenings starting in April, and much longer hours once schools let out.

But it can be hard to wait. It takes just one not-chilly day to bring people out in droves. 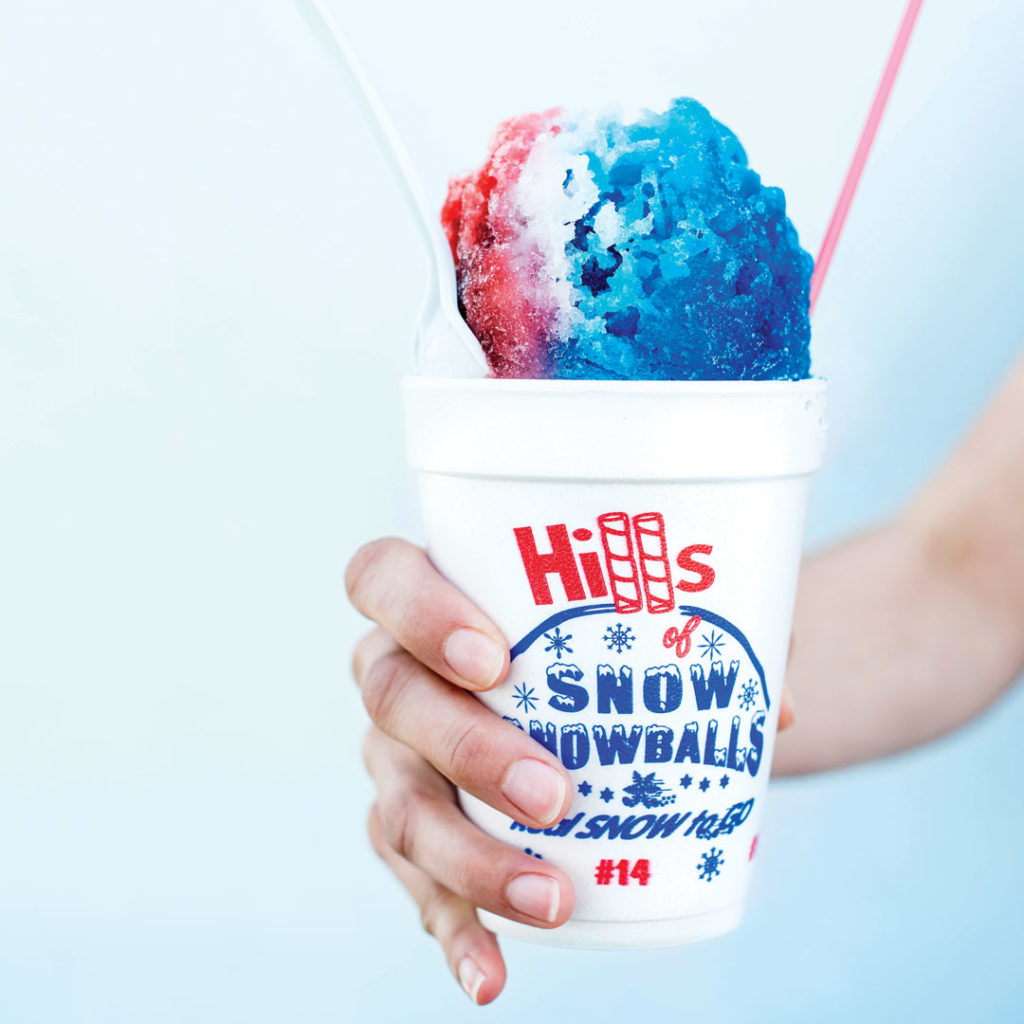 “The American” features strawberry, wedding cake, and blueberry flavors. Make it a #14 — that’s 14 ounces, one of the more middling of 10 sizes — or bigger, if you’re not afraid of a little brain freeze. photograph by Lissa Gotwals

“I tell you, we’ve been so busy. North Carolina in general has just grown so much, and we have been so busy,” Hinnant says. Just before she opened the shop in March, she fielded an estimated 20 phone calls a day from people who wanted to know when they could get the first snowball of the season.

And now, at the height of summer, when the weeknights and weekends blur into one sticky mess, with post-baseball game bliss and it’s-still-light-out-till-practically-10 p.m. mania, not much else satisfies like the magic of a cold, creamy slurp of snowball.

There’s just one last Hill family secret to figure out: What flavor was Hill thinking of when he added blue snow to his building? Blue raspberry, blueberry, cotton candy?