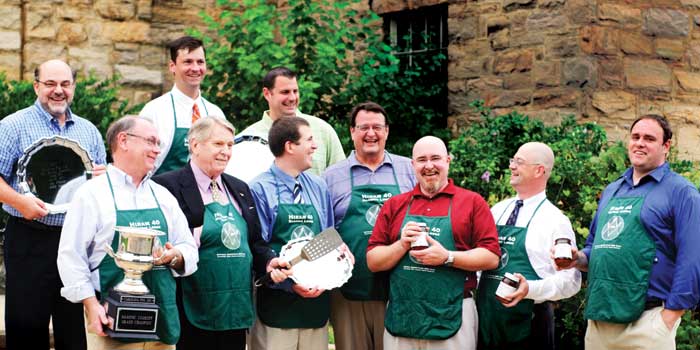 All night long, the Freemasons of Hiram 40 have tended the fire-bellied beast known as Grill-Zilla, the monstrous pig cooker big enough to rent out as a studio apartment on wheels.

They’ve stuffed it full of apple wood and roasted 250 pounds of pork butts. They’ve slept on the pavement while it turned those hog parts into barbecue tender enough to pass for pudding. They’ve carefully slathered it with secret sauce, guarding the secret like a battle plan. And now, at high noon at the North Carolina State Fairgrounds, they’ve loaded a tray full of meaty treasure and passed it on to officialdom — collapsing from exhaustion while they wait for the big moment: judgment hour at the North Carolina Masonic Pig Jig.

“I slept out here on the concrete last night,” confesses Tom Price, Grill-Zilla’s keeper. “Camping without a tent.”

Behind their sauce-smeared smiles, an ancient and mysterious tradition guides the men of Hiram 40. Their fraternity ranks among the world’s oldest, a brotherhood with a history never even committed to paper, a group whose origins are guesswork at best. Just the mention of their name conjures up conspiracy theories extending to the Vatican, control of the world’s banks, and the spooky symbols on the back of a dollar bill — intrigue that seems ridiculous if you join the men of Hiram 40 on taco night.

The handshakes are secret. The ceremonies are secret. And some of the words are secret. But the good deeds are public record. As a Freemason, Lippy can’t invite anybody to join the lodge. If you want in, you’ve got to seek initiation on your own. Even though Lippy’s Masonic roots date back four generations, it still took about a year for him to get into Hiram 40. He spent much of that time memorizing a sort of catechism spoken to him, one-on-one, by another Freemason.

“Nothing gets written down,” he says.

Once a new member joins Hiram 40, he finds out the distance between the Freemasonry described in scathing tracts handed out on the Wake County courthouse steps, and freemasonry as it is actually practiced.

“We’re not actually plotting to take over the world,” Lippy says. “If we were, we’d fix the holes in the ceiling.”
A typical Hiram 40 duty involves taking orphans to watch the Carolina Mudcats play or pulling strings to get them luxury-suite tickets to the Carolina Hurricanes games.

You write greeting cards to all 98 widows of Hiram 40 lodge brothers, letting them know they still have family in Raleigh. You hold a charity walk for research into amyotrophic lateral sclerosis when your lodge brother and best buddy develops the disease.

Most of all, you sharpen barbecue skills. Hiram 40 raises its money on the grill, and when competing against other lodges, it aims to take the grand champion trophy. In this fraternity, meat is serious business. Chicken- and pork-plate fund-raisers often clear $6,000.

“We call this the barbecue brotherhood,” says Page Skelton, who runs the Cackalacky sauce company in Chapel Hill when not engaged in freemasonry. He gestures to his well-rounded brothers under the tent and explains, “We also have a weight requirement.”

Hearing this statement, pit boss Bruce Muhlheim looks up from his plate of pork and asks, incredulously, “You saying I’m fat?”

Like many Masonic lodges in Raleigh, Hiram 40 meets in the Wakestone Mansion off Glenwood Avenue. Built in 1920 by Josephus Daniels, who was secretary of the Navy, U.S. ambassador to Mexico, and the powerful publisher of The News & Observer, Wakestone Mansion is now on the National Register of Historic Places.

The mansion’s white columns and portico could stand a new coat of white paint, and the wooden staircase creaks under the Freemasons’ feet. But the big naval gun Daniels acquired still stands out front and points across Caswell Street, where it reportedly annoyed longtime U.S. Senator Jesse Helms — both a neighbor and a Freemason.

But Hiram 40’s history predates Helms, Daniels, and nearly all of Raleigh. It started in 1799, making it one of the oldest chartered Masonic lodges in North Carolina. Members boast that their brotherhood began the same year George Washington died, and the Daniels mansion is still cluttered with pictures of America’s most famous Freemason — the president who could not tell a lie.

References to Hiram 40 fill the pages of Wake County history, usually because its members aided a waif, a widow, or a wandering tramp.

It kept membership through the Civil War and the Great Depression, keeping up its support for widows and orphans in years when much of Raleigh couldn’t rub together a pair of coins.

Today, Hiram’s long history both boosts and burdens the lodge. It has always enjoyed having “old Raleigh” status, being a lodge for prominent businessmen. Nearly everyone in its ranks grew up with a family member in Freemasonry, some tracing membership all the way back to great-grandfathers.

Tradition can be its own advertisement and its own comfort. Even after staying out all night in a parking lot, catching a half-hour’s sleep in a folding chair, the brothers in Hiram 40 greet their pit boss with a hearty, “What’s shakin’, bacon?”

“It’s a fraternity,” Muhlheim says. “It’s the oldest fraternity in the world.”

These men aren’t drawn by initiation rites, or by learning the rituals only a member can perform. They see people they like and admire, all wearing a prominent Masonic ring, and they want to belong.

To a nonmember, it all sounds a bit like Boy Scouts. You want to wear the uniform and earn the badges. If you’ve ever seen the movie, Peggy Sue Got Married, you remember the scene with the grandfathers in their lodge hats and spooky rites. Once the incantations were spoken, the lodge’s true nature appeared: “Let’s play cards,” the men said. Big secret.

Seventy percent of Hiram 40’s membership is now older than 70, Tom Price says. Out of roughly 225 members, you see about 25 at Monday night meetings. The biggest surge in membership came after World War II, he says, when American soldiers saw Masons get star treatment in Europe. If you went to a pub as a Mason, Price says, the owner took you home.

Membership in Hiram 40 topped 700 when Price joined in 1983. Now, with lodge numbers down by two-thirds, the challenge is to reach young people. Lodges in general are stereotyped as social clubs for white-haired men.

When he joined two years ago, Lippy immediately updated the web site, adding some high-tech polish to an ancient and dusty club. Since then, men in their 20s started coming in search of fellowship.

To a large degree, the point of this club is the club itself. Just belonging. The lodge might turn down somebody with a long criminal record or a chronic alcohol problem, but the stated goal is to make good men better.

Jimmy Hodge lives in Charlotte now, but when Hiram 40’s members sent him a card on his 56th birthday, he drove all the way to Raleigh to join them for tacos. Not a lot of people bother to send a card to a 56-year-old man. So on that Monday night, he joined Price at a folding table, where they debated the merits of various grills.

With or without a secret handshake, Hiram 40 is a club for men and meat. Most meetings start with a ritual and then move quickly to old and new business, an agenda much like that of any other service group. The secrets that matter most are the components of a good rubbin’ sauce.

“Masons are supposed to tell the pope what to do and all that,” Price says. “Well, it ain’t my week to tell him.”

This year, the Pig Jig fell on a tough day for the brothers of Hiram 40.

Only a few days before the competition, they lost their longtime brother and barbecue mentor Ron Page to Lou Gehrig’s disease. Price recalls fondly his friend’s wariness toward Grill-Zilla — so nontraditional — until he tasted the results.

Under their tent, they talk about Page’s slow demise, about how he couldn’t rise from his wheelchair at the end. The mood at the Pig Jig turns somber.

But the men’s spirits pick up quickly once the judging finishes. Hiram 40 takes the grand champion prize for the second straight year, also notching first place for its sauce. Much rejoicing and picture-snapping ensue.

The Masons repeat the lodge motto: We came. We cooked. We conquered. Then, with bragging rights preserved and charity served, the men of Hiram 40 lay down their forks, pack up Grill-Zilla, and part as brothers.

Josh Shaffer is an award-winning writer who works for The News & Observer in Raleigh. Josh’s most recent story for Our State was “North Carolina’s High Road” (October 2011).