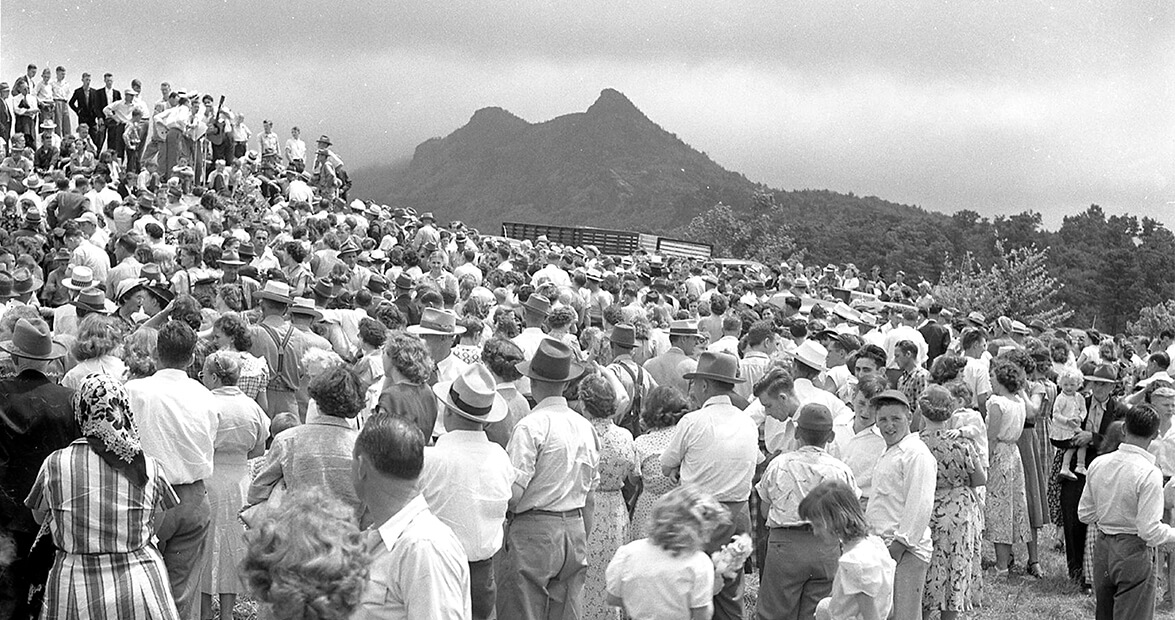 Because for more than 90 years, the Singing on the Mountain gospel convention has been as good a place as any to find preaching, four-part harmonies, and even a Holy Ghost tent revival, all in the same place, and often at the same time. It’s where spirit-led people from North Carolina and well beyond have come to be “Nearer, My God, to Thee” — with plenty of sweet tea.

“Grandfather mountain, with its lofty peaks towering toward the heavens and its early Summer dress of bright colors, is an ideal location for such an annual gathering,” photographer and writer Max Tharpe wrote in a 1951 story for the Greensboro Daily News about the 27th annual Singing on the Mountain.

“Looking out from its highest points,” he continued, “the breath-taking panorama of many hundreds of soaring peaks gives many visitors a feeling of nearness to God and a detachment from earthly problems that seem to fade into the blue haze that blends into the horizon.”

In “the Singing’s” earliest years, God-fearing people from the nearby mountainside arrived here in droves — by wagon or, more often, on foot. They blanketed the rolling hills and shady groves and rock outcroppings that surround the base of Grandfather Mountain as they settled in for the day. Children and teenagers would climb the rocks. Ladies perched on logs. And the mountain people — men with their scraggly beards, bonneted women smoking pipes — would wander about the grounds.

Folks were fed by the hundreds — by the “multitudes,” organizers were apt to say. Picnic plates overflowed with country ham biscuits. Homemade pies and cakes were set out on mismatched floral tablecloths. Mason jars were filled with tea and lemonade, and watermelons rested beneath long serving tables until it was time to split them open. Meals provided by Sunday school classes were spread out family-style for all to share.

Arriving at the Singing on the Mountain felt like returning to family.

In later years, farm trucks with wood-slat rails — some loaded with Sunday school classes, others with large families — filed into the meadow, and their passengers piled out as the sun began its journey across the sky. Out-of-state travelers might arrive by charter bus, as they still do on occasion. Regardless of how far one traveled, arriving at the Singing on the Mountain felt like returning to family.

“One lady from Atlanta, Ga., said it was the best convention she ever had attended,” wrote founder and chairman Joe Lee Hartley in a diary entry chronicling the details of the 1927 program, “and she wanted me to keep it going.”

The Singing on the Mountain program begins early, before 9 a.m., with music and prayer. Song is punctuated by a midday sermon, and then, at day’s end, the convention closes with a benediction and a final song.

The first year of the event was more of a family reunion than a full-fledged convention, according to Dave Haney and Lisa Baldwin, authors of an essay about the festival and its longtime photographer, Hugh Morton (who was also an owner of the land where it was held).

Logs kept by Hartley also reveal an event that grew in apparent favor, even as it grew in popularity: In its first 23 years, if the day involved the Singing on the Mountain, then “the day was beautiful.” Not a drop of rain fell in more than two decades of fourth Sundays.

During the gospel convention’s heyday, in the 1960s and ’70s, those who came to offer prayer and praise included some of the most notable names in television and musical entertainment.

During those years, more than 25,000 attendees would regularly “set the slopes” at Grandfather Mountain for preaching, singing, praise, and fellowship. Until, in 1962, the Rev. Billy Graham preached. 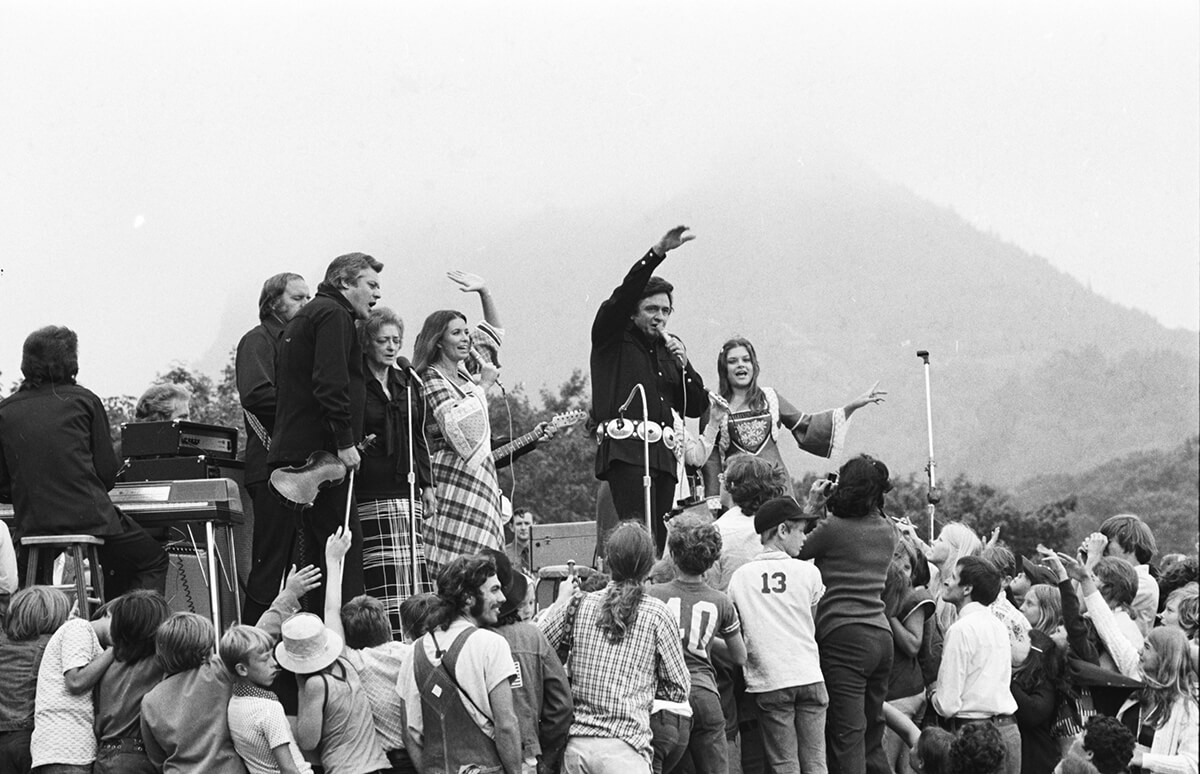 Depending on whom you ask or what newspaper you read, somewhere between 100,000 and 200,000 came to hear Graham’s sermon, which admonished listeners to seek out a lifting of life’s burdens and start anew. Women in long dresses; men in suits, ties, and suspenders; and children in crisp white shirts meandered between stages and amplifiers to hear the Word spoken and sung — just as they had in the decades before, and just as they would in the decades to follow.

Among the tens of thousands of faces turned skyward in the convention’s earliest years was the Rev. Shelby E. Gragg’s. According to the “History of the Great Singing on the Mountain,” the preacher and gospel singer from Watauga County was as much a fixture of the event as Grandfather Mountain itself. Gragg and his long white beard meandered among the revivals and refrains of the old-time gospel gathering.

Morton was another familiar face. He began photographing the convention in 1946, and his images helped propel tourism toward the mountain.

And then there was Hartley — a farmer, fire warden, and trailblazer. By the time he died in 1966, he had shared the stage with some of the most prominent performers, ministers, and public figures of the day. That year, the Watauga Democrat ran an article about the event carrying on in Hartley’s absence.

“The slogan which was developed for the ‘Sing’ by ‘Mr. Joe’ remains in effect,” reporter Frank O’Brien wrote. “‘Whosoever Will May Come.’ … Hartley died in February at the age of 95.”

He did the work of the Lord. Until he marched onward, a Christian soldier to the end.