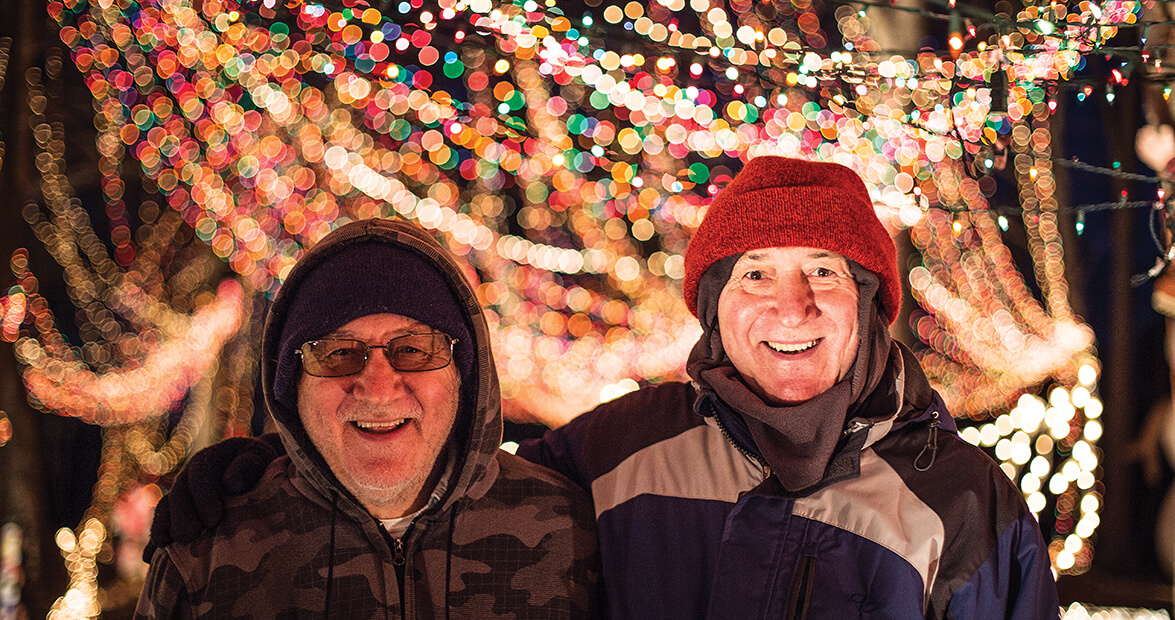 Herman Hoggard works a Christmas elf’s hours. Even in August. On a balmy Sunday morning, his mind is already mapping out where he plans to put new additions to his Christmas show.

He walks along a gravel road, talking excitedly about how he found an inflatable Grinch on eBay. It was a crucial missing piece. “Every kid wants to know where the Grinch is when they show up,” he says.

But the crown jewel of this year’s new acquisitions might be the inflatable African-American Santa Claus. Herman says the black community is a big supporter. He wants to make sure they feel represented. He’ll add the new Santa to the more than 350 holiday scenes depicting everything from gingerbread villages to polar bears. “We cross all denominations and ethnic groups,” Herman says. “We wanted to make sure no one was left out.”

The Hoggard brothers — triplets Herman, Therman, and Sherman, born 30 seconds apart — have had Christmas on their minds all year long for two decades now. Every year, they shut off the lights to the Hoggard Christmas Wonderland of Lights after New Year’s Day. They light them up again on the following Thanksgiving. In between, Herman and his brothers think about Santa.

During the holiday season, more than 550,000 lights cover the eight-and-a-half acres of land outside of Therman’s house in Windsor, a small town in Bertie County. Putting on the light display is a full-time job, one that Herman and his brother Therman do for free for thousands of visitors every year.

“My holiday is the happiness it brings every year,” Herman says. “Instead of one day, we have 30 days of Christmas.” 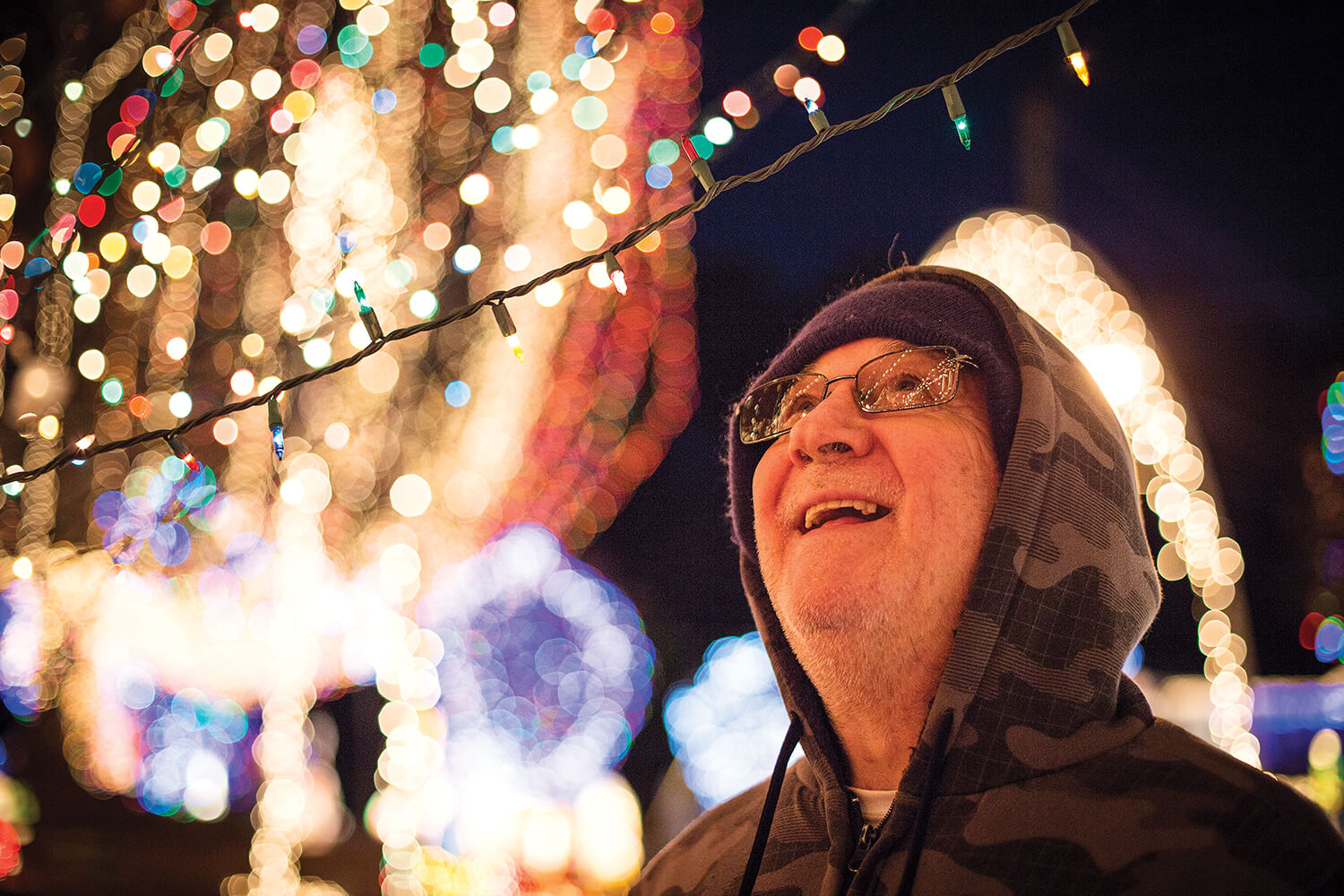 What’s it take to turn night into day in Windsor? About a half-million tiny lights. photograph by CHRIS HANNANT

Herman has his workshop under a little carport next to Therman’s house. Therman was hospitalized for a heart condition in March, so Herman has been preparing for this year’s show by himself. The months leading up to November are filled with tedious work — painting, wiring, and building. Earlier in the week, Herman spent seven hours putting lights on a wire “Merry Christmas” sign.

In the middle of the carport, a small table is covered in dry paint; the reds and greens of the holiday season have mixed together into black. The surrounding tables are littered with painting supplies and tools. A boom box pumps out a steady stream of mid-tempo rock music as Herman threads wires through a newly-painted white wire candy cane. It’s a humdrum task.

“I love it,” he says. “Being able to see something come to life during the Christmas season is why I do it.”

There’s evidence of Christmas strewn about the property. Fake snow from inflatable globes covers the ground in the pine forest around the house.

A homemade miniature Ferris wheel stands next to the driveway. The latticework of a train engine sits in a clearing across from the driveway. As Herman walks the route, he points out where the lighted arches that open the tour will attach to the fence, and where one of three nativity scenes will be set up.

Just behind Therman’s house is a trio of homemade plywood sheds, each packed full of Christmas decorations. Herman pulls the door to reveal painted Santas and other silhouettes. Another shed is full of inflatables. The last one holds assorted wooden cutouts. Taking a newly refurbished snowman from the wall, Herman shows how he drilled a small hole for the more than 100 lights used to illuminate it. Herman makes about 15 new cutouts a year.

“Everything is hand-made,” Herman says. “I have the knack for really making them real.”

The Hoggard brothers’ light display started in 1995 as a wooden angel at the end of Therman’s driveway. It was carved in memory of Therman’s teenage daughter Carolyn, who was killed in a car crash in 1991. She was just 16. She loved Christmas. Herman says the display was part of his brother’s healing process. “This was a way to honor her,” he says.

Therman, his wife, Nancy, and his daughters Jennifer and Nickie used to decorate the house and set up the angel. Nancy still decorates every room in the house with Christmas knickknacks. Over time, the display grew. Meanwhile, Herman was putting on a similar display near Richmond, Virginia. In 2004, after Herman returned to Windsor, the brothers merged the displays. 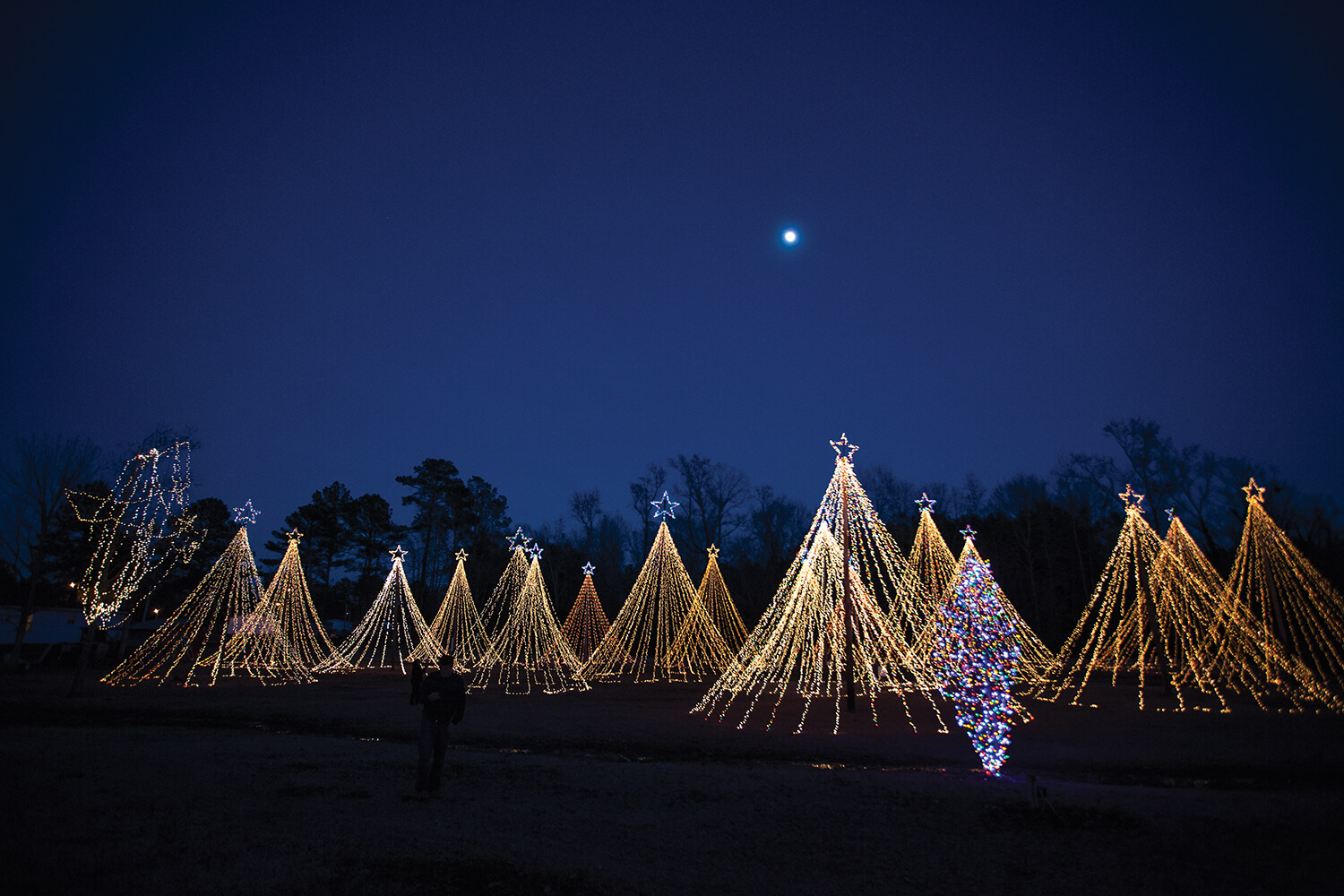 By day, they’re just poles. But by night, the lights and stars turn them into Christmas trees. photograph by CHRIS HANNANT

All year long, ideas pop into Herman’s head for new silhouettes, or for ways to improve the show. Herman talks about one change he made, as he stands in a thicket of telephone poles stuck in the ground in the backyard. The poles have strands of lights strung from the top to the bottom, flaring outward toward the ground. They’re supposed to resemble Christmas trees when lit, but not everyone figured it out. “We added the stars last year,” Herman says. “They were a big hit. People were so excited. They kept asking when we added the trees, but they’d always been out here.”

Starting September 1, Herman works between eight and 10 hours a day to set up the displays. He drives 700 stakes into the ground to hold the 350 silhouettes. He runs more than 1,400 extension cords. Family and neighbors usually help, but this year was more difficult. Therman couldn’t help. Sherman had knee replacement surgery in October 2014, but was able to pitch in a little bit.

For Herman, all the work is worth it when he greets that first car and sees the faces of the children. “I spend 12 months out of the year working on Christmas,” he says. “It has become a full-time job I love to do.”

The show’s popularity has steadily grown, thanks to Facebook and YouTube. At least a half-dozen videos show the lights, and you can hear the gasps and excited squeals of the onlookers as they drive by the house. Visitors have come from as far as India and Australia, Herman says.

On Friday and Saturday nights, the lights are on from 5-10 p.m. Sunday through Thursday, the lights burn from 5-9 p.m. The Hoggards don’t do it for money. Herman greets every car — sometimes dressed as an elf — and collects donations, which help pay for electricity and the upkeep on the decorations.

Herman always feels both sad and relieved when the lights go out for the last time each season. “That means we’ve made it another year,” he says.

Each year gets tougher. Herman plans to continue the show, but he and his brothers are now 66 years old. “Once we get to the age we can’t do it anymore, it will die,” Herman says. “It will be a very, very sad day. I am hoping the good Lord will give me the strength so I can continue to do it.”

This year won’t be the last year, though, because Christmas is a time to be with the ones you love, whether they’re your brothers, or the kids and parents who come to see the Hoggard brothers’ display. Herman has no children of his own, and the Christmas light display has filled a void. “This,” he says, “has been my family.”