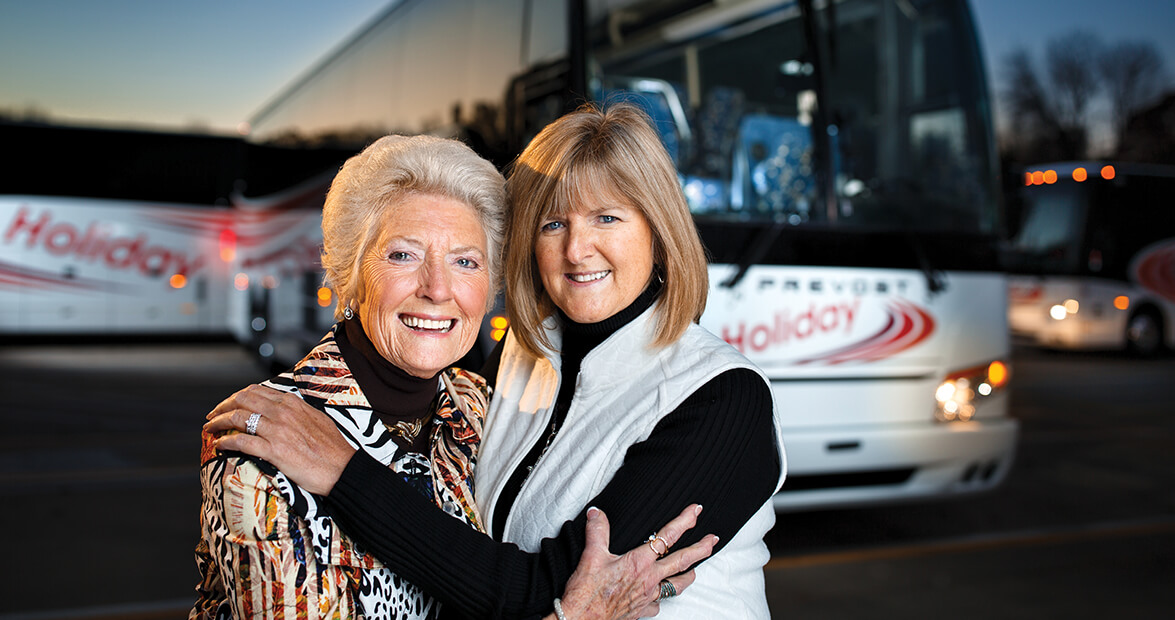 Biltmore to the Badlands. Graceland to the Grand Canyon. And an average of 115 additional weekly departures to anywhere a highway leads, plus plenty that lead to a cruise ship’s gangplank, and the twice-weekly runs to Harrah’s in Cherokee for that spontaneous (or routine) urge to play blackjack. This is Holiday Tours in Randleman, whose 72-strong motor coach fleet covered 3.36 million miles last year.

Well, not quite Randleman. Make that Level Cross. “One stoplight and two churches,” Rhonda Moody says, laughing. Rhonda, 56, is Holiday Tours’ office manager, director of marketing, co-owner, and — she laughs again, and gives up trying to list all her jobs. Nepotism is not an issue at Holiday Tours. Her husband works here. Both their sons work here. Her brother, a half-owner, works here. Her grandmother was still leading tours in her 80s. Rhonda’s mother’s home also serves as the operations center. It’s no wonder Holiday’s mission is to make you feel like family. This has been a family business from, well, first gear.

“Mom loved to travel,” Rhonda says of her mother, Nancy Thompson. “Loved it.” Nancy’s husband, Dwight, was a driver for a tour bus company in Asheboro, and with Nancy guiding his tours, customers began asking specifically for the Thompsons’ schedule. The couple decided in 1978 to just buy their own bus. Nancy wanted every trip they took — Nashville was the first tour; a single sheet of paper described the others — to feel like a holiday. No surprise, then, that the first two buses bore the logo “Nancy and Dwight’s Holiday Tours.” Two buses became five, five became 10; their daughter Rhonda left the University of North Carolina at Greensboro for a semester to help out (“I was working 9-5 in the office and cleaning buses ’til midnight,” she says), never went back, and … you get the picture. 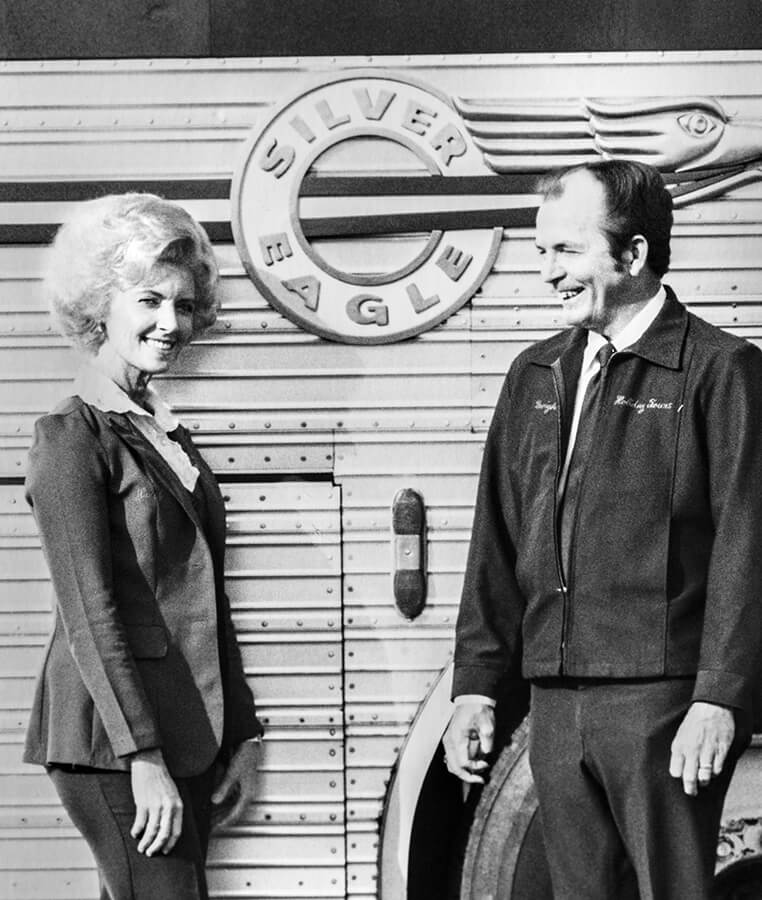 When Nancy and Dwight Thompson started Holiday Tours in 1978, they leased buses from other charter companies. They bought their first bus in 1980, and today the Holiday fleet is 72 strong.

“Who wants pound cake?” No, it isn’t a passenger’s birthday. It’s Deanna Hurley’s specialty. Deanna is one of Holiday’s 17 tour directors. One tour director was renowned for her fudge. A few others team with their driver-husbands for tours. All were tour guests before they ever became tour directors. All are compassionate and organized, love people, and can think on their feet.

Two rows ahead, Deanna asks, “Want me to do that for you?” and proceeds to set a passenger’s smartphone alarm. “Do not worry another minute,” she assures a guest whose throat aches. “We’ll find you a doctor.” If you’ve never seen the White House in person, or if you’ve lost a spouse, or a pet, or need to be drawn out, Deanna knows, or soon will. It’s her job, and it’s her vocation.

The pound cake comes down the aisle, along with ice-breaking questions and jokes on the mike.

It’s fine to simply enjoy the passing scenery, or snooze in the expansive seats, but before long, your fellow passengers feel like family.

Whether you’re on your first Holiday experience to Airlie Gardens or autumn in Vermont, it’s fine to simply enjoy the passing scenery, or snooze in the expansive seats, but before long, the mother and daughter beside you, the couple celebrating retirement a few rows back, feel like family. “You have 50 people who don’t know each other, and your No. 1 goal is to make them mesh,” Rhonda says. Deanna, a tour director since 2010, agrees: “We’re like the mother of the bus. You have to go that extra mile, go above and beyond with kindness.” The bus hisses to a halt for a scheduled stop. “If you get separated, just look for a Jedi!” Deanna calls. All Holiday tour directors wear a signature red blazer or vest. Deanna also carries a red Star Wars lightsaber. Hard to miss in a crowd, for sure.

Even though Holiday takes passengers on tours from the 9/11 Memorial and Museum in New York City to Yellowstone National Park, 95 percent of their business is charter: church groups headed to the Billy Graham Library. Frat brothers headed to roulette tables in Atlantic City. Business executives headed to the golf courses in Pinehurst. Bridal parties headed for the altar. “If you need to move a group of people, that’s what we do,” Rhonda says.

The U.S. military moves troops and equipment on Holiday buses. The Navy Band Sea Chanters toured the country one summer, stopping and performing, in a Holiday bus. After Hurricane Katrina, Holiday buses moved displaced New Orleans residents to shelters in neighboring states. Amtrak and airlines have Holiday on speed dial, to take care of passengers when the best-laid plans of planes and trains go awry. Holiday buses have transported Presidents Clinton and Obama’s retinues and reporters; photographs taken on airport tarmacs record the brushes with political celebrities.

Niagara to Savannah. Balloonfests to inaugurations. Holiday drivers, part-time and full- (which include state troopers, police officers, and husband-and-wife teams), love the job as much as the tour directors. “It gets in their blood,” Rhonda says. Some sleep in the “Hotel Holiday” — four private rooms located on-site in Level Cross — while waiting for their next trip. Al Johnson, who drove for 30 years, amassed 1.6 million safe miles. His achievement is commemorated on a plaque inside the bus — there are plaques for every 100,000 safe miles traveled.

Nantucket Island, Massachusetts, to Mackinac Island, Michigan. Nancy and Dwight’s single page of trips from 1978 is today a thick, glossy booklet of destinations. The Grand Canyon trip is always full. The Penn-Dutch trip to the Amish country sells out often. Here in North Carolina, the lighthouse tour — to all seven — is, perhaps not surprisingly, the perennially popular trip. From infants to 90-somethings, from the Peaks of Otter to the Panama Canal, Holiday has them on board. How lovely, in this insular, contained environment, where the windows are big and so are the seats, where someone else is keeping track of the gas, and directions, and tonight’s reservations, to recline and nap, or gaze down on those belted-in drivers below you, and daydream instead. How long ’til we get there? Shrug. Settle. Snooze. Who cares?