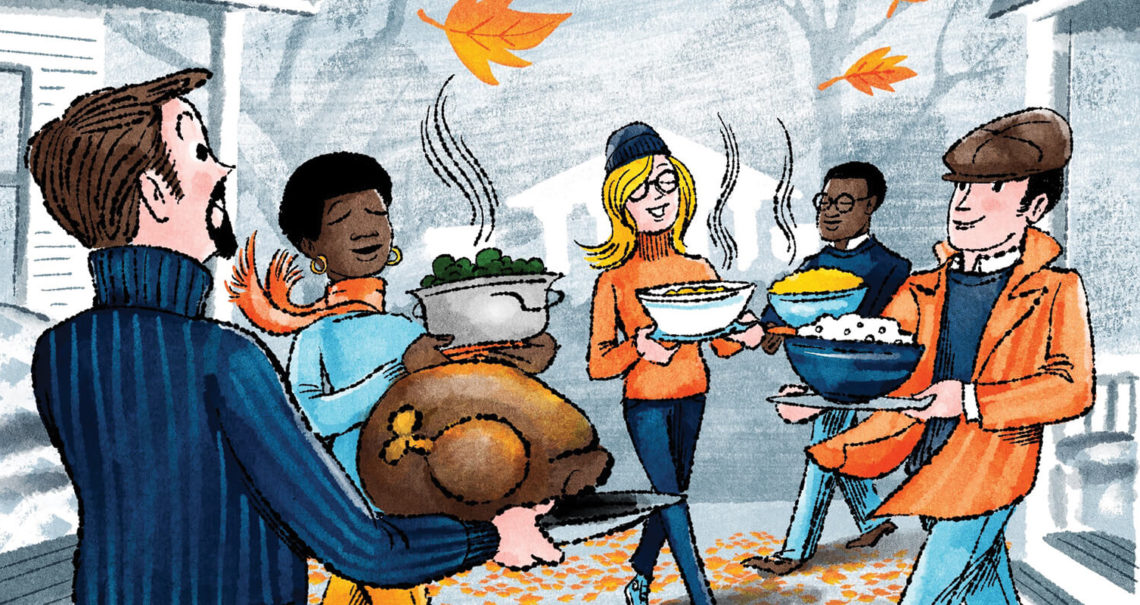 We called it the pre-Thanksgiving Thanksgiving. We thought we’d invented it, but we were brand-new graduate students — freshly arrived in Greensboro and trying to be writers, so we thought we’d invented everything. But the truth is, my mother had conducted pre-Thanksgiving Thanksgivings for years. When I was a kid, we celebrated the holiday proper at both grandparents’ houses in Tennessee (dinner at 6 on my dad’s side; dessert at … midnight? if we were lucky? on my mother’s), and she wanted a Thanksgiving of her own. We ate another full meal, then, the week before, with sides that my parents chose: simple sweet potatoes, green beans or asparagus, stuffing their way. A simpler meal. Less high church, more turkey on the grill.

But: grad school. We were 25, and as it was for my parents with their own young family, the idea of where or what home might be was shifting. Some of us were starting to wonder if our writing program might be a kind of home, or if our slope-floored, one-bedroom College Hill apartments could be. That first fall, we’d learned fiction and poetry, and also that evenings could be spent with cocktails on front-porch sofas — real sofas, upholstered sofas, sofas that would eventually touch off a sofa war with the neighborhood association. The people on those contraband sofas were beginning to feel like family. What we all took for catechism that fall, two Saturdays before Thanksgiving, was that we wanted some big bash just for us, one where we could celebrate whatever we suddenly were to each other, whatever we were becoming in those intense first few months of school.

We did not set a table. The potluck party spilled across two or three apartments and out into the street. Jill brought a silken pumpkin soup. Terry — who had acquired a smoker, and so took the lead on the bird, though he let me copilot from about 6 in the morning — made 20 pounds of homemade mac ’n’ cheese, breadcrumbs on top. Ann and Martin brought beans with Hatch chile peppers in them — they were from New Mexico and had the peppers shipped. I made pearl onions in cream, a dish I don’t even like very much, but one so strange and limited in my own family to Thanksgiving that it became a sort of rhyme for the holiday.

Tita didn’t bring anything. She had not yet moved to Greensboro from Miami, would not join the writing program until the following year, would come not to the first but the second Carr Street pre-Thanksgiving Thanksgiving. We would get married nine years later.

Maybe somebody made a toast. Maybe there was something like a blessing. The party, as parties often did in those years, stretched well into the night. It was precisely what we would have hoped for, had we been old enough to know to hope for it. It was a proper Thanksgiving. People laughed and cried and held on to each other and drank terrible wine and ate almost everything and eventually wandered home, mostly without their dishes. Two people definitely left without their serving spoons. I tried, but failed, to reunite the spoons with their owners. When they went unclaimed, I kept them.

I have used these spoons on Mother’s Day for scrambled eggs, and on or about New Year’s to serve potatoes with a standing rib roast I’m fond of cooking to ring in the new year, but I like them best at my own young family’s Thanksgivings, pre- or no. One year, we had the whole family here for the holiday itself, my brothers and all of our kids at tables set end to end, running from the open kitchen to the living room. One year, we served my parents a very simple turkey and greens a few days early on their way from Atlanta to Virginia. One year, we celebrated with just the four of us, a simple bird and stuffing and who knows — the kids were little then, so it might have been Gerber.

Thanksgiving is a season, a state of mind. It can be a November Saturday night.

I tell our boys the story of the spoons every time we get them out — that I know where they came from, but only vaguely. We grad-school kids were thrift-store hunters then, and our apartments were often passed down with spoons and such left in the drawers. No telling whose these were. No telling whose they were before that. But they’re ours these days, and they’re a thread-thin link to another time, a time before I knew your mom, before I ever imagined what it might mean to give real thanks.

Or maybe this: Maybe they’re from a time when I was just learning what my parents already knew. Maybe these spoons are from the first party where I truly understood that Thanksgiving is very much a season, a state of mind. That it can be a November Saturday night. Two spoons rattling in the dishwasher. A holiday we’ve just celebrated, and one that’s just around the corner.