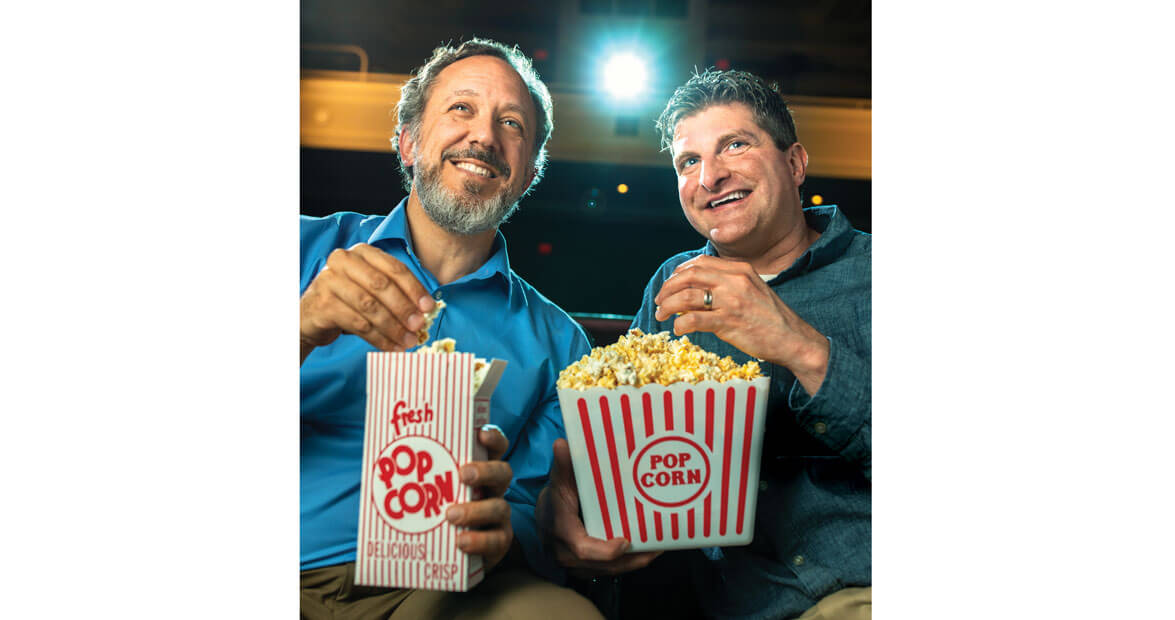 On certain weeknights in downtown Hickory, you might sit at the curved bar inside the Crescent Moon Cafe and overhear impassioned conversations about Dames Judi Dench and Maggie Smith over your tempeh tacos. Around the corner, at Hatch Sandwich Bar, folks on their way to the movies might be pairing their pork belly Cubans with heated discussions about whether Gary Hart should have dropped out of the 1988 presidential race, and whether Hugh Jackman did a good job playing him.

In other words, these are members of the Footcandle Film Society — and if you’re looking for movie recommendations, they’re the people you want to sit next to. “Everybody knows there are certain restaurants in downtown Hickory that are filled with people getting ready to come to our films,” says Alan Jackson, who cofounded the society with his friend Chris Frye. “Wednesday and Thursday nights — those are Footcandle nights.”

Since 2007, Hickory cinephiles — and people who didn’t even know they were cinephiles until Footcandle came along — have gathered monthly at the historic downtown Carolina Theater to watch the year’s finest films, from Best Picture winners to provocative indies. Afterward, they stick around to swap opinions with Jackson and Frye, two longtime movie buffs who had grown tired of driving to Asheville or Winston-Salem to see the films they cared about.

“I still remember people telling us, ‘I just don’t think Hickory can support an art film society,’ ” Jackson says. For a while, those people were right — Footcandle’s first event, a revival of Close Encounters of the Third Kind, was a dud, and Frye and Jackson used their own money to keep the society afloat for two years. What turned the tide was a 2011 screening of eventual Best Picture winner The Artist. Since then, the film society has swelled to include 600 members, who gather at three screenings each month in Hickory or in nearby Newton, at the Newton-Conover Auditorium, and then chat about the movies after. “People started realizing that there were a lot of films we weren’t getting exposure to here in this town,” Jackson says. “And this was before Netflix. But even with those services, we’ve found that people weren’t sure how to find the films that were really interesting.”

Peg Hites spent 33 years living in Southern California, but she had never lived in a town with a film society before she and her husband moved to Hickory in 2008, just as Footcandle was getting off the ground. “It’s so funny to us that we lived in the film capital of the world, and there was never an opportunity for this type of film society until we came to North Carolina,” says Hites, who has since become a Footcandle board member.

Dick and Norma Frank call themselves “charter members” of the film society. They’ve watched the group grow from “not even filling up the small balcony of the movie theater,” as Norma puts it, to a club that now has a 150-person waiting list. According to Jackson and Frye, some people stay on the list for two or three years before a spot opens up.

But the Footcandle experience is no longer limited to those hotly anticipated monthly events. In 2015, Jackson and Frye decided that Hickory didn’t just deserve to see the best films from elsewhere — it should be a film buff’s destination in its own right. Now the Footcandle Film Festival, held in late September in Drendel Auditorium, brings filmmakers from around the world to introduce local audiences to new stories. The filmmakers, meanwhile, experience a level of hospitality that Sundance could only dream of.

“I had the best screening ever in Hickory — including all around the globe,” says Barnabás Tóth, a Hungarian filmmaker whose short film Chuchotage won the best narrative short film prize at Footcandle before going on to make the short list for the Academy Awards. His two days in Hickory included a trip to a local college football game and countless conversations with friendly residents. “People were so open and so curious about where you come from,” he says. “I think the hospitality is the first thing you notice.”

Los Angeles-based filmmaker William Stribling’s short film Down in Flames played in more than 30 festivals in 2014 and 2015 — from Hawaii to Tampa — but Footcandle was one of the few he made it to in person. “Getting a chance to visit a new place and be in the room when a crowd full of total strangers watches my weird movie was a hard opportunity to pass up,” he says. When he arrived in Hickory, he fell hard for the Hickory Museum of Art, where the opening night reception was held. The Olde Hickory Tap Room charmed him with local beers on tap, and, he adds, “the pewter mugs hanging from the ceiling are just too cool. What’s not to love?” The Snack Bar restaurant offered another taste of the local scene. “I live in LA now, so it’s rare that I get to eat breakfast in a place where everyone knows everyone and your breakfast costs five bucks,” he says.

The next year, when Stribling’s film Bear With Us was ready to play at festivals, Footcandle was at the top of his wish list. “I was really impressed by everything Chris and Alan had put together,” he says. “Those dudes really love movies, and it shows. They curate a sharp festival: a very small selection of films that were selected with care, and you know you’re in for something good.”

“There were a lot of films that we weren’t getting exposure to in this town.”

Tóth remembers the Footcandle audience laughing at his film, a comedy about two translators flirting with the same woman, in moments he didn’t even expect laughs. Stribling, on the other hand, says that for Bear With Us, “I don’t think that crowd really knew what they were getting themselves into, so it was a lively Q&A afterward.” Both reactions, though, are exactly what Frye and Jackson hope for. “Nothing thrills me more than watching a film with an audience where everybody’s able to share in laughter or suspense or emotions,” Jackson says. “You feel like you’re part of a larger community.”

And while they want everyone who sees Footcandle films to like them, sometimes dissent makes the experience more interesting. After one festival screening of the 2015 movie The Fits, Jackson remembers a man standing up during the discussion and saying, “I’ll tell you right away, I didn’t like it.” At the closing dinner the next night, the same man approached Jackson in the buffet line. “I just wanted to let you know, I listened to everybody who talked in that conversation,” Jackson remembers the man saying. “I’ve thought about it, and I still don’t like the movie, but at least I understand what the filmmaker was trying to do.” That conversation, Jackson says, is “a win any day of the week.”

For Hites, who, like everyone else, watches plenty of movies at home on Netflix, the post-screening discussions bring back the community-building powers of film that seem lost in the streaming era. She describes the film festival as “a weekend retreat with film as the topic. And the added opportunity to meet the filmmakers and to talk to them about the process, what motivated them to make the film, technical things like getting funding and putting it together — that takes it to a whole new level.”

There were more than 300 submissions for the 2019 festival, which a nine-member selection committee reviewed and narrowed down to a slate of roughly 30 films. “I look for creativity and humor, or a story that needs to be told — like social justice,” says Tom Lundy, a selection committee member. “I enjoy foreign films, too, which give a glimpse into other countries and cultures.”

Frye and Jackson also want to shine a spotlight on the film work being done close to home. To that end, they launched the Footcandle Filmmaker Grant Program in 2018, which takes all of the ticket sales for the festival and awards them to up-and-coming filmmakers; the only requirement is that at least 50 percent of the film’s production takes place in North Carolina. “It can be any kind of film,” says Hites, who serves on the grant committee. “The whole purpose is just to lift up and encourage North Carolina filmmaking.” 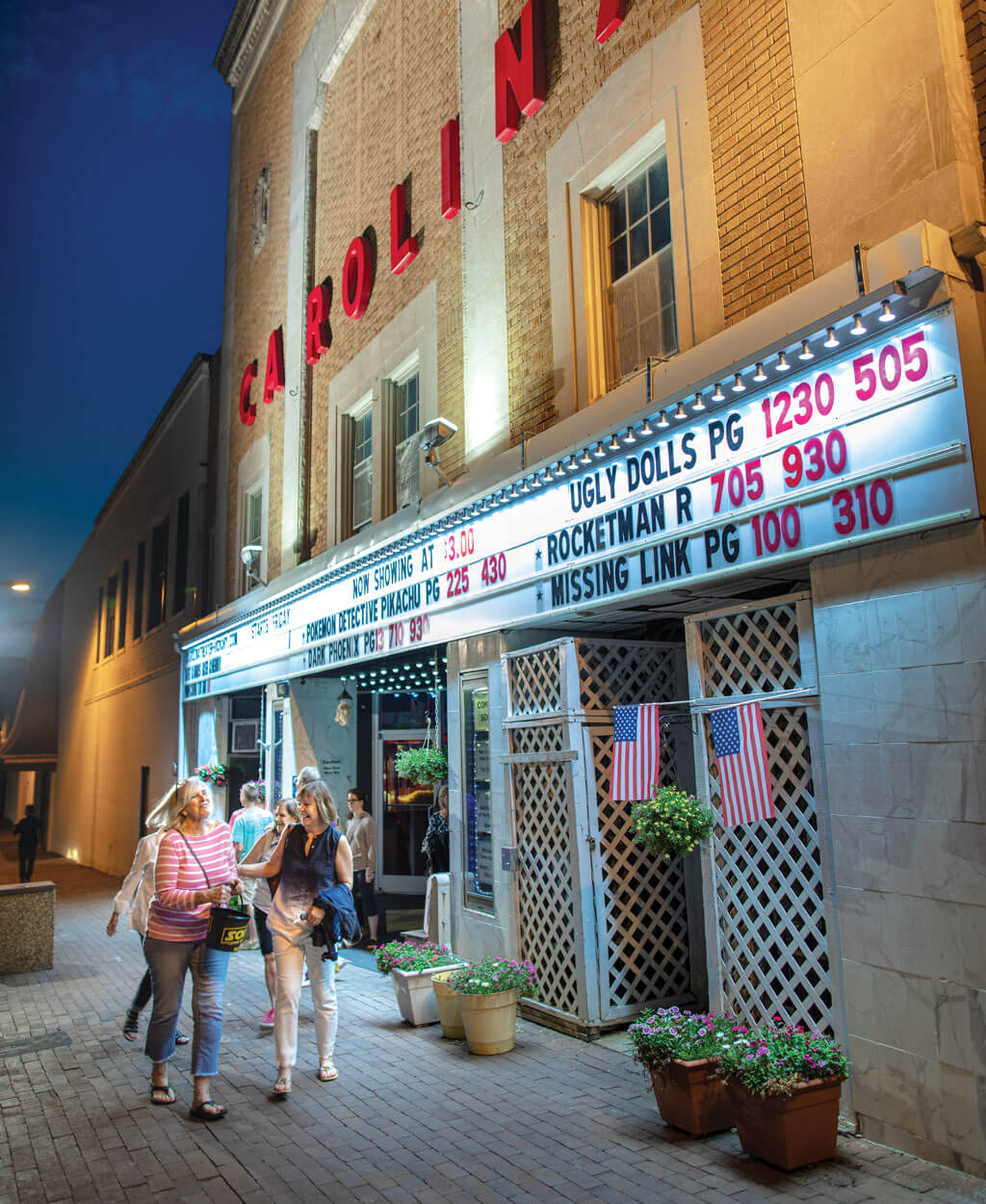 Footcandle Film Society members watch monthly films at the Carolina Theater in downtown Hickory, which has been in operation since 1934. photograph by Jerry Wolford & Scott Muthersbaugh

All film festivals face challenges as they grow, but Footcandle has a unique one: How can an event prized for its small-town spirit keep getting bigger? Filmmakers and audiences alike love that all of the films are screened in the same 400-seat auditorium, providing large, energetic crowds for each film and making it easy to see every single film on offer. (This year, there will be a caterer on-site, for the die-hards who don’t even want to leave the building to eat.) “I hope in the midst of it that the intimacy of the festival is somehow retained,” Hites says. “That’s what filmmakers, I know, really appreciate.”

“Footcandle is what festivals are supposed to be,” Stribling says. “A place for indie filmmakers to cut their teeth, screen their movies, talk to audiences, meet other filmmakers. Big festivals have a different function than they used to. And they weren’t always big festivals — they outgrew the indie vibe.”

This September, Footcandle will once again gather filmmakers from around the world who, like Tóth, will find support from a community eager to discuss movies and the creative process behind them. “Being a filmmaker is really hard; it’s always a struggle,” says Tóth, who has a new film ready for the festival circuit. “And then the film is ready, you show it at a festival, and you can sit down and watch the reaction. You are welcomed; you have a reputation as a filmmaker. Finally, you are somebody.