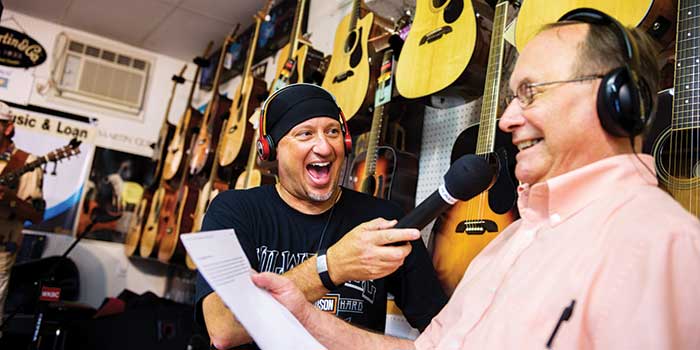 Walk into Main Street Music & Loan in North Wilkesboro, and you’ll find the standard pawnshop inventory of secondhand household items, weaponry, jewelry, and stringed instruments. But wander into the adjoining music room and you’ll find something unexpected, a low stage that hosts monthly live performances — at the unlikely time of 7 a.m. to 9 a.m. That’s when the “Hometown Opry” is broadcast on local radio station WKBC-AM (800) the second Friday of each month.

A typical second Friday finds host Steve Handy striding in at two minutes after 7. Nodding to the live audience and that day’s band, he shucks his motorcycle helmet, hooks up his microphone, and kicks things off in the energetically smooth tones of a seasoned morning D.J.:

And here we go with another “Hometown Opry” on WKBC! Brought to you, as always, by Just Save, now with a newly expanded seafood section — they’ve got fried fish and catfish nuggets, and you know those are mighty fine. That’s Just Save, Highway 18 North in the former Lowe’s. And now it’s 7:07, that lucky time, kicking it off with two by Max Country!

Max Country launches into “Have a Little Talk With Jesus,” followed by the Eddy Arnold chestnut “Make the World Go Away.” Seated in rows of plastic chairs, the crowd listens and nods along. Stationed behind a table and an old-style control board bearing the WKBC logo, Handy nods along, too.

Music is just one part of the show. Between songs, Handy, WKBC news director Ed Racey, and various regulars report on the weather, birthdays, anniversaries, and other community doings, including “senior moments” centered on local retirement homes. Racey scrambles back and forth between the pawnshop and WKBC’s studio around the corner to recite poetry as “Edgar Allan Racey,” or the “Bozo Crime Report” as “Edlock Holmes.” It’s a throwback to the days when country and bluegrass bands played live on the radio, and the D.J.’s did pretty much everything else.

“It’s patterned after old radio,” says Racey. “The kind I remember from when I was growing up. A lot more stations used to have people come into the studio to do live-music programs.”

When “Hometown Opry” started in the fall of 1999, it was a live show broadcast out of WKBC’s studio. Enough people started showing up to listen in person that the show quickly outgrew the station’s cramped quarters. The pawnshop was nearby and had room, and the owner liked the show. So the “Hometown Opry” relocated there in 2001.

Bring your own coffee

Main Street Music & Loan’s performance space has room for about 100, and sometimes that many people show up when acts like bluegrass queen Rhonda Vincent (who has played there twice), the Kruger Brothers, or Ricky Skaggs are scheduled to play. But most months, it’s more of a low-key affair with local bands like Max Country and several dozen attendees.

“It’s a pleasure to play down there, and to listen,” says Herb Key, a 76-year-old retiree who has been on both sides of the stage. “It’s early in the morning, of course, but very enjoyable. Nice crowds. Reminds me of when I had a band with the Future Farmers of America when I was 16, and we’d play live on the radio.”

Over the years, the “Hometown Opry” has left enough of a mark on North Wilkesboro for fans to schedule important events around its unlikely time of day. The show has hosted two weddings, and even the funeral of an expatriate fan.

“A fellow who just loved ‘Hometown Opry’ moved out to California and requested his ashes be spread in the parking lot,” Handy says. “When he died four or five years ago, that’s what we did.”
Get up early enough and there’s no telling what you’ll see there.

David Menconi is a staff writer for The News & Observer in Raleigh. He misses the days when local stations like WKBC were the norm rather than a quaint anachronism. His most recent story for Our State was “License Plate Special” (January 2013).