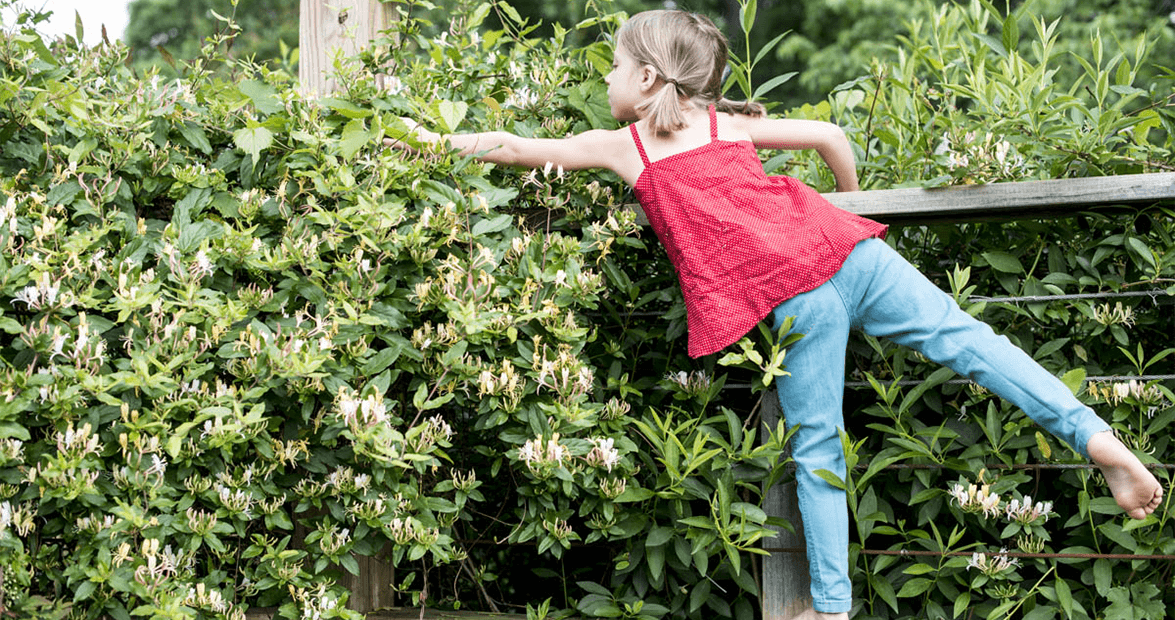 Is the pleasure of a honeysuckle blossom all relative?

When you’re very small, running barefoot through damp grass on a summer evening, honeysuckle’s scent beckons like fireflies. It’s an alluring smell that, on the scale of things that will someday make you weep with longing, is somewhere between a magnolia blossom and your mother’s best perfume.

The scent is so soft, so gentle, that it may take a small nose to really appreciate it. It certainly takes tiny hands to grapple with a honeysuckle blossom.

First, you pull off a creamy white or pale yellow flower. Then you hold it with the green base up. You carefully tug off the little green cap and draw out the single thread of the stamen. If you’re lucky and the fairies are with you, you’ll be rewarded with a drop of nectar, a small sip of sweetness, hanging on the end of the thread.

It’s a joy best savored by the young and patient, those with mouths so small and taste buds so fresh that the little drop seems as big and sweet as a Nik-L-Nip, those wax bottles of colored sugar syrup.

It’s like God loved Southern children so much, he draped the woods with a candy counter, free for the taking, proof that life will always be delicious and full of promise.

And then, inevitably, we grow up. As we get larger, tiny pleasures like honeysuckle blossoms don’t seem like such a big deal anymore. We get lives and yard work and mortgages, and we discover that not everything lovely is carefree.

The honeysuckle that festoons our woods is Japanese honeysuckle, and it’s an outsider here, an invader that pushed its way in, like kudzu and wisteria, those other vines that came from the outside and stayed to color the Southern landscape. Honeysuckle is not supposed to be here. It’s just another visitor that dropped by and liked it here too much to leave.

Bill Smith, the chef at Crook’s Corner in Chapel Hill, is famous for the honeysuckle sorbet he dishes up every summer. But he’s been chastised for making it. Picking honeysuckle flowers on the bike path near his house for batches of sorbet, he sometimes encounters belligerent botanists from nearby UNC-Chapel Hill.

“They’ll say, ‘These are invasive — you should be pulling them up by the roots,’ ” Smith says. “They tell me I’m making them desirable and they’re keeping something native from growing. Like I have time to pull them up — there’s acres of the stuff.”

Not everyone has such a drastic view of the honeysuckle situation, though. 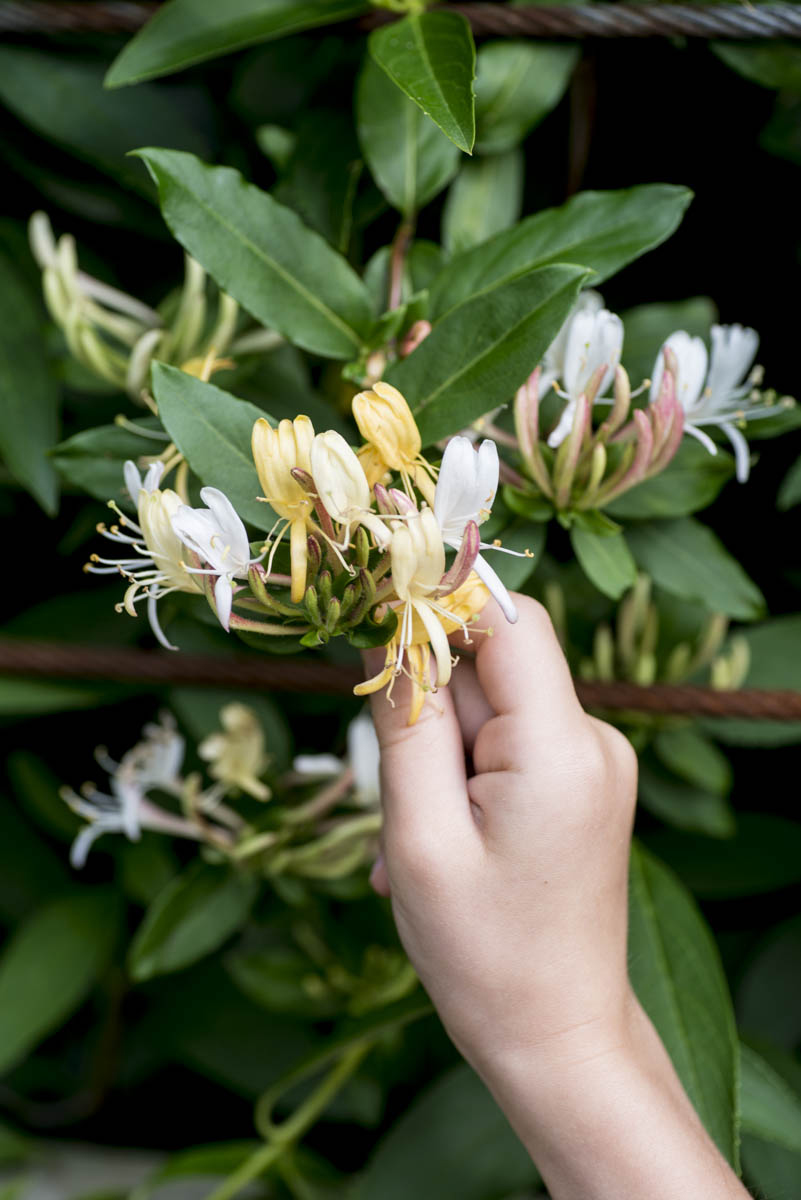 Marc Williams of Asheville is an ethnobotanist and the executive director of the nonprofit Plants and Healers International. First, we have to ask: What’s an ethnobotanist? Well, Williams explains patiently, and probably not for the first time, ethno involves people, and botany involves plants. So ethnobotany, he says, is the study of the interface between people and plants.

Williams admits he has a soft spot for Japanese honeysuckle.

“I grew up sucking the nectar out of them. Probably one of the first plants I learned,” he says.

Though honeysuckle covers thousands of acres and crowds out all kinds of useful plants, Williams says, it can’t be blamed for its presence here. Because unlike plants that are spread by birds or animals, Japanese honeysuckle, like kudzu, was brought here deliberately. People started planting it in the early 1800s for a simple reason: It’s pretty and it smells nice.

And Alan Muskat, who leads foraging hunts for wild foods around Asheville, says he’s inclined to think we should be sympathetic to invaders. After all, most of us are descendants of invaders, too.

Muskat is all in favor of making use of honeysuckle. It’s here to stay, he says, so we should make the best of it.

“If you can’t beat it, eat it.” Spoken like a true forager.

Making use of the honeysuckle flavor, though, isn’t that easy. It’s delicate and elusive, and you can’t gather enough of those tiny drops of nectar to amount to more than a hummingbird’s sip.

Heating it will destroy the flavor. So you can’t cook with it. But you can capture the flavor in a culinary way.

On a Saturday morning in early summer, I went in search of honeysuckle to bring into my kitchen. I ended up parked by a field at the back of a local subdivision, wading into a thicket that had erupted with white and creamy yellow blooms. 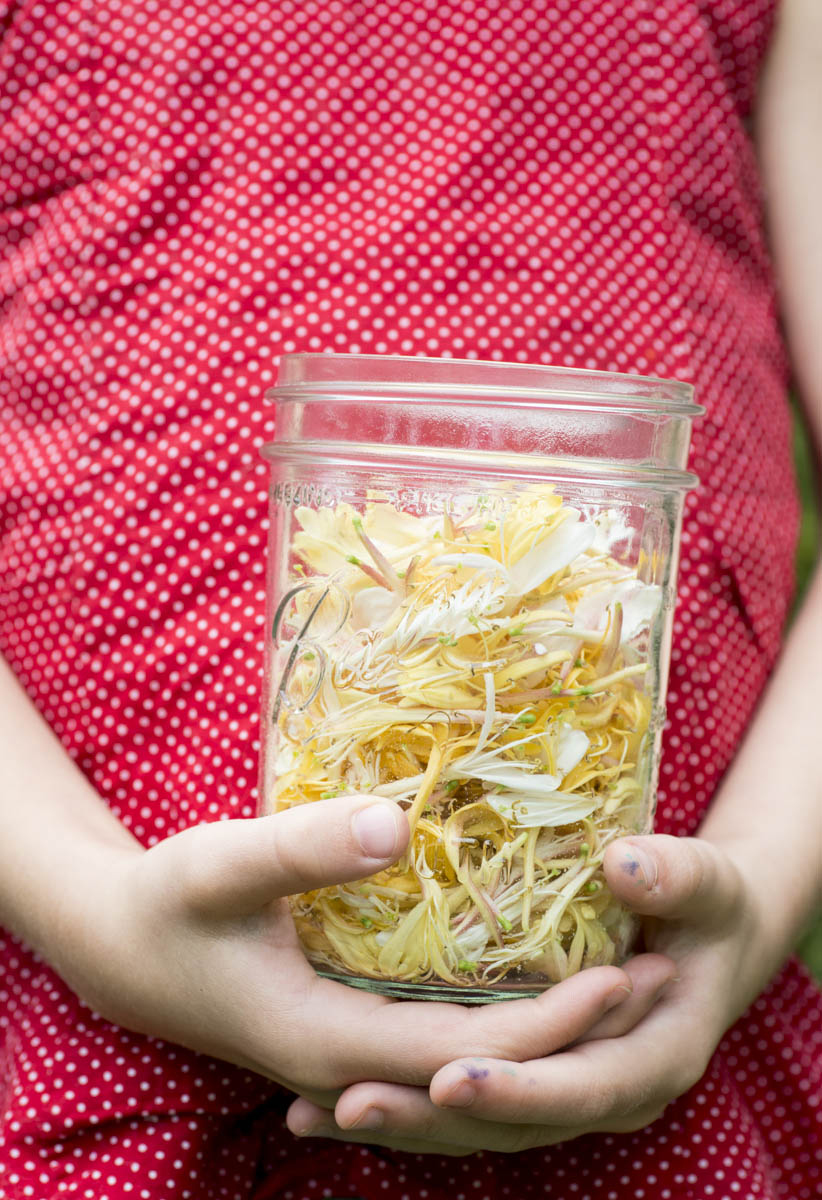 The scent was just as intoxicating as I remembered from my childhood, the long blossoms just as lovely. With their curling petals, they look like something Tinker Bell would wear to a wedding. The sweet smell reminded me of the orange blossom perfume they used to sell at tourist shops in Florida when I was a kid.

The difference is that I am so much taller now, and I can reach so many more blossoms. I picked a quart of flowers so quick, I barely had time to break a sweat, even in the morning humidity.

Back in my kitchen, I remembered that Bill Smith had mentioned how the waitresses at Crook’s Corner like to cover honeysuckle blossoms with white rum. So I covered a bowl of blossoms with Mr. Bacardi’s finest and let it sit overnight. The next day, I had rum with an aroma and flavor that gave a new meaning to the word intoxicating.

Mixed with pineapple juice and a little simple syrup, it made a lovely drink, just the thing to sip on a summer evening while the whip-poor-wills cry. It was so good, it made me want to go find a clean mayonnaise jar and see if catching lightning bugs was as much fun as I remember, too.

Let the kids have their fill of honeysuckle flowers. I found an adult way to enjoy them.

With thousands of acres, there just might be enough to go around.