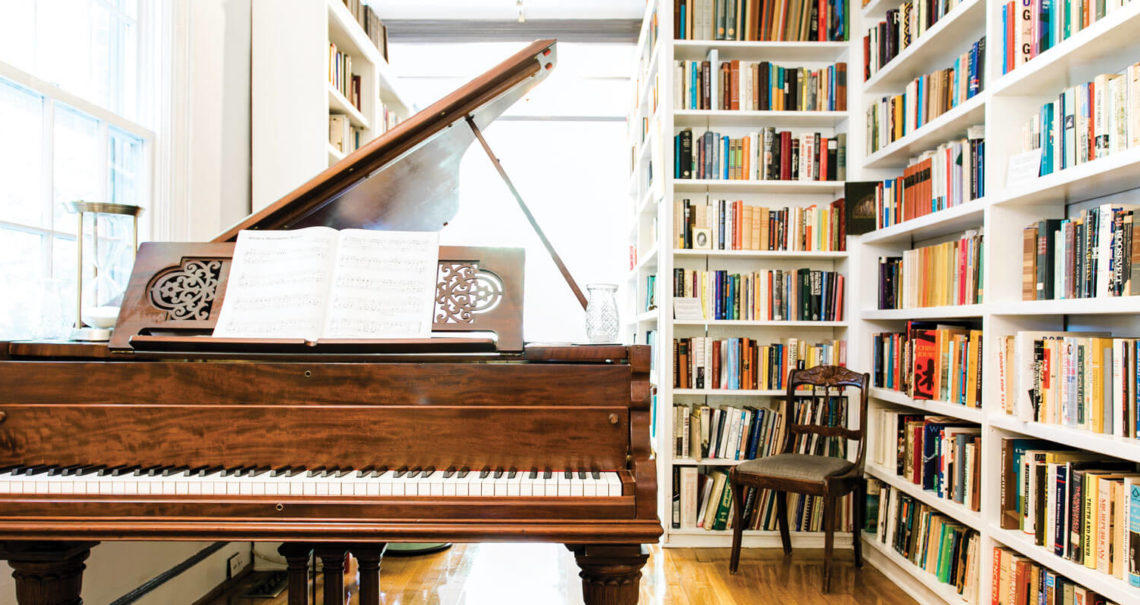 My father grew up in a home where English was spoken as a second language and only one book was to be found: the Bible. On his paper route in junior high school, one of his customers was a local university professor with a home library — an idea that fascinated my father. The professor loaned Daddy a copy of Thomas Wolfe’s Look Homeward, Angel. It was the beginning, as Humphrey Bogart said, of a beautiful friendship. It also inspired my father to start building his own book collection, which would grow into one of the largest privately owned libraries in North Carolina, and to eventually earn his PhD — no small accomplishment for a young man whose parents had between them a sixth- and 12th-grade education.

I grew up in a world centered on the two things that changed my father’s life: books and education. Despite it being the ’80s, our home was devoid of video games, electronic toys, and a constantly running TV. Birthday and holiday gifts always included a beautiful edition of a book, designed to impress upon a child that books were treasures. By age 8, I had read my way through much of Dickens, but I still had no idea who Michael Jackson was.

It’s fitting, then, that books would play an important role in my adult life, too. I would go on to become a writer, own a bookstore, and eventually turn my childhood home into a bed and breakfast honoring the written word, a temple devoted to North Carolina writers — and to my father.

The story of this house spans a century — four generations of two families. It was built by Dr. Joseph Ward Hooper in one of Wilmington’s first “streetcar suburbs.” After Dr. Hooper died and the children left home, Mrs. Hooper lived here until the 1980s, and passed away in 1987. For several years, the house sat vacant, on the verge of being condemned, waiting for us to find it.

I remember the smell the first time my family walked in with the real-estate agent. It was the scent of Carolina springtime: dampness, pinewood, and dust. I knew at that moment, in the bottom of my 7-year-old heart, that the house had been waiting for me. It was my house, and I was its person. Our destinies were intertwined in a very romantic, princess-like way. Did you see those quarter-pie windows on the third floor? Clear Rapunzel territory. I was too young then to understand the cautionary side of fairy tales: that a price must be paid for gifts and for destiny. 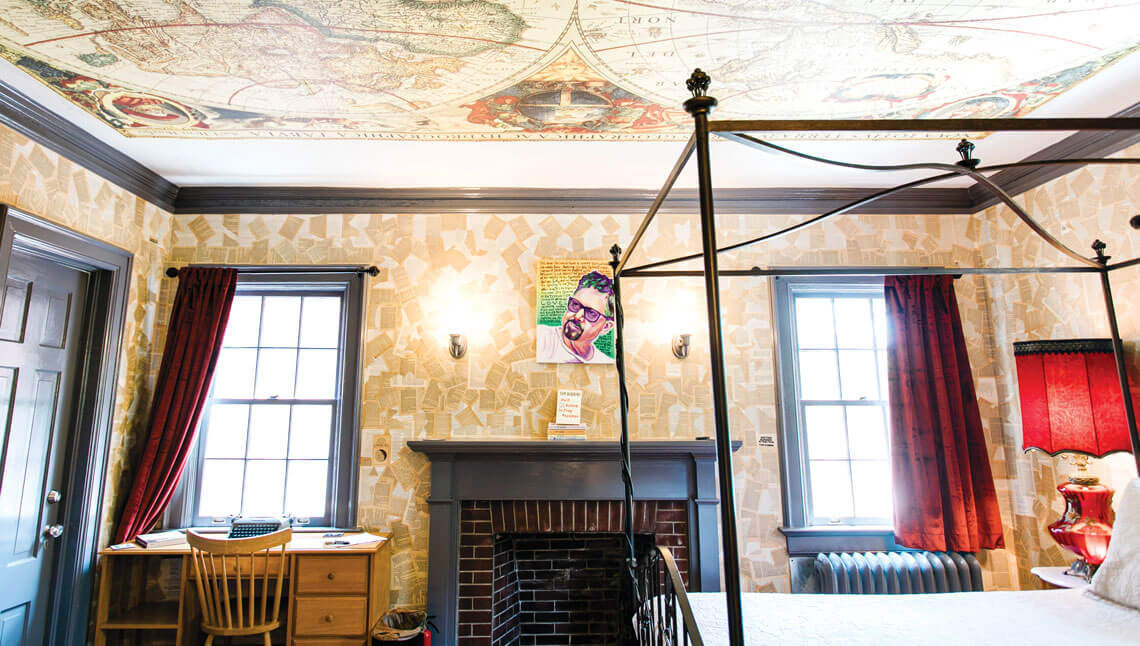 The author’s childhood bedroom is now a guest room dedicated to Tom Robbins. She papered the walls with his writing, one page at a time. photograph by Matt Ray Photography

The house seemed to be trying out different elements on each of us to lure in the catch. My father was easy prey: There were built-in bookcases in the living room — filled with books that the Hoopers had left behind. The only thing that Daddy had put on his wish list for a house was enough wall space for shelves to hold all of his books.

“What are these?” Mommy asked skeptically as she placed her fingers over the tiny holes in the windowpanes at the back of Dr. Hooper’s office. (Years later, we would learn that those holes, which are still there in 2020, were made by the neighbor boys’ BB guns.) My mother, who knew that she would shoulder the burden of the renovation while working full-time, caring for my grandparents, and trying to maintain some semblance of family life, was not as easily impressed with the house as Daddy and I were.

On a cold, late-October day, six months after we first saw it, we all moved into what would later become my bedroom. It was the only room in the house where the plaster had been repaired, the floors finished, and the walls painted; my mother had already spent months laboring after full days at the office to get that much ready. When we cranked up the ancient radiators for the first time that night, it sounded like a train coming through the walls.

The house was clearly haunted — or it had personality; I’ve never really been able to separate the two in my mind. The ghost, whom we called Mrs. Hooper — she seemed to be the most likely culprit — did not like my mother. She tormented her, turning lights on and off, opening doors and slamming them in her face — and, perhaps eeriest of all, making the servants’ bells ring. Though Daddy and I thought the bells were wonderful to play with, Mommy immediately had them disconnected, a move that she described as “essential to preserving the fragile threads of my sanity.” I could lean on the bell in the owner’s suite for minutes at a time and nothing would happen — but Mrs. Hooper could still make it ring!

My mother’s prediction about the challenges we would endure was correct: The next 17 years would be eventful. The living room ceiling collapsed. My puppy escaped and got run over; miraculously, he survived! We endured horrific adventures with historic plumbing that are unfit for print. The painter moved in with us for nine months. And that’s just the tip of the iceberg. I realize now that it was all preparation for my 30s, when I would take the helm on a third round of renovations.

My mother got to have a few years with the house as the showpiece she had dreamed of. She entertained lavishly, especially during the holidays. When she died in 2009, my father, and the house around him, crumbled. Historic houses need almost daily care. My father, nursing a broken heart, had no interest in the leaking roof or cracking plaster. He died five years after my mother.

With a small independent bookstore, I wasn’t rolling in cash on the day we gathered in the backyard to spread my parents’ ashes. It had been the setting of so many important family memories; there didn’t seem to be a more appropriate place for them to spend eternity. My husband, Jock, said to me quietly, “We don’t have the lifestyle for you to have a historic mansion. What is your plan?”

The ghost tormented my mother, turning lights on and off and making the servants’ bells ring.

I stammered, not sure where to look. “Well, I pulled a bed and breakfast license, and we do have one of the largest privately owned libraries in the state …” I couldn’t part with the library. It would feel like an amputation. It meant so much to Daddy, to me, to all of us. If this man loved me, he wouldn’t ask me to let it go.

Jock shook his head, hugged me, and chuckled.

Five bathroom renovations, a slate roof repair that cost more than my college education, and thousands of hours of sanding plaster later, we opened Between the Covers: A North Carolina Writers’ Bed & Breakfast in 2018. With its thousands of books, the bed and breakfast celebrates a legacy of the written word in our state. The formerly overgrown garden is ornamented with poems that hang from the trees and camellias, written by the poets laureate of North Carolina.

The room at the top of the stairs, with French doors and a beautiful view of the sunset, is dedicated to Maya Angelou. We painted it a soft yellow in honor of her famous yellow house in Winston-Salem. The late afternoon sun streaming through the magnolia leaves makes the walls glow. My old bedroom is themed around the works of Tom Robbins, a writer who’s frequently associated with the Pacific Northwest but who was actually born in Blowing Rock. One spring was devoted to papering the walls with pages from his books.

The dining room, the stage for my mother’s most important holiday productions, remains the center of activity. But instead of lavish dinners, we serve elaborate breakfasts. Hours of effort in the early morning pay off when guests who are expecting a store-bought Danish and a cup of coffee instead feast their eyes upon a table set for royalty with eggs and French toast and parfaits. I know it sounds crazy, but I believe that the house, which was built for a large family that entertained, is happy for the opportunity to show off again.

Of course, most of our guests truly appreciate reading — that’s why they’ve chosen us. But even so, the sheer magnitude of this temple to the written word is surprising for many people. For me, what is significant is not the number of books, but the memories that each volume carries. These were not purchased to look attractive on a shelf, but to be read and discussed and enjoyed. Sharing that joy with others, watching their faces light up as their eyes scan the shelves — that’s the connection across the decades to a little boy with a paper route, and the dream he built for me.