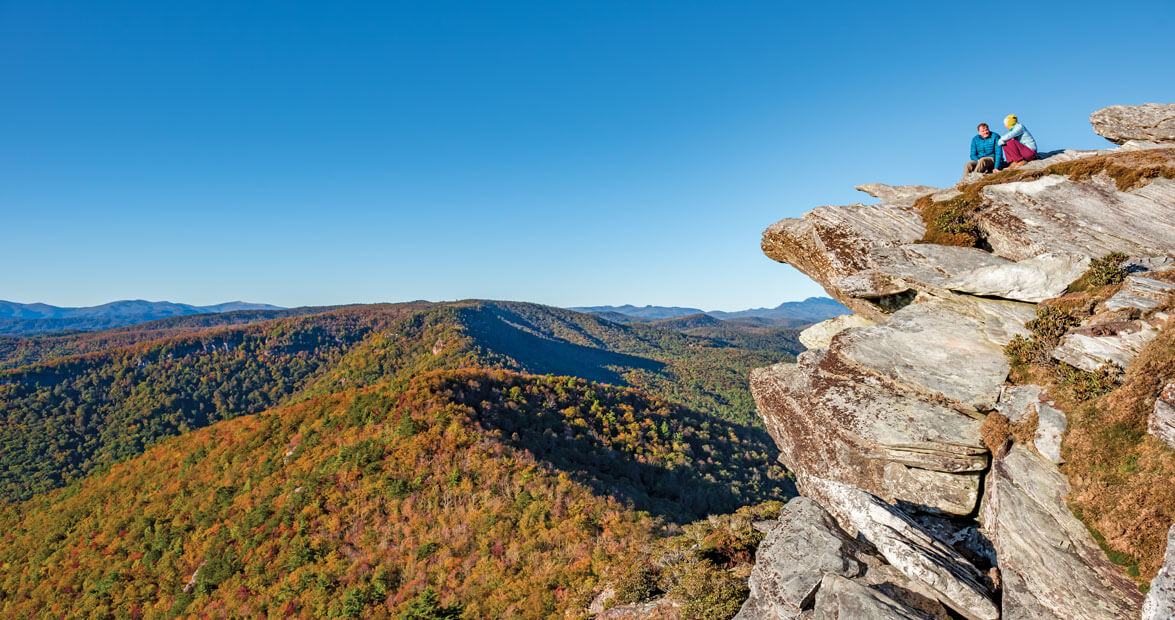 Jutting out from the landscape like high dives, the jagged cliffs of Hawksbill Mountain rise nearly 2,000 feet above the valley floor, making this summit one of the highest points in Linville Gorge. The roughly one-mile hike to the top starts out gentle before a challenging ascent gives way to a wide, brushy plateau. A trail to the right of a large boulder (you’ll know it when you see it) leads to the north side of the mountain, where hikers are rewarded with rare 360-degree views of the gorge and beyond, including Grandfather Mountain, Table Rock, Mount Mitchell, and, on clear days, Charlotte, some 90 miles away.

A 7.4-mile round-trip hike that rises more than 1,300 feet brings hikers to the summit of Shortoff Mountain, and it’s worth the effort: The wildfires in 2007 and 2017 that cleared much of the tree cover opened up vistas of Lake James, Table Rock, and the gorge, and allowed wildflowers and ferns to thrive. Near the summit, a charred, withered Table Mountain pine marks some of the best views on the trail. 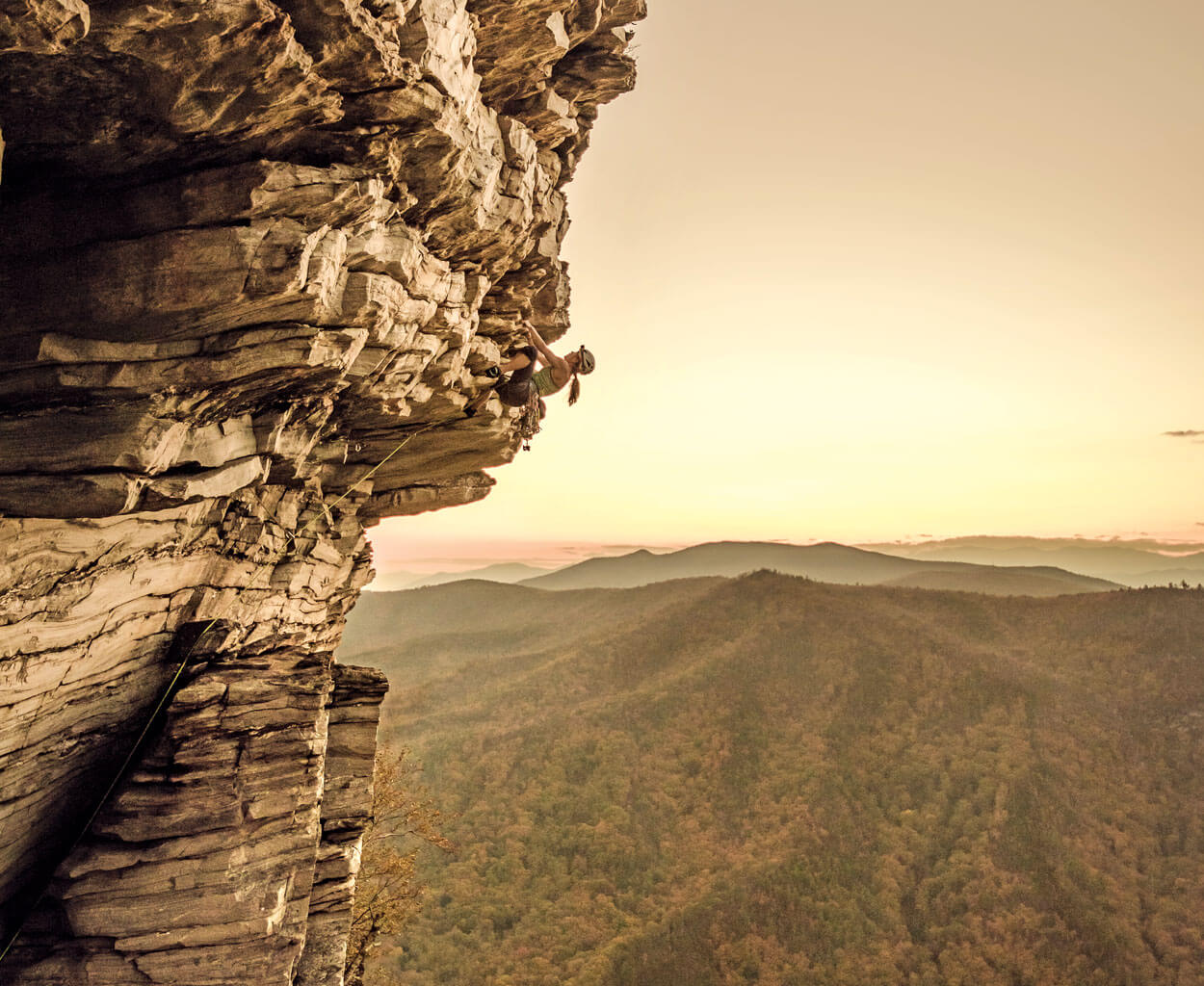 Throughout the gorge, climbers can find routes for various skill levels and techniques at The Chimneys (pictured), Hawksbill and Shortoff mountains, and Table Rock. photograph by Bryan Miller

The hardest part about getting to Wiseman’s View isn’t the hike — it’s the drive. Four miles up the bumpy, unpaved Kistler Memorial Highway, a short trail leads to two spectacular overlooks named for Lafayette “Uncle Fate” Wiseman, who, in the 1800s, often camped here while his cattle grazed nearby. The first stone platform offers a panorama of Table Rock and Hawksbill and Brown mountains, while the second opens to a wide-angle view of the northern half of the gorge, where the Linville River can be heard, ever so faintly, rushing nearly a thousand feet below. 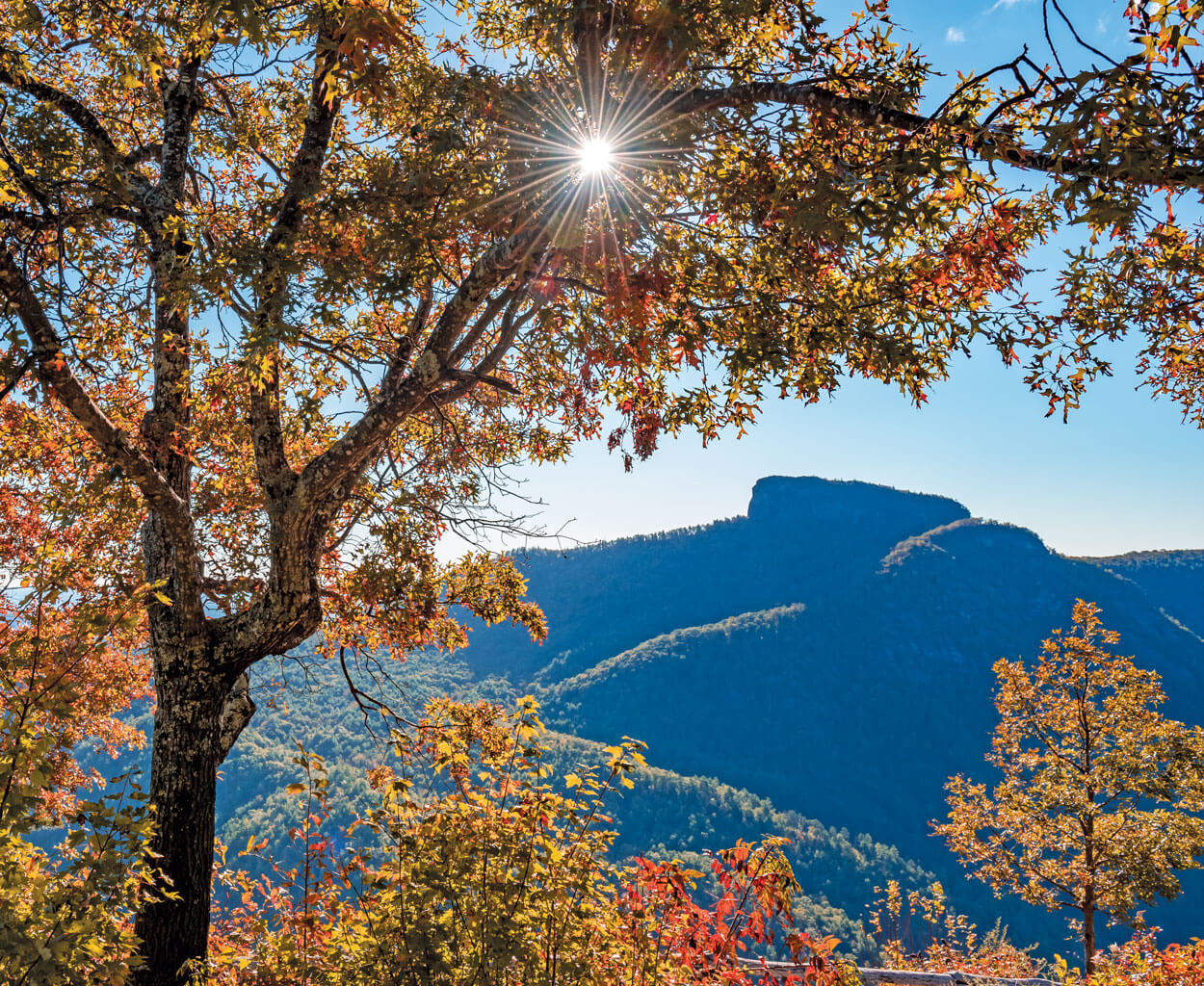 A bumpy drive and a gentle hike lead to spectacular overlooks at Wiseman’s View. photograph by Emily Chaplin

The final, unmarked trailhead on Kistler Memorial Highway leads to a sandy path that gently slopes up and ends in a ring around the striking Pinnacle rock formation, rising almost vertically out of the landscape. A designated viewing platform overlooks Lake James, Shortoff Mountain, and the southern end of the gorge, while adventurous spirits can free-climb to the top of the rock for 360-degree views. 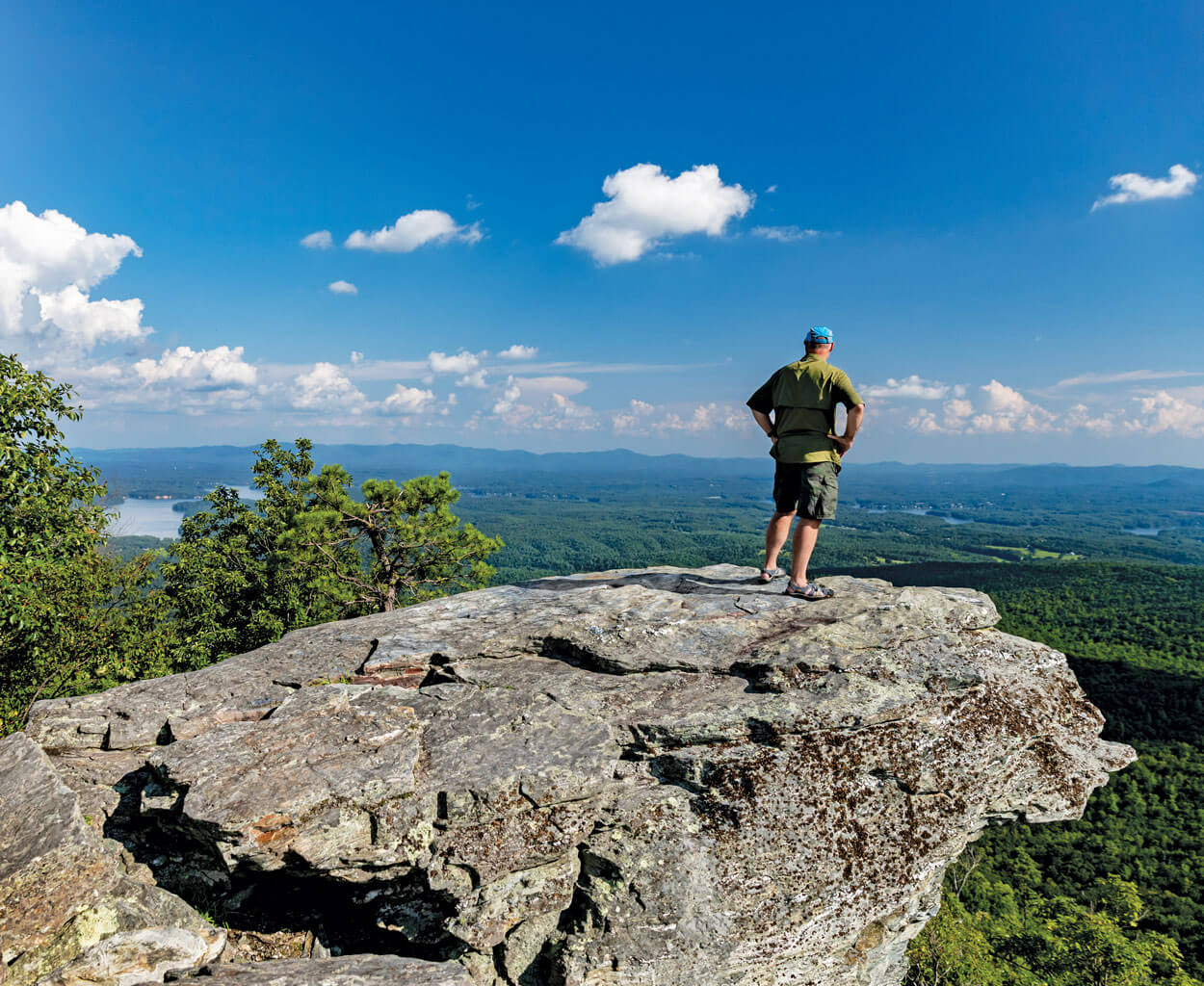 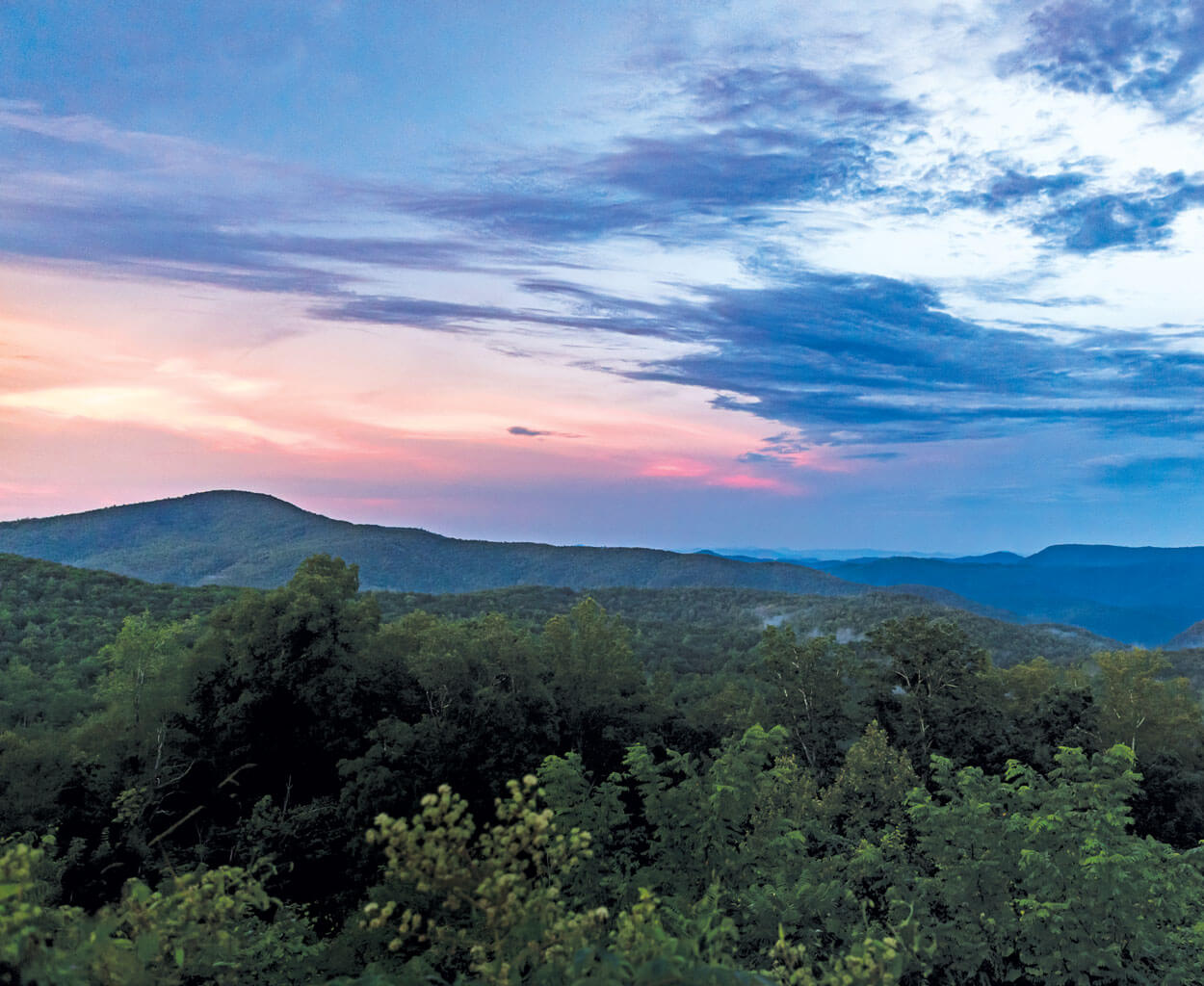 You might catch a glimpse of the mysterious Brown Mountain Lights from the overlook at Wiseman’s View. photograph by Charles Harris

As early as the 1850s, visitors to Linville Gorge reported seeing glowing orbs, seemingly appearing out of nowhere, on Brown Mountain. No one knows what causes them — the flashlights of nighttime hikers? Electricity or natural gas? Ghosts searching for missing loved ones in the woods? — but it’s not for lack of trying. Researchers have been working to pinpoint the source of this rare phenomenon since at least 1913. The overlook at Wiseman’s View is a great place to catch a glimpse of these mysterious lights — if you’re lucky.

The mighty granite pillars that give this part of the gorge its name are a rock climber’s dream, but they’re popular among hikers and campers, too: The path through The Chimneys forms part of the Mountains-to-Sea Trail as it passes through the gorge, winding over, around, and between the rocky outcrops, where peregrine falcons can sometimes be spotted among the crags. The trail itself offers plenty of views of the surrounding mountains to both the east and the west, but for those with the equipment (and the nerve) to reach the top of one of the many boulders, the reward is a view that spans from the Piedmont to Tennessee. 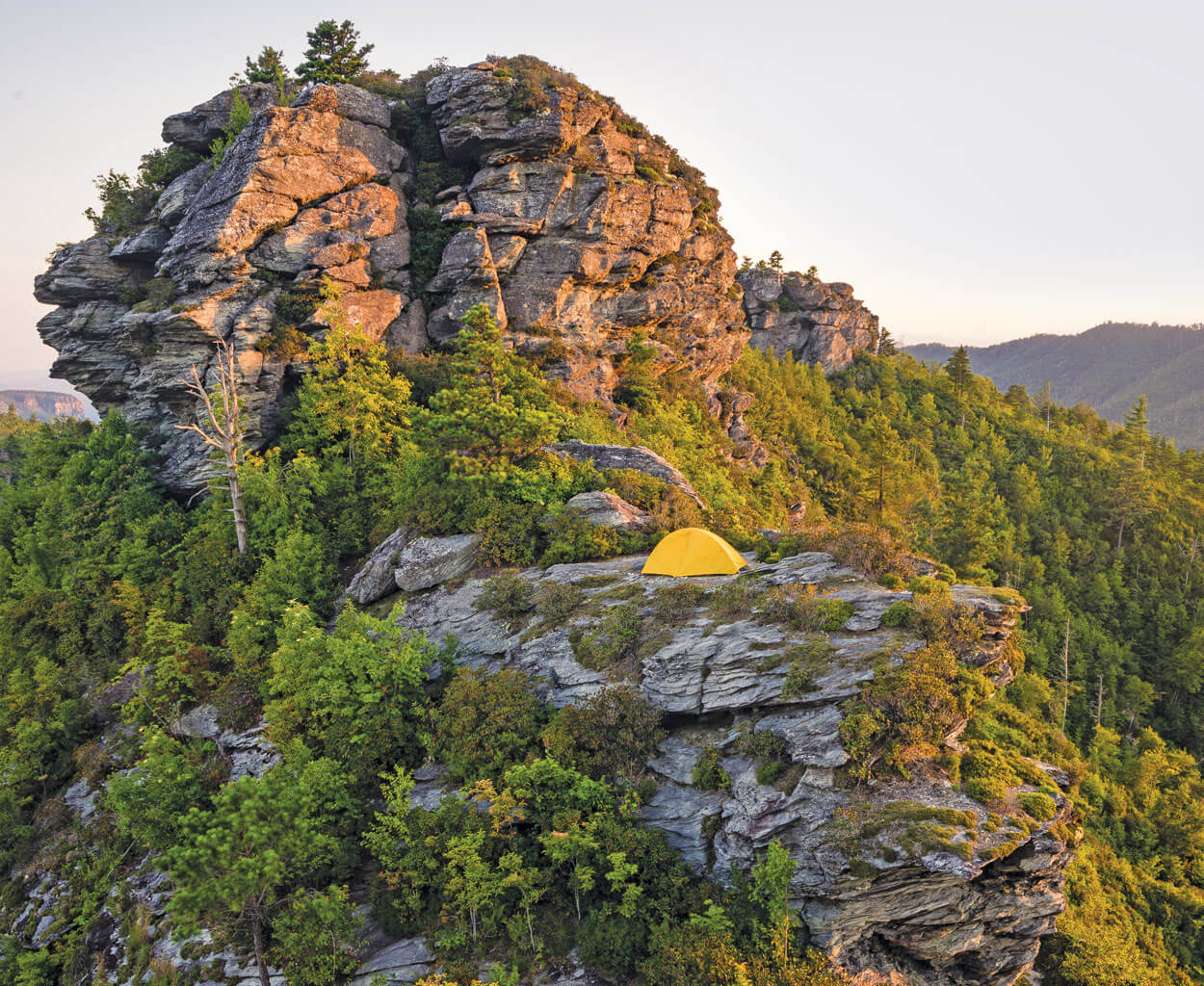 If your reach the top of one of The Chimney’s many boulders, you’ll be rewarded with views from the Piedmont to Tennessee. photograph by Drew Mercer

The Cherokee Indians who used Linville Gorge as seasonal hunting grounds called this mountain Attacoa, the “mystic altar” where they performed sacred ceremonies. Though Table Rock, as it’s known today, is most easily recognized by its distinctive rock face and seemingly flat peak, visible from around the gorge, the mountain is also known for its abundant plant life: rhododendrons and azaleas, bristly locust and sand myrtle, orchids and wild indigo. A rugged one-mile trail through the woods leads to the exposed summit, where side trails head to overlooks that showcase the vastness of the gorge: To the south, Lake James shimmers in the distance, while to the west, the Linville River cuts through the valley, slowly whittling away at the rock as it has for hundreds of millions of years. 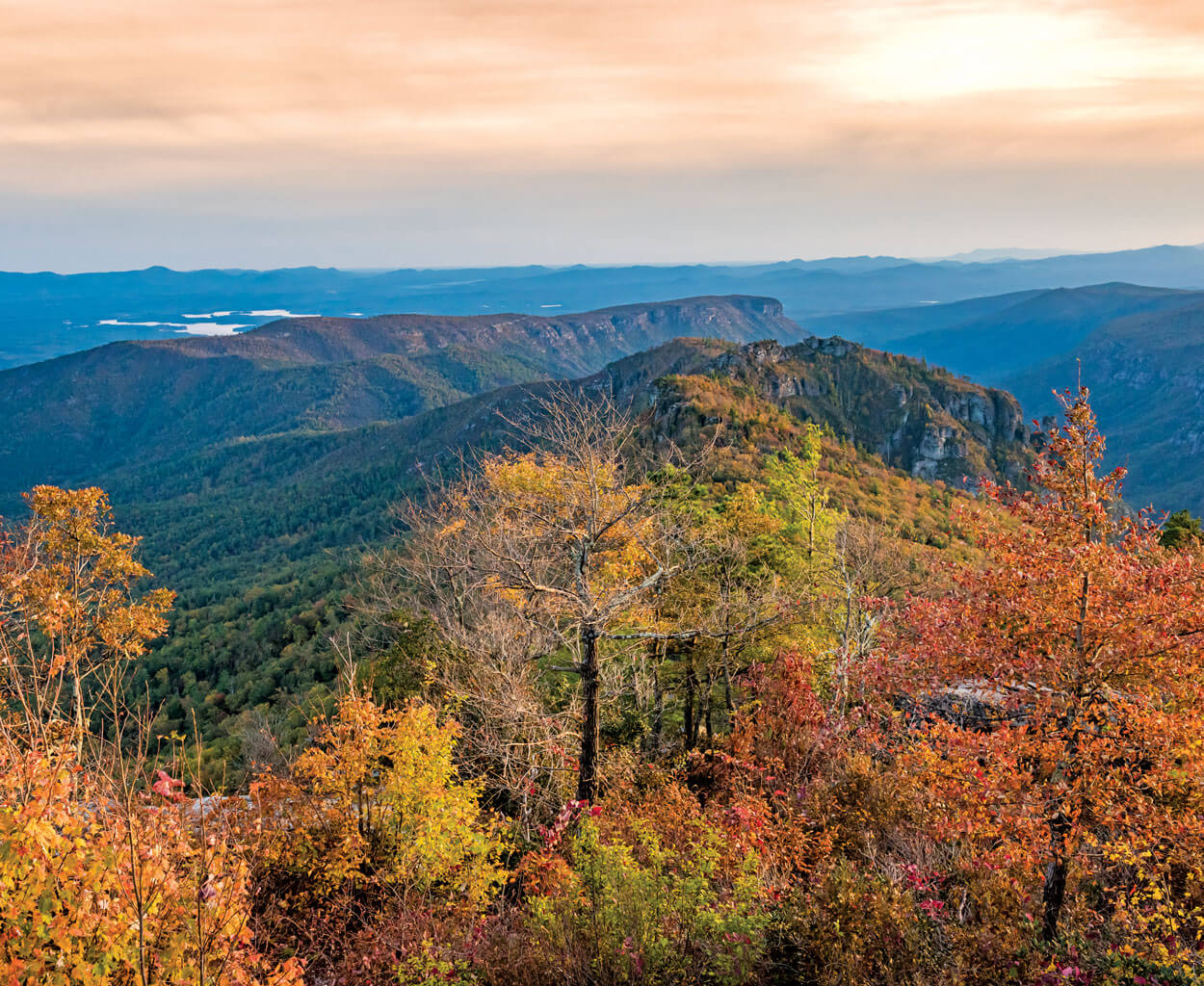 A rugged one-mile trail through the woods leads to the exposed summit of Table Rock. photograph by Emily Chaplin