Before it was a badge of honor, “Tar Heel” was a derogatory term for workers in the naval stores industry, who toiled — most likely barefoot in the summertime — to coax tar, pitch, and turpentine from the pines across our Coastal Plain. State lore holds that the nickname’s origin story changed during the Civil War, when it became a metaphor for North Carolina soldiers standing their ground in battle. Nowadays, “Tar Heel” seems more of a piece with the down-to-earth, hardworking attitude that makes our state “a vale of humility between two mountains of conceit.” Whether preserving old traditions or creating new ones, North Carolinians are resourceful and determined, and always blazing new trails. 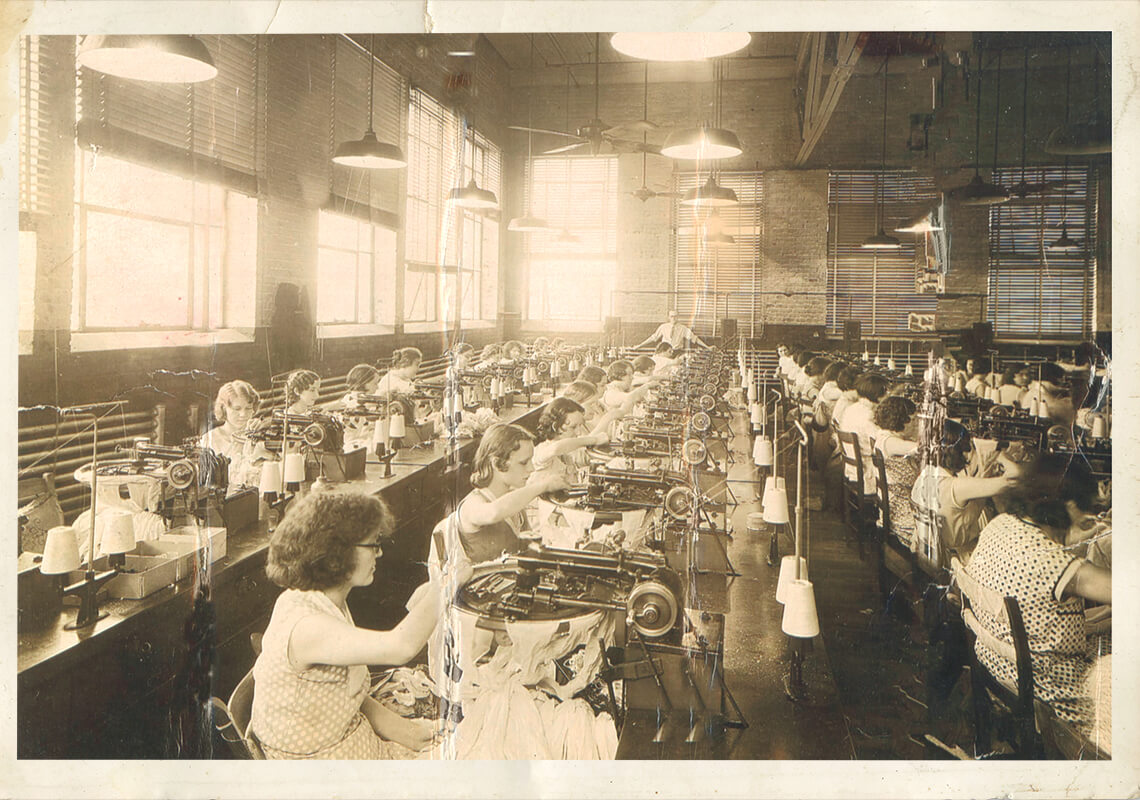 A History of Hosiery 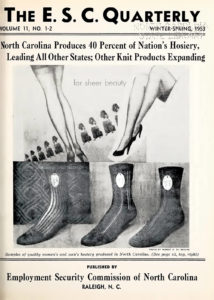 The state’s Employment Security Commission devoted a 1953 publication to the 425 hosiery plants employing more than 50,000 workers in 56 counties. photograph by THE NORTH CAROLINA DEPARTMENT OF NATURAL AND CULTURAL RESOURCES

By the mid-20th century, toes across the nation were clad in North Carolina-made socks, stockings, and baby booties. So much so that the state’s Employment Security Commission devoted a 1953 publication to the 425 hosiery plants employing more than 50,000 workers in 56 counties, proudly announcing, “North Carolina not only leads all states in the nation in the manufacture of hosiery but produces more than 40 percent of all hosiery manufactured in the entire nation.” For the city of Burlington, the industry was a lifeline: After the North Carolina Railroad moved its repair shop out of Alamance County in 1886, cotton mills kept the community afloat — then, around the turn of the century, gave rise to the hosiery mills that helped it prosper. Over the next 50 years, mom-and-pop operations as well as large-scale facilities — including May Hosiery Mills — earned Burlington recognition as “The Hosiery Center of the South.” 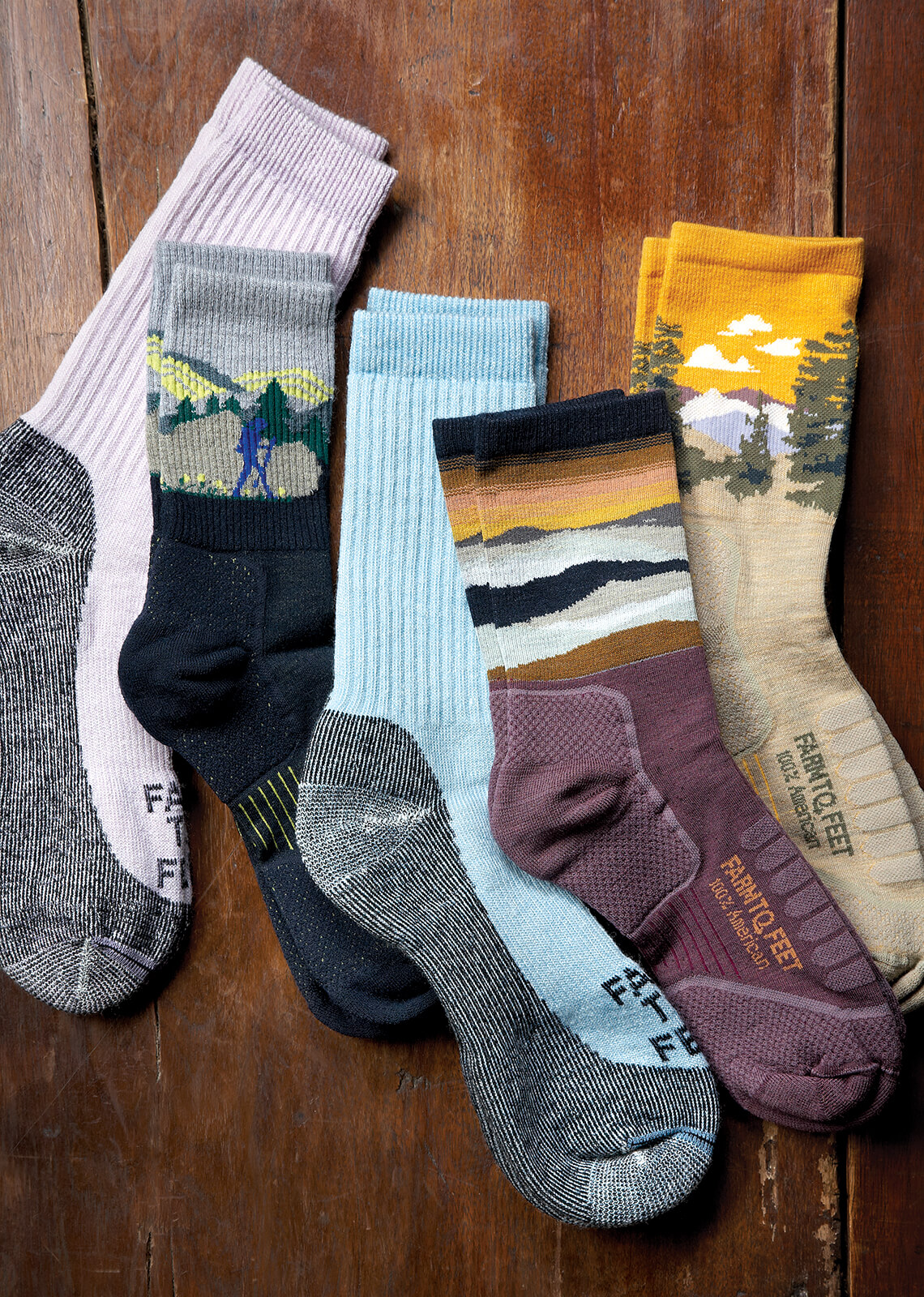 Some Farm to Feet socks are named for locations along the company’s supply chain. Others reflect the natural beauty that the Nesters hope their socks will help people discover, right in Farm to Feet’s backyard. photograph by Matt Hulsman

The Nester family had been in the hosiery business for decades when, in 2013, they started producing their own line of socks in their Mount Airy factory. Every material that goes into a Farm to Feet sock, from the merino wool to the nylon and elastic and down to the packaging, is sourced or made in America. And each design is a love letter to a special place. Some are named for locations along the company’s supply chain. Others — like the Blue Ridge (above, second from left), a collaboration with hiker Jennifer Pharr Davis, and the Max Patch (second from right) — reflect the natural beauty that the Nesters hope their socks will help people discover, right in Farm to Feet’s backyard. 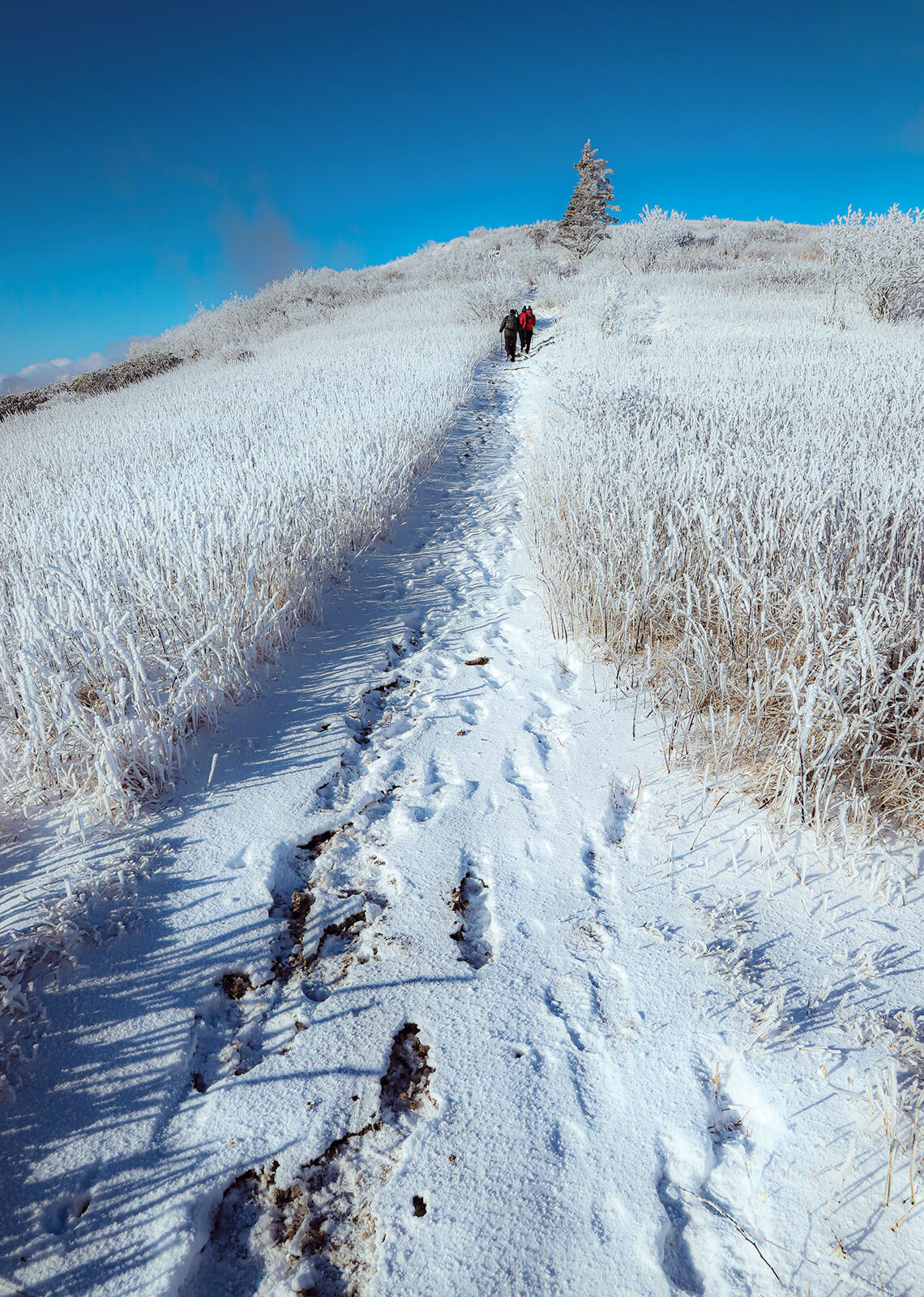 Take a wintry hike up to Jane Bald, a peak on Roan Mountain. photograph by KAT DELLINGER

Comfortable socks and a sturdy pair of boots are a necessity in North Carolina, where hiking trails guide us to spectacular vistas and bring us closer to nature. Although high-profile treks like the Appalachian Trail command the most attention, trails big and small wind through every region of our state. A walk through a maritime forest shows off a different side of our coast; a stroll along an urban greenway offers a new perspective on Charlotte or Raleigh. With every step, we fall a little bit more in love with the state we call home. 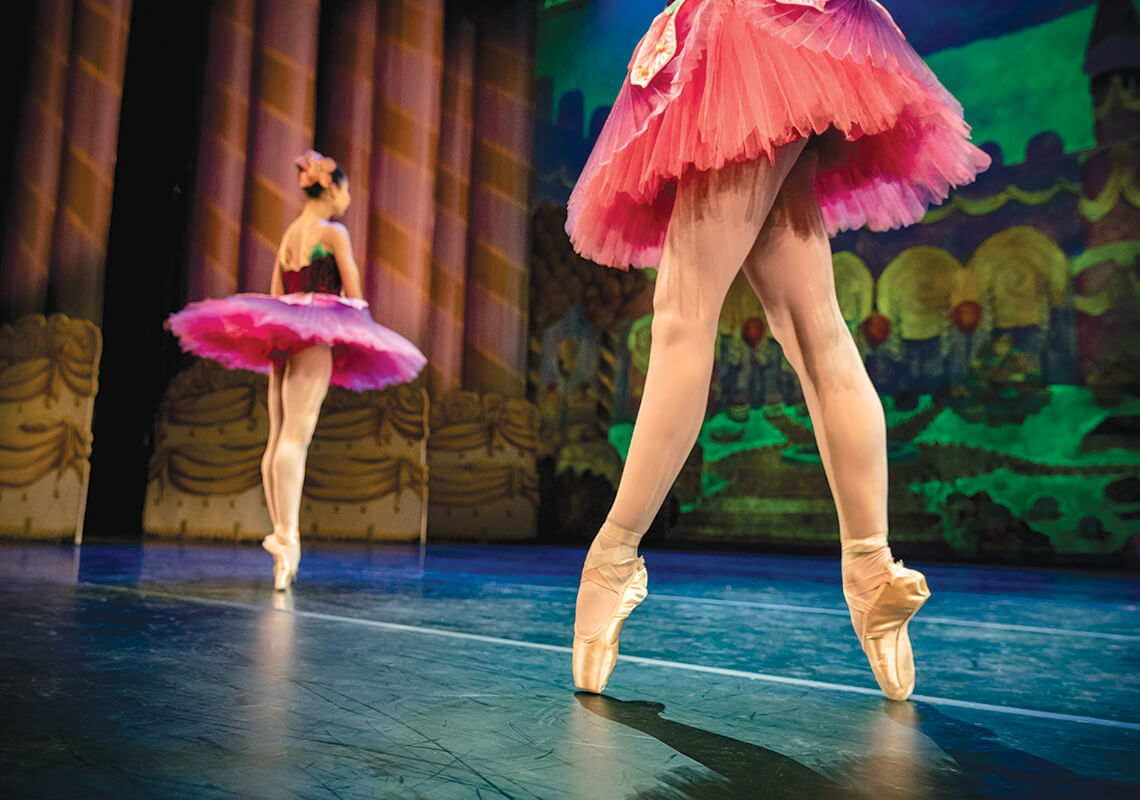 Carolina Ballet’s 42 dancers — including Matilda Solis and Anna Ingold, in costume for the “Waltz of the Flowers” in The Nutcracker — come to Raleigh from around the world, having trained at the most competitive level to tell stories en pointe. photograph by Charles Harris

There’s more to ballet than meets the eye, says Zalman Raffael, artistic director and CEO of Carolina Ballet — there’s a subtext to the dancers gliding and twirling and leaping across the stage. “Like in The Nutcracker,” Raffael says, “all these stories are metaphors for life and hope and harmony and dreams.” When Raffael moved to Raleigh to join Carolina Ballet in 2005, the company was less than a decade old, but it was helmed by experienced members, like founding Artistic Director Robert Weiss, who were passionate about passing down the art form. The repertoire that Weiss created had the level of atmosphere and craft that Raffael had experienced growing up around New York City Ballet — on a fraction of the budget. Raffael hopes to continue what Weiss started and to keep making Carolina Ballet accessible to a wide audience. Return visits reward balletgoers with a deeper understanding of the stories and symbolism that play out on the stage, he says. “It’s like learning a language.” 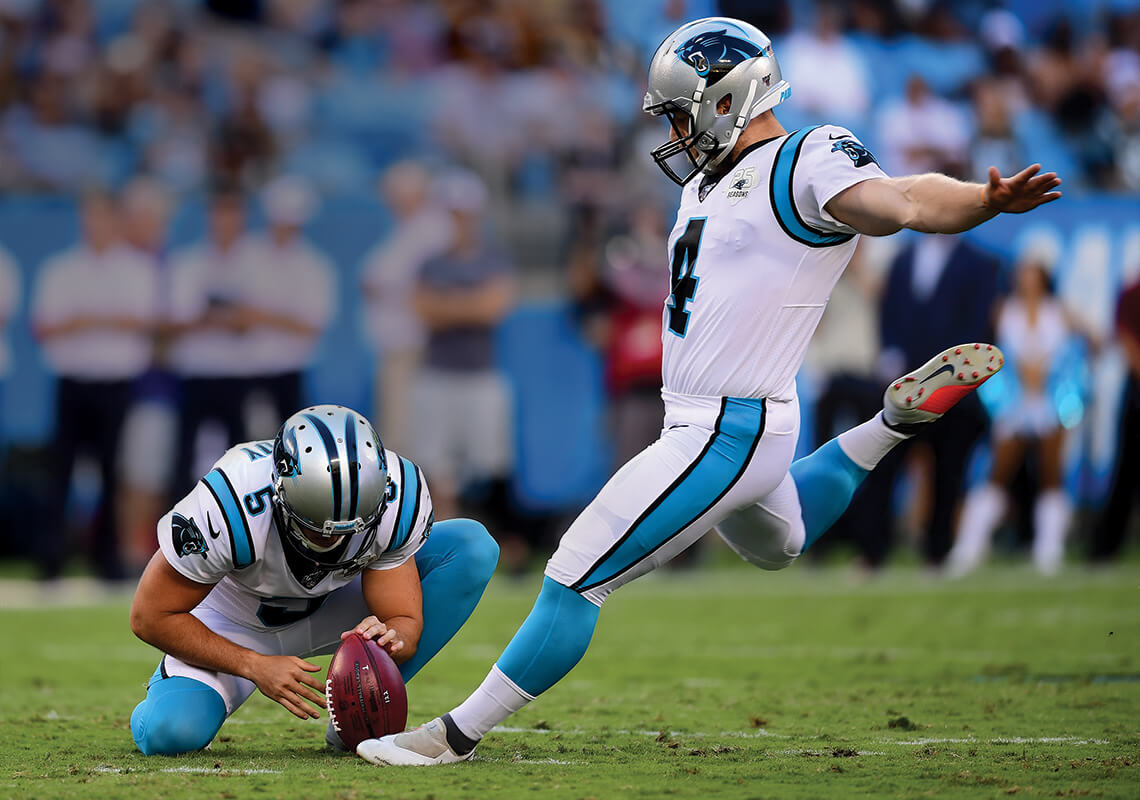 For more than 25 years, football fans in North and South Carolina have rallied around the NFL team they share: the Carolina Panthers. In 2004, Linebackers Coach Sam Mills was battling cancer when he delivered an emotional pregame speech, telling the Panthers to “keep pounding.” Mills passed away the following year, but his words live on, especially during the home game tradition of beating the “keep pounding” drum. They inspire players, like kicker Joey Slye, and fans alike, reminding them to stay the course and never give up. 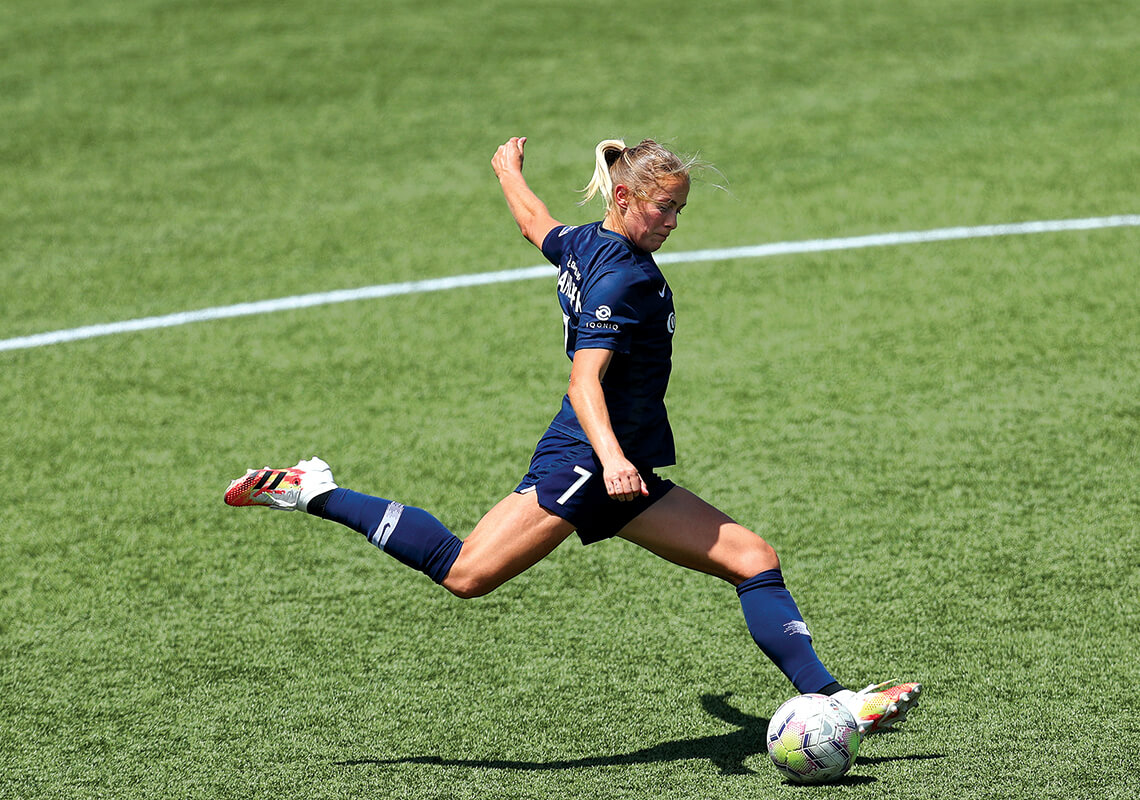 When the North Carolina Courage moved to Cary, they joined a strong tradition of women’s soccer in the state. Since UNC established its renowned women’s soccer program in 1979, North Carolina universities have fielded a number of notable players and coaches. In 2017, entrepreneur Steve Malik bought the Western New York Flash and relocated the team to the Triangle area as the Courage. As part of the National Women’s Soccer League, defender Abby Dahlkemper and her teammates represent North Carolina at the sport’s highest professional level. 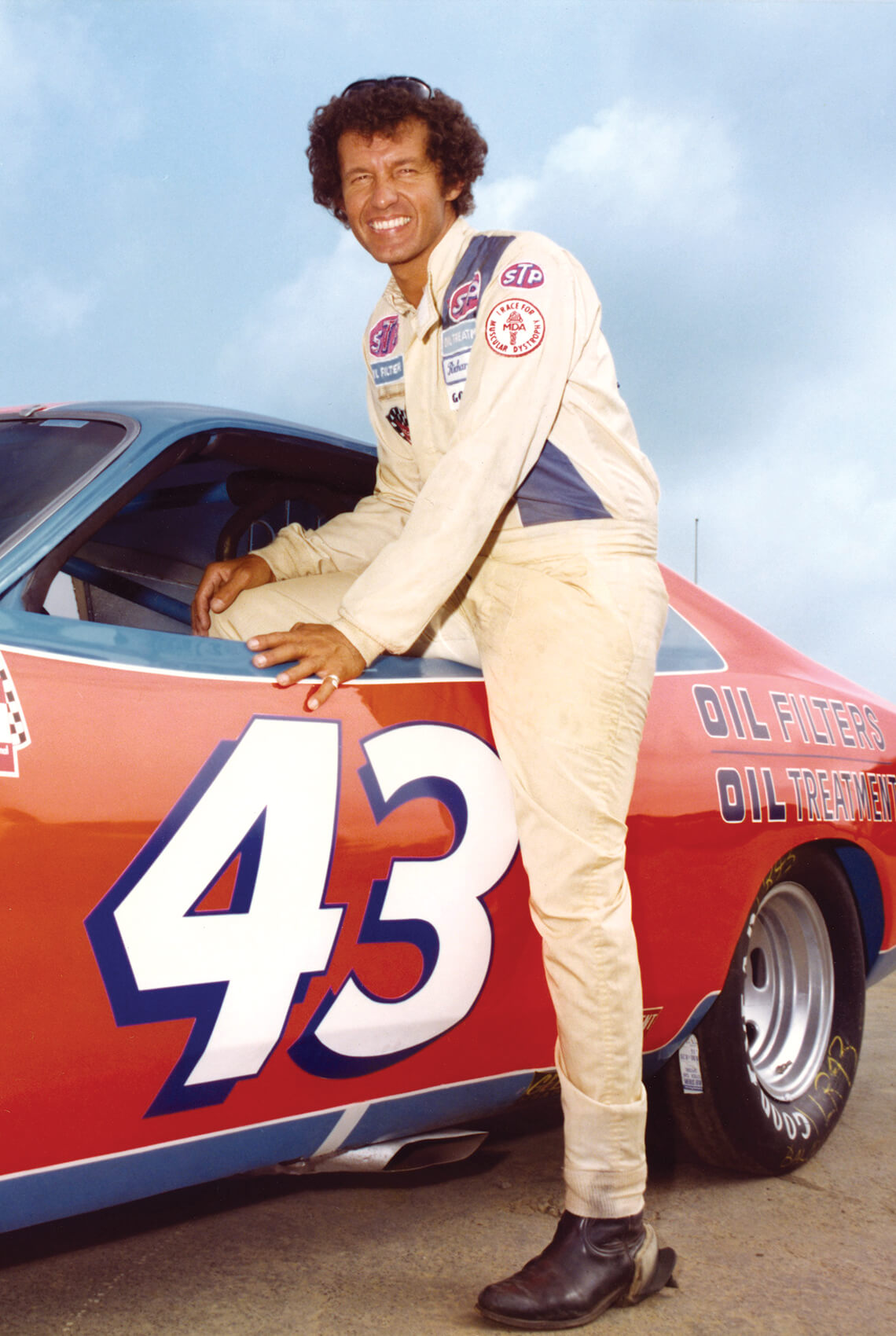 Many NASCAR drivers wore cowboy boots in the 1970s, but “Petty was definitely one of the first,” historian Daniel Pierce says. photograph by DOZIER MOBLEY/CONTRIBUTOR/GETTY IMAGES SPORT CLASSIC 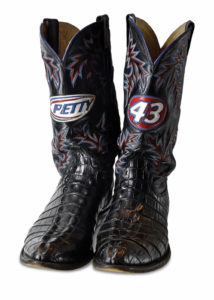 Petty’s M.L. Leddy boots are handmade in Texas and based on a mold of his foot. photograph by DAVID J. BECKER/CONTRIBUTOR/GETTY IMAGES SPORT

Every North Carolinian knows the look from head to toe. Cowboy hat, sunglasses, big belt buckle, Western boots — a uniform adopted over Richard Petty’s long driving career, from 1958 to 1992. Early on, the Randolph County native represented a new era for NASCAR, which was shifting away from its bootlegging roots: He was clean-cut, a family man with broad appeal. And his appearance was part of that. “People today know who Richard Petty is, but if you were around in the 1960s and ’70s, he was the king,” says NASCAR historian Daniel Pierce, who remembers seeing “Petty for President” bumper stickers everywhere in 1968 and ’72. As much as fans love Petty’s signature style, Pierce says, more important was the fact that he won. “He had the look, and he backed it up on the track.” 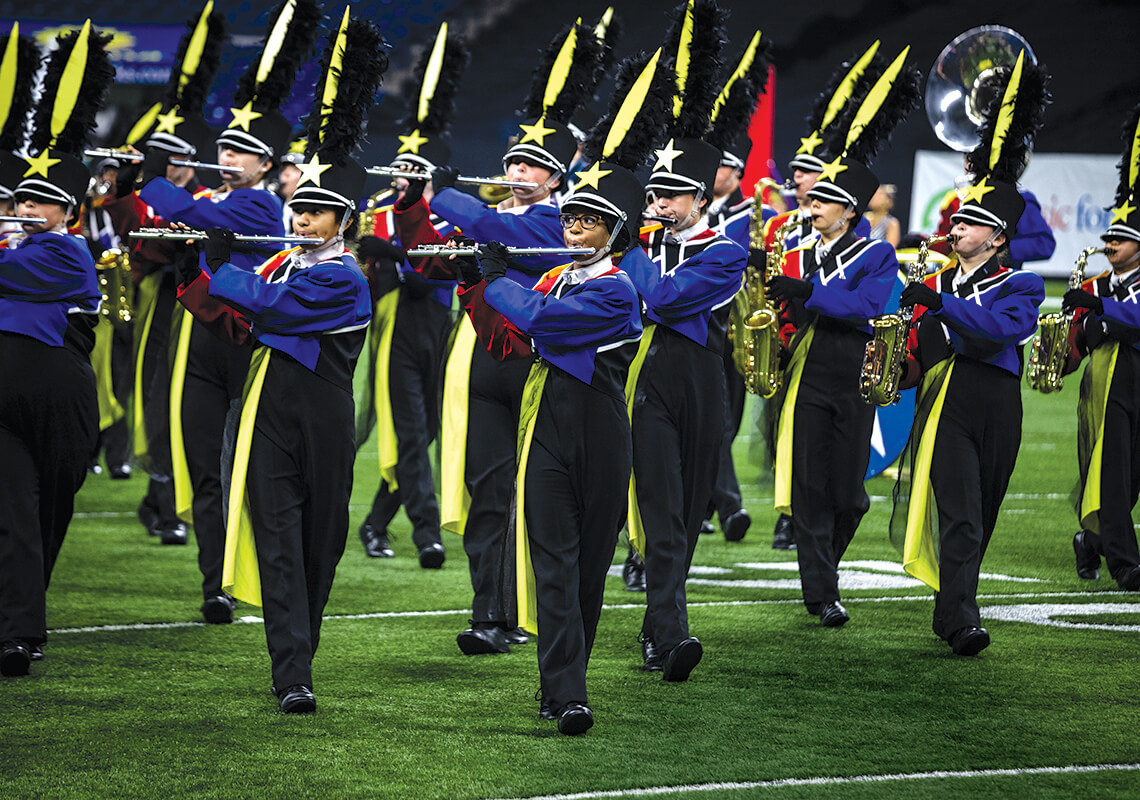 The Marching Patriots move with intention, stepping forward, backward, sideways — and never missing a note. As they cluster and fan out, the whirling color guard weaves around them, a fluid complement to the musicians’ precise formations. In addition to football games and pep rallies, West Carteret High School’s marching band has represented Morehead City at competitions and parades across the state and around the country. At home and away, the Patriots perform with pride, flags and batons twirling, brass instruments flashing under the stadium lights. 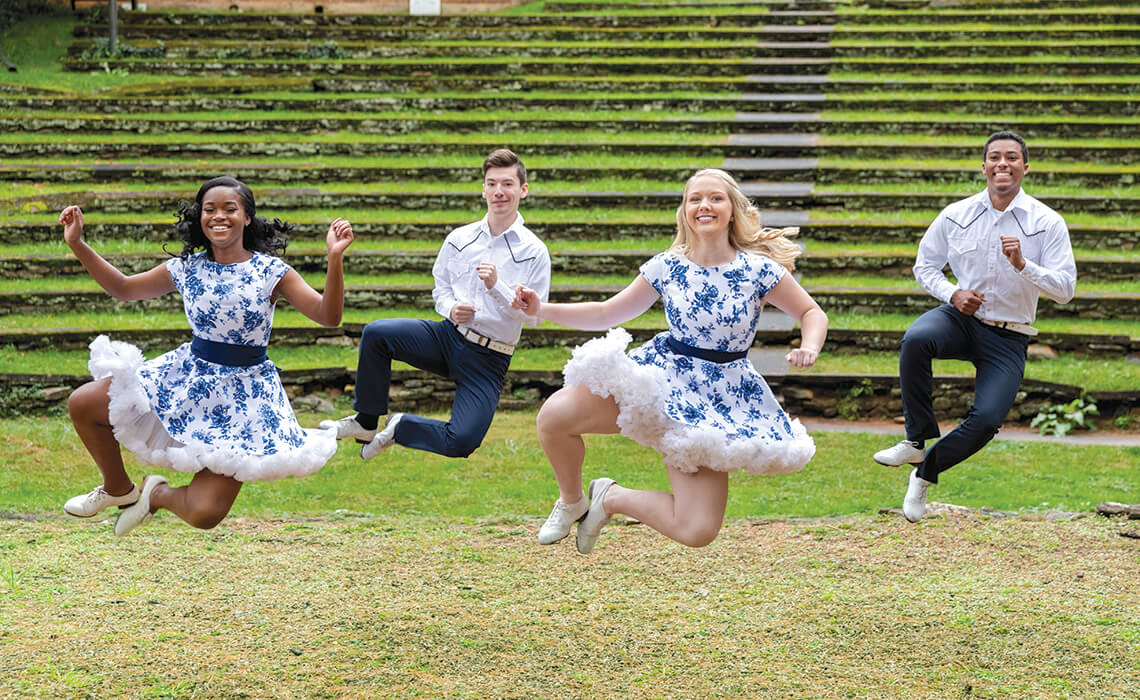 When the Bailey Mountain Cloggers — including (above, left to right) Tykasia Davis, Bailey Clayton, Rachel Sealy, and Enrique Rodriguez — perform “precision” clogging, they dance as one, the metal taps on their shoes punctuating each movement in unison. “Freestyle” means that everybody’s doing something different. For a “big circle smooth” dance, they wear soft shoes to glide across the floor. These styles and many more are woven into BMC’s repertoire, which blends old and new to keep mountain dance traditions alive. Students at Mars Hill College (now University) founded the team in 1974, paying homage to a local squaredancing group started by musician and folklorist Bascom Lamar Lunsford in 1950. Today, BMC is one of only a few competitive collegiate clogging teams, often traveling internationally to learn the dance traditions of other countries, spread the word about clogging, and serve as ambassadors of Southern Appalachia. 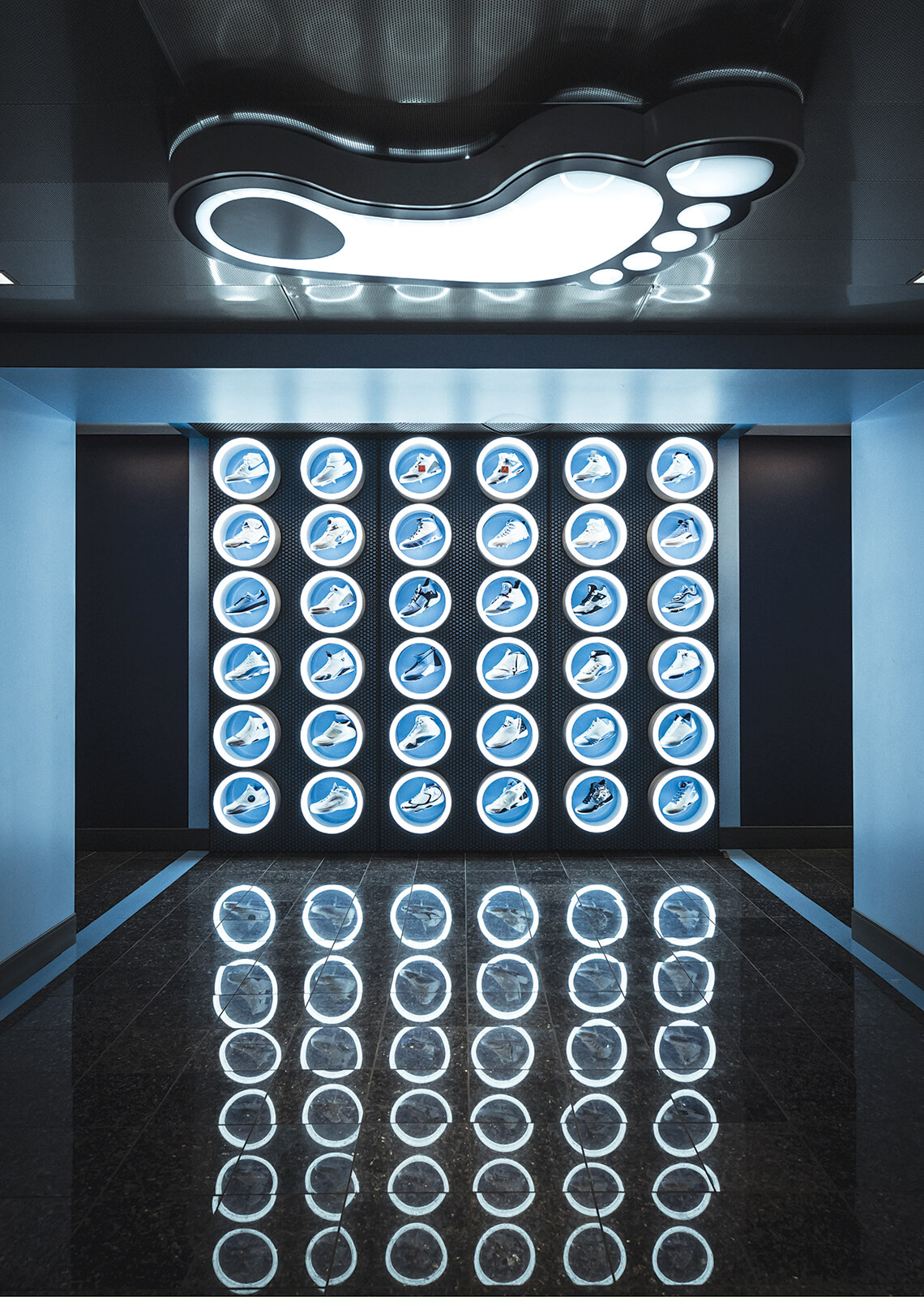 In 2016, the University of North Carolina at Chapel Hill unveiled its brand-new basketball locker room complex, named for the late Coach Bill Guthridge. The team had been in the same building for more than 30 years, says Steve Kirschner, a director for athletic communications, and it was time for some updates. Tucked between the training area and the weight room is something you won’t see on a public tour: A blank wall became a tribute to UNC’s most famous player, Michael Jordan, featuring every Air Jordan edition in Carolina blue. The wall of sneakers honors UNC’s ties with MJ and Nike — “something that no other school in the country has,” Kirschner says. It’s especially meaningful for the players, who grew up admiring Jordan and his namesake shoes — “and that connection deepened when they came to UNC.” 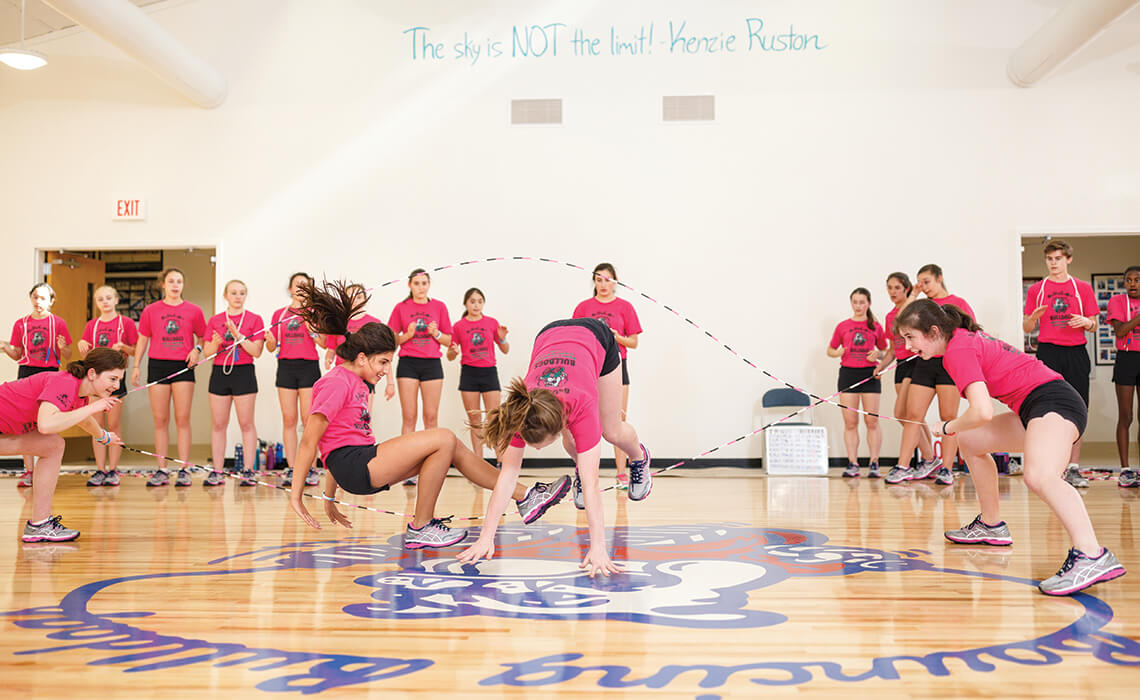 On the border of Durham and Chapel Hill, the Bouncing Bulldogs learn fancy footwork and life lessons inside the world’s first gym built just for jumping rope. Coach Ray Fredrick Jr. started the not-for-profit competitive jump rope team in 1986 while teaching physical education in Durham. Together with a handful of Bulldog alumni turned coaches, he helps 160 boys and girls, ages 5 to 26, learn synchronized skills, acrobatic maneuvers, and dance moves — all while jump ropes whiz around them. The team travels the world, winning awards with skills like “Subway” (pictured above): As Shalini Stockmans (left) jumps on her back, Jenna McKee (center) moves over her while jumping in a pushup position, and Anna Furlong (right) turns the double Dutch ropes. Over, under, up, and down, the Bulldogs move together, as a team. 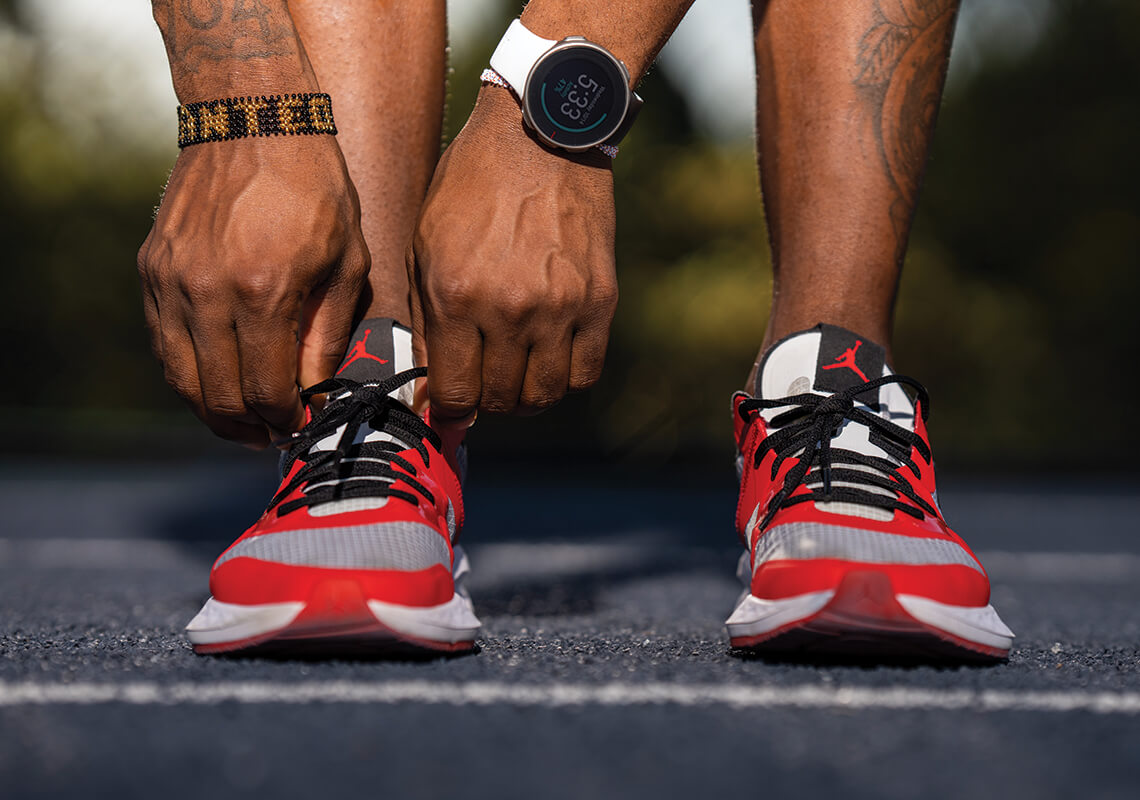 Olympic sprinter Manteo Mitchell hopes to qualify for the upcoming 2021 Summer and 2022 Winter Olympics after suffering a broken leg during the 2012 London Olympic Games. photographs by Derek Diluzio 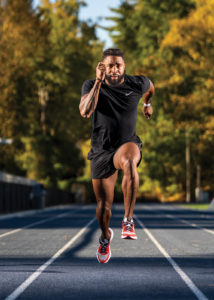 Growing up in Cleveland County, Olympic sprinter Manteo Mitchell was always on the move, but he didn’t take running seriously until an injury sidelined him from his high school football team. Training for track is tough, he says, but “there’s such a reward on the other side. I still thrive off that initial feeling I got when I won my first race.” After graduating from Western Carolina University, Mitchell earned international attention during the 2012 London Olympic Games, when he suffered a broken leg during a preliminary round of the 4×400-meter relay — but finished the race anyway and helped Team USA earn a silver medal. Now living in Asheville, he’s added bobsled to his training regimen — “still running, just on ice,” he says — and hopes to qualify for the upcoming 2021 Summer and 2022 Winter Olympics. Wherever he goes, he carries a piece of North Carolina in his name, and he’s proud to represent his home state. “I’ve been to almost every place you can imagine, but I get to call North Carolina home,” he says, “and that’s very near and dear to my heart.” 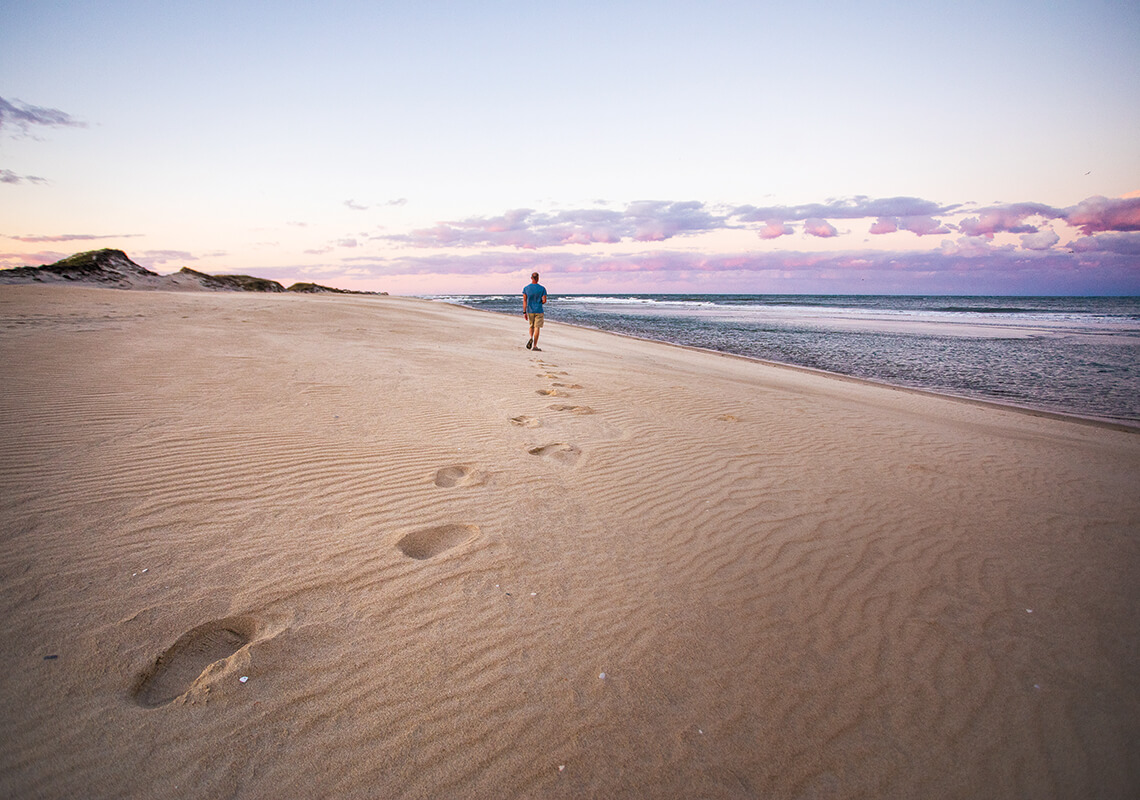 Toes in the Sand

To walk barefoot on the eastern edge of our state, sinking into the sand where the land meets the vast Atlantic, is to become one with North Carolina. Ahead, the wide-open beach unfurls, inviting quiet reflection. Behind, the tide washes away our tracks, creating the beach anew. A walk on an undeveloped stretch like Coquina Beach (pictured above), eight miles south of Nags Head, is a reminder: Exploring our wild, wonderful state on foot is good for the soul.