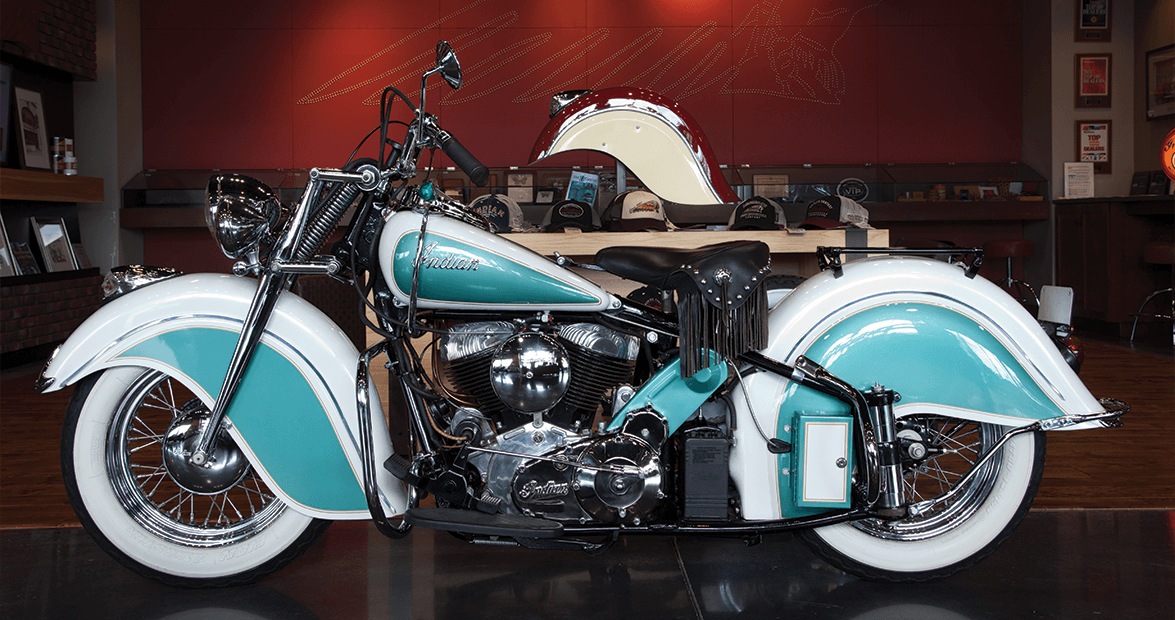 “He applied a little too much front brake,” says Stephen Markley about a former colleague he’ll only identify as John, “and he ended up sliding into a wall.”

That was a scene from the early days of Indian’s North Carolina revival, when a small group of men and women huddled inside a nondescript former paper warehouse in Kings Mountain. They had a big task: rebuild one of the world’s most iconic motorcycles. From scratch.

Problem is, Indian Motorcycle, the company, has a history of crashing. The original started in Springfield, Massachusetts, in 1901, when two men strapped a single-cylinder engine to a bicycle frame. Two years later, as Harley-Davidson was forming, Indian set the world speed record for a motorcycle: 56 miles per hour. Indian began introducing some of the flourishes that made it legendary: scalloped fenders, tasseled leather, and a meant-to-be-noticed round headlight. Steve McQueen rode Indians. The logo is pure Americana. Industrial design students still ogle the frame. But the company couldn’t keep up with Harley, and it declared bankruptcy in 1953.

Several companies tried to do something with the Indian name. It ended up on mopeds, but mostly made appearances in bankruptcy court. In 1999, a company in California started making brand-new Indian motorcycles again. It ran out of money four years later.

Enter Stellican, a British company that snaps up iconic but hard-luck brand names and tries to use them to build viable companies it can turn around and sell. In 2006, Stellican bought Indian. Then it had to build the bike.

When it came to finding a place to do that, Stellican chose Kings Mountain. It helped that nearby Charlotte had a direct flight to London. It helped that state and local governments handed over incentives. But the magic ingredient was craftsmen. People who make things — who can take raw materials, no matter what they are, and make them into a working piece of art.

“We call them artisans,” says Mark Moses, a former Indian employee who now owns the flagship Indian dealership down the road in Lowell. “The folks in the furniture industry, the textile industry, were very in tune to small details, and that’s what made a difference in this motorcycle.”

Watch an interview with Stephen Markley and Mark Moses about the history of Indian Motorcycles. The story continues below.

Start to finish, every bike was built by hand. Inside a brown and nondescript former paper warehouse, two people started with the engine, then built around it, rotating through a U-shaped assembly line, of sorts, on the floor. At the next section, they’d pull more pieces from bins and racks and add them to the chassis: handlebars, chrome exhaust, leather seats, headlights, bolts, belts, and tires. Eight hours later, stacks of parts became a bike. And that’s how Indian was reborn, two or three bikes a day, all built by two people at a time. “It was a challenge,” says Markley, a chassis engineer from 2007 until 2010. “It was the best job I ever had.”

It couldn’t last. Indian aimed for the high end of the market, and had the misfortune of coming out in 2008, at the time the bottom fell out of the economy. But the revival caught the eye of Polaris, which bought the company in 2011 and moved the manufacturing to its plant in Iowa. This time, Indian’s story continued with a move instead of an auction.

From the saddle of his black-and-tan-tasseled 2010 Kings Mountain-era bike, Markley talks about the little things that make an Indian an Indian. The brake lines are stainless steel. The valve covers have indentations, like bottle caps. The leather is the good stuff, the kind you get in a baseball glove, all coming from the same supplier that made it for Indian in the 1930s. He’s never been prouder of anything he’s helped create. It’s a beautiful machine, the metal, glass, chrome, and rubber molded by a few good North Carolina hands into something powerful and graceful, something new that feels like something you always knew.