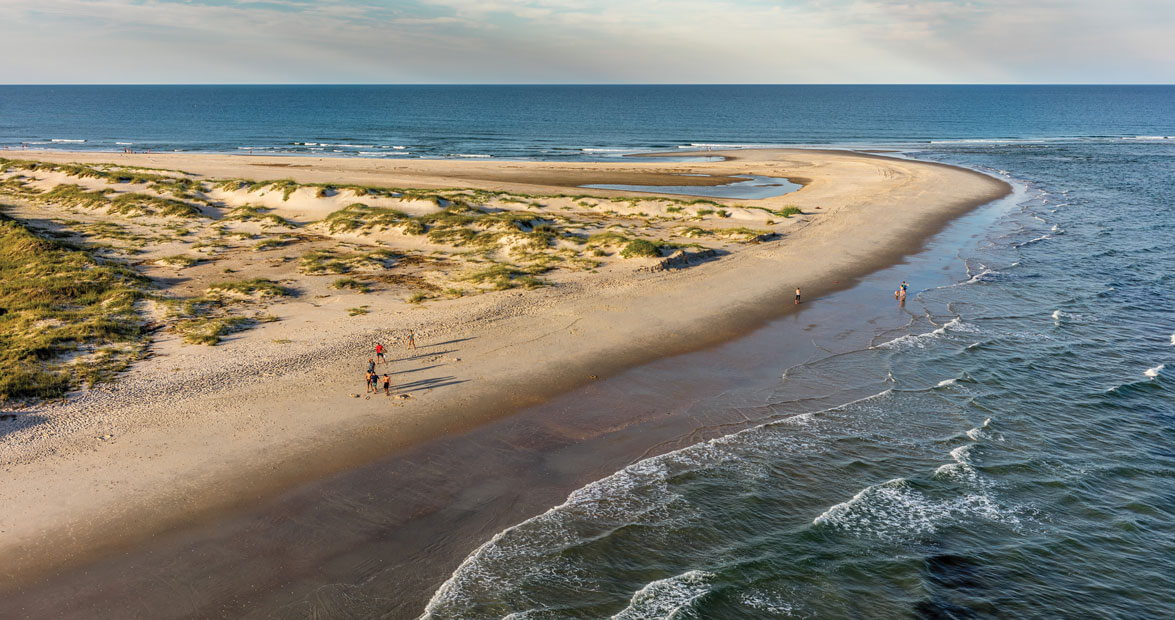 The greatest of all the shores I know are our long, sandy strands, the last sandbars before Africa, the islands of the Carolina coast. Whether we go out to them only a time or two, or steadily for 60 years, whether we find fish or first love or family life through the generations, the devotional, even reverential qualities of voice are in the air when we North Carolinians mention our jaunts, our stays at the beach, by which we mean the islands.

What a gift of the gods, to have been given time to look out and to stride endlessly upon them, to drift off at night and awaken in the morning to the sound of ocean waves crashing. To be in love out in this great wide open. To all but melt into the ocean-washed sands of islands with names like Bodie, Pea, and Hatteras; Ocracoke, Portsmouth, and Core Banks; Bogue Banks, Bear, and Bald Head; Oak, Ocean Isle, and Bird. Even the litany of these few, spoken aloud, has about it the sound of a prayer.

An answered prayer, indeed, for the millions of us who have been baptized by immersion in the foamy brine of breaking waves, knowing forever what it is like to long for blue crabs and salty oysters, and the balm of summer breezes off the evening sea, and, too, the astringent winds out on the beach in late December, not merely laced but fully laden with salt. 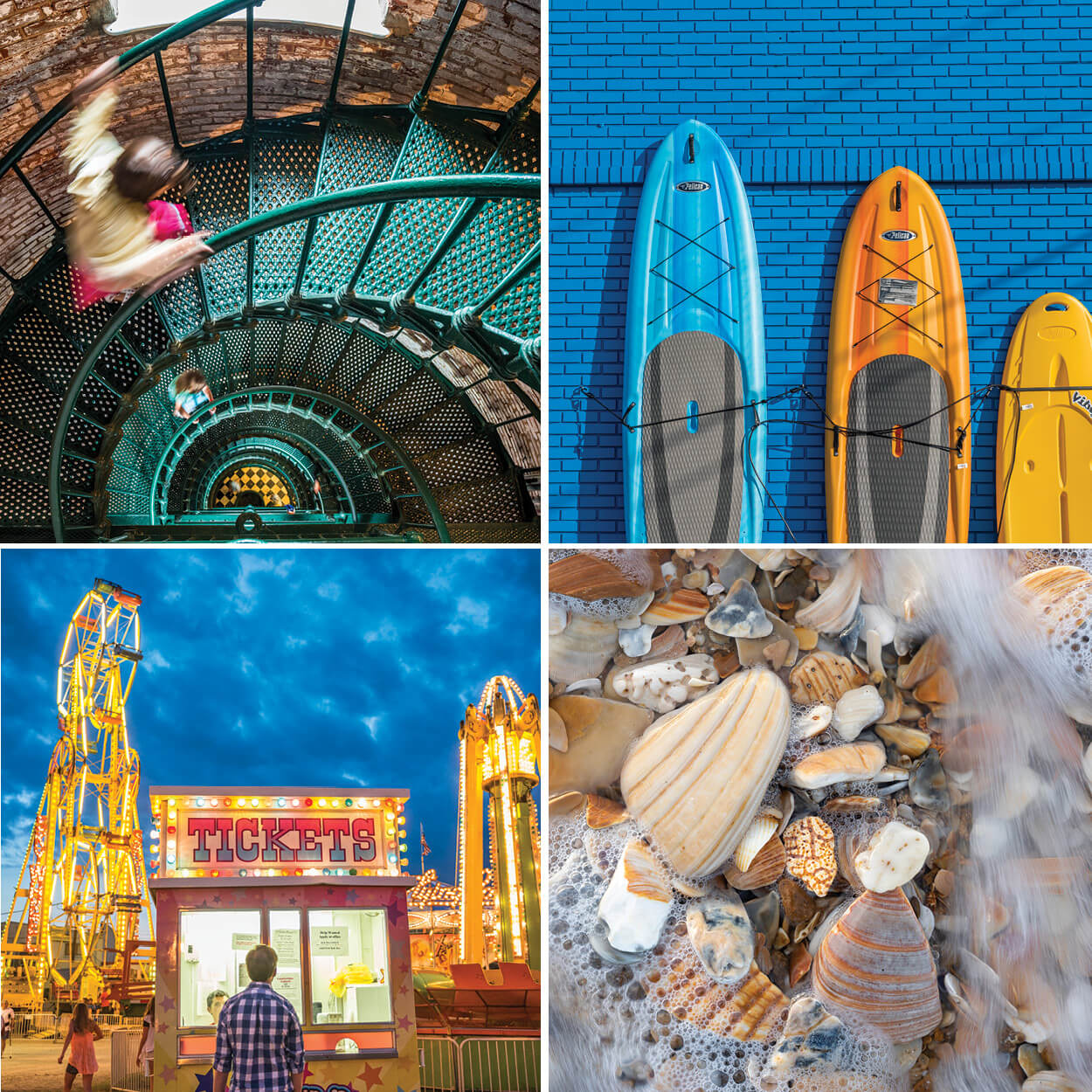 Kids bound up the 214 steps of the Currituck Beach Lighthouse; paddleboards at a surf shop in Manteo await their next adventure; a foamy shell hash gathers collectible sea fragments; get your tickets to the Carolina Beach Boardwalk Amusement Park here. photographs by Emily Chaplin & Chris Council, Mark VanDyke

Because we literally taste the sea when we breathe — and taste, no less than music, unlocks the past — we could not stay the flood of seaside memories even if we wanted to: the gulls following the ferries from Cedar Island and Swan Quarter out to Ocracoke … the family car stuck in the sand way too close to the high-tide line, a teenage driver looking on in mourning … the sweet soul music of The Tams filling the second-floor dance hall of Nags Head Casino, while others played bingo down below … the sound of footsteps echoing off the spiraling iron stairs as pilgrims climbed up and down the Cape Hatteras Lighthouse … a 10-month-old taking her first steps in a tar-paper fishing shack on the Core Banks strand above Drum Inlet … older children joyfully crying out as they rounded the go-kart track’s tire-rimmed curves at the Atlantic Beach Circle … one cold November afternoon spent drift-fishing New Topsail Inlet for blues … the butterfly migration at Rich Inlet, thousands of them sleeping on the sea oats, each one climbing up the shaft and taking flight as the early summer morning warmed them. 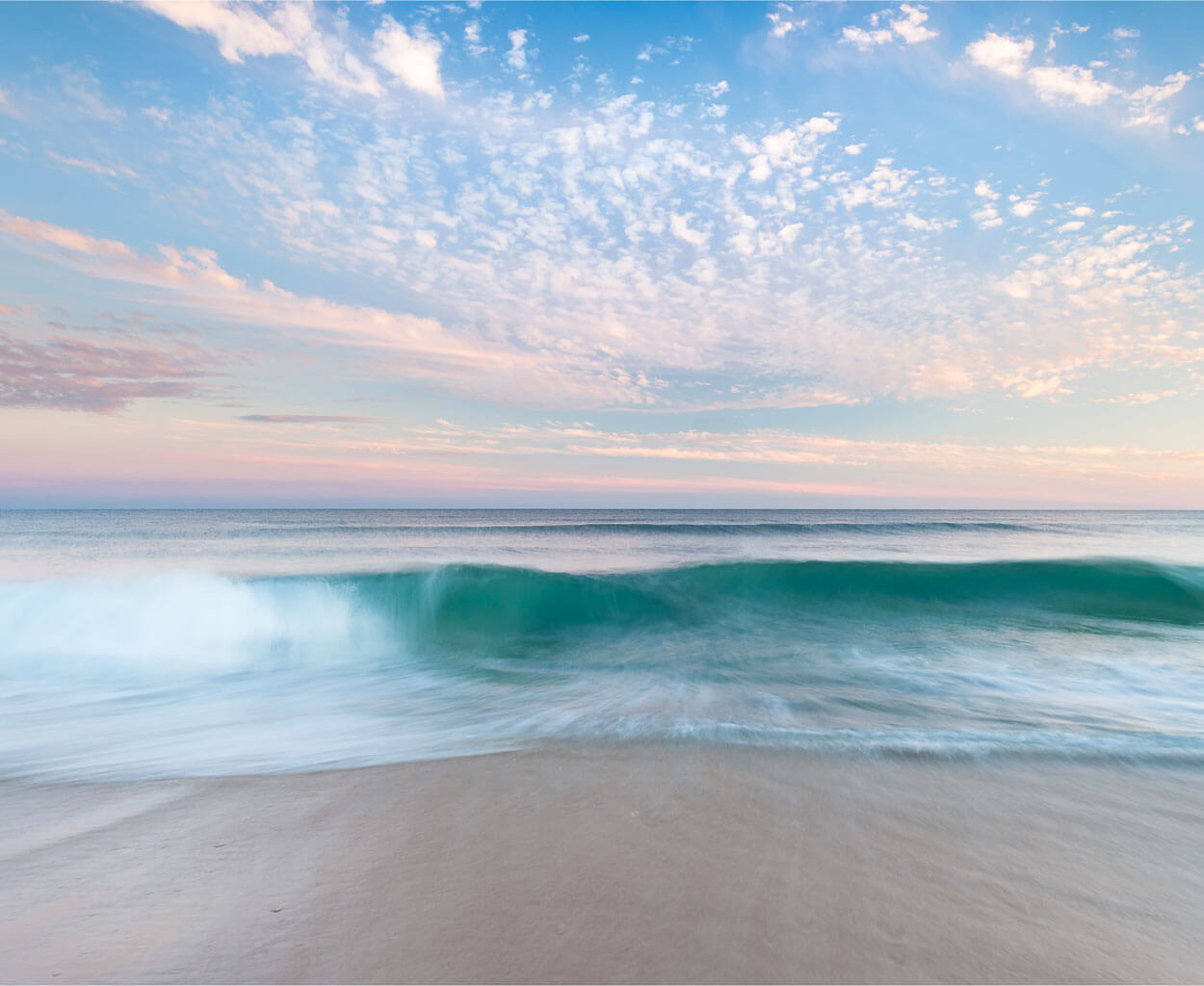 And farther south, the Fort Fisher Hermit, shaking his iron skillet at us, panhandling for coins … king mackerel steaks grilling and shrimp boiling away in a Bald Head Island kitchen … the telling and retelling of how Mr. Lockwood’s newly finished ship drew too much water for it to get out from river to sea at the east end of Holden Beach and, sinking there, gave Lockwood Folly Inlet its name.

How well I recall the ritual crossings of Mad Inlet at low tide (before it shoaled up and closed), from Sunset Beach to Bird Island, then walking about a mile toward Little River and the very southern end of North Carolina, all the while searching for the soulful logbooks in the Kindred Spirit mailbox in the dunes.

Well before any of this — before any of my millions of coastal memories formed — what a remarkable lot of people had already fetched up and lived their lives on these same spots over time. Land-bridge pilgrims found their way across a whole continent and never stopped till they reached our coast. From March to October ever after, they feasted on islands like Huggins, inside Bogue Inlet, and Roanoke Island, leaving acres of oyster shells and fish and turtle bones, and the charred, buried remnants of their campfires at the Wanchese Thicket Lump. Millennia before Ferris wheels and pavilions and shag dancing and pier fishing on Topsail and Nags Head, Native Americans went to the islands to eat seafood and live simply and well. 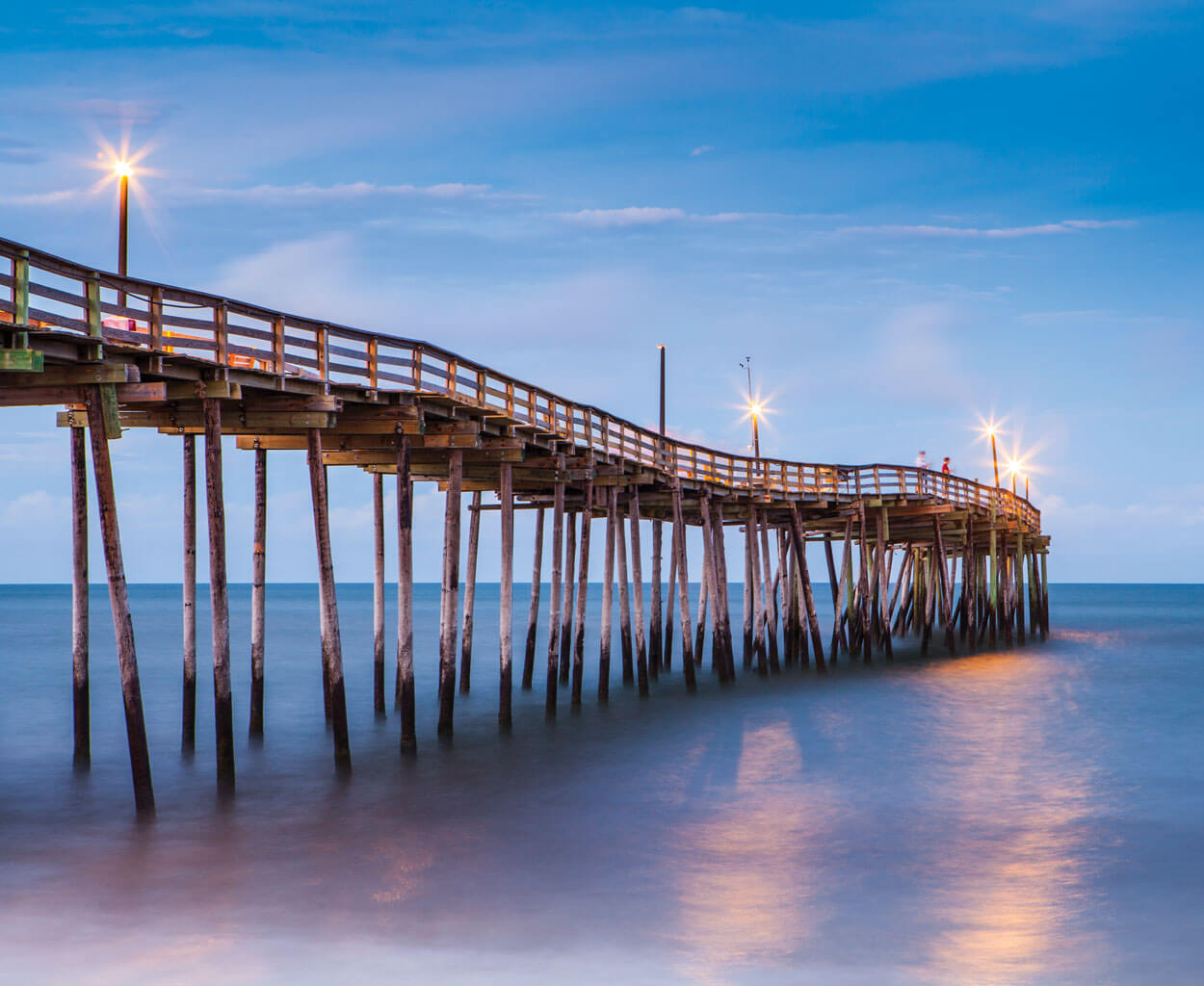 The weather-scarred wooden pier at Avon juts out 665 feet from Hatteras Island. photograph by Jacob A. Hauser

Year after year, we are borne back to the islands, our arms stretched out to the sea and to each other, in rhapsodies we share, in reveries all our own. However well we know or think we know these gloriously plain sandbars and their grassy dunes, the winds and waters play endlessly upon them. Whenever we return, crossing bridges, driving low along the marshes, or taking ferries to reach them, we should remember that they will always be different — no less than we will be — for time and chance resculpt us all. And so we are always getting acquainted anew with the edge of the sea, author and naturalist Rachel Carson’s “strange and beautiful place.” No two visits are ever quite the same, no two tidelines ever matching, and the nighttime phosphorescence in the breaking waves and miles of spindrift beneath the moon are the lights of our lives.