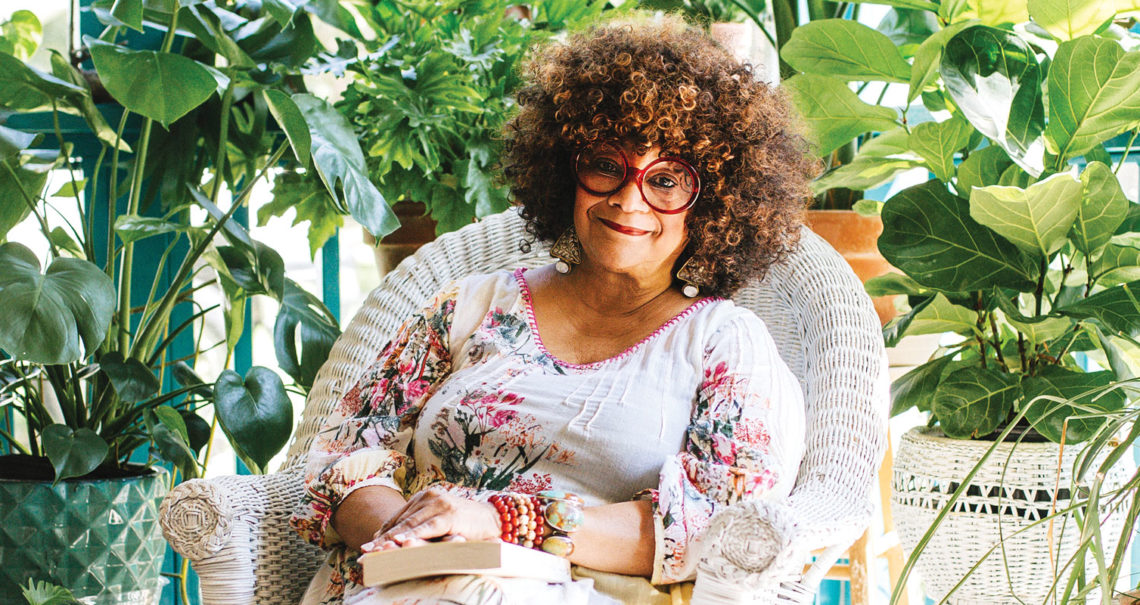 Jaki Shelton Green’s grandmother made magic. During the warm North Carolina springtimes of Green’s childhood, she watched Eva Tate dig her hands into the rich, well-loved soil outside of her Efland home. As spring stretched into summer, beauty erupted beneath tall magnolias: tulips, daisies, and roses of every hue — scarlet, mauve, yellow. At 6 years old, Green was precocious. She’d already begun inventing stories, scribbling words on strips of paper, and now she wondered what would happen if she planted those words as her grandmother planted bulbs. One day, the future poet laureate carefully rolled up her storied paper strips, placed them into small glass jars, and buried them in the ground.

“I’m pretty sure it came from the constant visual of my grandmother, who always had a hoe digging in the ground [and was always] weeding her plants, planting food, and making beauty all over her yard,” Green says. “Maybe I thought those jars would grow, that they would magically become something else.” A few years later, she attempted to retrieve the jars, but they were nowhere to be found. Perhaps the soil had been shifted by rain showers. Perhaps an elder had dug them up. She invented another story: Having recently learned in school about the levels upon levels of subterranean ecosystems that make all kinds of life possible, she imagined that her words-filled jars had transitioned to another subterranean realm.

On a recent Sunday — 60 years after Green planted her first words in soil — she is sitting on a thrifted wicker loveseat on her “Poetry Porch,” wearing a white Moroccan caftan and the oversize deep vermilion eyeglasses that have become a part of her signature style. The Poetry Porch is a screened-in section of her home in Mebane, painted a rich turquoise and cobalt blue that recall the buildings of faraway Chefchaouen, Morocco — a country that Green has traveled to often and considers her second home. Her porch is filled with greenery: birds-of-paradise, fiddle-leaf figs, philodendrons, ferns, alocasias, sansevierias, lush pothos, and finicky jade plants. There’s a vintage teak-hued rattan dining set, several comfortable seats, and whimsical wooden birdhouses handmade by her husband, Abdullateef Fisher, who brings out a small repast of olives, Jordan almonds, and cherries for all to share.

“It lit something inside of me: I wanted to have my words on vinyl.”

Like the words she buried in her grandmother’s yard, Green’s craft has transformed since she published her first poetry collection, Dead on Arrival, in the early 1970s. She’s since published a play and seven more poetry collections, including i want to undie you in 2017. Green was inducted into the North Carolina Literary Hall of Fame in 2014, and four years later, she became North Carolina’s ninth poet laureate — the third woman and first Black person to gain the honor. Her appointment changes the laureateship’s history by acknowledging that the narratives of previous white laureates had not yet told our state’s full story.

This year, Green reached another milestone when she released her first spoken-word poetry album, The River Speaks of Thirst, on her 67th birthday, which falls on Juneteenth. She says that the album — the result of community and artistic collaboration — “launches me beyond the realm of the literary arts.” Although Green isn’t known for spoken word, it’s something that she had wanted to do for many years. One of her main inspirations was a 50-year-old spoken-word record by the South Carolina-born jazz singer Arthur Prysock, This Is My Beloved, wherein he recites poems by the 1940s poet Walter Benton. “I used to sit at night and listen to it — it’s just beautiful,” Green says. She pauses and plays the album on her phone. “Listen to this,” she says as Prysock’s baritone voice intones Benton’s words — “I need love more than ever now … I need your love, / I need love more than hope or money, wisdom or a drink” — over a calming flute and sultry percussion. “When I heard it again in the ’90s,” Green says, “I thought, Oh my God, I could do this. It lit something inside of me: I wanted to have my words on vinyl.” 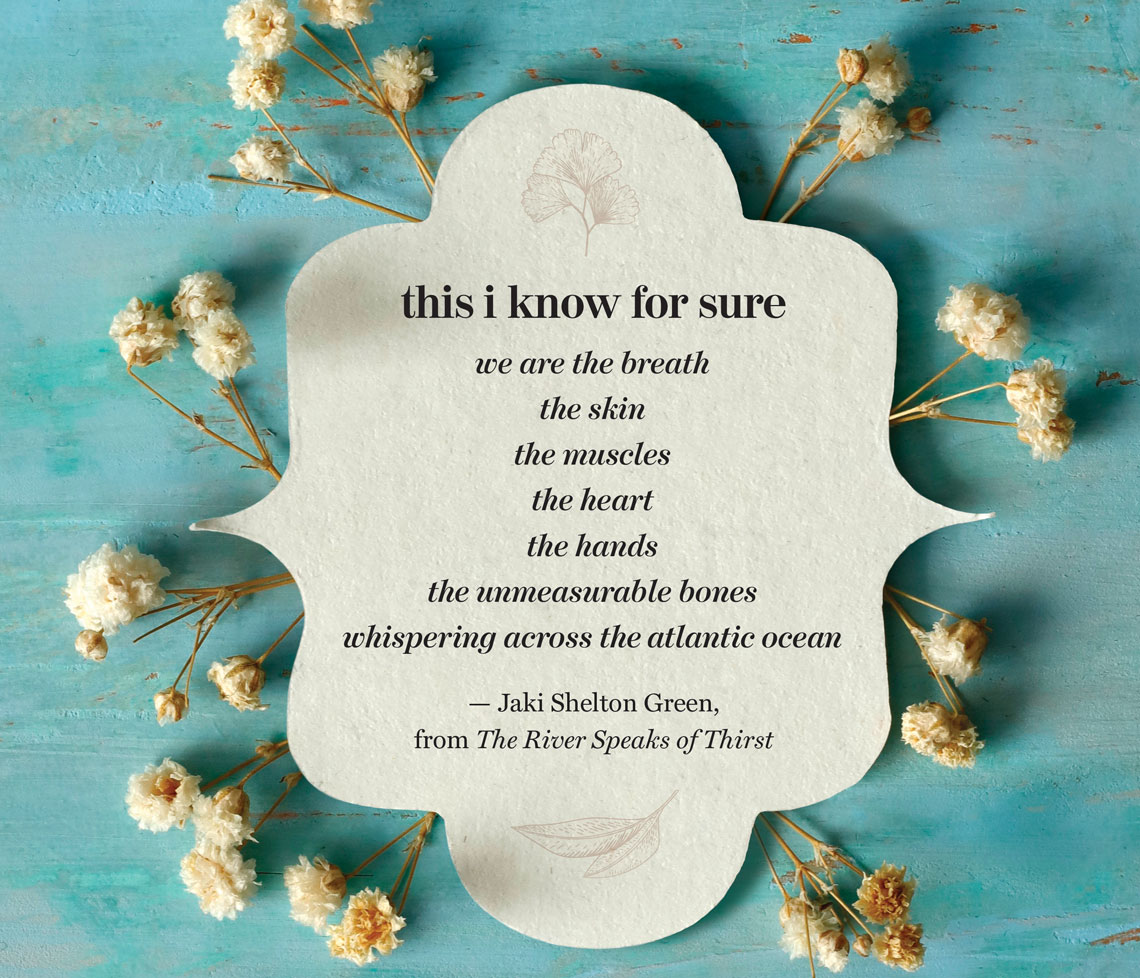 Born in Alamance County and raised in Efland, Green was encouraged to write — first by her grandmother and later by educators — from an early age. By 10th grade, she was attending the newly integrated Orange High School, from which she was expelled for participating in an anti-racism walkout. She then applied for and received a full scholarship to the George School, a Quaker boarding school in Newton, Pennsylvania. She credits the institution with creating a nurturing environment that helped her develop her poetic voice.

Over the years, Green has honed that voice. Ancestry has long been a part of her oeuvre, and, for more than three decades, she has been researching and writing about her paternal ancestors, who were enslaved at the Holt family-owned Oak Grove Plantation off present-day NC Highway 62. “When I’m walking across the grounds of the plantation where my father’s ancestors come from, I hear them literally whispering to me to tell their stories,” she says. “They want to be known. And I want to know them by name.” Green says she thinks about the “spaces we build for our ancestors in our stories” and considers the roles ancestors play and how they inform her writing. “We should always honor the collective ancestors who survived — and those who didn’t survive — the Middle Passage,” she says, “but it is our genetic ancestors that inform our lives.”

For Black people, tracing ancestry can be complex; records are often incomplete. “Sometimes, we’re relying on a story told by a great-grandmother over and over again about Aunt Sue,” Green says. “But Sue doesn’t have a last name. We just know Aunt Sue who white men feared in the 1800s.” Furthermore, many Black people have ancestors of European descent, which means, Green says, “The same seeds of those ancestors may be the seeds that have a foot on your neck in 2020. My landscape looks very different from white men who are writing about the nostalgia of farms or the iniquities of the men who came before them.

“I hear them literally whispering to me to tell their stories. They want to be known.”

“When writers of color are writing about historical oppression and their own familial legacies of oppression,” she continues, “sometimes they’re asked, ‘Can’t you just get over it? Why are you always writing about slavery?’ Those people never ask white people why they write about slavery.” Perhaps what they do not understand is that telling ancestors’ stories is a part of generational healing.

As Green talks on the Poetry Porch, her brother, Jerald, pulls into the driveway in his truck. With mask in tow, he’s here to visit Mama Ivory, their 103-year-old mother who lives with Green and her husband. Before the pandemic, Sundays often brought many visitors into their home, but on this day, the change in routine is palpable. Green has also changed her routine as poet laureate. Before March, she spent her time traveling the state, meeting with people at public libraries, grade schools, colleges, and universities; in nursing homes and retirement villages; at juvenile detention centers and Upward Bound programs. Now, she reads her poetry and leads seminars and workshops for virtual audiences.

Green sees the pandemic as “a new portal.” “Covid has put us in a different arena,” she says. “I am inventing new ways to be. I’m repackaging how I work in the world. It’s fascinating to be able to get up at 7 o’clock in the morning and do a Zoom with a seventh-grade poetry class in Saudi Arabia, a group of high school students in Morocco, or inquisitive young poets from Spruce Pine Montessori School in the hills of North Carolina. I’m learning how to be in the world differently.” What else gives her hope? “We can drag all that crap with us: our racism, classism, homophobia …” she says, or “We can see this as the universe creating a way for us to create a different kind of well-being in the world.”

She remembers how her grand-mother’s garden gave her a different way of being in the world, too. Gardening was her therapy. “Whatever she went out there to dig away, when she came back in, she was at peace,” Green says. “Even though I could not intellectualize that as a child, it was transmitted to me. And the natural world still guides me, helps me work through, helps me write and be a creative being.”