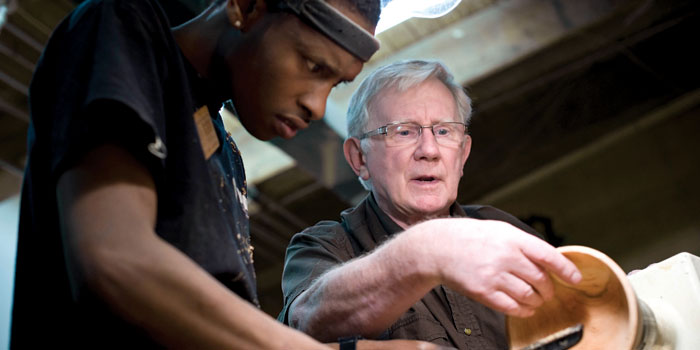 Standing at a lathe machine, 16-year-old Dominic Tolliver scrapes back and forth along a two-inch piece of oak. Spinning fast, the hard-edged block becomes a smoothly curved bottle stopper.

Jeffrey Davies watches nearby. The 75-year-old native of Wales and the high school student from Wilmington form an unlikely pair, bonded over a common language of spindle gouges.

They are working on the day’s project inside a historic brick building in downtown Wilmington that houses Kids Making It, where Davies is an instructor and mentor. Tolliver comes to the workshop nearly every afternoon to stay out of trouble and earn some extra spending money. Wood turning has taught him how to be more patient, he says — “how to do stuff right.”

Davies, who lives in Brunswick County, took up wood turning a decade ago when he moved to North Carolina’s mountains from Europe. The retired engineer calls himself the Welsh Wood Turner and specializes in working with North Carolina green hardwoods. But it’s his work with at-risk youth that makes him unique.

Davies turns walnut into bowls and troubled teens into artists.

It seems like an unusual way to connect with young people, through routers, drill presses, and saws. A similarly unexpected confidant for the kids, Davies, a white-haired grandfather with a foreign accent, spends time with them most days after school.

“Some of them see me as an old fogy,” Davies says. But it works. “We talk about why we are who we are. Sometimes, it’s about woodworking, but it’s all sorts of things in life.”

When the school day ends, teens in the program make their way to the workshop, coming from different parts of the city. They head to the art studio to paint birdhouses and CD cases, to a back room where a computer runs a three-axis router, or to the main wood shop. The smell of fresh-cut wood permeates the building, and loud buzzing churns from the machinery. Fronting the maze of work studios, a small retail store displays the kids’ projects. From there, shoppers can buy butterfly houses or stools.

When the teak deck of the Battleship North Carolina in Wilmington was pulled up and replaced, some of the wood was donated to the teens, who fashion pens and clocks out of it.

The kids make the profit on whatever they sell, so they learn about pricing and selling.

Davies became involved with the group after moving to the area in 2006. He’d taken up wood turning as a hobby several years earlier, so he joined the Wilmington Area Woodturners Association. A member told him about Kids Making It, and he stopped by to volunteer.

Now, four afternoons a week, Davies, in his straightforward yet patient way, guides the teens through woodworking techniques that go back generations.

“You get satisfaction out of teaching the kids things,” Davies says. “Some come in and say, ‘We want to do it.’ Some come in from agencies in the city who have kids that are in need of this kind of stuff.” Not all of the teens come from troubled backgrounds — some find out about the program from friends or teachers.

But many are referred by school counselors, the juvenile court system, or group homes. The organization has a social worker who makes home visits. The group tries to get an idea of what the teens want to do with their lives, and then, over a table saw, they try to figure out how to get them there.

One young woman, now 24, started at the shop when she was 14 and recently got accepted to a Le Cordon Bleu culinary school. Another student who started at 16 just finished up his freshman year at East Carolina University after figuring out he wanted to be an architect while at Kids Making It. Program leaders helped put him in touch with a local professional to guide him through his application portfolio.

Joseph Seltzer started going to the workshop when he was 15. A row of his wooden pens sits in the store’s display case with sales tags on them.

While Davies taught him about wood turning, he taught Davies about computer accounts.

“He’s a great teacher,” says Seltzer, who has Asperger’s syndrome. “He shows me the different things he’s made, and it gives me ideas. I do this because it’s therapeutic.” Seltzer, who now attends Cape Fear Community College, several blocks away from the shop, still comes by in between classes. He helps other teens with their projects.

More than 1,500 young people like Seltzer have participated in the woodworking program since it began in 1994.

At home, Davies’s wood shop fills up most of his double-car garage. Plastic sheets hung by a wooden frame do their best to rein in the confetti of wood shavings that coat the floor.

In one corner is a pile of tree stumps that look like they’re waiting to be split into firewood; in Davies’s hands they are reformed into polished bowls and platters. At the center of the operation is an 800-pound lathe, surrounded by carving tools and gouges hanging overhead.

In his sawdust sanctuary, an uncountable number of wood chunks have become pieces that sell at a local art gallery and are entered in wood turning exhibitions.

Davies didn’t get interested in wood turning until he came to the United States in 1999. He moved from Germany, where he took an early retirement, to Hendersonville in the mountains.

He bought some basic tools and went to demonstrations held by the Carolina Mountain Woodturners at the Folk Art Center in Asheville, watching their techniques and practicing at home.

“When I retired and came here to live, that was what I wanted to do, and I’ve been fairly fanatical about it ever since,” he says. A piece of cherry wood in the early stages of becoming a Grecian-style vase sits on Davies’s lathe. Davies has been working on it off and on for about a week in his wood shop.

The still-bulky vessel spins rapidly as Davies’s hands shape it with a hollowing tool to thin down the walls. Slowly, he will shave an urn out of the former log, but the finished product is still unknown. He points out a band of reddish wood emerging around the front from the lighter tan color.

“I’m hoping that that will stay there while I finish the piece,” he says about the deeper red hue. “The wood tells you what it wants to tell you. I like to put a piece of wood up and know roughly what I want to do, but during the process, the wood says, ‘I don’t want to do that.’” It’s that flexibility that makes him a gifted turner as well as a fitting mentor.

“You have an idea,” he says, “and the idea turns into things.”

Check out samples of Davies’s work online at: thewelshwoodturner.com

Vicky Eckenrode is a staff writer for the StarNews in Wilmington.