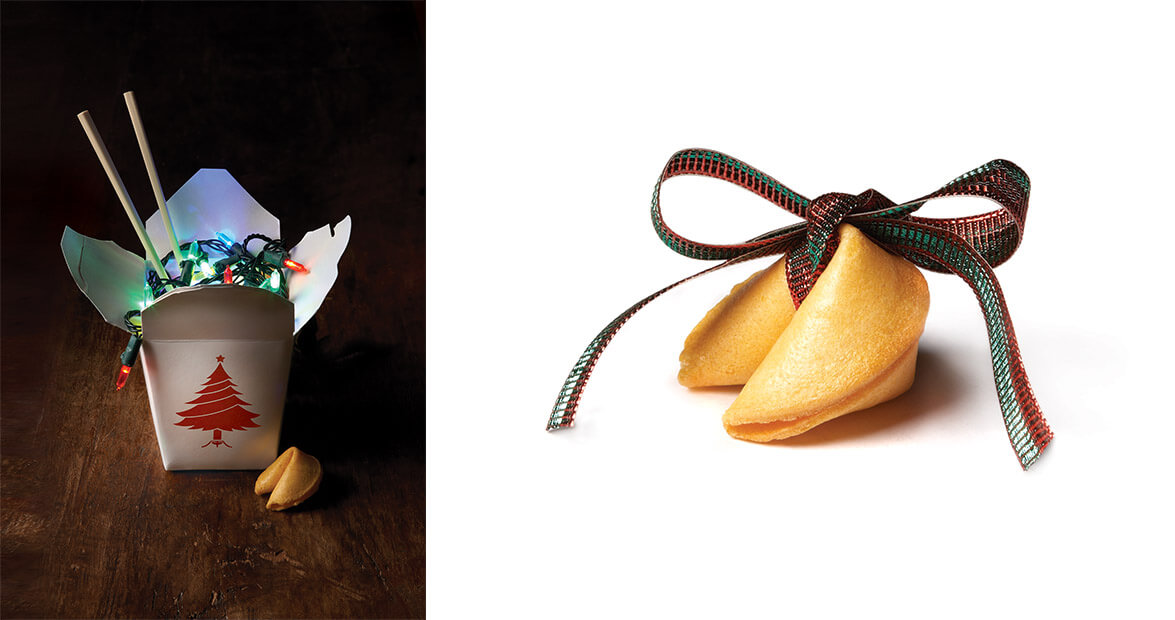 I’m in line at Peking Garden in north Raleigh, picking up only one of the enormous orders packed in aluminum foil tubs and fold-out carry packs, and I see a family gathered around a table.

I’m seized with longing and jealousy. It’s Christmas Eve, and I’m where I want to be: in a Chinese restaurant. But I’m getting takeout, and they are, gloriously, here to stay.

As you probably know, on Christmas Eve and Christmas Day, people with my background — the Jews — go to Chinese restaurants. This has been explained and described many times in tremendous detail. But simply: At the early 20th-century moment when Christmas was beginning to turn from a religious holiday into the American Christian Super Bowl, Jews and the Chinese were large minority groups, and, especially in the big cities of the Northeast, were left out of the party. And so, when Christmas rolled around, Jews — with nothing to celebrate, but on a universal feast day looking for something to do — would go to restaurants run by the other group.

But, um, today? The Christmas of which I speak occurred last year, and waiting at my wife’s mother’s was a houseful of hungry Christians, somehow hankering for Kung Pao chicken and moo shu pork, just like plenty of other highly not-Jewish families. As proof: the orders piled by the counter at Peking Garden, and even the guy picking up the order next to me, who said his family had been eating Chinese takeout on Christmas Eve for a decade, just to avoid preparing two enormous meals in a row.

Two meals? Oy, what I wouldn’t have given for only two Christmas meals. My Christmas Eve Chinese food story is one probably every modern Tar Heel will sympathize with. Take one Yankee-import dad, Jewish variety (me). Add Raleigh-native mom, unaffiliated-and-lapsed-Christian (my wife). Fold in obligatory divorced parents, to say nothing of the slew of aunts, cousins, and grandparents all demanding — OK, merely expecting (though one might say “expecting with extreme prejudice”) — a Christmas gathering. Toss in the various family troubles we all experience, and you begin to develop a list of Christmas memories you don’t necessarily want to share. We had the Angry Santa Christmas; we had a series of Drunken Troubles Christmases; we had the Sobbing in the Other Room Christmases, and the Frightened Children Christmas. But every single year, with meals at Grandma’s and Mom’s and Dad’s and various aunts and such, we had Too Many Christmases. For an extended family full of practicing Christians, all right then. But for a nuclear family with a Jews-to-Christians ratio of 3:1, things stopped making sense.

And every year, we made the same threat: “Next year, we’re just having Chinese food, and whoever wants it can come,” we’d say of Christmas Eve, which, after a series of away-game disasters, came to be hosted in our house. And every year, Christmas would roll around with its attendant amnesia about previous ones, and we’d try to please everybody again, and when it was all over, we’d be toying with another Christmas memory with upper cases and sad faces.

Until Finally, last year, a Christmas miracle. The smallest, weariest announcement that this year we were just planning to get Chinese food caused a  tide of relieved agreement. Everybody would meet at Grandma’s, and we’d bring the food, and there I was in Peking Garden.

Which is awesome, but again: for takeout, not nestle-in, which is the way I yearn to. So I have to tell you — I have to make you understand. By the time I was having my Chinese Jewish Christmases in Philadelphia, this was no catch-as-catch-can accidental meet-up. It was full-on tradition, and it was as revered as Marley’s ghost and A Charlie Brown Christmas.

It’s hard to remember in our modern Utopia of Constant Availability, but back in the day, nothing else was open on Christmas Eve and Day except Chinese restaurants.

I remember walking with friends into  Riverside, in Chinatown, and having the door swing open with a hot breath of steamy salt, soy, and sweat. The same condensation that covers the windows of every Christmas memory from Dickens to The Polar Express trickled down the windows of those bustling eateries. Only instead of homey candles, behind the droplets flickered a buzzing red neon “Open” sign, as welcome and as guiding as the Star of Bethlehem. We unwound scarves and unbuttoned coats — and began shouting greetings to what seemed like half the Jewish population of Philadelphia — though, with an entire Chinatown to populate, you weren’t guaranteed to see people from your particular synagogue or minyan.

“Over the river and through the woods” it wasn’t, but you were home. All through the streets, the church bells chimed, but in the Chinese restaurants, you heard Yiddish endearments and borscht-belt jibes. It was even more than home — it was confirmation that although we weren’t the majority, we counted. We counted just as much.

And, honestly, as much as I’ve loved joining the complex — and, yes, endless — family Christmases (and Christmases and Christmases and Christmases) of my wife’s brood, I’ve yearned for my Chinese restaurants of years past. Not because I felt unwelcome in my married family, but because in those restaurants, I was home. I didn’t have to explain yet again that Chanukah wasn’t Jewish Christmas, and I didn’t have to reassure anyone that prayers in Jesus’ name didn’t offend me, because for crying out loud it was Christmas. Yet in a way, by pleading year after year for Chinese food, I was, in fact, making a small cry of protest. Like the family who picked up their order as I did, I wanted ours to remember: Do we have to do so much?

Isn’t the point just to be together, to laugh and to eat, to be warm, to be grateful that we’ve made it another year, and that we have hopes for, in the future, some kind of salvation? A salvation that might just arrive, hard as it may be to believe, without three different kinds of homemade salad and fingers crossed that whoever it is in your family doesn’t do whatever they do, or anyhow at least not as bad as whoever-it-was did it last year.

So I took our food home, and we all ate — and we all loved it. We pledged to do the same this year, so I hope my people may have made this tiny Christmas gift to my family and to all families: Do a bit less. Let someone else cook. Just relax. Love on each other. Smile. Don’t stress. Eat.

I’ll keep hoping that we make that final step — that we lose even the cleanup and dishwashing, move to the restaurant for the meal, and find in that warm, embracing aroma our own complex family’s home — but if we’re sticking with takeout, I can live with that.

And at the end of the dinner, with the tubs and the paper napkins and the bamboo chopsticks tumbled among the Christmas ornaments and the menorah and the other detritus that make 21st-century North Carolina so agreeably weird, we’ll crack open fortune cookies. Maybe they’ll say “Merry Christmas.” Maybe they’ll say, “Oy, such a holiday you should have!” Or maybe they’ll just say, “God bless us, every one.”