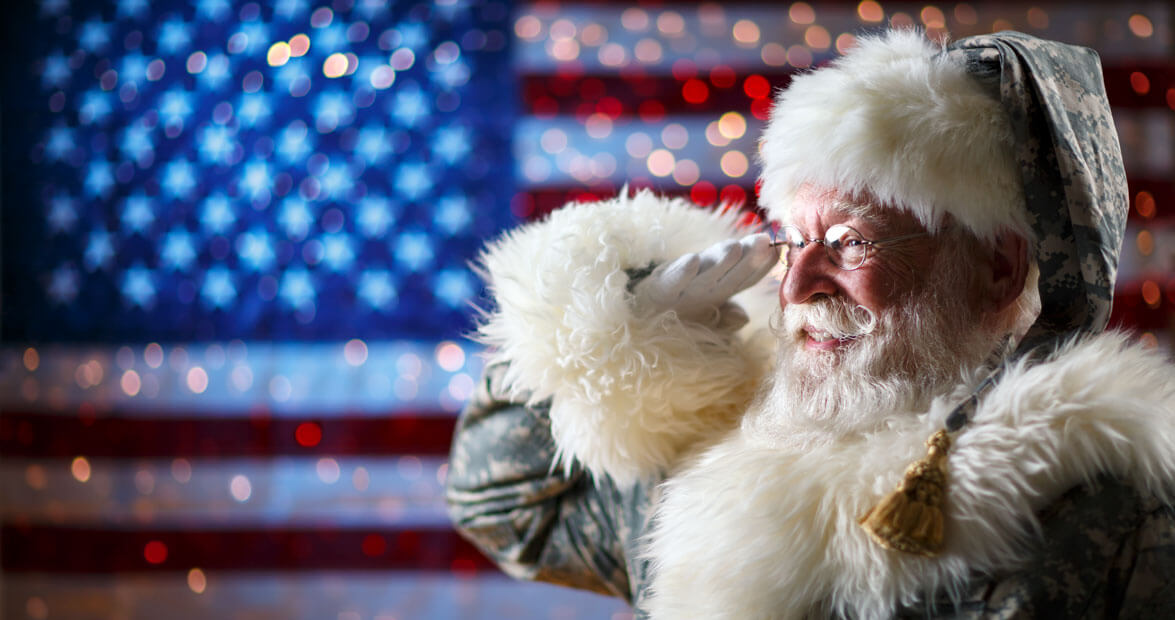 Jim Dyer was having trouble packing his big, bubble-toed Santa boots for an airline flight. It was Christmas 2015, and he was on his way to France to visit the site of the recent terrorist bombings, meet World War II veterans, and visit wounded American soldiers in German hospitals. So he wore the boots instead, along with his green corduroy pants and a red vest. The picture-taking began the moment he got out of the car at LaGuardia (and later, when he got out of the Bentley that ferried him to the ABC and NBC studios).

The engagement was a natural fit for Dyer, who spent 22 years on active duty, including flying helicopters in Vietnam, before retiring as a lieutenant colonel in the Army in 1989. Dyer grew up in the Baptist Children’s Home in Kinston, where he’s now a board member. At 16, he left the home and enrolled at Mars Hill College and, later, UNCChapel Hill, working the entire time. “The truth is,” says Dyer, 71, “I joined the Army — Officer Candidate School — to know where my next meal was coming from. I was starving to death.”

During the ’70s, Dyer and his wife were often the only people on the street without children, and he became the natural go-to Santa. A new career was born. “I love doing the USO, the military functions,” Dyer says; he has a camouflage Santa suit, complete with fur, to play those parts. “Every child who comes up is your child. At that moment, they’re the only child on the planet. You focus on them, and they light up.” Along the way, he felt called to the ministry, and attended the Corporate Chaplains Institute. He was ordained at 55, and meets with employees at businesses to pray, visits the sick, and officiates at weddings and funerals. Four years ago, he was elected to be the state chaplain for the Veterans of Foreign Wars.

Dyer’s role as Santa ranges from the mundane (when he bleaches his beard, he puts cotton balls up his nose and breathes through a plastic tube) to the glamorous (he’s landed a lucrative seven-week gig this winter at Radio City Music Hall in New York City). And his dedication to the red suit has paid off: Earlier this year, he was inducted into the International Santa Hall of Fame — one of only two North Carolina Santas with that distinction.