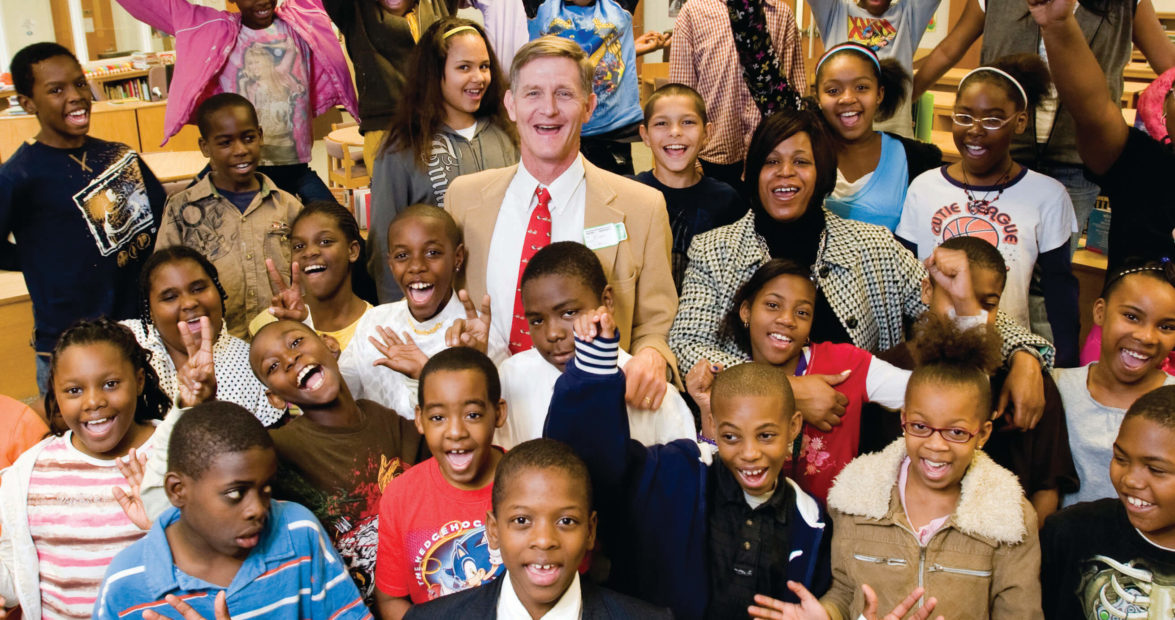 In any courthouse across North Carolina, he’s known as Jimbo Perry, defense attorney. But in Kinston, particularly in any school hallway situated in the southeastern part of his hometown, he’s known simply as Mr. Jimbo.

Duck into a classroom, and you’ll see him — in a suit, glasses perched on the edge of his nose, holding court and talking to students in the acronym lingo he learned long ago from his dad: DYB.

The kids know what it is.

There’s an old bingo parlor in town, called The Gate, that has been turned into a faith-based community center for kids and local teenagers. Jimbo goes almost every Friday. You can’t miss him. He’s tall and gangly, as thin as a spindly young pine. And always, he’s swimming in a stream of children.

On one recent Friday night, with at least 100 teenagers and nearly two dozen volunteers around him, Jimbo sits at a table in frayed jeans, a pullover sweatshirt, and purple Crocs. He plays chess with a kid named Rock.

Rock wears a rubber bracelet on his wrist in honor of his home country, Puerto Rico. He’s 15 and lives with his mother. As they play, Jimbo asks him how he’s doing. Rock rattles off the places he’s stayed in the past year.

Jimbo says nothing. He just listens. But he keeps count in his head, and by the time Rock finishes, Jimbo has a mental picture of Rock’s hopscotch life. During the past year, Rock has stayed in 16 different places.

These are the kids Jimbo works hard to reach.

He’ll tell you he’s learned to “walk beside them,’’ something he first learned from a gap-toothed grandmother named Georgia Kornegay. Jimbo called her Miss Georgia.

She lived catty-corner to Southeast Elementary. They met at church, or maybe the local Piggly Wiggly — Jimbo can’t remember which. But he does remember how long they worked together: a decade.

They walked the hallways of three different schools, this tall white man and this shorter black woman, stopping at classrooms and asking the same question: “Is there anything we can do to help?’’

They read to kids, spoke to kids, and taught them about the importance of reading and writing, hygiene and manners.

And teeth-brushing. That was Miss Georgia’s thing. She’d often lean forward, show the gaps in her teeth and exclaim, “Do you know what halitosis is? I have halitosis. I don’t want you to have halitosis. Now, this is a toothbrush.’’

Miss Georgia gave out one-dollar bills for academic or behavioral accomplishment. She didn’t have money, getting by on a fixed income. Yet, according to Jimbo, she handed out at least $80 a month.

“You’ve got to show them a little bit of goodness,’’ Miss Georgia would tell Jimbo. “These kids don’t have much goodness, and just a dollar in their pockets, that’s a big deal. They got something that belongs to them.’’

Miss Georgia died in 2004. She was 78. Since then, she’s never far from Jimbo’s thoughts. You see that in his office. Taped to a painting beside his office chair is the program from her funeral. On the front is the smiling face of Miss Georgia.

“Literally, I felt like I was with Mother Teresa,’’ Jimbo says today. “I’d think I’d be [in] a church. Not [the] sitting-in-a-pew-going-to-sleep kind of church. No, she taught me how to walk with folks, with no agenda. I realized this was where it’s at.’’

In 2007, Jimbo took an idea to a woman he had known for years, Felicia Solomon, the principal at Southeast Elementary. Solomon had taught Jimbo’s youngest son, Jackson.

Jimbo asked Solomon to help him create a group now known as Little By Little. It’s a loosely organized group, under the umbrella of the nonprofit Partnership for Children of Lenoir and Greene Counties. And in Jimbo’s language, it operates under this simple premise: “Light a candle in a room where it can give the most light.’’

Today, the group has at least 30 volunteer mentors. With help from Kinston’s The Little Bank, it has raised nearly $38,000 in donations to help 40 students at Southeast Elementary earn money toward a college education.

The mentors will work with these students through high school. The goal for next year is to have enough mentors to work with 160 students.

Jimbo, Solomon, and their small army of volunteers work on everything from improving students’ reading skills to bringing in speakers. They coach the kids to look people in the eye and give a firm handshake. And always, they follow the gospel according to Miss Georgia.

“Together, she believed, we could help make a difference and change a generation,’’ Jimbo says.

Kinston is a quaint, hospitable city, a place of nearly 23,000 people beside the Neuse River in Lenoir County. It’s the home of NBA star Jerry Stackhouse, venerable minor league ballpark Grainger Stadium, and the N.C. Global TransPark. It’s also home to the concept of “up the hill’’— a term used by kids and teenagers in southeast Kinston who sometimes don’t envision a life beyond the blocks where they live.

But in this corner of the city, Little By Little is working. The test scores at Southeast Elementary are improving, and kids are earning as much as $250 a year toward their college education. In fact, in 2009, Little By Little helped Kinston earn distinction as an All-America City.

But to Jimbo, it’s not about money, or even awards. It’s all about something he heard from a teenager he calls Allen.

Jimbo saw him at The Gate, perched by a computer. He put his hand on Allen’s shoulder and asked a question.

“Is the dream still alive?’’

“Mr. Jimbo, as a matter of fact, it is,’’ Allen responded. “Just last night, I dreamed I was working on inventing some kind of space fuel, and after working all day, I got in my Mercedes, picked up my wife and two children, and went for a nice meal.’’

Students involved in Little By Little talk about becoming a lawyer, an actor, a welder, a rocket scientist. And that’s a good thing, because in southeast Kinston, these kids are just trying to survive.

Jimbo knows them all by their first names.

Jimbo Perry has been working with kids in his hometown for nearly a quarter century, ever since he and his wife Joan, a pediatrician, left Raleigh and returned to Kinston to raise their children.

He gave up his job as a federal prosecutor because he wanted to try to make a difference in his hometown. And today, he represents the accused instead of trying the accused.

He’s 54, the father of five boys, all of them grown except Jackson, a ninth-grader at Parrott Academy in Kinston. He thinks of his boys every time he’s in the basement or on the third floor of the Lenoir County Courthouse. He’ll be sitting across from a young man charged with a crime and hear, “Mr. Jimbo, don’t you remember me?’’

He’s heard kids in southeast Kinston say their academic career ends after Rochelle — that’s Rochelle Middle School — and that they aspire to work at Big Z — that’s a supermarket near where they live. But for the past three years, with Little By Little, he’s tried to change that.

Jimbo takes his charges to visit college campuses. They stay in fancy hotels, see tourist attractions, watch productions in beautiful theaters, and eat in fine restaurants with cloth napkins on their laps.

Meanwhile, with the help of scholarships, these kids go to summer camps, from well-known North Carolina spots like Camp Sea Gull, to new places in Kinston such as The Refuge, or to the Perrys’ own farm.

The kids don’t know it as the Perry Farm. They know it by another name: Camp Duo, as in Do Unto Others, or the Fun Farm. Or even something else.

Jimbo loves fun. Two decades ago, he dressed as a pirate at his son Madison’s elementary school and encouraged Madison and his classmates to dig for buried treasure.

Last fall, Jimbo toted about 25 fifth graders to Greensboro and got them all a free show at Carolina Theatre, a one-night stay at the O.Henry Hotel, and a three-course breakfast in a swanky O.Henry conference room.

There, Jimbo talked about DYB as he walked around the room in a white tux, a pair of black patent leather shoes, and no socks.

Ask Jimbo about his burning need to help, and he’ll tell you his father’s frequent question around the dinner table,
“What have you done today to help someone around you?’’

Or he’ll simply pull out the red book The Greatest Thing in the World, by Henry Drummond. It’s small, the size of his palm, a gift from his lawyer grandfather. A fourth-generation attorney, Jimbo still reads it. There, on page 80, is the book’s theme. It’s the very last line: “Everyone that loveth is born of God.’’

“If they aren’t exposed to anything but survival,’’ Jimbo says, “it’s hard for them to dream about anything.’’

It’s past 10 p.m. at The Gate when Jimbo gives Rock a ride home after their talk around a chessboard. Jimbo drops Rock off around the corner from Big Z, in front of a forlorn place with a torn screen and a “No Trespassing’’ sign out front.

For now, that’s where Rock is staying. But before Rock gets out of Jimbo’s 1996 Nissan Maxima, his friend has a request.

“I want to see your science project so I can see if I can help you with it,’’ Jimbo says. Rock runs inside and brings out a slender packet of paper, along with his mom.