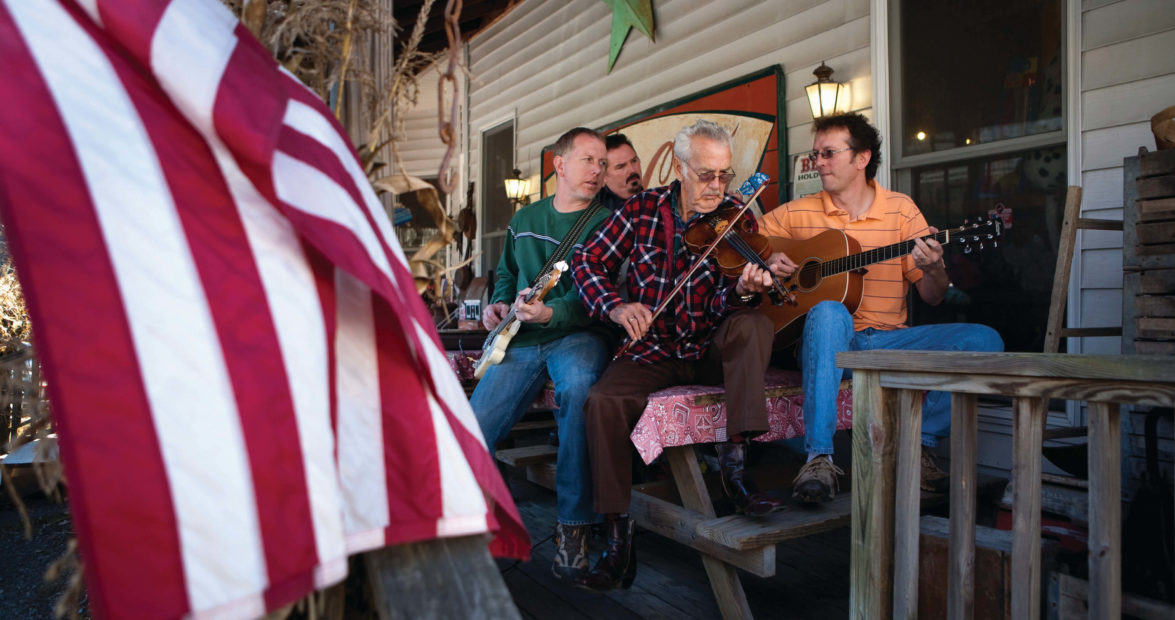 I ease up a wet mountain road headed to a VFW hall in Crossnore. I haven’t seen sunshine in almost a week, and I figure some good ol’ bluegrass music might brighten my day. There’s a family up here, the Johnsons, that I’d first heard about from some folks at a store in Linville. Three of them are up here today, at the VFW hall. I hear they’re good.

As I pull up, the three men are unloading their instruments from their cars in the parking lot. Although I haven’t met them before, I recognize them, based on the conversations I’ve had at the store.

I pick out Bruce, the father of the clan, immediately. He’s slim built, what my father would call “wiry.” He’s wearing blue jeans, black cowboy boots, a red-and-white checked shirt, and a black leather jacket. He has a little, pencil-thin mustache, his black and silver hair combed back on his head, and he’s smoking a cigarette. I like him before I ever meet him.

Kenny has red hair and is always smiling, exuberant and so immediately affable you’d think he’s running for office.

Alan is a little taller, thinner, not serious exactly, but more reserved. He has dark hair and wears glasses. My first impression is that these are “good ol’ boys,” the kind I grew up with and feel comfortable with.

Because it’s raining, we rush into the building.

Once inside, they release their instruments from the cases. Kenny brings out a white electric bass, Bruce a fiddle, and Alan an acoustic guitar and a fiddle. Bruce immediately begins to move the bow across the strings of his fiddle, but soon gives it to Alan to tune. “I’m getting a little old, and I can’t hear the music quite as sharp as I us’ta. Alan’s got a better ear but I can still play pretty good.” As soon as he gets the fiddle back in his hands, he begins to play a tune, at first tentatively, then more confidently. “He’s just practicing,” the boys kid, with an apparent appreciation for their father and his musical ability.

I can hear some voices coming from another part of the building, but in the big open room there are just the four of us. It’s the kind of place that reflects the community: spare but comfortable, the walls decorated with mementoes of former events and memorials to members passed, some tables and chairs ready for the next gathering, and banners and flags that are a part of every VFW hall. As we sit in one corner of the room, with Bruce’s music wrapping around us, there’s a feeling of camaraderie, a comfortable shared sense of appreciation for the God-given talents they all possess and of the place and people that have nourished them.

I walk over to look more closely at some of the memorabilia. Then I look back at the trio seated at the other end of the room. I’m reminded of a painting as the rainy-day illumination from the windows throws a pane-shaped spotlight on the group. They look isolated from their surroundings and at the same time seem a part of it all. I walk back up to sit with them on the informal stage.

Hear the Johnson Family in an Our State exclusive video.

Bruce Johnson and his sons, Kenny and Alan, join together to create a bluegrass escape in the mountains of Crossnore, N.C. Hear them play “Turkey in the Straw” on the front porch of the Old Hampton Store in Linville, N.C. Video produced for Our State by photographer Matt Rose. To view additional Our State videos, click here.
• • •

I ask Bruce what he’s playing. “It started out to be ‘The Great Speckled Bird,’ but it turned into ‘Wabash Cannonball,’ ” he says, laughing.

Alan leans over to me and says, “Don’t let him fool you. He can play that thing better than he lets on. He doesn’t get enough credit sometimes for how good he is.”

Without a word exchanged, the three begin playing “Faded Love,” an old tune made famous by Bob Wills and the Texas Playboys just after World War II. It catches me a little by surprise; the sound coming from the old fiddle is so pure and clear it sweeps me into the song. It catches the angst, the disappointment, the real sorrow of lost love. There is real and universal emotion here in the empty meeting room on the top of a mountain, emotion passed through the hands of a man who has lived life as it comes to him, even when his dreams sometimes faded away or remained just beyond his grasp.

When the song ends, Bruce recalls his early dream. “Listening to him (Bob Wills) and the rest of ’em on the radio is how I learned to play the fiddle. I had a little simple crystal set that I hooked up so I could listen to ‘The Grand Ole Opry’ on Saturday night back before the war. My dream was to play on that program, but I never did. It weren’t from lack of tryin’ though. My daddy taught me the basic notes when I was about 11 years old, and I spent every spare minute, and some not so spare, sawin’ on that fiddle until I got good.”

He got good enough to start playing in local fiddling contests. “It paid a little money — if you were good — and you didn’t have to travel too far,” he says. “But the competition would be fierce. Everybody up in these mountains can play music. Lots of ’em can play more than one instrument, too. Both these boys can play the fiddle and guitar. I started teaching them when they was little. Some folks do better than others. I got another son, Alex, that tried to play, but he decided hisself he didn’t have what it took so he just left it alone and went into the construction business. Just likes to hear us play. It’s got to be borned in you. It was borned in me and them.”

Riding the train
Although music is a family affair, according to Bruce, his wife Jean was not always supportive of his commitment to fiddle playing. “I’m 76 years old,” he says. “And I drove a truck for 47 years, so I was gone a lot. I took the fiddle with me on the truck. Naturally, fiddlin’ got a lot of attention, and she mighta saw it as competition but it weren’t. To tell you the truth, I sometimes thought she’d rather me take a fifth o’ liquor in that truck instead of my fiddle. Now, she liked the music. She liked to listen to it when we practiced at home.”

“Oh, no. But now her mother, my mother-in-law, could play a pretty good claw-hammer banjer.” (A claw-hammer style is when the instrumentalist strums or strikes the banjo strings all at once as opposed to picking. It’s not a style that lends itself to ballads or lullabies.)

Bruce then places his cigarette in an ashtray (he’s had one cancerous lung removed) and pulls the bow across the fiddle strings. A mournful sound like the horn of a freight train fills the room. It’s a wordless signal to the boys that it’s time for “The Orange Blossom Special.”

Al and Kenny keep the harmony and rhythm going as Bruce demonstrates how to play one of the greatest bluegrass tunes. He pulls the bow across the strings and the train horn sounds, plinks a string and the bell rings, and The Orange Blossom Special begins that fast-paced journey down the tracks of time and through the memories of four men sitting in an empty VFW hall in the mountains of North Carolina. The speed of the train slows, then rises as each player senses his role. But Bruce, looking over his glasses, is the engineer.

Then Alan picks up his fiddle and begins to play along with his father. Wordlessly, the leads change, keys change, then harmonies are added as the train speeds down the musical track. The instrumentalists look at each other for the imperceptible clue that a change is upcoming. All the while, their fingers spring up and down the necks of the twin fiddles like elegant, long-legged spiders on a hot fireplace poker. And when the trip comes to a close, I feel like I’ve taken the musical ride of a lifetime.

After watching such a virtuoso performance I ask Bruce why he never pursued a career as a professional musician. “Well, I did think about that,” he replies. “My goal was to play on ‘The Grand Ole Opry,’ but times was hard, and I had a family to support, and I put them first. My parents wanted to me to be a hardcore preacher but they got a fiddler instead. They were probably real disappointed.”

Bruce did play with some professional groups, traveling bands that would come through the mountain towns playing in school auditoriums. “I played with Bill Monroe, back before he was famous, and Chubby Wise and others when they’d be hurtin’ for a fiddler. But I enjoyed playin’ for the fun of it and winnin’ at festivals.”

Kenny breaks in and says with a laugh, “Daddy won’t tell you that Alan beat him in a fiddlin’ contest when Alan was just 13 years old.”

“ ’Bout near made me quit playin’,” Bruce chuckles. “But I was proud of him. After all, I taught him everything he knew!” And all three laugh.

Those early contests were, indeed, a training ground for Alan’s ascendancy to the professional music stage. Starting at Tweetsie in Boone then on to Dollywood, he eventually went to Nashville and played with such performers as Lorrie Morgan, Doyle Lawson, and others. But he also learned from his father that family comes first. When he got married, “Big Al” and his bride came back home to Newland. He now teaches music, plays every once in a while, and works at the post office over in Jonas Ridge.

Kenny also continues to play whenever he gets the chance, but his biggest ongoing connection with bluegrass is the High Country Bluegrass Festival he produces in Boone each July. Every year, some of the biggest names in bluegrass music come to the event. For Bruce, Alan, and Kenny, the music is their own.

When I leave the three family musicians in the parking lot of the VFW hall, the rain has stopped, and a heavy fog, maybe a cloud, has settled just above the pavement of the road going up the mountain. A tractor rolls home slowly ahead of me, the orange safety lights blinking as traffic backs up behind it. I’m listening to the music on the car radio. It’s a continuation of the same kind of music I’ve just left: fiddle, banjo, guitar.

As the traffic slows to a crawl, I roll the window down, let the music escape the car and fly like a mockingbird through the mountain mist. I imagine it was the offspring of the same music Bruce Johnson had heard so many years ago, now returning to the hills where it was “borned,” just like all the Johnson family.