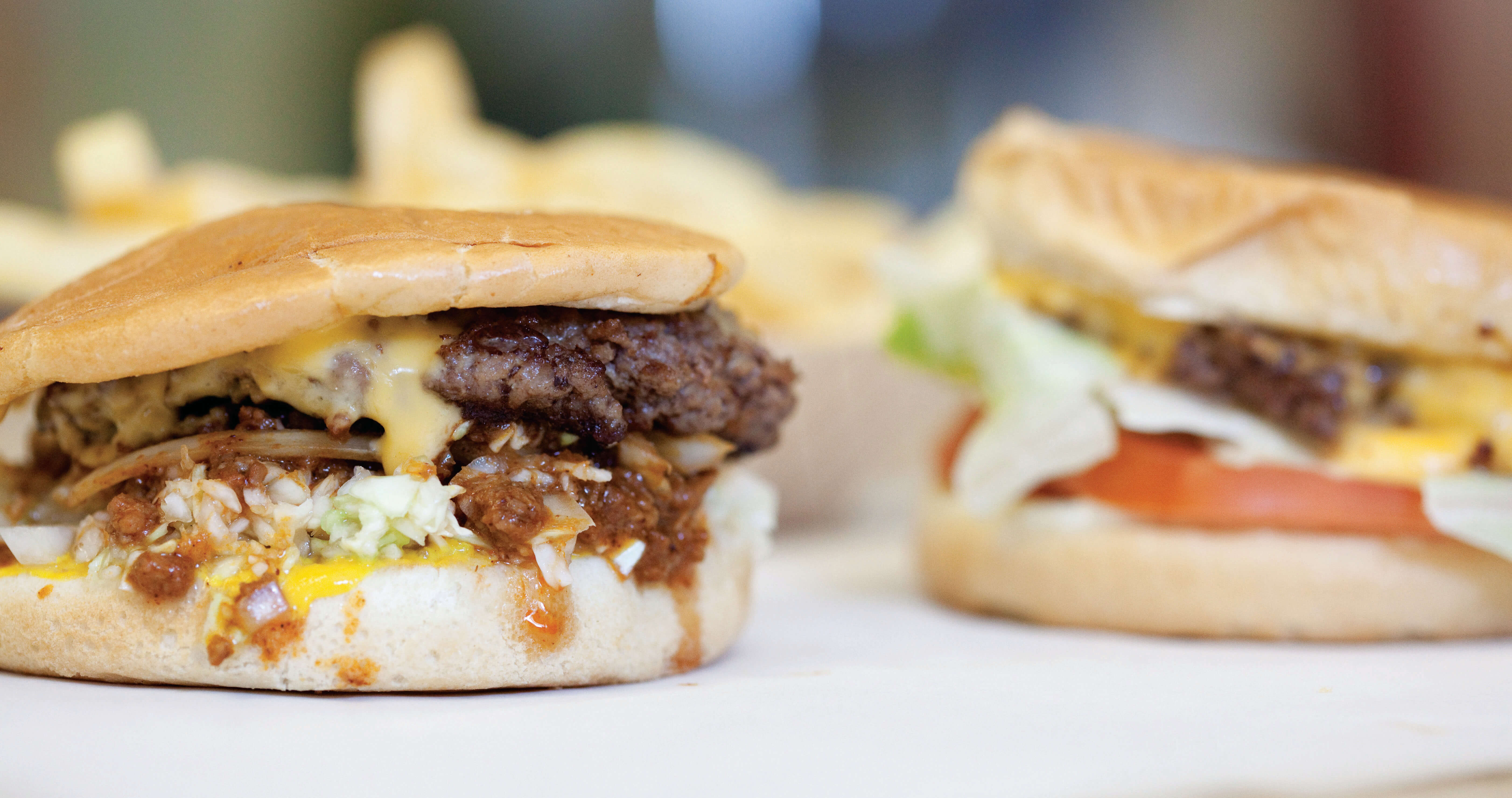 EDITOR’S NOTE: This story originally appeared in the June 2010 issue of Our State.

Claxton Johnson pulls into the parking lot of his burger joint shortly after sunrise to meet a delivery truck.

Inside the truck are massive sides of Western grain-fed, USDA-choice beef. Johnson inspects each like a museum curator. “The best quality beef is from cows that have been fed a lot of grain,” says Johnson. “You want to look for a nice marble in the meat. That’s where the flavor comes from.”

Johnson has the weathered look of an old tobacco farmer, his face creased by time and his gait slightly stooped from decades of standing at the griddle inside Johnson’s Drive-In in Siler City. Leaning in close to look for the telltale marbling, he shows why he is a culinary master known around the state.

Johnson selects his beef and has it hauled into the back room of his restaurant. There, he and his son-in-law, Daniel Routh, grind it, roll it into tennis-ball-size mounds, and pack it into tubs. One by one, the tubs are placed beside Johnson at the griddle, where he grabs several mounds at a time, drops them onto the hot, sizzling surface, and presses them into patties. He waits for the juices to bubble, then flips.

Johnson cuts thick slabs of cheese from a block of Velveeta, drops one on each patty, then tops each with a bun. When the cheese begins to melt into the meat, Johnson scoops them onto bun bottoms waiting in wax paper, ready to serve.

A man with a purpose

Johnson doesn’t cook all day in his restaurant. From opening at 10 a.m. until the lunch rush hits, around noon, he’ll let Daniel or his daughter, Carolyn Routh, handle the spatula. He works the room — so well sometimes, he’s been asked about getting into politics. Everyone in Siler City, after all, knows Johnson. But he always declines. That’s not who he is, he says. He uses the same explanation, in a more roundabout way, to answer the question he gets most: Why not expand the menu?

Johnson keeps his burger fixings simple. Customers can go all the way and enjoy burgers topped with Velveeta, slaw, mustard, onions, and chili. Or they can keep it simple, with just lettuce and tomato. Like the buns and meat, all of it is bought fresh that morning.

Nothing is used the next day. Johnson also serves hot dogs and grilled cheese sandwiches, but that’s about it. And that’s all there will ever be.

“See that road?” says Johnson, pointing at U.S. Highway 64 just beyond the restaurant’s front window. “That was just a gravel road when my daddy opened this restaurant. There was nothing else around here for 20 miles.”

“People said having all those restaurants around us should have put us out of business,” Johnson says, grinning. “It only increased our business. If you strive to put out a quality product, you don’t have to worry about competition.”

Johnson enjoys doing one thing — making cheeseburgers — extremely well. Many say no one does it better.

The handful of seats in Johnson’s Drive-In — 12 stools at the counter and a few booths — fill up long before noon. Word of the amazing burgers has traveled wide, and masses of North Carolinians for generations have made the trek to Siler City for Johnson’s cheeseburgers. By 11 a.m., hungry customers are lining the back wall, waiting to order and hoping a spot will open for them. When things are busy, Johnson is all business, tending the griddle, spatula in hand. He doesn’t say much, mostly because he’s so maniacal about his cheeseburgers. It drives him nuts when his customers don’t eat them hot.

On a recent afternoon, a friend stops in. Johnson slides into the booth for a chat then realizes he’s kept his friend from eating his burger. It has only been five minutes. “That burger’s not fit to eat now,” he says, snatching it up and handing it to Carolyn, who quickly prepares a replacement.

Freshness is also a reason Johnson has never installed a phone in his restaurant.

“Do you know what would happen if I listed the number?” he asks. “We’d have customers calling in their orders, and by the time they came in to pick it up, their burgers would be cold.”

Johnson is all about quality, which is why he likes things just the way they are.

Expand the restaurant? That would only mean more pressure to make his burgers faster, and quality would be at risk. Offer different kinds of cheese? Why, when none melts better than Velveeta? Johnson says his father once used a certain type of Borden cheese, but Borden discontinued it.

“My dad shopped around for a cheese that enhanced the flavor of the burger,” says Johnson. “We’ve been using Velveeta ever since, for 40 years.”

Perhaps the one question that people ask most often, however, is why Johnson doesn’t expand his hours. He has a steady stream of regulars who come in shortly after he opens to order a big cup of sweet tea, their coffee alternative.

“It’s really a sweet tea syrup,” jokes Carolyn. “True Southern tea should be sweet enough to substitute for pancake syrup if you need to.”

By 2 p.m., Johnson flips the last burger and tells Carolyn or Daniel to let the latecomers know they’re out of luck. Once the meat is gone, the restaurant closes. Carolyn says it breaks her heart to see all the disappointed faces. But the next day, she sees most of them again, this time well before noon.

If it ain’t broke

With the last few lucky customers finishing up their meals, Johnson begins to relax, once again the politician moving among his loyal following. A customer from Raleigh asks him why he doesn’t take advantage of his fame, which has now gone global thanks to the Internet.

Johnson rubs his forehead and takes a quick look around his place. The wood paneling on the walls, the green leatherette stools and booths, the old pushpin-style menu board above the griddle — none of it has changed over the years.

Johnson has yet to find a reason why any of it should.