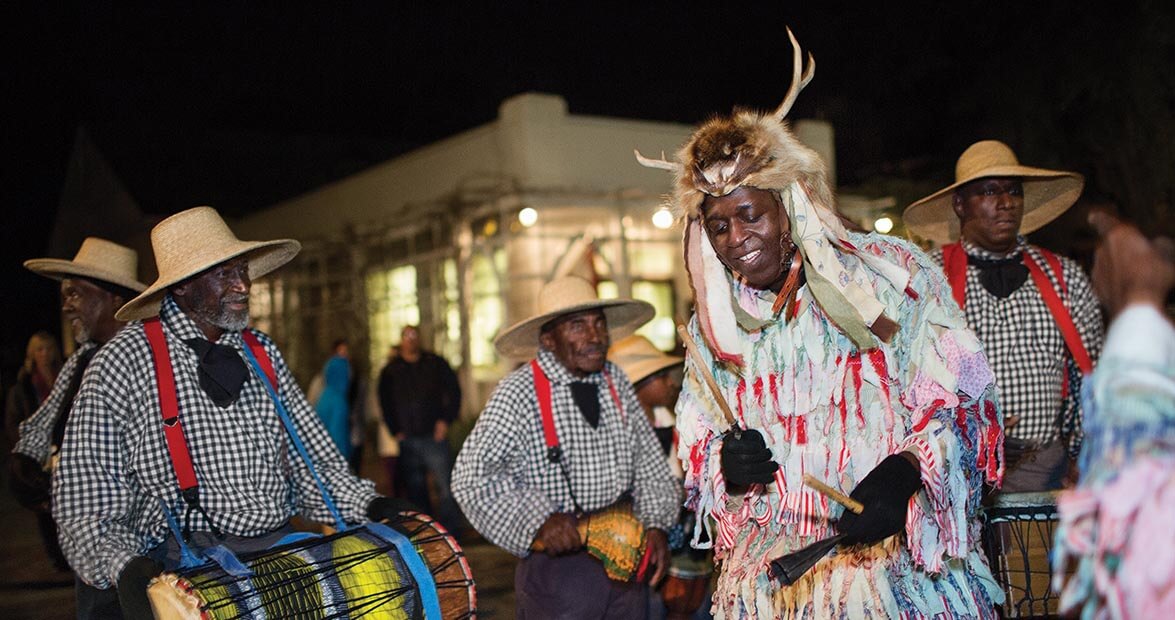 The trim old houses along George Street in New Bern are all dressed up for the holidays.

Christmas trees glimmer. Garlands cling to porch railings. Tryon Palace, behind that expansive lawn at the south end of the street, looks especially regal with electric candles and wreaths in the windows.

Christmas is a couple of weeks off yet, and the air on this Saturday night is crisp. A crowd gathers expectantly along the brick sidewalks, as if awaiting the fa-la-la-la-la of carolers. But then a woman’s voice makes a shrill call. She emerges from a house, yelling something that sounds like, “John Canoe is coming! John Canoe is coming!”

Before long, others stream out of the house: A man in a getup of rags from neck to toe and wide horns on his head. Another man, dapper in a dark suit, vest, and top hat. Men in straw hats, pounding on drums. Someone in a raccoon headdress. Women in raggedy dresses with white cloths on their heads, dancing. Little girls in bonnets keeping step, smiling. To the beat of the drums, they sing: Funga alafia, ashay ashay! Funga alafia, ashay ashay!

The West African chant roughly translates to, “I welcome you into my heart.” 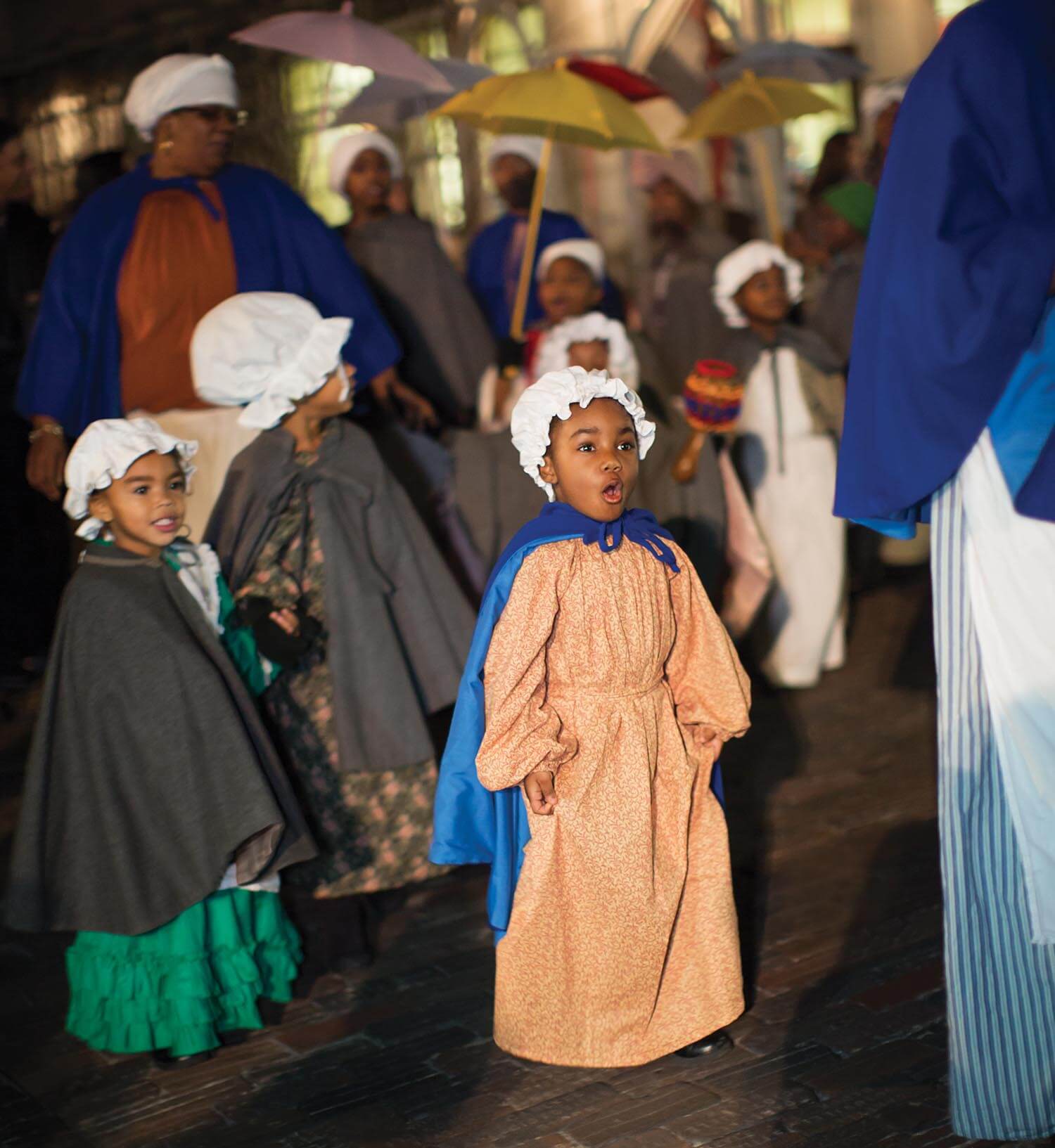 A year’s worth of celebrations

This festive scene plays out four times every December in New Bern for the celebration of Jonkonnu. (It’s pronounced like John Canoe, though the name’s origin is something of a mystery.) Twice each on the second and third Saturdays in December, during the palace’s candlelight celebration, African-American reenactors dance and sing, just as slaves in eastern North Carolina once did on the day after Christmas.

The man costumed in shreds of cloth — the ragman, he’s called — leads the procession after the shrill-voiced woman — she’s the town crier — runs through the crowd to announce the coming spectacle. Revelers go door to door with a big tin cup to collect coins. In plantation days, slaveholders were the ones giving the dancers money and other small gifts. This reenactment lasts 30 minutes or so, but the beat of the antebellum celebrations often would go on all day, with the ragman doing something that was totally taboo the other 364 days of the year: shaking hands with the slave master.

“[That] was a big thing itself,” says Keith McClease, Tryon Palace’s garden operations supervisor, who serves as the master drummer during the parade. “People came out just to see that.”

For slaves, of course, their daily existence was drudgery, but this singular day of the year, after the fall harvest and before the spring planting, they could let loose. What their bondage precluded them from celebrating the rest of the year — birthdays, marriages — they saved for this day. “Any celebration they could think of,” says Sharon C. Bryant, African-American outreach coordinator for Tryon Palace. “They didn’t celebrate it [as a singular holiday] like, ‘This is the Fourth of July.’”

Designating a day for slaves to sing, dance, and make merry might give the impression that slaveholders were charitable to their slaves. But Simon Spalding, a musician and historian in New Bern, suggests it was more of a “safety valve” for plantation owners to let their servants blow off steam. He dismisses notions that planters used the day to justify the institution of slavery.

Nevertheless, he says, “the idea of charity on the day after Christmas was a well-established English tradition.”

Spalding started the drumbeat for a regular reenactment of Jonkonnu in New Bern. In the late ’90s, he was working full-time at Tryon Palace, the first permanent state capitol and governor’s house for the colony. “I was looking for ways to develop more of an interpretation of the African-American history of Tryon Palace,” he says. “I was aware of some of the Jamaican musical traditions, which probably contributed to the Jonkonnu celebrations here in North Carolina.”

Those celebrations, he says, began in the state in the early 1800s, and were likely started by slaves brought from Jamaica. And those celebrations mostly stayed in North Carolina. Spalding says there are no accounts that Jonkonnu took place elsewhere in the South, save for one celebration just north of the state line in Virginia. Why? “Good question,” he says. It’s also unknown whether the festivals ever occurred in New Bern itself. Much of Spalding’s knowledge about what the ritual looked like comes from an 1829 description written by a slaveholder at Somerset Plantation in Washington County. Hillsborough and Wilmington were two other places known to host Jonkonnu festivals.

“I believe what you see in Jonkonnu is a melding of several different West African festival traditions with English traditions,” Spalding says. “The fusion of these different traditions occurred in Jamaica.” Jonkonnu spread to other Caribbean locales, such as the Bahamas and Belize.

The slaves made their costumes with whatever they could scrounge up: tablecloths, sleeping gowns, rags. Records show slave masters, too, often bought regalia for Jonkonnu parties. The crowd roved from house to house in the community, clapping and cavorting and carrying on. “Sometimes, you wouldn’t even know who was living in the next plantation until this event came about,” Bryant says. Unbeknownst to white listeners, some of the songs ribbed and mocked the slave masters.

Jonkonnu festivals faded in North Carolina by the end of the 19th century, with Jim Crow laws discouraging African-Americans from throwing boisterous parties in the street. But now, on two Saturday nights in December, the sounds of shouting, drumming, and clapping burst onto the street like a ragtag dance troupe. There they go, to the middle of Pollock Street, to the wrought-iron fence of Tryon Palace, past spectators smiling and clapping. Some don’t just spectate; they join in.

Jonkonnu is a rare sound of joy born out of a sorrowful episode in American history. That unbridled joy, absent the sorrow, returns every Christmastime among the lovely old houses of George Street.