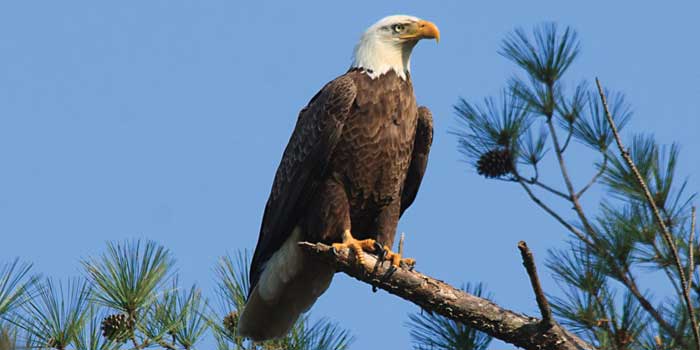 The bald eagle doesn’t sound much like it looks. Its wingspan is large — about 6 feet to 8 feet — but its call is so small that filmmakers portraying eagles used to dub in the sound of a screaming red-tailed hawk.

Standing in the eagle exhibit at Jordan Lake State Recreation Area, Ranger Steve McMurray plays his cell phone’s ringtone, which is programmed to make the same soft noises an eagle makes. It took him a few months to get used to it, he says jokingly, because he kept thinking he was hearing a real eagle.

At Jordan Lake, McMurray has a lot of opportunities to hear and see the real thing. The park is the site of the largest concentration of bald eagles on the East Coast. The birds are drawn here, McMurray says, because Jordan Lake’s more than 46,000 acres of water and surrounding woods provide plenty of food and room for them to nest high up in the pines, far away from human visitors.

It wasn’t always this way. The eagle population in North Carolina declined in the 20th century, and between 1973 and 1983, there were no active nests in the state. But federal protection laws and the creation of reservoirs like Jordan Lake helped the birds make a comeback here.

Now visitors to Jordan Lake can usually expect to see one or two, especially in the spring and summertime, when birds migrate north and the park’s eagle population triples. You have to know what you’re looking for, though. McMurray says the thing to remember is that eagles soar, their wings flat, as if stapled to a two-by-four. Any other raptor’s wings will take on a “V” shape in flight.

McMurray himself can spot an eagle when it’s just a speck in the sky, and he’s happy to share his knowledge with visitors. He regularly holds eagle talks at the park’s wildlife observation deck. He’ll bring his binoculars and spotting scope, and there, amid the cormorants and gulls, you’ll see it — flap, flap, soar — our national emblem.

Watch a live video feed of an eagle nest at Jordan Lake: ustream.tv/jordanlakeeagles.