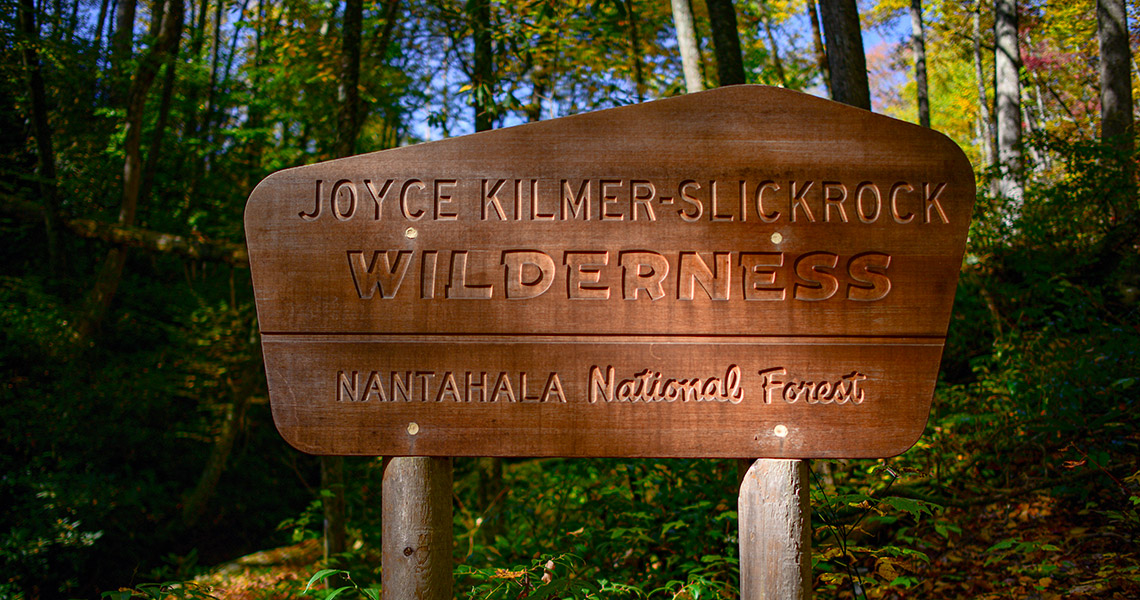 Editor’s Note: This story was originally published in 2011.

The two-lane blacktop leading from Robbinsville into the Joyce Kilmer Memorial Forest winds so far into Graham County’s green sea of hills that you may be first concerned, and then certain, that you are lost. Fifteen miles doesn’t seem like much until you’re ascending them in a vertiginous, ever-darkening coil. The farther you go, the denser the canopy becomes, until a woven shroud of poplar, walnut, cherry, and basswood almost closes over the road.

Green street signs — what few there are — begin appearing in both English and Cherokee, indicating that you’re close to the Snowbird Community, an outlying band of the Cherokee tribe, but these are the only real signs of human habitation.

To the west lies the dramatic slopes of the Unicoi Range. To the north, the Cheoahs dip and swell. Then the air darkens and cools, whistling along the banks of Little Santeetlah Creek like the forest itself is breathing. And then you aren’t lost at all, but wrapped up tight inside something lush and ancient.

The Kilmer is remarkable for one reason: It has been left alone. The axes of logging crews never chewed into these 3,800 acres of Great Smoky Mountains near the Tennessee border. Some sources say the falling prices of timber during the Great Depression saved the forest. The lumber company that originally owned the land pointed to the difficulty of floating logs out of an area so wild, steep, and generally inhospitable. Either way, Gennett Lumber sold this plot to the federal government in the 1920s, and by 1934, the United States Forest Service had dedicated the untouched vastness to the memory of American poet Joyce Kilmer, author of the famous poem “Trees.”

The Kilmer forest is one of the few old-growth forests remaining in the eastern United States. Here, leviathan 400-year-old poplars soar more than 100 feet into the sky, some with circumferences of 20 feet or more, most tucked into lacy banks of Christmas fern and trimmed with trillium and galax and heartleaf.

If the air hits you right in this wild place, sometimes it carries a hint of sweet birch, the smell of wintergreen. Waves of mountain laurel, doghobble, and rhododendron lap at the edges of the hardwoods, where they seem to absorb every sound but that of your boots on the hard-packed dirt. You might hear a faint chuffing or warbling somewhere off in the canopy, or the lilt of the Little Santeetlah down below, but mainly it’s just you. The sound of you.

The farther along you head up the two-mile main trail, the darker and greener your field of vision becomes; step off the trail, and you enter dense, disorienting vegetation, some of the thickest in the Southeast. All secondary trails are only lightly maintained, and signage is pretty much nonexistent. Smart visitors don’t venture into the depths of the Kilmer without a good topographic map and a compass. The ones who head in ill-equipped usually wish they hadn’t: more hikers have gotten lost in the Joyce Kilmer-Slickrock Wilderness than in any other place in North Carolina.

A century ago, the Kilmer was even more varied than it is now. Once, chestnuts nearly as large as the poplars towered over the forest floor. Around 1870, a man named John Denton moved to the Little Santeetlah from Tennessee, where he came upon a downed, hollowed-out chestnut that was so big he didn’t have to stoop his six-foot frame to step inside it. He carved out two rooms from that tree and lived in it for several months with his wife, Albertine, and his five children while he built a cabin nearby.

Sadly, chestnuts no longer cast shadows across the Kilmer. A fungus basically wiped them out by the middle of the 20th century. But the land changed and adapted and compensated for the loss the way it can do only if left to heal itself.

Even today, nothing in the forest is static or certain. The Kilmer currently wages war against the hemlock woolly adelgid, an aphid-like Asian insect that has been killing off the Eastern hemlock throughout Appalachia in staggering numbers. Several fallen hemlocks line the lower trail, their trunks gray like corpses, a sight that is as hard to look at as it is to turn away from. One can only imagine how these woods will change in the next 50 years as a result of this invasion, but for now, they’re green and filled with life, waiting to be explored.

To be able to listen for your footsteps and actually hear them, to be able to walk among trees that existed before Columbus descended on the New World — it’s a shame more experiences like this don’t exist.

“The paucity of such places is a measure of something lacking in man,” naturalist Christopher Camuto wrote of the Kilmer. “The rarity of old growth is unnatural.”

Biologists revere old-growth coves as ecological time capsules, which they undoubtedly are. But really the Kilmer is just a forest as a forest should be, as all forests would be — thick, wild, dynamic, mysterious — if left undisturbed. A mature forest in which there is an almost otherworldly elegance — a wisdom, even — to the light. The rounded leaves of basswoods and hickory filter and play with light instead of splintering it, the way pine does in the Piedmont, or choking it, the way cypress does in the swamp. When the sun shivers along the Kilmer’s floor, beaming down through the poplars, it doesn’t seem strange at all that generations of naturalists have likened these woods to a place of worship.

Ila Hatter refers to the Kilmer as the cathedral. She and her husband lived in the adjacent Snowbird Community for 16 years when Hatter worked in the forest as a greeter for the U.S. Forest Service. She briefed visitors on local history and shared what she knew about the native culture.

Ever since her Texan parents first educated her in basic survival, Hatter has spent most of her 69 years in the woods studying plants and their uses, especially their roles in the traditional Cherokee pharmacopoeia. She’s an expert in edible and medicinal plants.

“I’ve always wanted to know what was around me,” she says on her front porch in Bryson City, where hummingbirds swarm around feeders at dusk. “When I was flying all around the world as a flight attendant, I’d always stop in local libraries to learn about what was growing nearby. I was just obsessed with it, really. And if you’re into plants, you really can’t do better than living up here.”

For Hatter, the Kilmer is not an indecipherable scrawl of trunk and vine but a place where the flora forms its own kind of map. You’re likely to find yellow lady’s slipper on north-facing slopes, for example, and yellowroot, that staple of Appalachian homeopathy, will sprout along the riverbanks. Cranefly orchids prefer the rhododendron thickets, while wild ginger likes moist soil near water.

If you know anything about your environment, Hatter says, you’re never really lost. Knowledge of the woods around them is the map that the Cherokee lived by for hundreds of years. No one will ever know these forests more intimately than they.

“Today, plenty of Cherokee know about the biological benefits of traditional medicine,” Hatter says, “but very few still practice the mystical part, which is such a shame. The older generation is dying, and lots of the kids aren’t as interested in this stuff. In old Cherokee culture, you needed both the knowledge of the plant and the connection to the spirit world for medicine to work. They really couldn’t be separated.”

It is in old-growth forests like the Kilmer, Hatter says, where the Cherokee feel the connection between medicine and magic is strongest.

Cherokee legends frequently include the yumwi, or little people, who inhabit the oldest trees. Like elves or gnomes in European fairy tales, the yumwi are said to exercise mischief on just about everyone — except the very young and the very old, whom they protect and care for. When a lost child finds his way back home, legends tell us it is the yumwi who led him out of the dark woods.

Take an ax to the trees, however, and the yumwi disappear with them. The yumwi, like us, need the forest to survive.