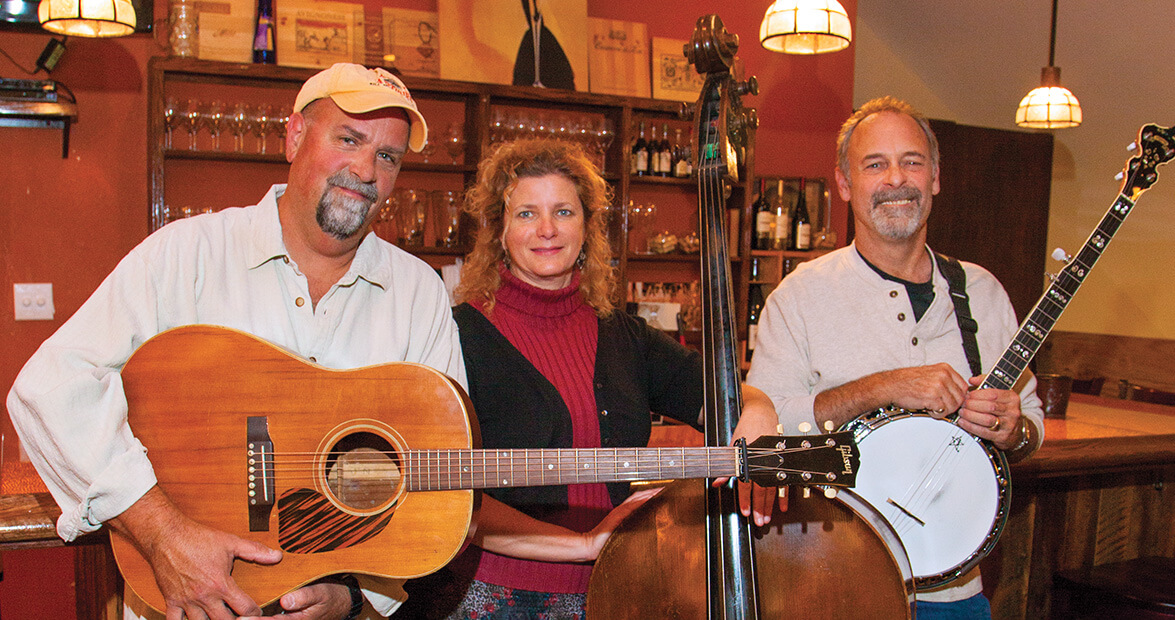 It’s a Friday night at Trio in Kitty Hawk, and the chatter is high among the people sipping Syrah and Belgian-style brews.

But then, from the back corner of the bar, the band hits its first licks, fast and furious, on mandolin, banjos, and upright bass. The chatter stops and all heads turn to watch the Jug Tucker Band, which are Mark and Sherri Criminger and Ed Gee with their special guest, banjo master Jon Cornatzer. The bar patrons set down their glasses, adding handclaps to the bluegrass instrumental.

Jug Tucker clearly belongs in this upscale, wine-and-cheese setting, but it’s easy to see by their relaxed style and musical sensibilities that they’d be equally at home at a roadside dive, on somebody’s back porch, or around a campfire.

They’d fit in just about anywhere across North Carolina, yet the band is rooted on the Outer Banks. The musical trio plays 99 percent of its gigs in bars and on restaurant decks in the beach towns between Corolla and Ocracoke.

But when the band’s songwriter, Mark Criminger, wanted to finish writing their latest album, he headed west to the mountains to do a little “wood-shedding” along the French Broad River. While his wife, Sherri, who plays upright bass in the band, worked as a nurse in Asheville, Criminger hunkered down in a vintage Shasta camp trailer with his guitar, writing enough material to complete the band’s first all-original album, which will be released in the spring.

“It’s hard to do any songwriting when we’re home,” Criminger says. “On the Outer Banks we’re so busy.”

“This is music that doesn’t get heard very often,” Harper says. “I don’t know where they dig up some of this stuff.”

Jug Tucker is known for kicking off in a frenzy and not letting up until everyone is on their feet dancing. The band’s set lists often include upbeat covers of Bill Monroe and Benny Goodman, songs that showcase their accomplished picking, instrumentation, and three-part vocal harmonies. Criminger likes to interact with the audience with a little banter or a name-that-song contest.

Outer Banks visitors who catch Jug Tucker by chance are often surprised by what they hear — definitely not the acoustic Jimmy Buffett covers one expects at a beach bar. Not many musicians on the Outer Banks are playing this music, and the Bankers love it.

“We are fortunate enough to be able to work in our own backyard,” Criminger says. “We don’t have to tour. We have a following and we’re growing.”

Criminger, who’s played guitar, mandolin, and bass for more than 30 years, has performed professionally from coast to coast and has shared the stage with the likes of Doc Watson, Ralph Stanley, and Art Stamper.

He taught Sherri to play upright bass after she said that what he did for a living looked liked fun.

“She took right to it,” Criminger says. “I taught her how to play the bass and now I have to pay her.”

Like most Outer Banks-based musicians, the band’s summer workload is challenging, with sweltering outdoor gigs and multiple setups and breakdowns a week. But you won’t hear the Crimingers or Gee complaining about playing music. They love this life, and they love the material.

“Our motivation is the music,” Criminger says. “We’re so inspired by the music.”

Jug Tucker Live was recorded in the summer of 2012 at Pamlico Jack’s Restaurant in Nags Head. It has three original songs and covers of traditional bluegrass tunes and swing favorites. Purchase a copy at the band’s website, jugtucker.com.

To see a list of Jug Tucker’s upcoming shows at Trio, visit obxtrio.com.