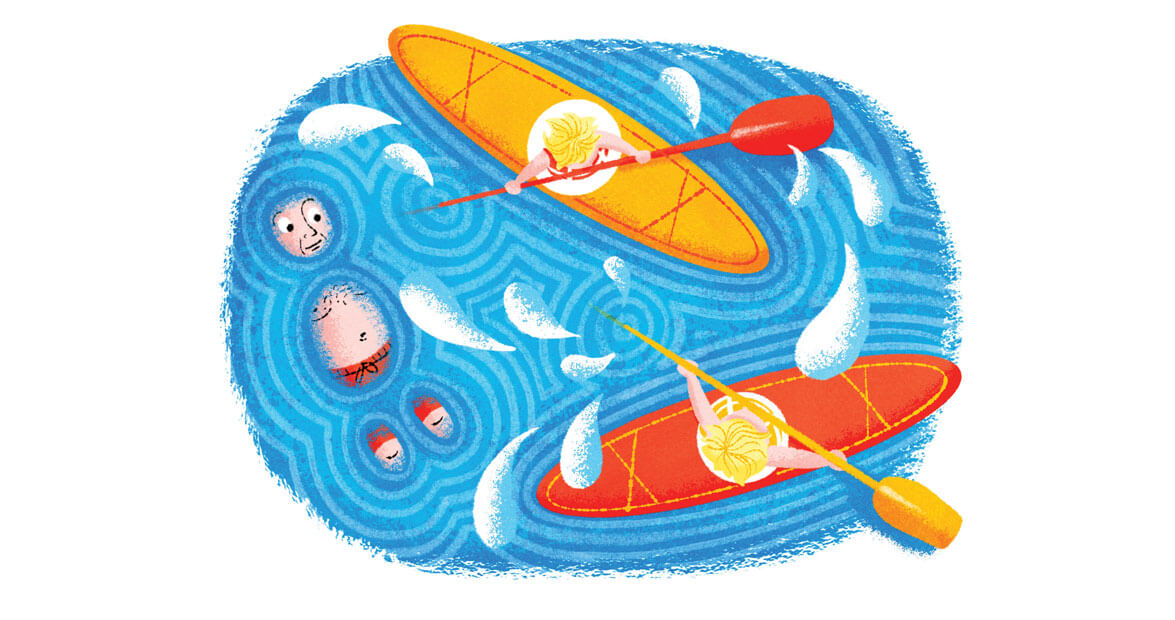 The Wee, summering over into first grade, wants to do it, too — and by “it,” I mean everything his brother does. Everything. As such, this was the summer wherein he opened the proceedings with a broken arm, courtesy of an attempt to do what his 9-year-old brother was doing, which was (completely unsanctioned) belly-flopping off the stairs onto the sofa cushions. The Wee fell, instead, breaking both bones in his right forearm. He healed in 10 minutes, because 6-year-olds are made of Silly Putty, but still. You have to be careful, we told him. You have to pay attention. You can do things that can seriously injure you inside the house, too.

Which is all to say: It’s not without some measure of trepidation that my wife and I are watching him paddle away, solo, in a kayak, trailing his brother out onto Lake Toxaway. Yes, he’s wearing a life vest. Yes, it’s a calm day. Yes, The Toad seems to know his way around a paddle well enough to circle back and straighten out The Wee when need be. And yet. There’s a good deal of whispered conversation between Tita and me there on the dock: You could swim out that far? You’re sure? You could get to them in time?

The boys are in the only two kayaks, or funyaks, or whatever these plastic not-canoes are called. It’d be a swim if anything went wrong. I earned a swimming merit badge at Boy Scout camp. I swim laps semi-regularly. Vague conditioning plus distant experience plus endorphins probably means that yes, I could get out there pretty quickly. We have to let them do things like this, we agree. All the same, though, I stand up, give the boys complicated airport-tarmac-like hand signals that clearly mean, in my own head, That’s far enough.

They don’t come back. They drift. They paddle and splash. The sound of both of them laughing comes skipping across the water.

The lake wasn’t part of the plan at all, but we catch lucky breaks like this from time to time. We turn up somewhere with these kids and all their curly hair and all our endless junk spilling from the doors of the minivan, and people take — well, pity’s not the right word, but I think we cut a sympathetic swath. Maybe folks remember having two little ones, even if ours aren’t so little these days. Maybe people know what it’s like to have two boys, two supernovas with only two settings: on and asleep. Anyhow, we’re out here because the owner of the mountain cabin we’re renting — sneaking a quick last vacation before school starts back up — told us that we could make an afternoon’s use of his lake house, too. There’s a key underneath a flowerpot, he said. Please. Take the boys up there. They’ll love it.

“House” turns out to be an insufficient word: The place is ready-made for a magazine wedding, all white clapboard and wide-plank floors and hanging ferns and porches wrapping all the way around. Don’t touch anything, we tell the boys, but for once, we don’t need to: They’re already out on the sprawling back lawn because it’s the kayaks they want, and soon enough it’s the kayaks they’re in, and I’m thinking about our strange fortune as I breaststroke out toward them, trying to affect the pose and pace of a dad who’s not worried in the least. I’m just somebody interested in cooling off a bit. Just somebody coming to say hello, to make sure all’s well.

All is well. The Wee’s a little winded, though, and he accepts my offer of a tow back toward the dock. His brother paddles out ahead. Later that night, we’ll be back in the cabin, out on the screened porch in a cool evening, the cicadas crashing all around — but for now, we’re just out here, one last taste of a summer just dangerous enough. A summer where we kept getting lucky, kept being in most of the right places at most of the right times, a summer where we — once again — tried to swim out to meet them without letting them know that’s what we were doing.