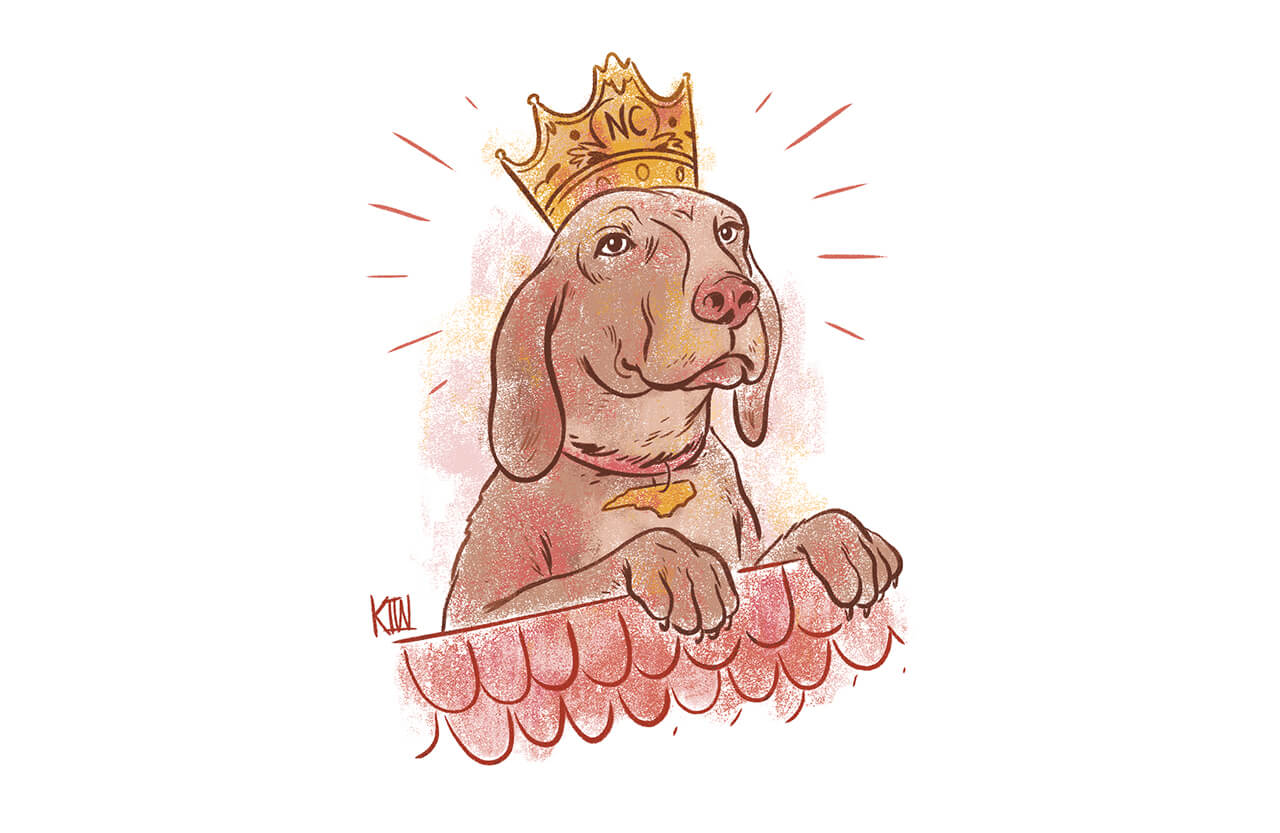 To tell the story of the Plott hound, it makes sense to find a Plott.

So here’s Bob Plott, one of the last family members breeding the official North Carolina state dog. We’re outside one of the dog pens at his house southwest of Statesville. And here, sniffing my hand for introduction, is Junior.

His registered name is Plott’s Bud Junior, which is more grounded than those Westminster Kennel Club dogs that always have names like Tallulah’s Uppity Throckmorton Dazzler IV. Plott hounds show at Westminster’s annual Dog Show, and Junior is 1 year old and gorgeous, but he is still a hound dog, which means he has a fleck of slobber at the corner of his mouth and a nose that at some point will be aimed for your crotch.

(Bud, another of Bob’s hounds, likes to bury chunks of ice in the wintertime. But he doesn’t quite get the concept of melting. So he’s furious when he digs the ice back up and it’s gone. WHO STOLE MY ICE?!?)

Bob is also a writer, and the binders on his kitchen table trace both Junior’s bloodlines and the Plott family history. Johannes and Enoch Plott, the teenage sons of a gamekeeper, left Germany in 1750 for an America that had not even been invented yet. Enoch died on the voyage. Johannes arrived alone except for the five dogs his family had sent with him. The dogs had been bred to hunt bear and wild boar. These things were abundant in the new land.

Johannes (who changed his name to George at some point) eventually settled in what is now Lincoln County. The dogs multiplied. Henry, one of George’s sons, took some of the pack to what is now Haywood County, near Waynesville. Where he lived became Plott Valley, next to Plott Creek, overlooked by the mountains called the Plott Balsams. Families on the frontier didn’t have dogs as playthings. They needed tough animals who would protect the family and help them track down food. As a later George Plott said in the 1960s, “This breed of dog won’t quit, he may get clawed and chewed, but he will be back next week. It is one with plenty of gut.”

Plott hounds became nationally known in the early 20th century, when outdoor writers started telling tales of the great hunting dog of the North Carolina mountains. Branch Rickey — the baseball executive who signed Jackie Robinson and integrated Major League Baseball — came down for a bear hunt with Plott family members in 1935. The United Kennel Club recognized the breed in 1946. After some lobbying from Plott descendants, North Carolina named it the state dog in 1989. Now, there’s a National Plott Hound Association and a Plott Days weekend for owners and breeders. Larry the Cable Guy came down a couple years ago to do a show on Plott hounds for the History Channel series Only in America.

Some Plott hounds still help hunters looking for big game. Others herd cattle and goats. They protect their people. “I come from the generation where you got spanked,” Bob says. “My dad would have to put the dogs out before he disciplined me, because the dogs weren’t gonna have it.”

Plott owns nine hounds now, and five of them are home when we go out to visit. They bay like a doo-wop group tuning up. Junior wags and jumps up on the fence to say hi. But when Bob opens the gate to the pen and I start to step inside, Junior stares me down until he’s sure everything is OK. The protector gene has kicked in.

Most Plott hounds have brindle coats, and Junior has the classic look, with brown streaks under a black base coat. Plotts get up to 60 to 75 pounds, but they aren’t loose-skinned like bloodhounds. Their ears are rounded, but shorter, and their bodies are taut like a Lab’s. At one point, Junior props his front paws on top of his doghouse, a king looking over all he surveys, and you can see how people became so attached to them over these two and a half centuries.

Bob Plott gives talks around the state on Plott hounds as part of the Road Scholars program of the North Carolina Humanities Council. He’ll ask schoolkids to stand up if any of them are named Plott. Then he’ll call out a bunch of other family names — families who became part of the extended clan of Plott owners and breeders. By the time he’s done, he says, most of the room is standing. “Just about any family that’s been here awhile, they have some connection to the Plott hound,” he says. “You can tell the history of the state through the history of these dogs.”

They also like it when you scratch their ears. Good dog, Junior. Good dog.