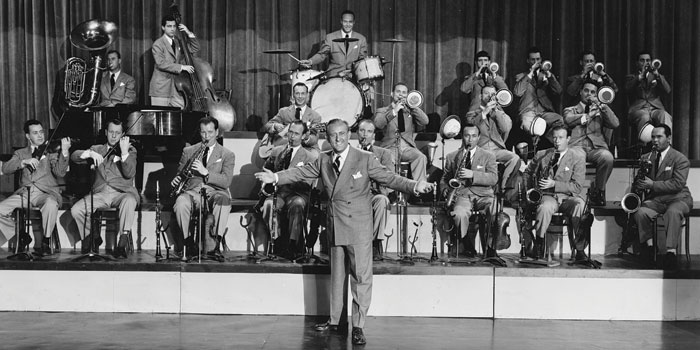 In its day, Kay Kyser’s band scored 35 top-10 hits, blazed across stages in Hollywood and New York, hobnobbed with the likes of Bette Davis and Lucille Ball, and placed the country boy from Rocky Mount among the most famous faces of swing-time jazz.

They called him The Ol’ Professor, and he led his big band from underneath a mortarboard and tassel, tapdancing in a knee-length academic robe, cutting up with a cornet player named Ish Kabibble, and spurring on his audience with a drawl-soaked catchphrase, “C’mon, chillun. Le’s dance!”

Through the Depression and World War II, Kyser offered zaniness as a cure for adversity, corny jokes as a balm for hard times, and cheek-to-cheek dancing as the only sensible activity. He couldn’t read a note of music or play one pretty tune on a clarinet, but he could calm the world’s nerves.

“Now we’re gonna have a little syncopation,” he would tell a packed house. “So I want you to toddle out here and truck around the totem pole and sashay around the stage. What I mean is, C’mon, chillun. Le’s dance!”

Born to pharmacist parents, James K. Kyser entered the University of North Carolina at Chapel Hill thinking he’d be a lawyer. But his antics as a Tar Heel cheerleader and his tendency to tool around campus in a Model T Ford with “Passion” painted on it helped him inherit the leader’s job with the campus band.

Real success took years before he found his niche with “The Kollege of Musical Knowledge” radio show, then as a film star. But he found it, along with a model-beautiful wife.

“At first, I was not so sure,” Kyser’s widow, Georgia, told The News & Observer of Raleigh in 1997. “He was a good deal older and wore glasses. But he was a very dynamic person, and he was better looking than he seemed to be in the pictures.”

You couldn’t beat the combination of manic, swing-driven energy and plain-folks fun.

With Kyser only 27 years gone, buried at his alma mater in Chapel Hill, his story is nearly forgotten, confined mostly to black-and-white photographs. His name didn’t make it as long as Glenn Miller’s or Benny Goodman’s. But it was just as big back then.

The reason, the thinking goes, is that the Carolina swingman vanished from the scene in the early 1950s, retiring to Chapel Hill with his family and avoiding the big-band nostalgia.

He’d performed for thousands of World War II soldiers, feeling guilty that so many were marching off to their deaths while he was making big money. Later, television chased the crowds out of concert halls. So Kyser packed it up and quietly pursued his Christian Science faith.

You can still see his picture in The Carolina Inn. He ranks among the names enshrined in the N.C. Music Hall of Fame. But for the most part, you won’t find many people who know the words to “Three Little Fishies” who don’t also sport a head of white hair.

But Kyser’s message, if not his name, has endured: Put away the cogitation. Now it’s time for relaxation. C’mon, chillun. Le’s dance.

Josh Shaffer is an award-winning writer for The News & Observer in Raleigh. His most recent stories for Our State were “North Carolina’s Sweet Potato Queen” and “Southern on Purpose” (November 2012).