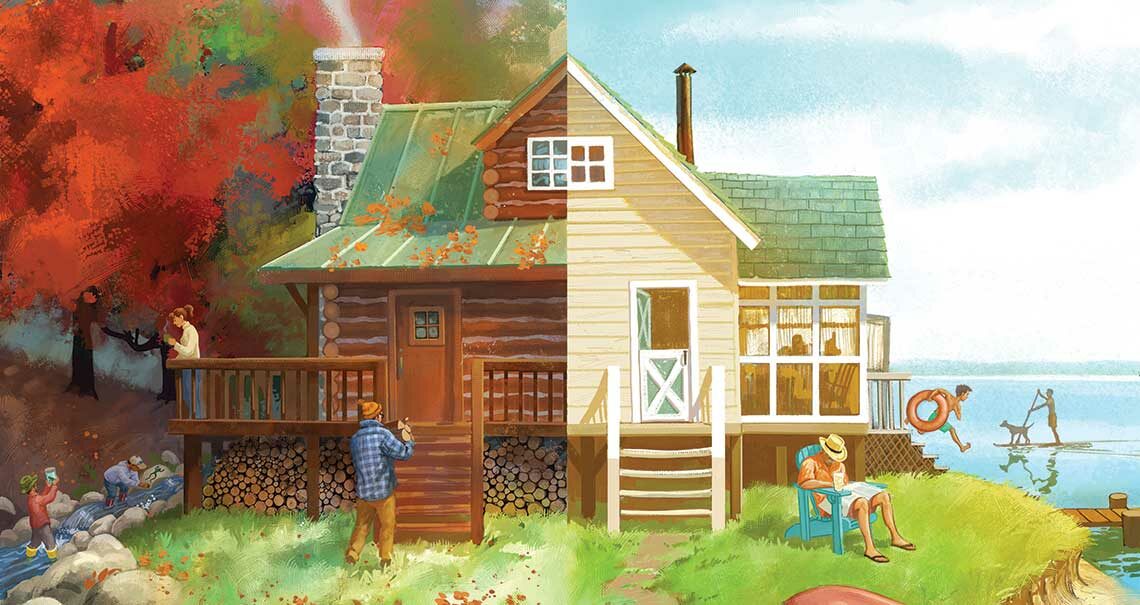 Would you rather keep cozy in a mountain cabin or kick back in a coastal cottage?

The Case for Cabins

After a cool-weather hike, there’s no place this writer would rather be than parked in front of the fireplace inside a cabin — log-style, please. In Cashiers, he found the hearth of his dreams.

I do not require actual notched and stacked logs, though I will, of course, accept and even encourage them. Dovetailed corner joints, after all, look like a million dollars from the gravel driveway. I need a gravel driveway. Asphalt or concrete driveways aren’t deal-breakers, and they’re friendlier on the minivan, even, but if we don’t have the sound of gravel under the tires, and we also don’t have logs — well, then, we’re off on the wrong foot, or feet, aren’t we?

I’m not big on the pillows/painted boards/ framed prints that say Relax or Cabin Time or Everything’s ________ in the Mountains. That feels more like a cabin knockoff of a beach house vibe. I will accept a Deer Crossing sign hanging on the downstairs bathroom door, so long as we understand that we’re headed toward a certain brand of comedy there, one that’s difficult to maintain throughout. I love an exposed beam. I want a loft. I require a porch or deck of some sort, and I treat almost as catechism that it needs to overlook … something. A cabin is as much about the outdoor space as the indoor. One does not, even in the most inclement weather, drink one’s cabin coffee inside — at least not the first cup. Perhaps this is the First Great Departure in the matter of Cabin vs. Cottage: I bet cottagers drink coffee in a breakfast nook. I bet there’s a small round table with a vase of wildflowers and great morning light. This is all well and good. For me and my kind, though, I want sleet and a hat and a chipped mug from a half-broken cabinet, and I want to look down a hill, and I want there to be fog.

Bonus points for a metal roof. Bonus points for part of the porch/deck being covered (see: sleet). The flatware better not match. The wine opener needs to be broken, thus requiring ingenuity. I want big heavy throw blankets on the sofas, plus a recliner that I would never, under any circumstances, have in my own house. Wood floors are a must. It’s nice if I never totally understand the floor plan. My kids prefer bunk beds.

The stone fireplace in Traphill was magnificent, and the ancient potbelly in Helton was an actual monument to efficiency, but nothing — not one fireplace in this state — can touch the yawning brick hearth in the cabin we rented down U.S. Highway 64 from Cashiers. We rented it for the fireplace, in fact, which almost, on its own, made up for the carpets in the back bedrooms, the too-low ceilings, the weird half-kitchen. Got up, lit a fire. Came back from hiking, lit a fire. Home in the evenings, lit a big fire, banked the coals before bedtime.

I can imagine water at a cottage, but when I do, it’s more of a pond-type situation. This cabin had a creek running alongside it, one you could hear from the porch — a porch that, in a stroke of absolute genius, opened onto a deck. Though it was frigid when we were there, the boys pulled on galoshes morning and evening to go hiking in the creek. I’d wander out to the porch-deck, lean over the railing, call down to them: Y’all aren’t cold? My big one would call back up: You have the fire going, right? 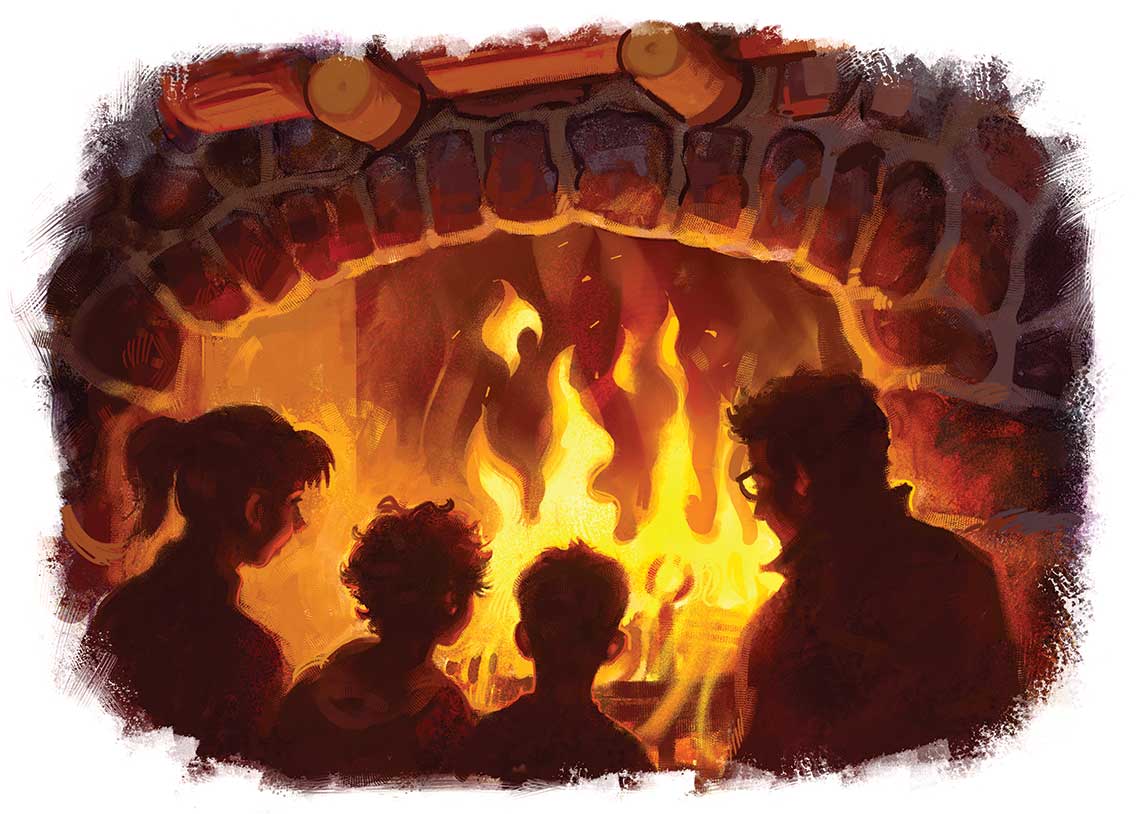 I did. We always did. The last night we were there, we made use of the outdoor fireplace, too, a fireplace that shared a chimney with the indoor fireplace. We grilled burgers and chicken and drank hot chocolate next to the bonfire we lit in the fire ring — any self-respecting cabin needs an outdoor firepit, too — and there, under the trees and stars, at least one of us wondered about these stolen cabin nights and weekends, wondered if the cottage folks had it quite so good.

And they do, the cottage folks — they have it just fine. They’re playing card games while a breeze ruffles the linen curtains. I can see them with ice in a Mason jar, matching white plates. Up here in the woods, though, we cabin people are jiggling the range knob just so, the way you have to so the thing will come on. We might have soup going. We’ll step out to the porch with a beverage in a state park mug, and we’ll check to make sure the boys aren’t getting frostbite down in the creek. After a while, though, we’ll need to go back inside: That fire’s not going to tend itself.

At a cottage, the living’s easy, and mostly outdoors. Three seasons out of the year, you’ll find this writer at her family’s nearly century-old abode on Lake Waccamaw — preferably on the porch.

We’re comparing here, not competing. This isn’t a versus; it’s a preference. It’s apples and oranges, not a contest.

Still. Casting my vote for a cottage.

Immediate plus point: A cottage (unlike a cabin) is nearly always on water. Mine’s on Lake Waccamaw, with a view of wide water and, five miles across, a three-inch line of treed horizon. I love a seaside shingled cottage, but old lake cottages — and this one is 90 — are clapboard. Clapboard outside, clapboard inside. No insulation. No paneling. No closets for that matter, at least in the bedrooms, where nails hammered into same clapboard suffice for shorts and T-shirt storage because, in a cottage, necessity is the mother of invention. Two of the five bedrooms stretch from front to back; with room for multiple beds, they’re basically dormitories. Girls upstairs. Boys downstairs.

Concede “cozy” to a cabin; a cottage has no room (literally) for intimacy. After all, you’re sharing a bathroom under the slanted roofline with nine others who also line their toothbrushes on a wall stud and duck their heads beneath a naked light bulb to brush their teeth. The bathtub is outside. It’s the lake.

Here’s a gimme win for a cabin: cottages are three-season places. You can manage a Thanksgiving spread, but there’s not much appeal to a cottage in January. Cottages do not have fireplaces. They have porches. People in cabins live inside. People in cottages live on porches. They eat on porches and play games on porches and doze in rockers on porches — not those Adirondack numbers at cabins that you can barely haul yourself out of without a crane — and watch lizards climb the bowed-out screens on porches. Cottage people only go back inside for something else to drink or eat, from a kitchen where the stove stands alone, unattached to a counter. A screen door is always slamming somewhere in a cottage because someone’s going back outside. 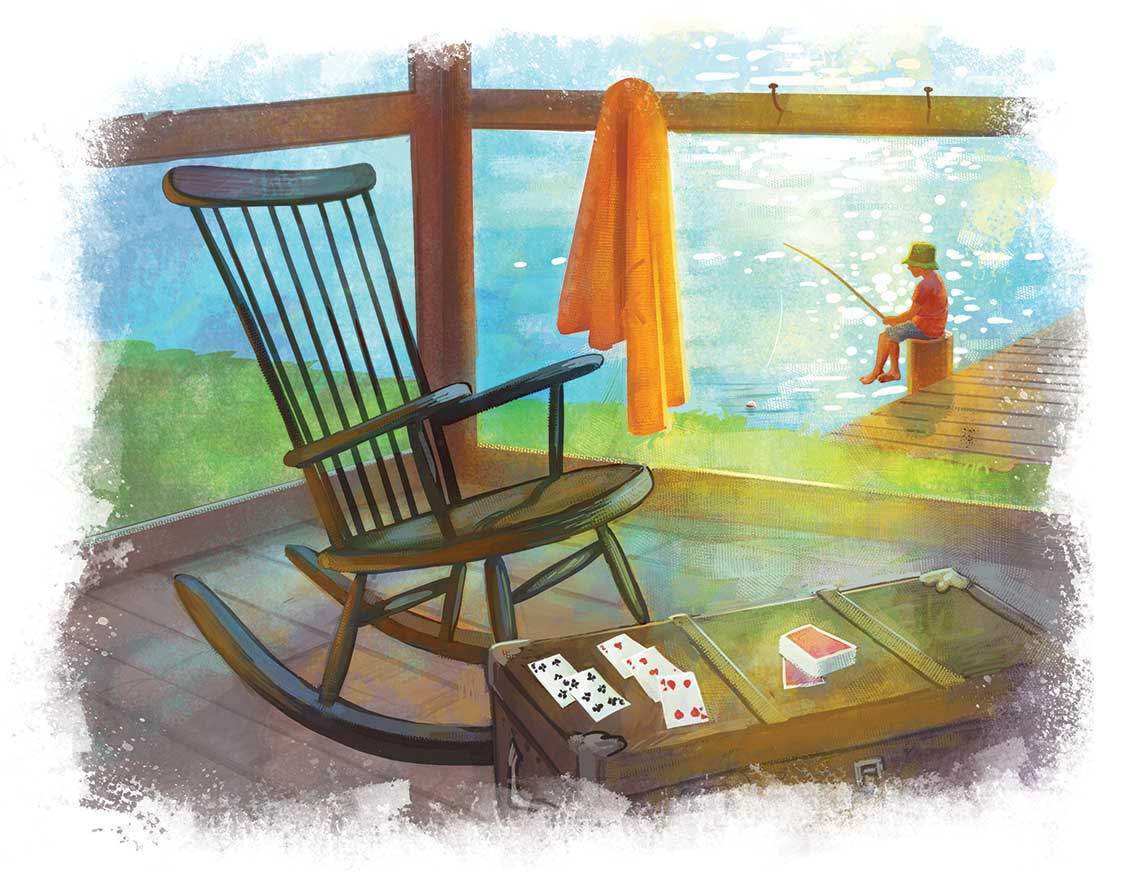 I give high marks to intentional inelegance, which abounds in cottages. Most of the decor is impervious to being ruined because it already is. Everything needs to be reupholstered or re-covered, and no one minds enough to do it. There’s homemade artwork tacked to the walls: someone’s imperfect rendering of a sunset, maybe a deflated balloon from a past birthday celebration. There’s a jar of screws and loose change next to an arrowhead and a hawk feather and a stack of curling Our States. There’s expired sunblock and insect repellent in a basket on the floor, and a can of Crisco, which never seems to expire, in a kitchen cabinet, and a pile of deflated rafts in the toolshed that no one quite has the energy to blow up and see if they still float. There’s always a wet towel slung somewhere. There may be geraniums or basil in a pot on a stoop that no one really remembers to water. Cottages may be careworn, and have a whiff of the tacky about them, but that very trait also makes them carefree. You can clean a cottage with a leaf blower.

Don’t forget that cottages have a concrete pad beneath or beside them, with a basketball goal and kickstand-ed bikes and a charcoal grill awaiting the next meal. Hard to bounce a ball or ride a bike on a forest floor. And grills in a forest? Dicey, if not downright illegal. Three more checks for the cottage column.

Cabins seem to recoil from civilization and request privacy, but, heck, a cottage is usually so close to its neighbor that you can see what they’re doing on their porch (or dock, or driveway), and without the pickups pulling boats and the occasional motorcycle blat-blatting by, there’d be nothing to talk about. You can imagine a hermit living peacefully alone — whittling, writing a memoir, tying flies — in a cabin, but without multiple people in them, cottages have no personality. They’re shells.

A cottage is open and guileless, boisterous and rambunctious. Cabins crouch next to streams or huddle under trees, but cottages sprawl, and not because of the interior layout (everyone’s outside) but because people are sprawled all over them in various states of undress and non-achieving activity. Nobody’s chopping wood or clearing the back forty at a cottage.

Getaway or vacay stay, cabins and cottages luckily fall into both categories. You could probably live permanently in a cabin, but in a cottage, nah. Which is why it’s such a joy to return to. You get a new lease on life but with the same old matchbook balancing the card table. Finally: fewer splinters when the walls aren’t hand-hewn. As I said, this isn’t a contest. It’s no contest whatsoever.