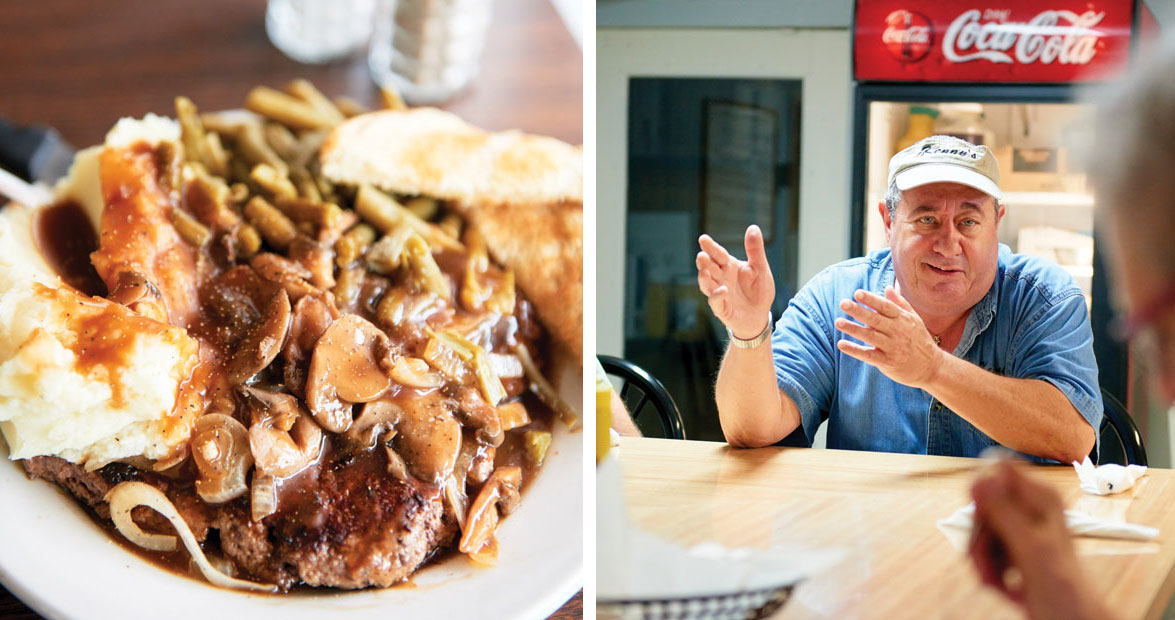 Up on the wall at Kenny’s Country Restaurant is a little shrine to Jim Valvano. There’s a print of a LeRoy Neiman-style painting of Valvano holding a basketball, another one of him looking more pensive, and a mini biography that includes his 1983 national championship as North Carolina State University’s basketball coach and his most famous quote, given days before his death: “Don’t give up. Don’t ever give up.”

“You know what I like about Valvano?” Ken Pompliano says, in between washing dishes. “Here’s a guy that was dying, and all he thought about was other people.” He shifts a little bit in his scuffed-up Skechers sneakers. Ken doesn’t root for any particular basketball team in North Carolina. He and Valvano, though? Both Italian-Americans. Proud Italian-Americans. Ken wears an Italian horn, for good luck, on a gold chain around his neck. It pokes out from a denim shirt that’s tucked into athletic shorts. Ken’s from New Jersey. Valvano was a New York guy. “He had a nice way about him,” Ken says. Now he flips a discus-size burger on the grill. “You know, I wasn’t all that concerned about me when I had my accident. I was worried about everybody else.”

November 2, 1996. Midnight. Up on U.S. Highway 220 north of Greensboro. It was raining. There was a head-on crash. Ken was crushed from the waist down. He was in an induced coma for a week and a half. A priest at the hospital gave him last rites. The knees and hips still hurt. A little. Bruce, the guy Ken helped open a pizza shop next door, ran Kenny’s for nine months. “That’s loyalty,” Ken says. Eventually, he wheeled himself back to work in a wheelchair. He’d already told his two sons he’d come back. “You can tell kids that all day long,” Ken says, “but they gotta see you fight.”

The burger goes out, and a Van Halen song plays on the radio in the back. “Sammy Hagar was phenomenal,” Ken says. He’s got the radio tuned to classic rock. Bryan Adams. Styx. The good stuff. At his old restaurant in the Poconos, Ken says he became buddies with John Oates. Never met Daryl Hall, though. One of his sons plays in a band. By the way, his son is Kenny. The restaurant’s named for him. “I’m Ken,” Ken says.

Out front, a woman flops back in her seat, defeated. “I can’t eat all this,” she says of the burger.

“You can never eat all this,” says Susan Zoppi, the waitress, who’s the only other employee at Kenny’s. The restaurant’s been here for 32 years. Susan’s been here for all but two weeks of that. 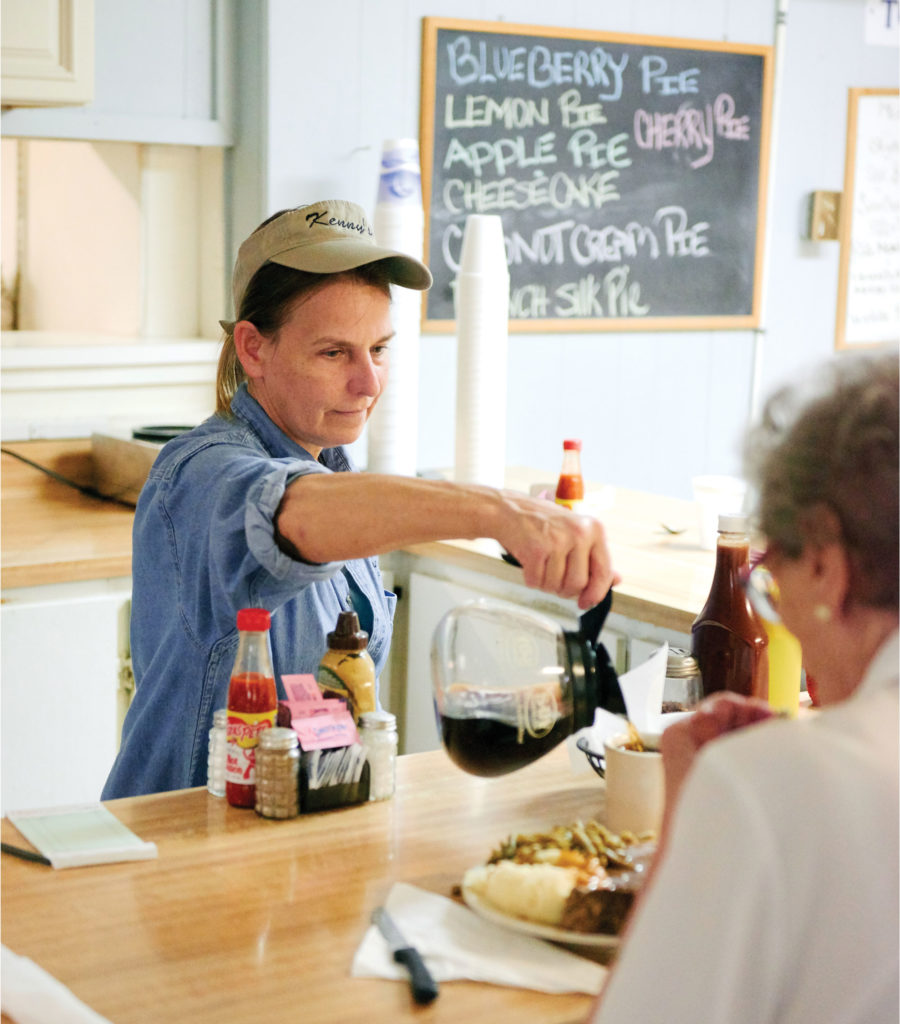 Susan Zoppi, the only other employee at Kenny’s, is as much a fixture of this place as the food. photograph by Joey Seawell

“You see that sign I put out there?” Ken says, gesturing toward the road. “It took me years to put that sign out there, ’cause I’m not one of those guys who beeps my own horn — although I do beep a little bit — but it says, ‘Best burger in town.’” Every day, he gets his meat fresh from a local butcher. “I’m the best restaurant in town, ’cause I’m the only restaurant in town!” Ken says, and laughs hard.

A couple of guys come up front to pay, all with cash in hand. “I couldn’t do it all today, sir,” a young guy in a ball cap and hoodie says, dejectedly, about the lunch he couldn’t finish. Another one mentions that his mom has a produce stand over in Carthage, and maybe Ken might like to buy her strawberries. “Maybe tomatoes?” Ken suggests instead. The guy gives Ken a card.

“Thanks for thinking of me,” Ken tells him.

“I come here every Friday,” the guy responds.

Out comes rotini, covering every square inch of the plate. Roger, a guy at the end of the counter with a stack of paperwork and a flip phone, looks at the menu on the wall. The specials are written in dry-erase marker. The regular breakfast and lunch items are spelled out in plastic letters, next to a TV on mute. Roger wants fried shrimp. Not yet, though, he tells Susan, because he has some work to finish first. Donald, a homebuilder over in Pinehurst, conspicuously talks about the other places where he’s eaten lately. “Stop,” Susan says. She knows Donald’s only doing it to get Ken fired up. It doesn’t take much.

There are a dozen or so people eating at tables at noon, surrounded by wood-paneled walls painted white and pale blue. Kenny’s is half-full. “It’s a tough spot,” Ken says. This town — Pinebluff — isn’t big enough to keep this place open. Thank goodness Pinehurst and Aberdeen are close. This building? Yeah, it’s not fancy, Ken says. It used to be a gas station, then a post office, then a tire store, then a furniture store. The last business here before Kenny’s closed after six months. Ken nods toward U.S. Highway 1, just steps outside the front door. “Speed limit says 45, but they’re going 55 and 60,” he says. “There’s nothing to slow them down. So they gotta know this place. They gotta stop. One time. They stop one time?” Ken clenches his hands together and makes his voice more gravelly: “I GOT ’EM.”

“I need a box, Suze,” says one customer out front.

“I’ve only got one left,” Susan says. She’s joking.

“My wife is actually a way better cook,” Ken says, between orders. He’s not joking. “I’m better at short-order. But my wife’s a phenomenal dinner cook.” Her name’s Cheryl. Met her in Florida, Ken says. At Ray-Mar Beauty College. In a cosmetology class. Ken thought: “If I got old and couldn’t handle a restaurant, I could cut hair.” You’re crazy, Ken’s dad told him. Hear me out, Ken said. There are two guys in the class. There are 25 girls. “Beautiful girls,” he says. “First one I asked out became my wife.”

Susan grabs a plate laden with meatloaf. “Here’s some extra napkins,” she tells a man. “I’m not saying you’re messy. But you might be. You eat here enough, you will be.”

“They get a charge out of my accent,” Ken says of his customers. “When you’re raised in Jersey, you’re used to one way of life. In North Carolina, the second you’re in this state, everybody’s friendly.” They’re more open-minded about food down here. “They try Reubens,” he says. Cheesesteaks, too. “Northerners usually lock into one thing. They got one thing, you can’t talk ’em out of that.” Ken’s parents moved south to Pinehurst a long time ago. “My father didn’t raise lazy kids,” he says. When his father got sick, Ken moved south, too. Then he opened the restaurant.

“You see people come, go, pass on,” Ken says, his voice hushed. “I’ll tell you what moves me. A woman comes in with her husband. For years. He’s up there in age, in his 80s,” Ken says. Then the man got sick. “His wife says, ‘What can I do for you?’ He’s in the hospital. He’s dying. And he says to her — I get emotional when I think about this — he says to her, ‘I’ll tell you what you can do for me. Go down to Kenny’s and get me a cheesesteak.’ And to think the guy is dying, and he’s thinking about a sandwich I made? It’s not that big of a deal, right? But that’s what he wants. And that makes me feel good. That makes me feel really good. That they would think of me.”

Ken’s eyes well up. Just a little. Then he goes back to the kitchen and, minutes later, passes a heaping plate of hamburger steak, mashed potatoes, gravy, green beans, and Texas toast over to Susan, who slides it onto a table in front of a customer. The woman looks at it, all of it, and says the only thing that comes to mind: “Oh, wow.”