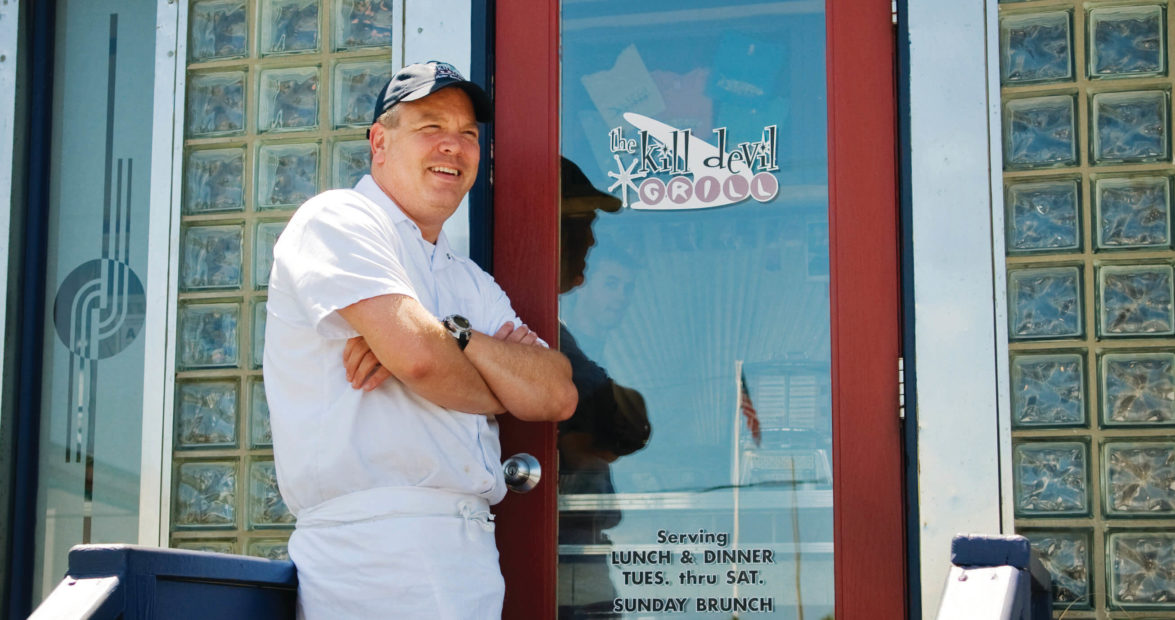 Kill Devil Grill is hopping, as usual. The seats are filled, the grill is sizzling, the jazz is swinging, the conversations are buzzing, and the waitresses are whizzing by with armloads of plates. But the man in charge, Bill Tucker, wearing houndstooth chef’s pants and gripping a Mountain Dew, is smiling and composed as he slides into a corner booth to tell me, in his fast-talking, animated style, how he created this happening Outer Banks restaurant in a diner by the sea.

Tucker says a moment of clarity at a corporate leadership seminar in the late 1990s had him outlining a set of long-term goals that didn’t reflect the path he was on with his job as area director for six restaurants in Washington, D.C.

While his restaurant-industry peers listed their lofty goals — earning six figures and buying Lamborghinis — Tucker remembers being a bit surprised and embarrassed by the five-year plan he found himself reading out loud to the group:

1. Live at the beach
2. Wash dishes
3. Have a dog
4. Not be married but have someone that I’m thinking about marrying
5. Have a car but not need it

After the seminar, Tucker kept his job in D.C. but was growing increasingly frustrated with the traffic and his 12-miles-in-90-minutes commutes. When the events of September 11, 2001, occurred in New York and nearby at the Pentagon, it was the wakeup call that prompted him to do something new.

“That day made me reflect,” Tucker says. “I was in my mid-30s and I thought, ‘At my age, if I’m ever going to do my own thing, I should do it now.’ I knew that whatever I did next, I’d have to put blood, sweat, and tears into it, and I needed to do that before I got too old.”

He wanted to open his own restaurant. With a college degree, a certificate from the American Culinary Federation, and about 10 years of restaurant management experience, it was the next logical step.

He considered heading to his hometown of State College, Pennsylvania, or following his dream and moving to the beach. When he learned that an alcohol license in State College cost more than an entire restaurant at the beach, the decision was made.

On a restaurant-scouting trip to the Outer Banks in 2002, he happened upon an interesting little nugget on the beach road in Kill Devil Hills — a 1939 Kullman diner car and restaurant, formerly Millie’s Diner, listed on the National Register of Historic Places. It had been meticulously restored but had been sitting empty for three years. With stainless trim, rounded glass-block corners, painted metal siding, and Art Deco details outside, plus Formica-topped tables, a classic lunch counter, black-and-white tile floor, and red and stainless stools inside, the diner was a classic brimming with hip, vintage appeal.

Tucker bought it and moved to Kill Devil Hills. Goal No. 1: Check.

Tucker and his original partner, Jim Jackson, knew they had to find the perfect niche for their Outer Banks restaurant. The diner exterior had proven a challenge for the previous restaurant owners, who served gourmet fusion cuisine.

“The diner sends off a certain image,” says Tucker. “People have certain expectations of what diner food is supposed to be like. I learned pretty quickly to embrace the diner.”
Tucker and Jackson decided on a casual restaurant where the food is simple and fresh, not cheap, but great and affordable enough for people to eat every day.

The first year didn’t go as well as they’d hoped. Jackson, who had a family to support, opted out. With their friendship intact, Tucker bought Jackson’s half of the business and carried on alone. That left him cooking, waiting tables, managing the business, and washing dishes. Goal No. 2: Check.

Tucker persevered with his original intentions for the food — unpretentious American cuisine for a good price. A peek at the menu reveals: grilled local fish; lump crab cake sandwiches; organic-beef burgers; chicken wings that have been rubbed, smoked, and grilled in-house; crisp creative salads; grilled white pizzas; bruschetta; pasta; shrimp; chicken; ribs; and award-winning Key lime pie, all of it made in house.

The menu is well-rounded but purposefully restrained, which gives Tucker and his kitchen staff the most creative leeway on the chalkboard specials. This is where you’ll find local organic produce from nearby farmers and seafood from local waters, like Colington softshell crabs or local flounder or rockfish, or Gulf Stream tuna, mahimahi, and wahoo, when available.
Some of the most popular specials, like fried chicken and chicken and dumplings, are reminders that customers like simple food made with Tucker’s fine-dining execution.

“I keep it simple because I want to do everything well consistently with a smile,” says Tucker. “I want people to have a good time and the people who work here to have fun, too.”

Open seven years now, Kill Devil Grill pulses with activity every day and night of the week. The lively atmosphere and food appeals to locals and, increasingly, to visitors. At lunch, it’s not unusual to see professionals in Polos dining alongside construction workers alongside tourists who have just walked across the street from the beach. At dinner and Sunday brunch, you’ll find families, couples, and groups of friends.

At the heart of it all is Tucker, an immediately likable, generous, hands-on host who believes in the power of word-of-mouth. He prefers to spend his advertising budget taking care of the regulars and building repeat customers. His philosophy: “Once I get you in, I want to lure you back.”

That philosophy has worked with a loyal following, like Lori and Kevin Kopec of Kill Devil Hills.

“We have eaten at Kill Devil Grill every Friday night for the past six years,” says Lori. “The food is wonderful, and the staff is fantastic. … It’s gotten more and more popular over the last six years. In the summer, we get a little peeved when we have to wait for a table, but, of course, we make do at the bar.”

Tucker is still tugged in many directions, but now he’s got plenty of help to pull it off, including his right-hand man, David Powers. Powers coming on board six years ago helped Tucker find a little more time for himself. So he got a chocolate Lab, Rudy, three years ago. Goal No. 3: Check.

His wife, Liz, whom he married last October, also works in the restaurant. Goal No. 4: Check.

Everything has lined up pretty much as Tucker imagined it 10 years ago.

“Bing. I’m happy,” he says. “I didn’t come here to get rich. I came to run a great restaurant and have a decent lifestyle and pay my bills.”

The only thing he hasn’t yet attained is Goal No. 5. Tucker owns a car, but he needs it to get to work.

It’s good to have a goal.