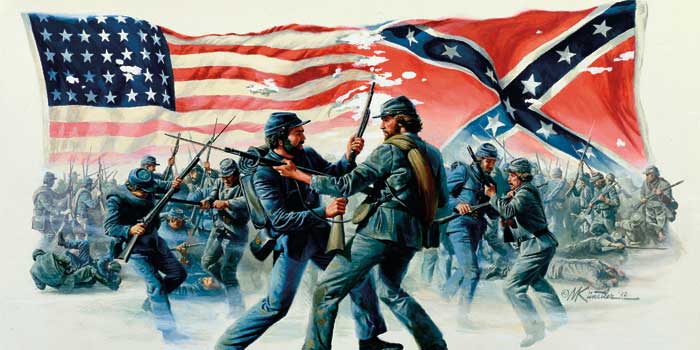 The invading force of five brigades moves by train into eastern North Carolina from the north in the last days of a bitter cold January 1864: 13,000 infantry and cavalry troopers, fortified by artillery batteries and including a special detachment of 100 marines for an amphibious assault. They are mostly Virginians, but include the 43rd North Carolina Regiment.

This is a strange and paradoxical moment in the war: a Confederate Army invading one of the states of the Confederacy to fight citizens of that state. In the conflict to come, North Carolinians fight on both sides.

The expedition takes the field under the nominal command of Maj. Gen. George E. Pickett, a Virginian of the planter class. But the real commander is Robert F. Hoke, a handsome, brash North Carolinian. At age 27, Hoke is the youngest major general in the Confederate Army. Hoke is the hero of Cold Harbor, the man whose stubborn troops stopped Gen. Ulysses S. Grant’s bold advance, rumored to be Gen. Robert E. Lee’s handpicked successor, should Lee ever succumb to illness or wounds.

Although Lee issues the order, Hoke is the author of the complicated plan of campaign. The Army stages at Kinston, a river town, then proceeds 32 miles to New Bern in three columns, each with designated objectives:

General Pickett and General Hoke’s main body is to follow the corridor between the Trent and Neuse rivers, knock out the star fort, and descend on the town in a surprise attack.

Gen. Seth M. Barton’s column, the most formidable in numbers and guns, will capture the vital railroad and cut the telegraph lines to prevent the regiments at Morehead City from reinforcing the garrison. Barton’s force will then capture the Neuse River bridge, attack across it, and take the Union position from the rear.

The night before the attack, a fleet of small boats will carry the marines down the Neuse River close to the moored Union gunboats, so they can be scuttled.

General Hoke has another objective: to capture North Carolina troops serving in the Union Army — many of them rumored to be Confederate deserters.