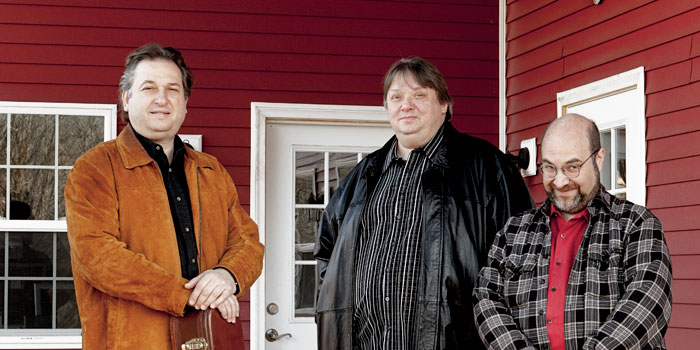 When Jens Kruger tunes up his banjo, you hear echoes of different European influences — French, Irish, Italian, and his native German — and flourishes that make the instrument sound like flamenco guitar or even Indian sitar. And he’s not afraid to bend notes to turn them blue.

“Maybe you’ll hear a little bit of where your ancestors come from in this next piece,” Jens says from his seat on the stage of Raleigh’s Fletcher Opera Theater with his brother, Uwe, beside him. “Almost everybody in this country came here through immigration, whether by free will or not.”

“Morning at Deep Gap” opens the first movement, and it proceeds like dawn gradually breaking over the land. Jens’s banjo, Uwe’s guitar, and Joel Landsberg’s bass creep in, as if they’re shadows becoming visible in the growing light. The music becomes more structured and accelerates until, by the time the first movement concludes with “Wild Horses,” the entire ensemble plays at the pace of a brisk gallop. Jens’s banjo sets the pace and Uwe’s clean, Doc Watson-style flat-picking locks in right behind.

‘Write your own music’

People have written countless songs about the Appalachian Mountains within the past two centuries, songs that evoke aspects of beauty, wildness, and scale. Appalachian Concerto brings all of those qualities to mind, from the viewpoint of a new arrival.

“That idea of immigration was intriguing to me, and also the way you can disappear into the vastness of Appalachia,” Jens says. “Appalachian Concerto is this romantic idea of people coming here from a lot of different places and how they got here, the different flavors and cultures they bring. And about the mountains themselves, of course. ‘As Far as the Eye Can See’ is about realizing how big this country is. If you stand on Grandfather Mountain, you see no signs of civilization, just rolling hills. Most places in Europe, there are crosses or cable cars on every mountain.”

The Krugers moved from Switzerland to Wilkesboro in 2003. But their history with American music began when they listened to country radio as children. Jens and Uwe started playing the guitar and banjo, and Jens came to America in the early 1980s to play with the patron saint of bluegrass, Bill Monroe.

When Monroe asked Jens about his aspirations, Jens told Monroe he wanted to play bluegrass music.

“You can’t because you’re not from Kentucky,” Monroe told him. “Go home, write your own music, and then come back.”

Jens took Monroe’s advice and played with his brother in various ensembles, configurations, and styles in Switzerland. In 1995, Jens and Uwe connected with Landsberg to form the Kruger Brothers. With an ensemble approach more like a classical string quartet than a bluegrass band, they forged an elegant musical blend steeped in European and American styles.

As they made their way on the American folk circuit, the Kruger Brothers felt attracted to North Carolina and scored their first Merlefest booking in 1997. When they decided to move to America, they settled in the festival’s hometown of Wilkesboro. It just made sense. They dubbed their style “new Carolina music.”

“It’s like the state motto, ‘To be rather than to seem,’ ” Uwe says. “The music is like that for real here. You drive around and see people playing on their porch, which you don’t see anywhere else nowadays. The whole state is kind of like that image of Ireland, where the whole pub starts singing. Music is not a spectator sport here.”

They followed their move with a well-received series of albums, tours, and festival appearances that led to Appalachian Concerto. The Ashe County Arts Council commissioned the album, and Jens composed a piece that created a new place in the musical world for banjo.

“I was proud of Jens for taking the banjo into a new context, melding it with classical,” Uwe says. “It’s a revolutionary step.”

Thematically, banjo is the appropriate instrument for Appalachian Concerto, and not just because of its prominent role in traditional old-time music. The banjo originated in Africa but became one of the principle instruments in American folk music. In the right hands and the right context, a banjo sounds high and lonesome, such as in “Gone But Not Forgotten,” the penultimate track of Appalachian Concerto.

Jens likens “Gone But Not Forgotten” to an immigrant’s realization that people, places, and things left behind may be gone for good. It’s reflective rather than sad, but the overall feeling is melancholy. To create that mood, Jens opens the piece with a solitary, deliberately paced banjo solo.

“To me, the banjo is the idea of being somewhere else,” Jens says. “Music in the South leaves room for imagination and always has. It’s not music to find reality, but to make one.”

David Menconi is the music critic for The News & Observer in Raleigh. David’s most recent story for Our State was “Old Hat Records” (February 2012).