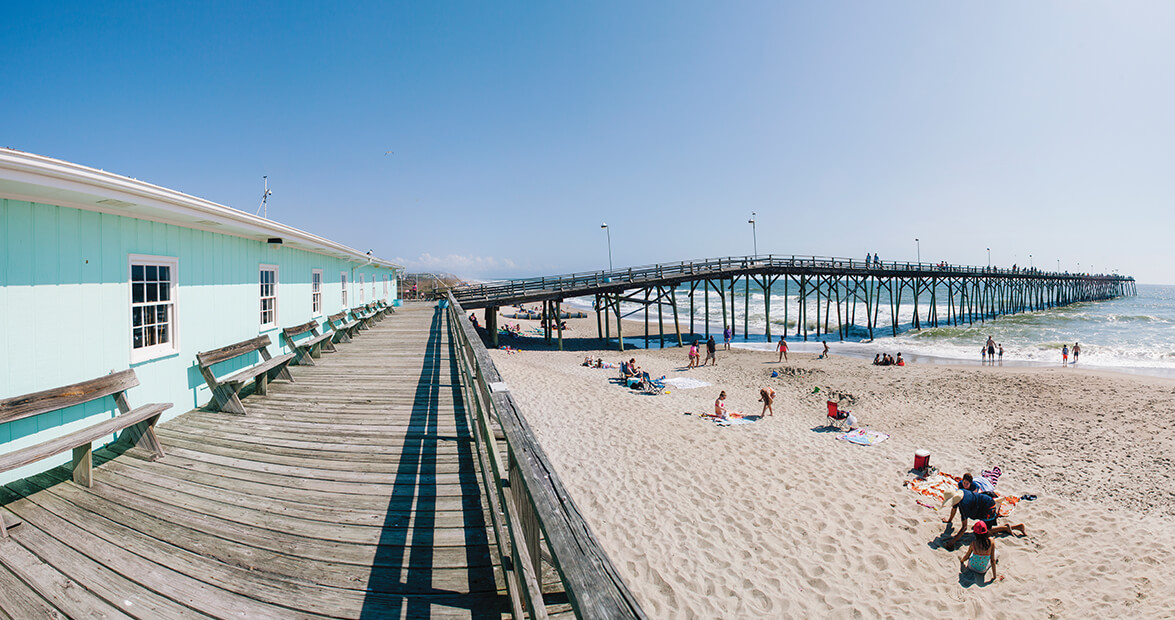 Just down K Avenue, past Wilmington, past Carolina Beach, past the boardwalks and beach retreats and the bright green Beach House Burgers, a sign has welcomed generations of fishing families to the wooden boards and pilings jutting more than 700 feet into the Atlantic: “Man! You should have been here last week!”

“People start coming with their little children,” says Mike Robertson, whose grandfather L.C. Kure built the pier back in 1923. “After a while, those children become teenagers and want to go to Myrtle Beach or wherever, so I don’t see them for years. But then something happens. Those teenagers grow up and have children, and the family comes back years later with those grandchildren.”

Because it’s open 24 hours in the summer, the pier never sleeps; people come to fish, stroll, or hang out around the clock. Seemingly simple scenes unfold on the planks, scenes similar to those from L.C. Kure’s day: Strangers and friends and families listen to the hushed beat of the ocean’s waves and the tune of fishing line, wait for fish to take their bait, and get to know each other a little better.

Mike, who bought the pier from his father in 1984, makes his living from the sea — a legacy that began when his great-grandparents immigrated to North Carolina from Scandinavia in the late 1880s. 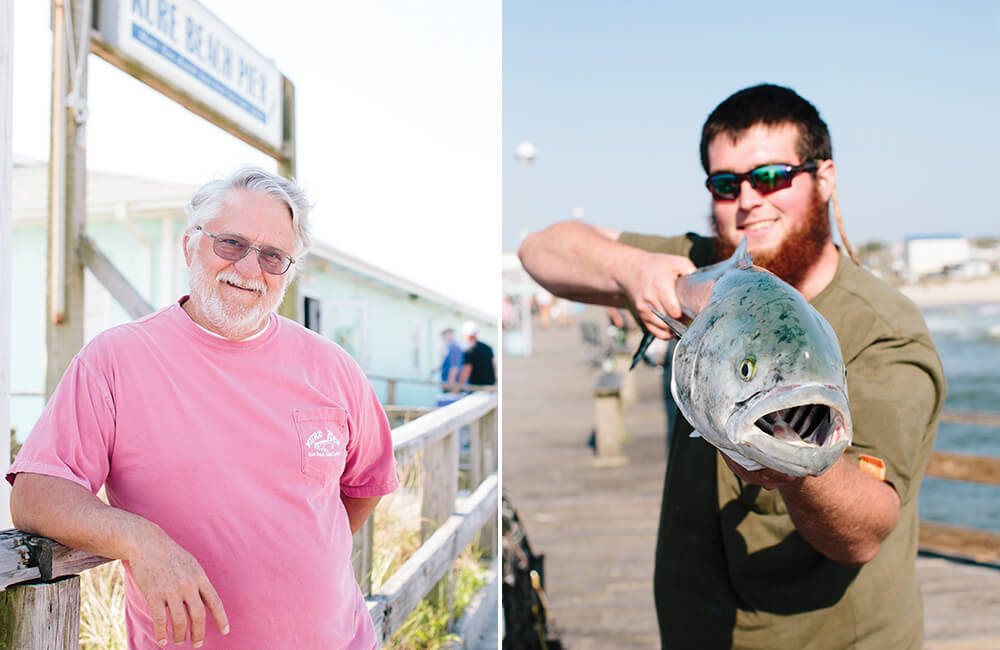 From left: Mike Robertson has been sharing tips for fishing his pier for more than 30 years. Kure Pier regular Grayson Lanier hasn’t been fishing for quite that long, but he knows when the bluefish are biting. photograph by Millie Holloman Photography

According to family lore, Hans Kure was a ship’s captain and his wife, Ellen, a lady-in-waiting at the Danish court. Between them, they spoke eight languages and used their ability to connect with people to make their Wilmington ship chandlery business a success.

Hans bought the 1,500-acre tract that was to become Kure Beach, and he and his sons, including L.C., incorporated the parcel to develop it. In the early 1900s, Kure Beach was isolated: The only way people got there, besides horse and buggy, was by a steam ship and then riding a mile or two of railroad. But Hans saw the future value of the coast down that long road, and L.C. saw the value in bringing people together.

“There wasn’t any place to fish off the coast in North Carolina at the time,” says Andrew Kure, Mike’s cousin and L.C.’s nephew. So L.C. built a pier to attract fishermen.

Within a year, shipworms ate through the pine pilings, and the pier collapsed. L.C. built the pier again, modifying his wood to make it worm-proof. This time, a storm washed the pier away. He rebuilt the landing again, tinkering, improving, sometimes starting from scratch after more than six storms scuttled the pier under his oversight.

Each time, after L.C. resurrected the planks and pilings, the people returned. They dropped their lines off the pier’s edges, sat with their buddies, relaxed under shelters. L.C.’s pier, the first pier, became the place above the Atlantic’s waters that would always be waiting for them.

Though the boards were replaced, and the pilings hourglassed away by nature were restored, the pier remained mostly unchanged. For more than three decades, it was just a good place to catch a fish.

The restaurants, gift shop, and arcade, where Kure Beach pier-goers linger near the counter for weather-talk and fish tales, didn’t come from a Kure at all. These were the constructs of Bill Robertson, a man from Bixby in Davie County who fell in love with L.C. Kure’s daughter, Jennie. He bought the pier from L.C. in 1952. Never much one for fishing, Bill, Mike’s father, knew how to sell.

It was under Bill’s ownership that the pier grew to become the Kure Beach Pier we know today. He didn’t fish, but he did have a background in advertising, and he used his skills to promote the pier. “My dad knew how to press the flesh,” Mike says. “But with my grandfather, it was just a fishing pier.” 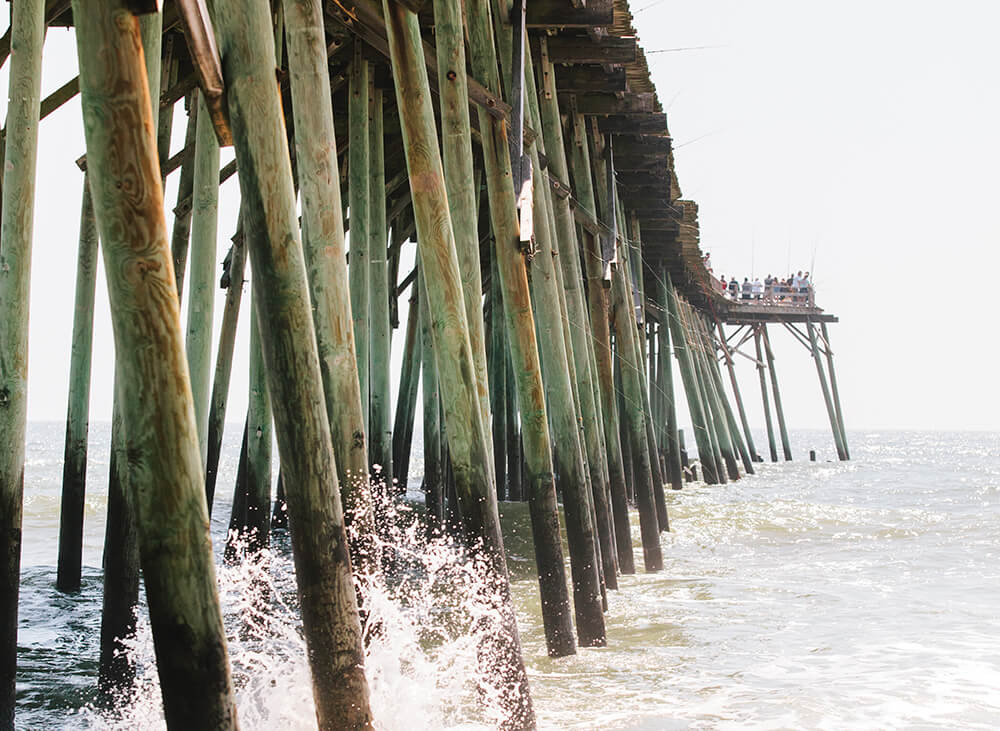 Bill put in a bingo hall and came up with the pier’s slogan, under which pier-goers have passed on their way to fish since the 1950s. And Bill, like L.C., built and rebuilt the pier. “My dad had about 11 damaging storms in a 10-year period,” Mike says.

Mike wanted to continue the tradition of making the pier everybody’s. He and his employees open the pier like a home to anyone who wants to come. They have coffee ready for the morning folks, ice cream ready for those in the afternoons and evenings, and conversation ready all day long.

“Anyone who works here has to know fish and love people,” Mike says. “They got to.”

He and his wife, Lisa, took up the Sisyphean work of his father and grandfather: laying boards over the ocean for people to gather on and for storms to knock down.

“I never get far from the fact that it could be gone tomorrow,” Mike says.

It’s early afternoon, and all the way down the boards, Kure Beach Pier families shift and sway with the pilings. At the end of the pier, the Bakers of Thomasville and the Crossens of Trinity set up camp, their king mackerel rods propped against the railing, the sounds of close friends sharing peanut butter sandwiches mixing with the peculiar sea-song tune of the wind gently blowing through taut fishing line.

Like many Kure Beach Pier visitors, the families return to the pier to commune with each other whenever they can. They huddle together under the pier’s small shelter and stay there from midnight to sundown, for days at a time. It’s impossible to tell which person belongs to which family in the tangle of children and adults relaxing, waiting, and caring for each other there at the pier’s T-tip. Making friends is part of the landscape of this place.

In the early morning, after the nighttime anglers have reeled in their lines, the ribbon fishers on the beach pull their glow sticks from the water to make room for the king mackerel fishers at the T-tip. Flounder and spot folks huddle along the tide line. The sky’s clear. It’s quiet, save for the flap and tap of pelicans as they take their stations for the day along the pier’s dry wooden rails.

This is Mike’s favorite time on the pier. He walks the salty planks and settles on a bench along the edge of the pier that he’s rebuilt at least seven times. He greets, he watches, and he thinks. “The hustle and bustle gets going around 10 a.m.,” he says, “but early in the morning, someone’s going to stop by and say hello and tell you their stories.”