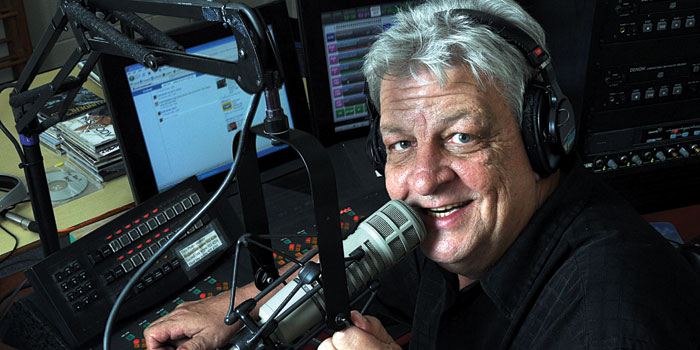 As Kyle Beam delivers his message, the 61-year-old’s deep, rich voice takes on the swinging tempo of an evangelist delivering a fiery Sunday sermon. Sometimes his words crescendo as his voice swells into a final point. Sometimes he speaks softly and lets a song drive the rest of his sentence home.

Regardless of volume, Beam’s voice is so intoxicating to listeners, they often forget they’re tuning in to hear music. But at Gaston College’s WSGE, the music is here, and Beam, known as The Right Reverend of Beach Music, is right here with it.

The Reverend spreads the gospel of beach and shag music during the “Sunday Night Beach Music Revival.” Located in Dallas, just a few miles from Gastonia, WSGE 91.7 is far from the ocean and late-night, pavilion dances. But when you listen to The Reverend’s show, it’s easy to picture yourself by the sea.

Beam doesn’t get paid. Like most of the DJs at the noncommercial, public radio station, he’s a volunteer. During the day, he works as the vice president of sales for Precise Power in Belmont, but as soon as he walks into the control room at WSGE, he becomes The Reverend. Beam, who has volunteered at the station for 10 of its 32 years, works to keep shag music alive for his generation and the ones that will follow.

As a DJ, Beam reconnects with the music he loved as a young man. The Cherryville native grew up in the mid-’60s when all teenagers crossed the Catawba River Bridge to visit a nightclub called The Cellar in Charlotte. That’s where he saw Billy Stewart, a legendary R&B singer, perform for the first time.

“It makes cold chills run over me right now just thinking about it,” he says.

It wasn’t uncommon to see The Temptations, The Four Tops, Doug Clark and the Hot Nuts, and Smokey Robinson & the Miracles all in one night at Park Center, now The Grady Cole Center, in Charlotte.

“We grew up when this music was exploding,” he says.

As commercial radio gets less personal with syndicated shows and nonlocal DJs, WSGE reminds listeners what radio used to be when DJs talked about more than celebrity gossip and laser eye surgery. Beam talks about real things and real people.

During one show, he joked with Appalachian State University fans making their way up U.S. Highway 321 to a football game. And it’s not uncommon for Beam to mess up on the air. A song might skip; you might hear him talking when you’re not supposed to; there might be a few seconds of dead air.

There’s no script. Sometimes, listeners even call him to joke about his mistakes.

That’s fine with Beam. What matters most to him is that people are discovering and enjoying the music that means so much to him. He was part of its birth, and he’s determined to be part of its future.

Kyle Beam’s favorite beach music songs can change daily with his mood, but there are 10 classic tunes he can’t forget. Five are for listening; five are for dancing.

Just good listenin’
1.“Miss Grace” by The Tymes
2.“Thank You John” by Willie Tee
3.“Cool Me Out” by Lamont Dozier
4.“Shakin’ the Shack” by The Fantastic Shakers
5.“Over the Rainbow” by Big John Thompson

Shag to this
1.“Three Thirty Three” by The Drifters
2.“Come Get to This” by Marvin Gaye
3.“A Donut and a Dream” by The Mills Brothers
4.“I’ll Be Satisfied” by Jackie Wilson
5.“Surely I Love You” by Rosco Gordon

Lori K. Tate is a freelance writer who lives in Cornelius with her husband, John; their 2-year-old twins, Graydon and Margot; and their tabby cat, Azalea. Lori’s most recent story for Our State was “Concord” (June 2011).