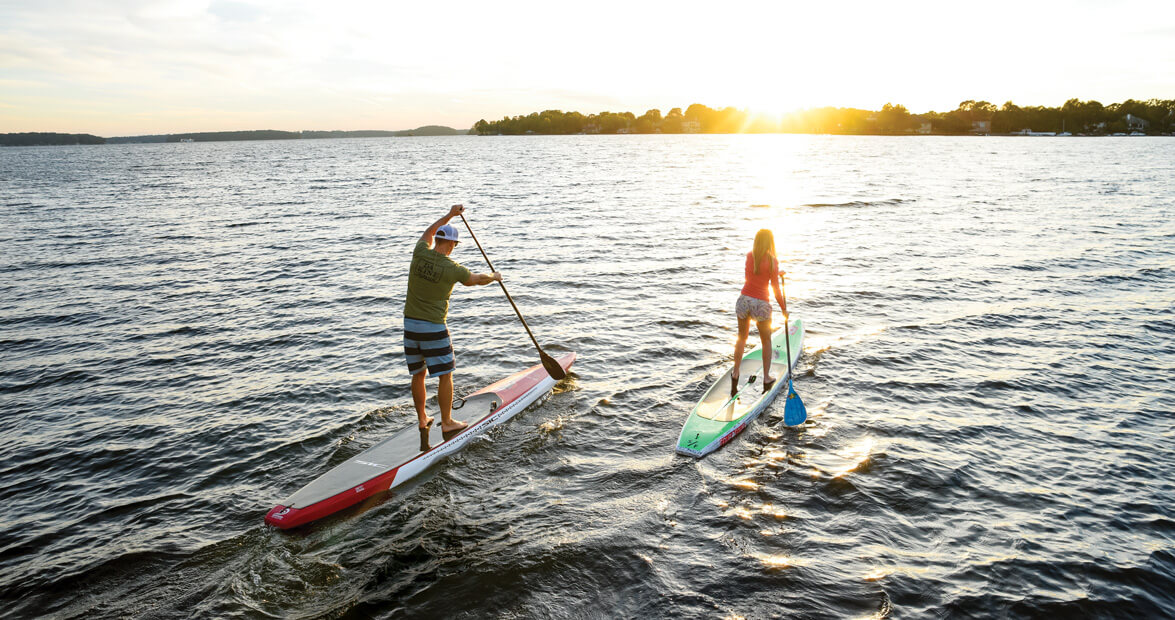 The towns were there first. Mooresville and Davidson, Cornelius and Huntersville — all were founded long before Lake Norman was a spark in the mind of a power company executive. In 1963, Duke Power completed the Cowans Ford Dam to harvest electricity from the Catawba River. The lake began to fill, and the future of these once-rural towns was forever altered. Today, Lake Norman reaches its watery fingers into four counties and across 32,500 acres. It has shaped the geography, culture, and identity of a region, turning farmlands into vacation destinations. The water isn’t always visible from the communities that dot its shoreline, but you know it’s there, just beyond the trees.

No, you can’t see Lake Norman from the corner of Main Street and Moore Avenue. What you can see: the historic heart of a community that got going with the railroad in the 19th century. Mooresville has been a farming town, a textile town, a lakeside town. (It was known for a time as the “Port City of Lake Norman.”) It’s grown a lot since those early days, but here on its downtown sidewalks, it still has plenty of small-town charm. 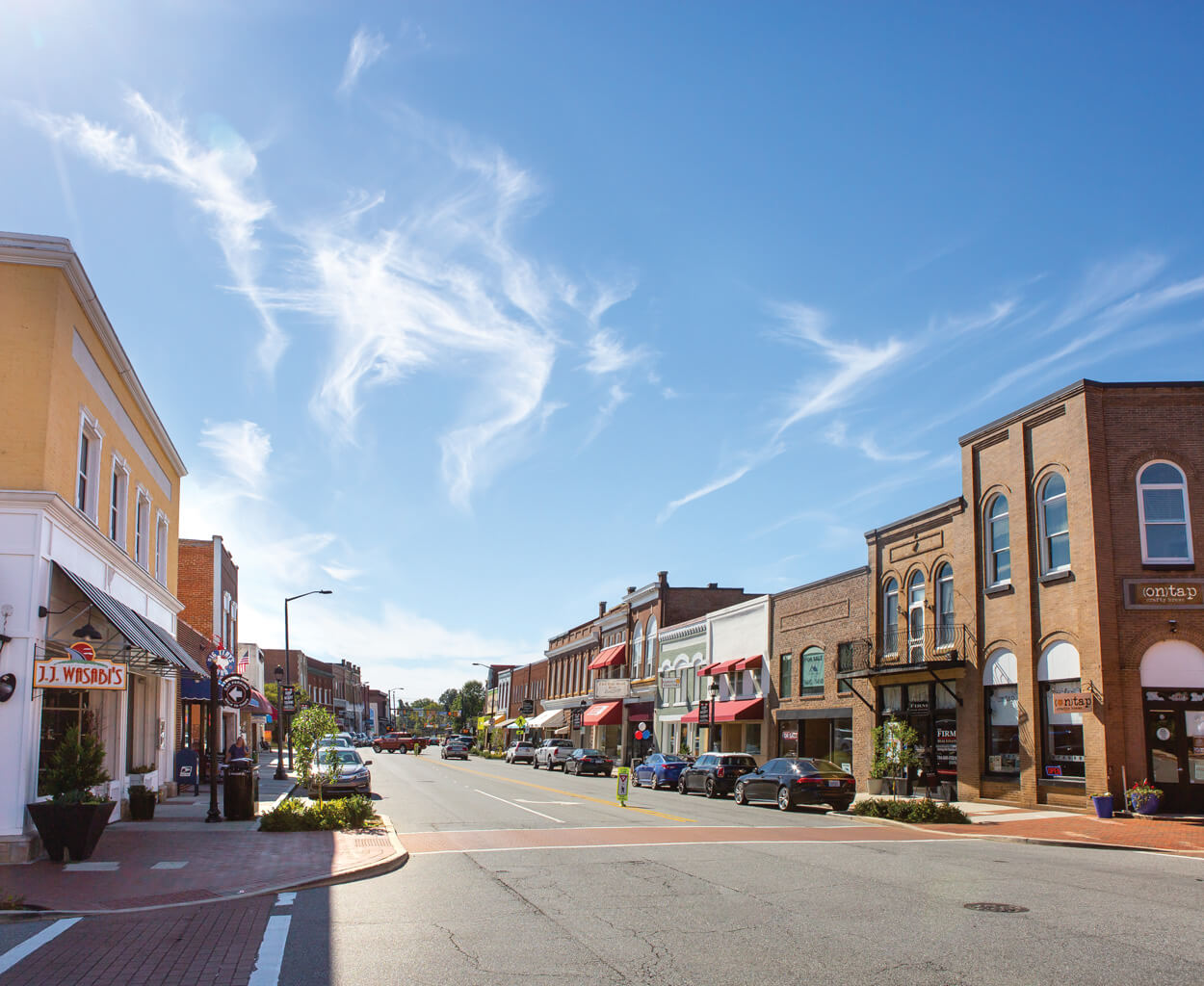 In the 1980s and ’90s, more than 50 NASCAR teams set up shop in Mooresville, earning the community a new moniker: “Race City USA.” The North Carolina Auto Racing Hall of Fame and Memory Lane Museum feature stock cars, racing suits, and die-cast model automobiles on display — a history of the sport in objects. On North Broad Street, American Classic Antique Mall is a “museum” of a different kind, yet every bit as packed with local history. 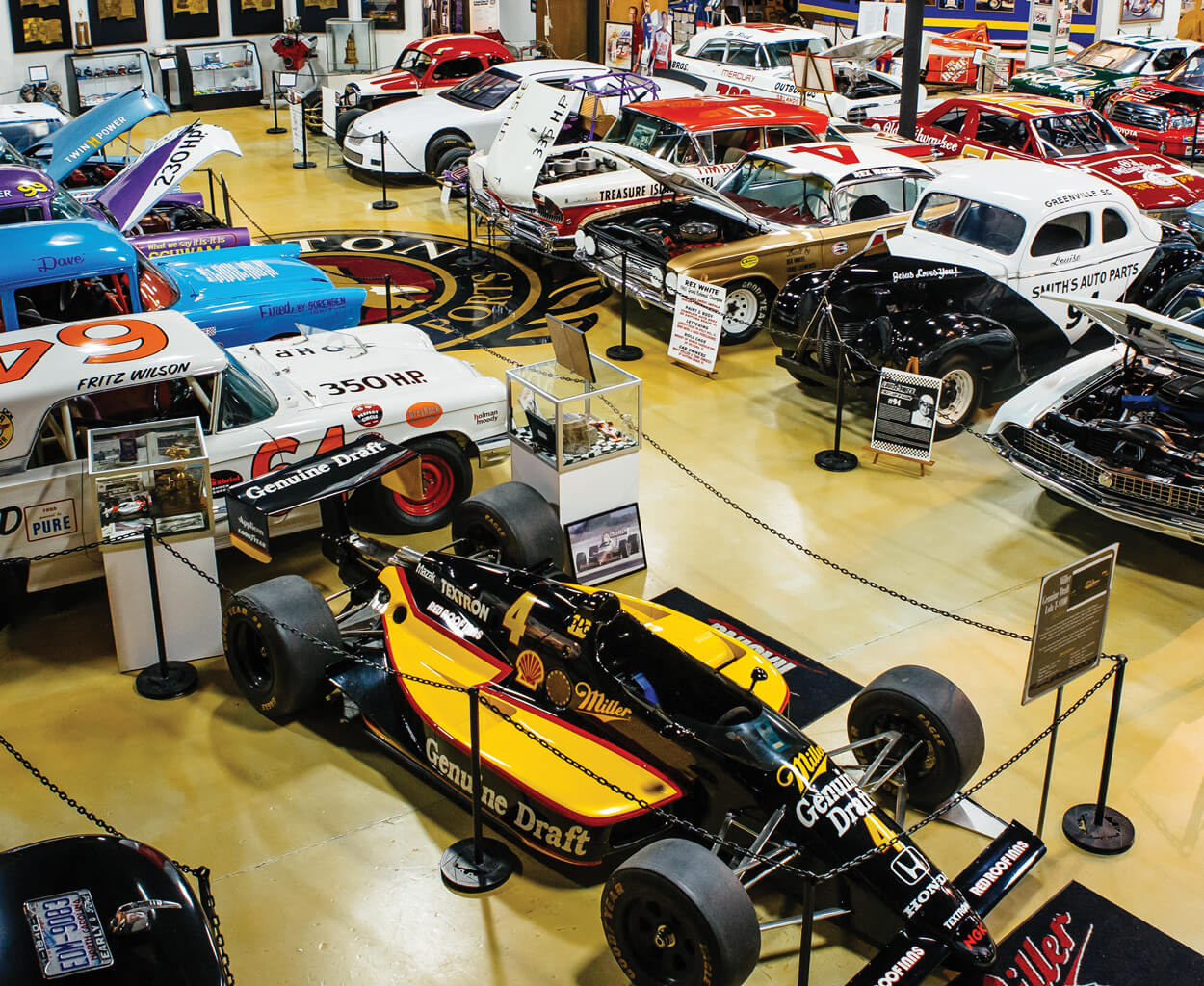 Mooresville’s NASCAR history has left a few tread marks on the community. photograph by Tim Robison

Those yellow umbrellas are an icon of Davidson where this college town meets the water. On sunny days, North Harbor Club’s patio offers an unbeatable view of the marina — including nine slips for diners who prefer to boat their way to crab cakes, shrimp and grits, and lobster mac ’n’ cheese. 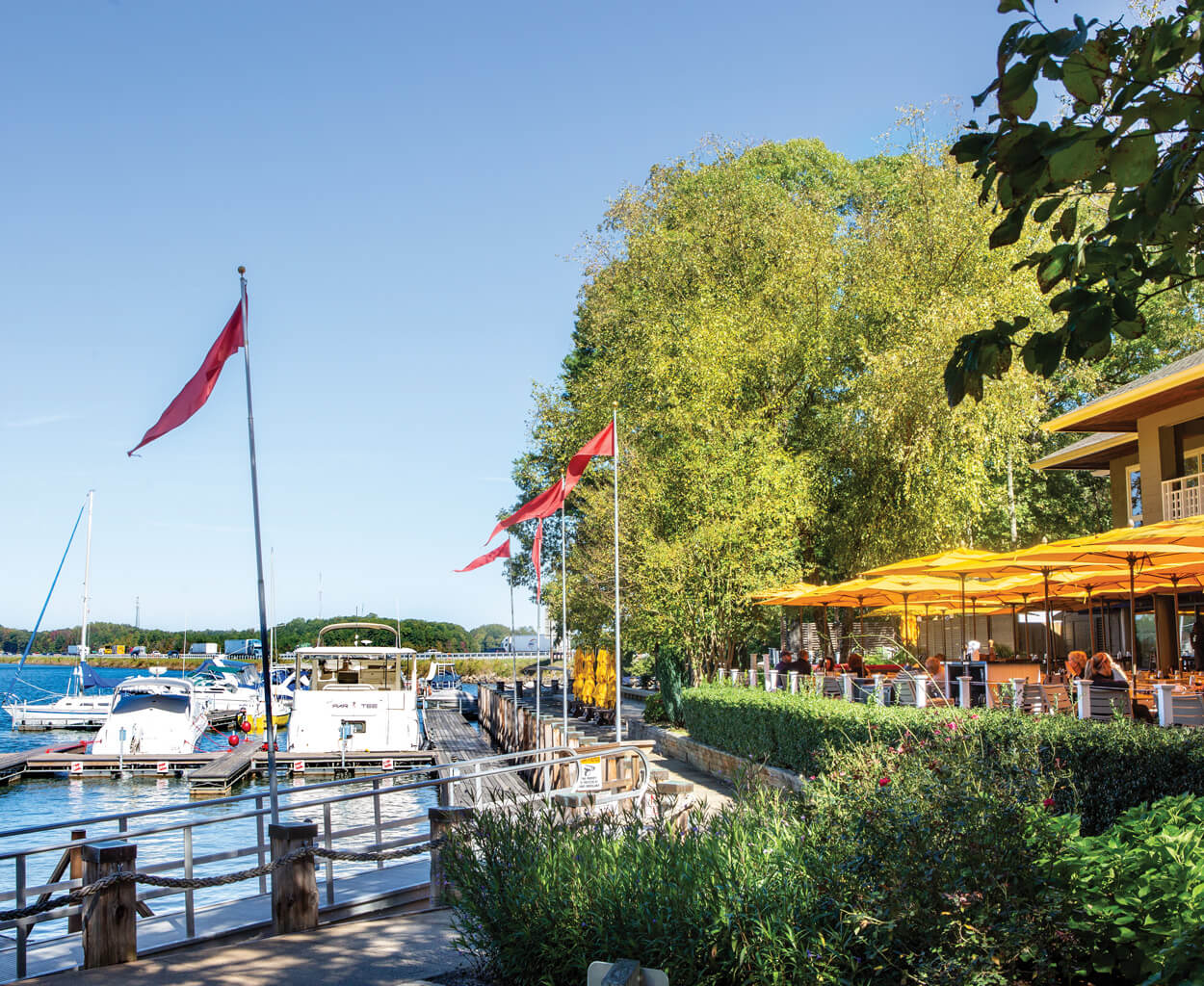 Soak up the summer sun on the North Harbour Club’s patio. photograph by Tim Robison

Davidson’s history is so entwined with the college located there that the two were founded the same year — 1837 — and the community itself was originally known as Davidson College. So it makes sense that town and gown remain closely tied. Summit Coffee Co. is owned by a pair of alumni, and its flagship location — or “Basecamp Cafe” — has caffeinated (and employed) students since 1998, when it opened in a 19th-century building on Main Street, across from the school. A second location — “The Outpost,” naturally — is right on campus. 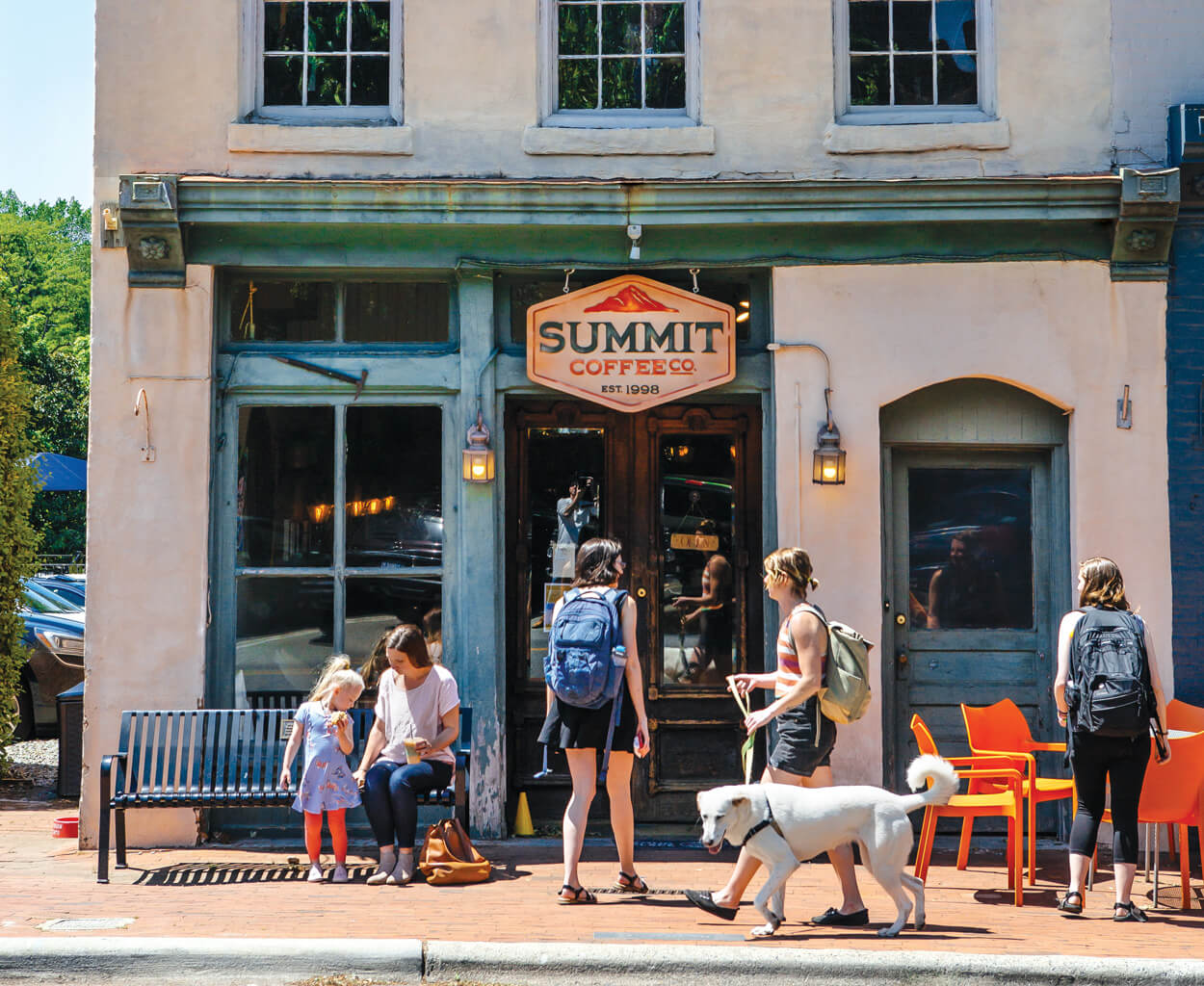 Welcome the day with a delicious brew from Summit Coffee Co. photograph by Tim Robison

Davidson’s real-deal ’50s diner opened as the M&M Soda Shop nearly 70 years ago, and the place is charmingly unchanged. You can still take a seat at the old-fashioned lunch counter and order burgers, dogs, and “unnecessary necessities” like sundaes, shakes, and floats (your choice of soda). Flip through the photo albums stacked at one end of the counter to see Wildcats from generations back. Many of them likely fueled up the same way: with a Big O(rangeade) or a Big L(emonade) and a chicken salad or pimento cheese sandwich. 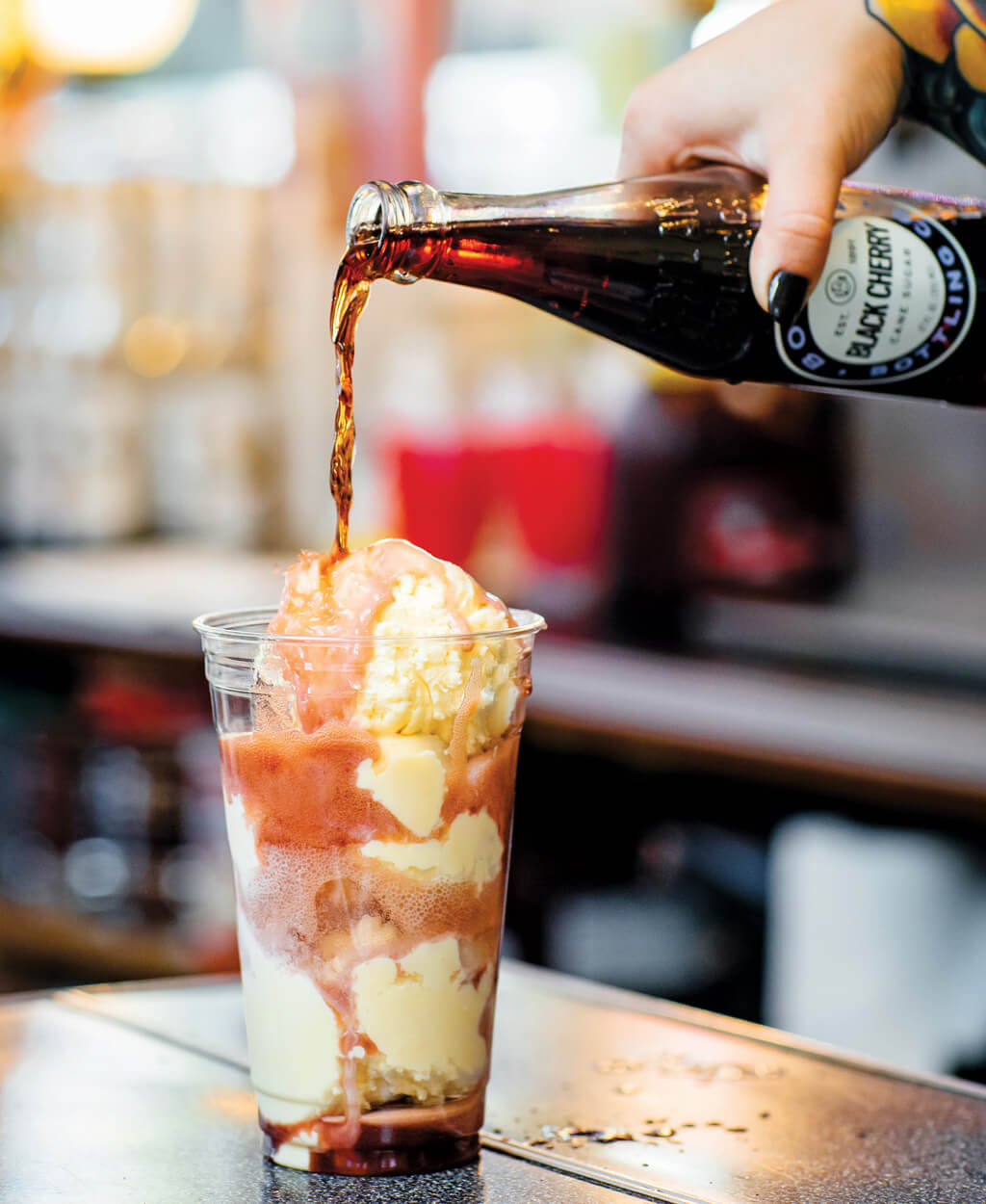 An ice cream float is the perfect treat on a summer’s day. photograph by Tim Robison

“Grandma-style pizza”? Think rectangular, baked in a sheet pan. Executive Chef Bill Schutz borrowed the idea from the nonnas of Long Island, New York, where he grew up before working in kitchens around the world and, finally, settling in North Carolina. If your grandma didn’t make a signature pizza, try Schutz’s “Pigs on a Wing”, with fennel, Italian sausage, mozzarella, and basil. And add a field lettuce salad with shaved fennel and Green Goddess dressing — Grandma would want you to eat your greens. 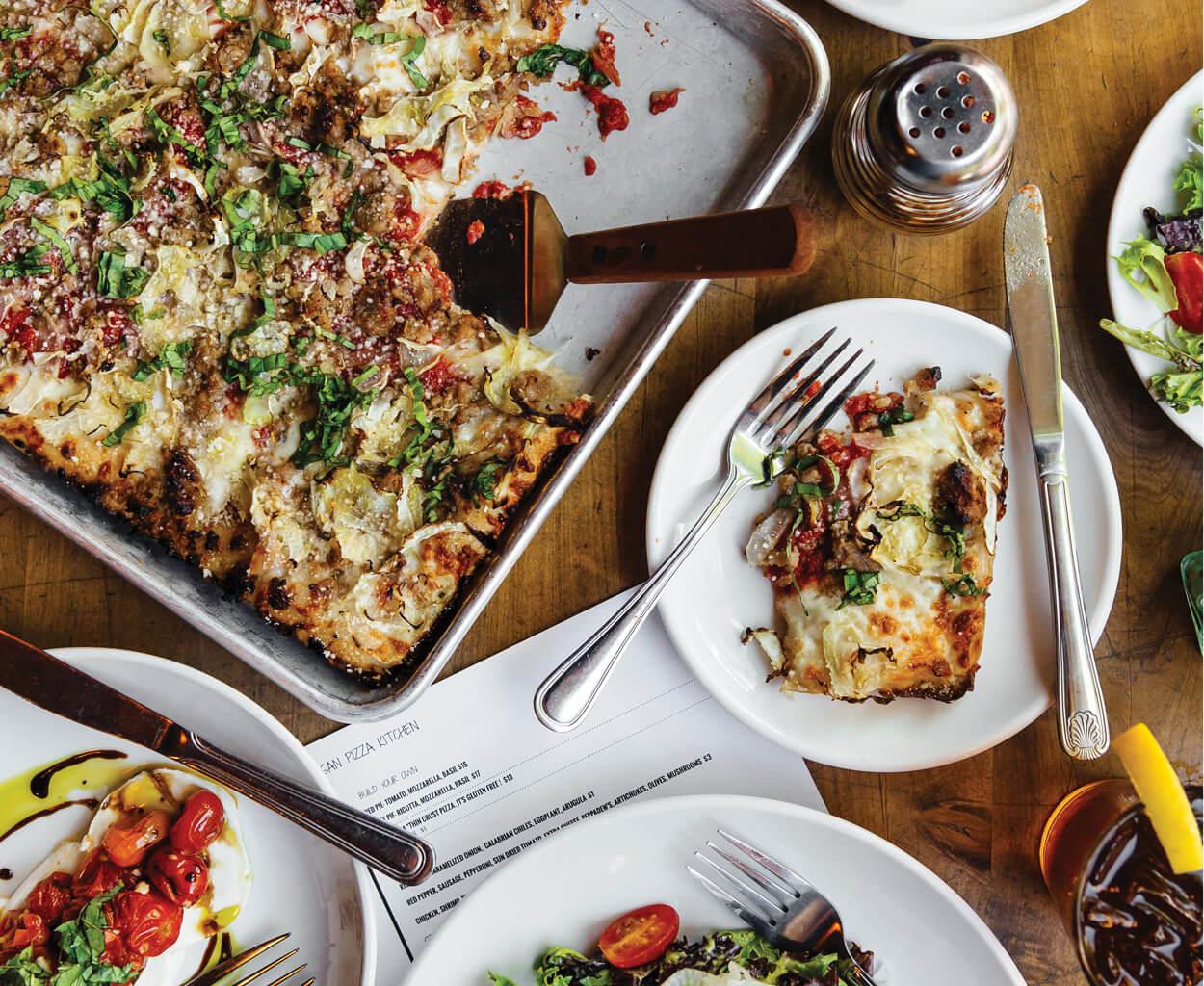 A slice of “Pigs on a Wing” will leave you feeling more than satisfied. photograph by Tim Robison

By now, you’ve heard of Chef Joe and Katy Kindred’s marvel on Main Street, which has earned national attention. (Surely you’ve heard about the magical, pillowy milk bread that kicks off every meal.) The Kindreds, who met in Chicago and eventually moved their family to Davidson, where Joe grew up, have a knack for making fine, chef-driven food a warm, communal, fun experience. Theirs is a place where you can order Wagyu beef tartare that arrives looking like a tapestry — followed by chocolate birthday cake and ice cream. With rainbow sprinkles. 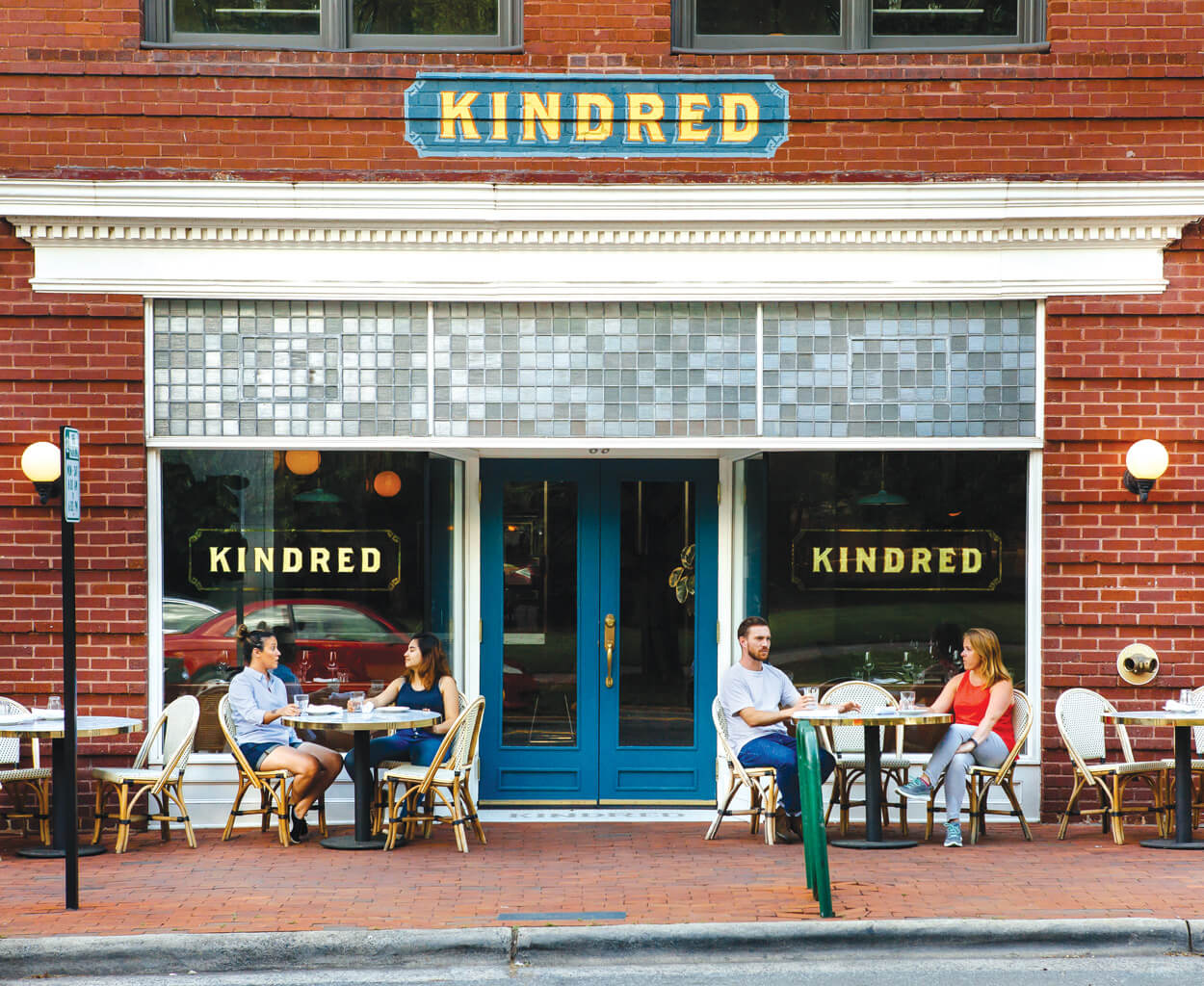 At about 3 p.m., Ian Campbell expects the Cotswold sheep to come around looking for dinner. After a decade at Latta Plantation, he knows this land and these animals, including Maude the mule and Oreo the donkey (below). If there’s woodsmoke in the air, that means Susan Worchester is in the kitchen, baking a pie or Mrs. Latta’s ginger cake on the “swinging crane” fireplace. Long before Lake Norman, settlers like James Latta, an Irish-born merchant and cotton planter, put down roots along the Catawba River. His home still stands, and historical interpreters like Campbell and Worchester immerse visitors in the lifestyle of the Piedmont backcountry — an experience, not just a tour. And that means discussing a diversity of experiences. The interpreters pass on stories of the 33 enslaved people who lived there, like Sukey, who arrived at age 12 and lived to see freedom. 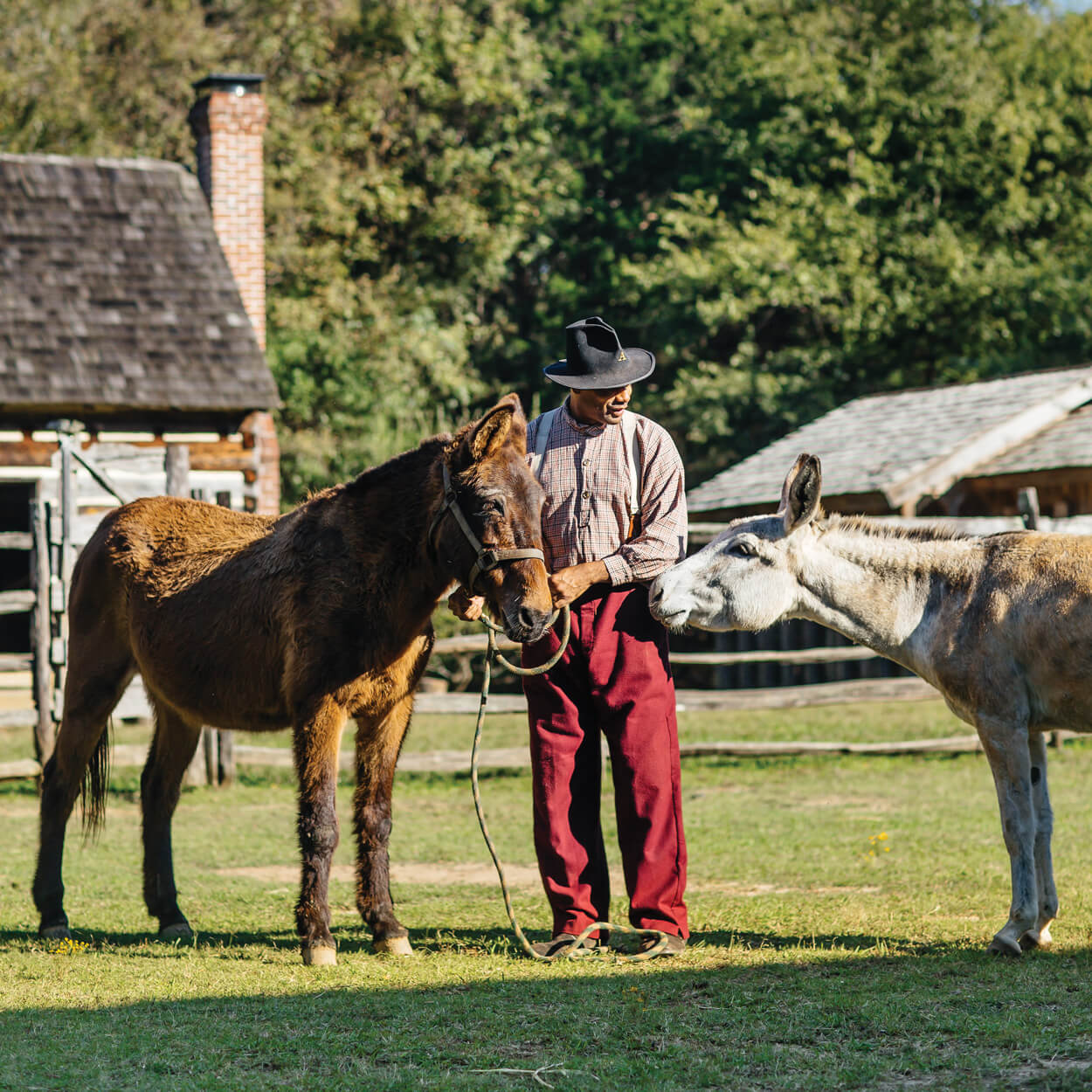 After a decade at Latta Plantation, Ian Campbell knows this land and these animals, including Maude the mule and Oreo the donkey. photograph by Tim Robison

All of the eagles, owls, hawks, vultures, and falcons along the Carolina Raptor Center’s ¾-mile trail share four traits in common: a hooked beak, sharp talons, keen eyesight, and a carnivorous diet. Also, they’re captivating. The vultures, especially, have a devoted fan base: They’re smart and personable, and some of them even “finger paint.” The Raptor Hospital began with a single patient in 1981, when Dr. Dick Brown treated a broad-winged hawk in the basement of the biology building at UNC Charlotte. Now, staff members believe this to be the largest raptor rehab facility in the world. Most summer weekends, birds soar over an audience as part of a flight show, and sometimes there are avian meet-and-greets. The Raptor Center connects people to nature, showing that birds of prey, like all creatures, need our care and protection. 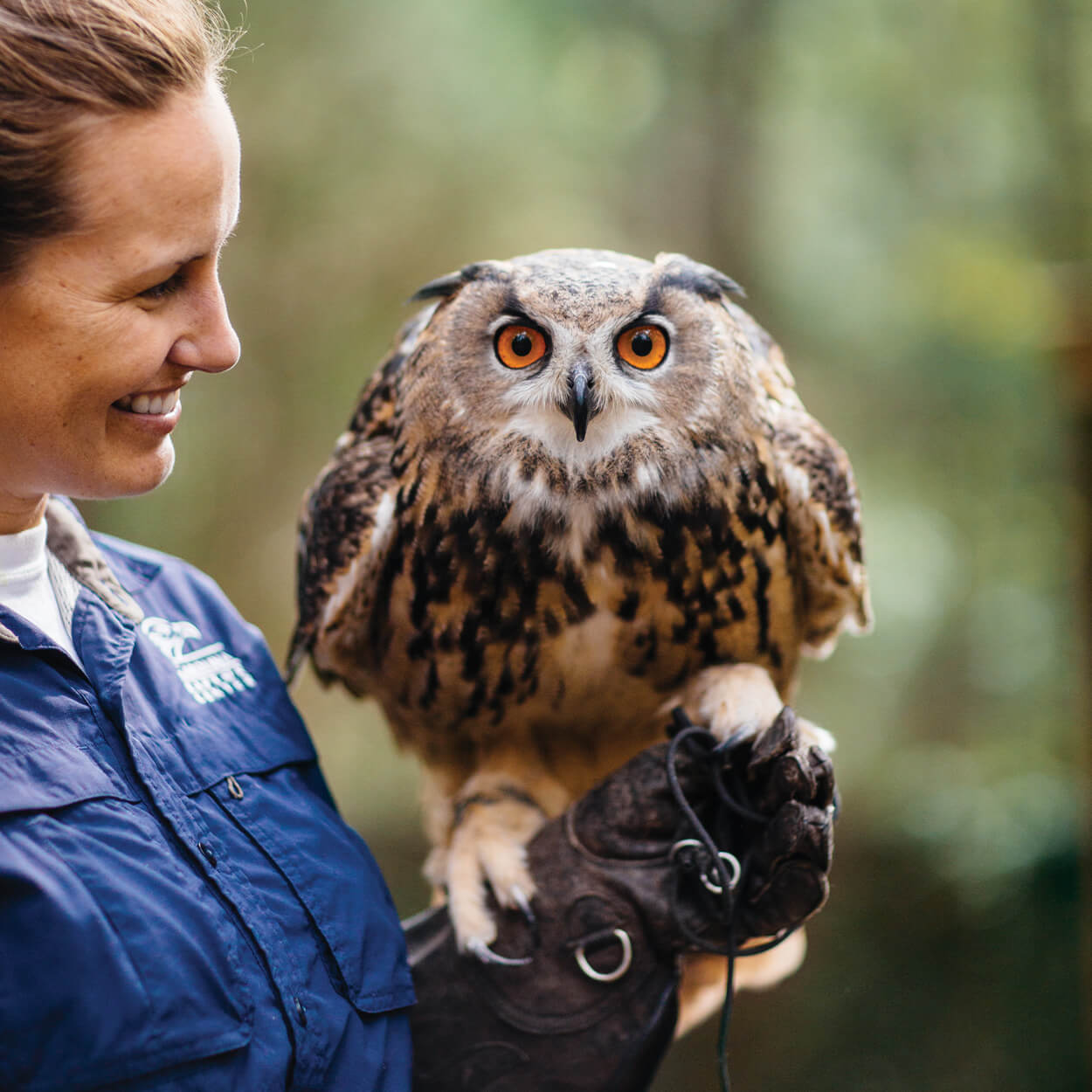 Members of the Raptor Center’s education team — including Kate Shaner, education and program manager, and Black Bart, a Eurasian eagle owl — travel to schools and libraries to spread the word on birds. photograph by Tim Robison

Two years after Joe and Katy Kindred made a splash in Davidson, they opened Hello, Sailor, a waterfront homage to Joe’s childhood on Lake Norman. Growing up, his family ate at Harbor Lights, a restaurant that used to occupy the building. Then, it was a no-frills, fish-camp kind of place. Now, it features stylish mid-century decor, baskets of fried shrimp, bowls of hush puppies, and a beloved fried bologna sandwich. In other words, a menu full of memories. 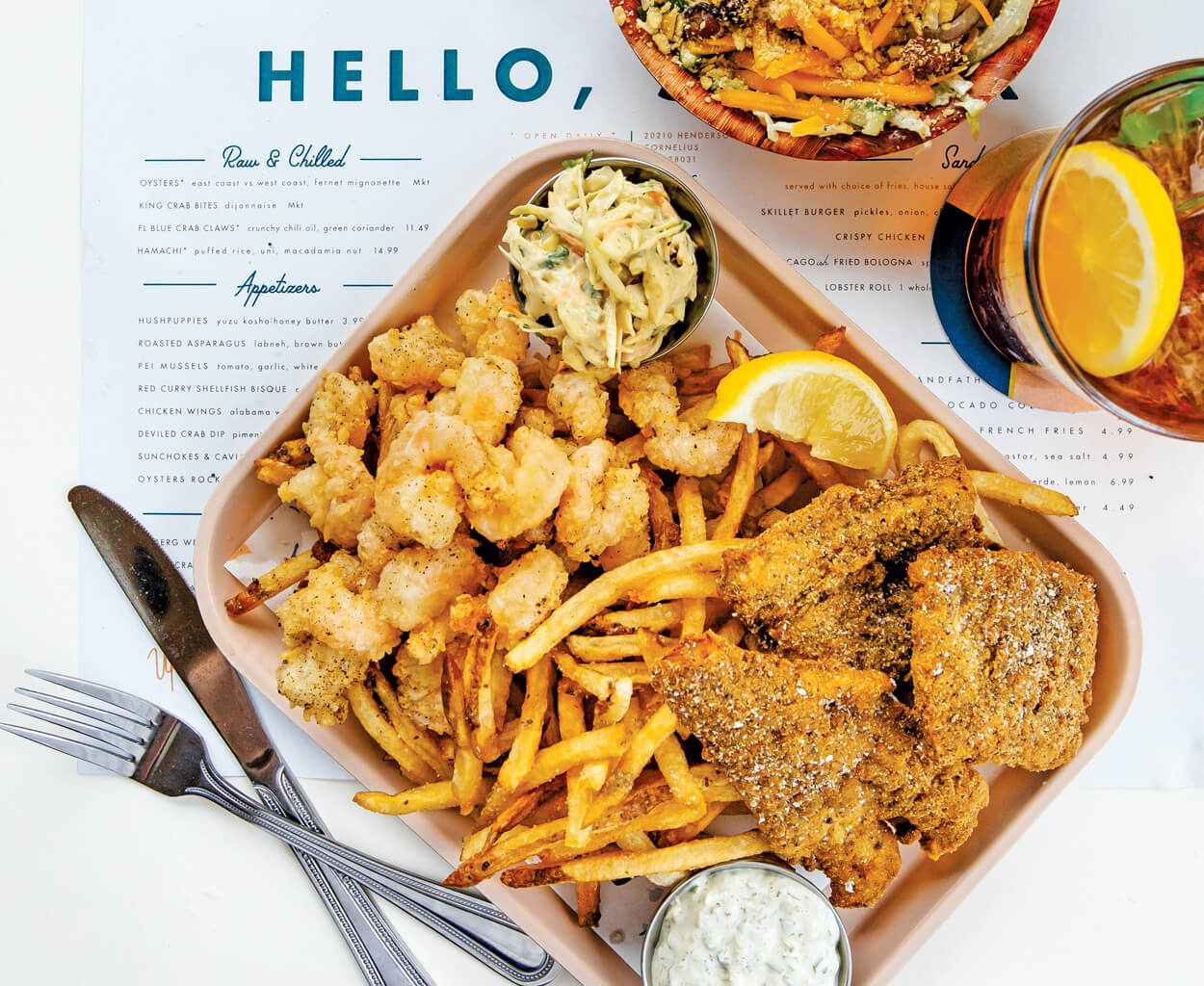 The Kindreds work with Chef Craig Deihl to pair fish-camp classics like salt-and-pepper catfish and Calabash shrimp with updated sides like avocado coleslaw and beef-fat fries. photograph by Tim Robison

D9 is what happens when two engineers and a doctor get into the brewing biz: Beer becomes another path to scientific discovery. That translates into plenty of sour-beer experiments — like the “Systema Naturae” series, in which the brewers explore the natural world through intriguing botanical pairings like scuppernong and lily, or cherry and sunflower. But the taproom is much more community gathering place than mad scientist’s laboratory. D9 may not be on the water, but there’s a certain spirit of lakeside breeziness to its IPAs, like Hakuna Matata (below), and its award-winning cucumber and melon gose, a laid-back summer sipper named — what else? — Brewer’s Day Off. 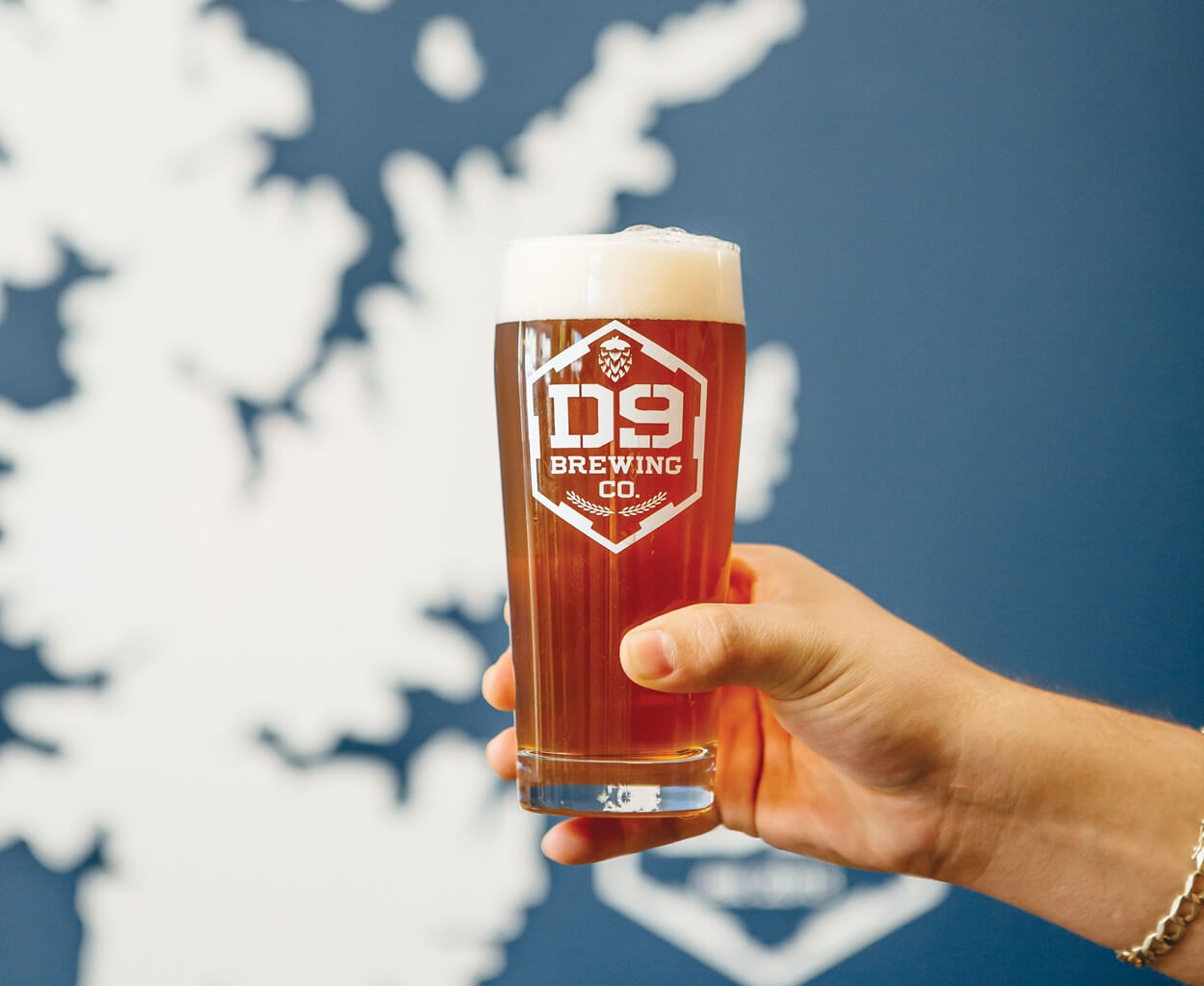 Change has come swiftly to this area once devoted to growing corn and cotton. With big-city neighbor Charlotte to the south, there’s a wellspring of interest in these lakefront communities, and a steady stream of travelers who commute from here or arrive to spend the day. Life is busier, faster, and we might zip right past the wonder of a 32,500-acre lake where there once was farmland. But Lake Norman holds a memory of something simpler in its coves, places where time slows down to picnic, play tennis, walk trails, or sun on the beach. Or just, simply, chill. 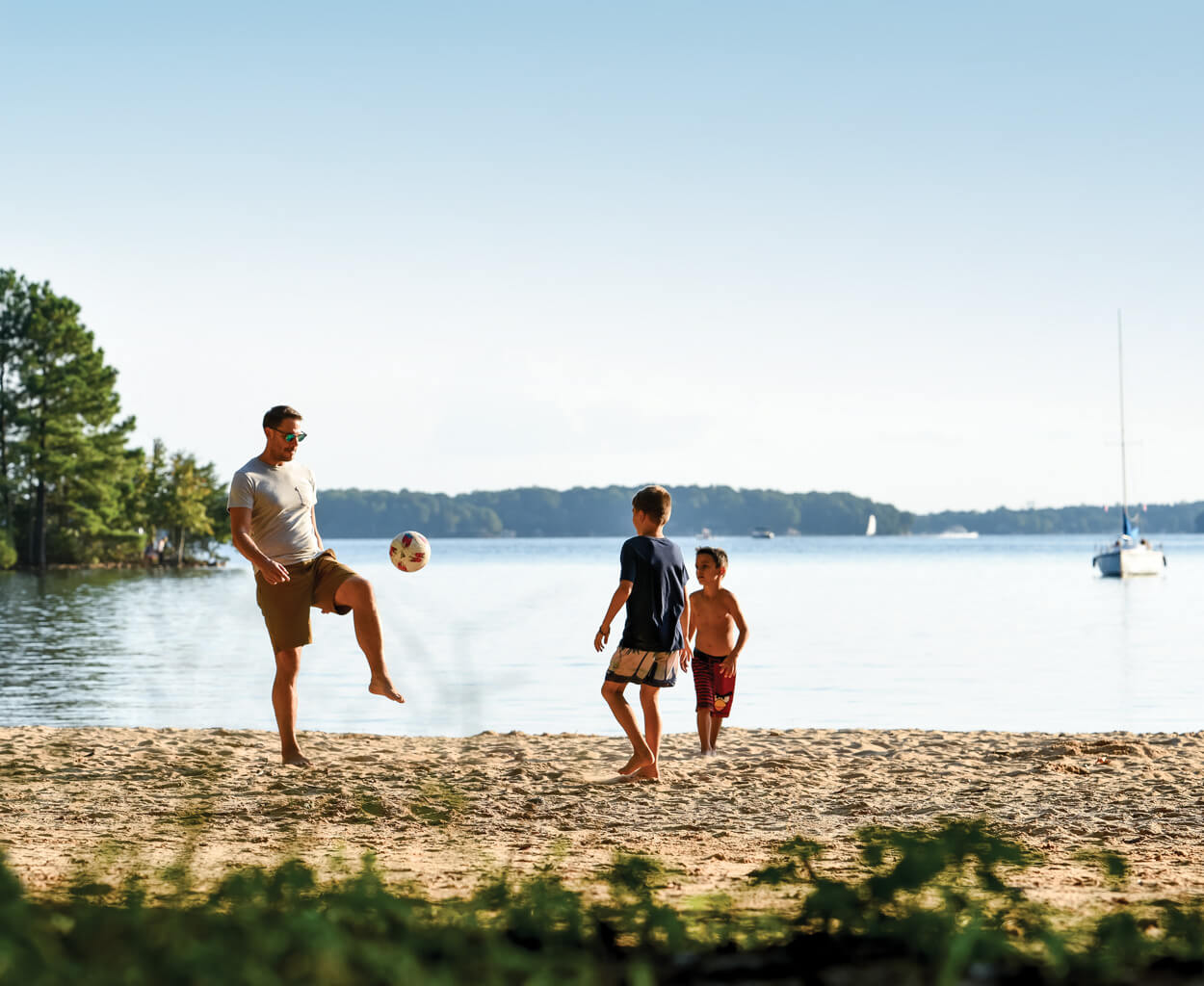 Have some family friend and play a pick-up game of soccer — or just relax by the water. photograph by Brian Gomsak