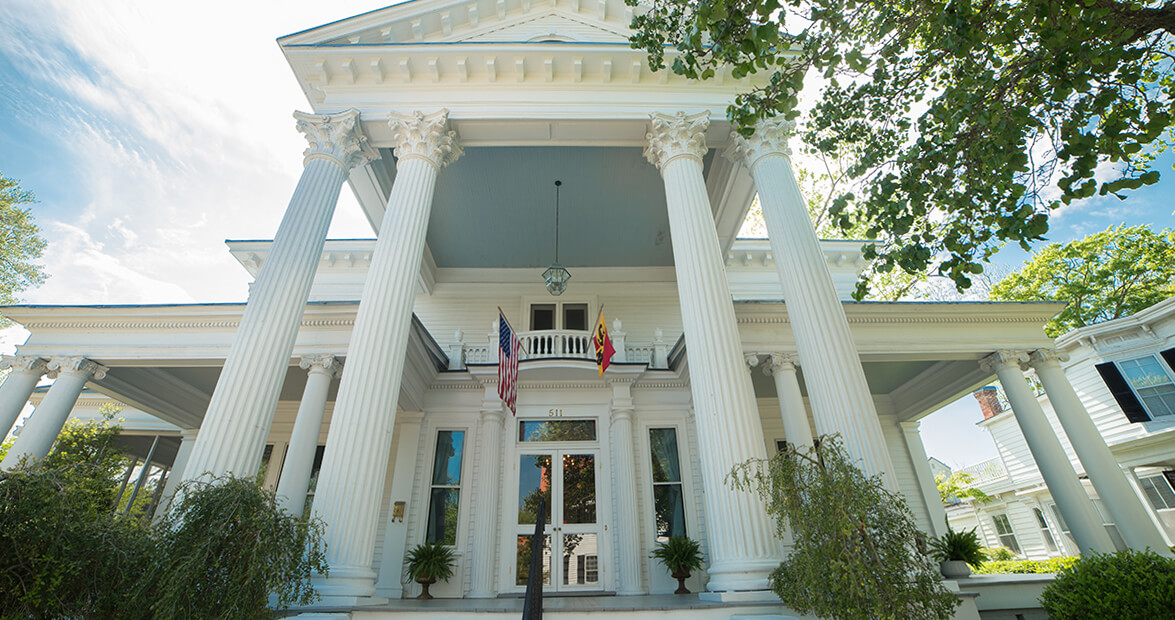 You can tell a lot about a town based on its hardware store. Amid the wrenches and brooms, there’s a microcosm of local life worthy of exploration. At the best hardware stores, the kindness that carries conversation at the counter overflows into everyday existence.

Susan Forbes and her fiancé, Lee Johnson, felt that way when they popped into Mitchell Hardware in New Bern. It was their first visit to the riverside city, yet there was something about the store — and the friendliness of the people inside — that pulled at them to move here.

“When we walked out of the store, we looked at each other and said, ‘A town with a hardware store like this is a town we can live in,’” Forbes recalls.

It might sound like a flight of fantasy to buy a house in a city where you know no one, simply based on a feeling you get from a place where you buy your tools. But good stories often start someplace unexpected — someplace unknown.

“We had decided prior to that, that we were going to have an adventure,” Johnson says. “We had not decided what that was.” 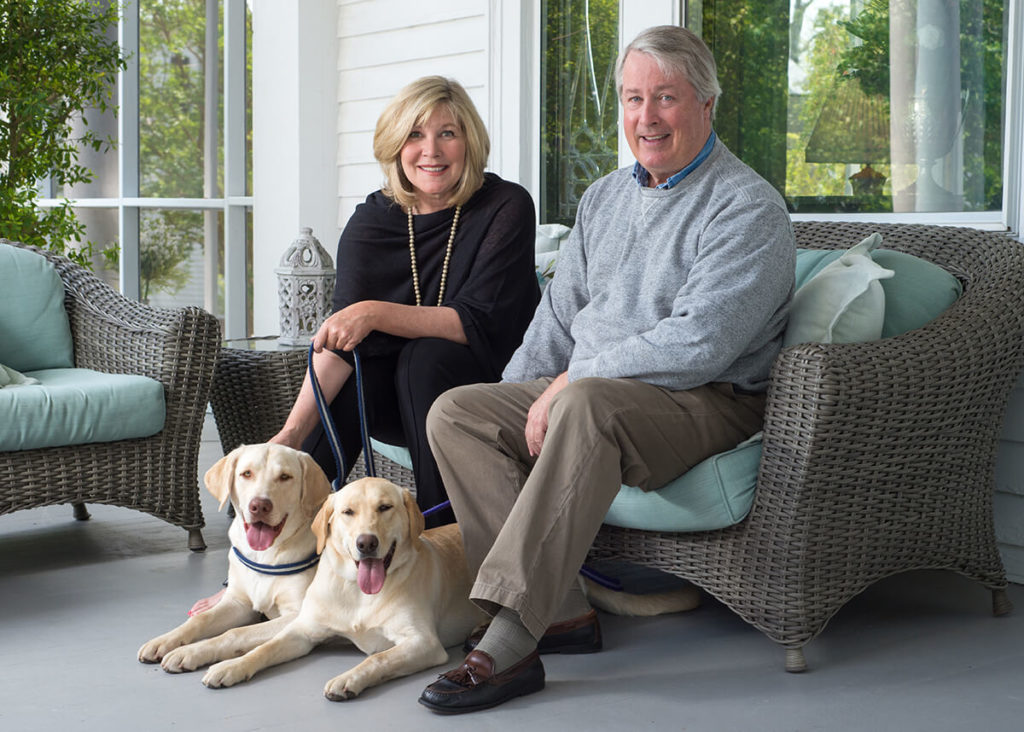 Before they visited, they had scoured the web for historic homes along the east coast and even looked at some old chateaus in France.

But New Bern’s conviviality spoke to the couple’s small-city roots. Forbes grew up in Williamsburg, Virginia, and Johnson was raised on the Inner Banks in Washington. But as media consultants, they made a home out of that other Washington — D.C., that is.

At first, Forbes and Johnson simply saw New Bern as a place where they could escape to on weekends. But rather suddenly, it became something more: home.

Forbes knew it shortly after they had moved into the Larry I. Moore House, located on East Front Street. She was raking leaves in the yard and stepped inside to take a phone call from her mom. When she returned, she discovered that an anonymous do-gooder had put the remaining leaves into bags and tenderly lined up the garden equipment next to the front door.

“There was no note. No one stopped by to say, ‘Oh, we pitched in,’” Forbes says. “To this day, we do not know who finished raking our leaves.”

They’ve gotten to enjoy the perks of Southern hospitality a lot more these days. New Bern has become their primary residence since Johnson became the executive director of Tryon Palace, which served as the first capitol of North Carolina, in October.

Forbes and Johnson’s love of history runs deep, so it’s no coincidence that New Bern — and the couple’s home — is steeped in it. Stately Corinthian columns that accent the front porch hint at a bygone era of craftsmanship. Inside, eclectic family heirlooms and auction finds line the walls and fill the crannies. French cavalry helmets, marble busts, and oil paintings span the centuries and speak to the mutability of time and place. 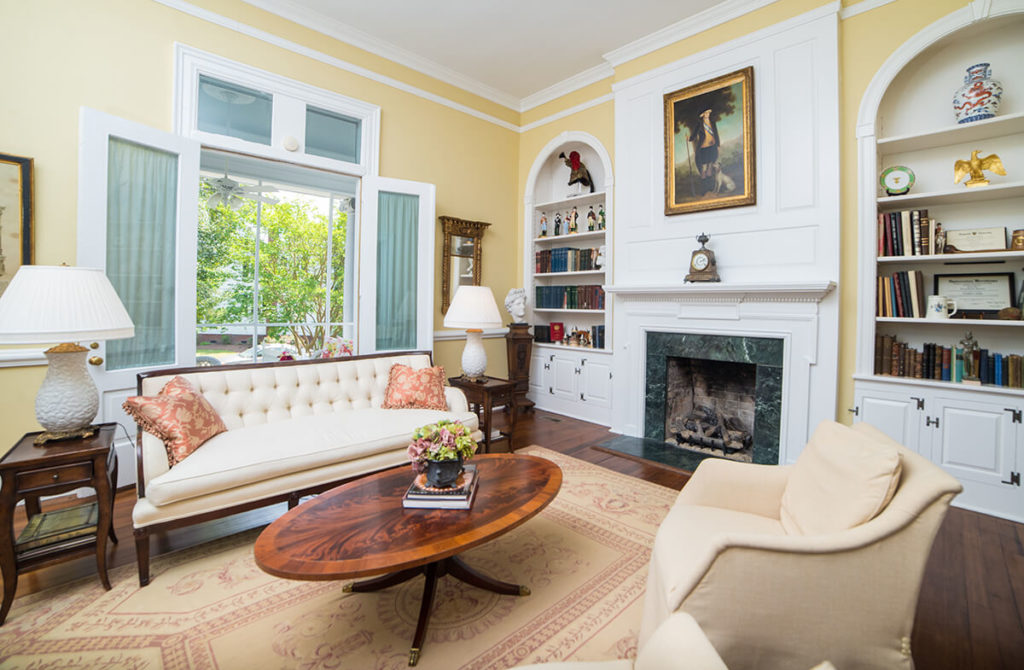 One of the Larry I. Moore House’s sitting rooms, with plenty of historical touches. photograph by Zach Frailey

But history would mean so little without the stories it yields, and this house has got a lot of them.

“We’ll tend to hear little anecdotes, stories,” Johnson says. “Not so much about the features of the house, but of the people who lived here and things they used to do.”

Among mention of structural updates, old house records include a few Easter eggs.

Built in 1908, it was first home to Larry I. Moore, a prominent local attorney. He lived in and loved this house for four decades, and when he died, his service was held right in the foyer.

Moore’s wife once hosted an elaborate ladies bridge party on Valentine’s Day. Dozens of women would sit around card tables scattered throughout the house. In between games, they’d break for salad and ice cream.

Some of the best stories Johnson and Forbes hear are the ones told aloud by those who personally watched them unfold. Two neighbors, who are lifelong New Bern residents, will recount carefree days spent playing in the house’s basement and yard.

Johnson and Forbes hope that spending more time here means that they’ll have stories of their own to tell. In a city where the characters are as colorful as the sunrises over the Neuse, that shouldn’t be hard to accomplish. All they need to do is step out on their front porch.

That’s exactly what they did when a weakening Hurricane Joaquin passed through in 2015.

“To give you an idea of the temperament of New Bern,” Forbes sets the scene, “water is coming up, it’s just before high tide, and you hear this angelic opera down the street.”

When they walked outside, they discovered their neighbor singing “’O Sole Mio” at the top of his lungs, paddling his kayak up and down the flooded street. The spectacle became a moment of community bonding as others joined in.

“In this little part of the world, people took that experience and tried to make something good,” Johnson says.

It was one for the books.

All stories have to start somewhere. A hardware store is as good a place as any.