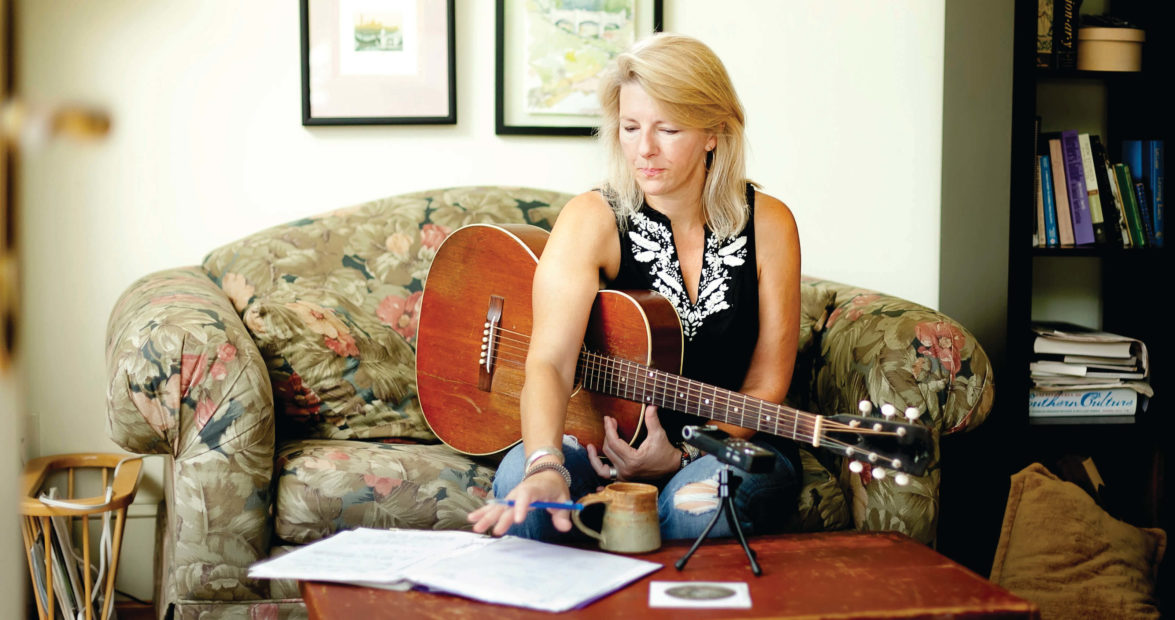 Laurelyn Dossett spots them in her backyard near the purple hydrangeas.

It’s a weekday morning. Laurelyn would love more sleep. She’s curled up in a big chair, her bare feet tucked beneath her, when she looks outside her music-room window, past her guitar, banjo, and upright bass, and just sighs.

She’d like nothing better than to get dirty and pull them. But she can’t. She’s too busy.

And now, she’s getting ready to work with the North Carolina Symphony — again.

Last year, she joined the symphony on a six-city swing through the Carolinas. She sang “Remember My Name,” her tune from Triad Stage’s Bloody Blackbeard, as part of a tour featuring music from the Carolina coast.

But this time, she’s the show, no supporting cast. She’ll write a series of tunes, and it’ll all be scored for an orchestra and performed next year a week after Thanksgiving in Raleigh.

And she’ll sing in that voice, that crystalline, heart-tug of a voice that still makes people weep.
Dossett will turn 50 in February. But she’s just getting started.

Fifteen years ago, she was a stay-at-home mother in Pleasant Garden. She’d sit barefooted on her front porch, her guitar across her lap, and she’d sing tunes from Gillian Welch as she’d wait for her girls to step off the school bus.

And, after putting her career on hold to raise three daughters, look where she is now.

Dossett writes about our South and our dance with religion and nature, love and loss. It’s something we all recognize.

She knows that kind of terrain well. She was born in Alabama and ended up in Pennsylvania, the oldest of four, the only daughter of a pediatrician dad and a stay-at-home mom.

Her parents helped start an evangelical church in their living room, and Dossett eavesdropped at the top of the stairs and heard people talk in tongues. Along the way, her Bible became part of her vocabulary, and her church pew became the spot where she always sang the loudest.

Today, Dossett keeps religion at arm’s length. In her songs, she’s more likely to ask questions and write about emotions that’ll give you a lump in your throat. It’s all culled from her own research as well as her own experiences of singing for friends and family edging toward death’s door.

As Dossett likes to say, it’s just three chords and the truth.

“Why not find some new way of connecting with people, of connecting the dots,’’ she says from her music room in Greensboro. “If you’re not going to do something real, why bother? We don’t need any more bad, shallow songs.’’

Dossett’s voice quickens, more question marks come, and she starts firing off her favorite phrase, “You know what I mean?” When that happens, you know one thing: She’s just getting started.

“It’s not that different from a painter or a novelist because you’re trying to make people feel something or be more connected with themselves or each other. So, you find stories or metaphors that’ll do that.

“The goal is not to make someone gratuitously cry, but we move at such a fast pace. You know what I mean? It’s loss and love, birth and death. All those things are huge. And you find ways to write about those things.

“Those things are real, but it’s not for everybody, and everybody doesn’t like this stuff. There are great pop songs, but let someone else write them.”

Dossett stops, looks out her back window in Greensboro’s Westerwood neighborhood, and her mind races back to the present, back to something she thought about a few minutes before.

“Look at those weeds I’ve got to pull.”

Songs for the South

Hush now, don’t you wake up
We’ll be leaving at first light
Mama’s buying you a mockingbird
To lull you through the night
We’ll cross the Dan by morning
Here’s a blanket for you to share
They’re building down in Georgia
Daddy hears he’ll find work there.
— “Leaving Eden’’

It was six years ago when Dossett sang “Leaving Eden” at a church fellowship hall in Winston-Salem. It was the title cut from the second CD by her roots music group, Polecat Creek.

Her song is about Pillowtex Corporation, a bedding company that folded in 2003, causing the largest mass job loss ever in North Carolina — more than 4,800 jobs across the state, including 450 in the Rockingham County town of Eden.

But really, her song is about a young mother leaving her family, her town, and everything she knows to find work elsewhere.

After she sang it at that Winston-Salem church, Dossett spotted a woman in the front row. She was in her 70s. The woman told Dossett she had worked at Pillowtex her whole life.

“Did I get it right?” she asked the woman. “Is this accurate?”

That tune caught the attention of BBC Radio — and Preston Lane, the artistic director of Triad Stage. He realized he found a partner.

She writes the music; he writes the scenes. And today, they have become what some call the “Rodgers and Hammerstein of Appalachia.’’

Together, they see onstage a South grounded in theology, stories, and music.

Their partnership created some of the biggest moneymakers at Triad Stage: Brother Wolf, Beautiful Star: An Appalachian Nativity, Bloody Blackbeard, and this summer’s Providence Gap.

And it has pushed Dossett.

She learned to play the banjo and read music, and she’d hum melodies and recite lyrics into a digital voice recorder while waiting in a car pool line to pick up one of her daughters. And she’s begun to understand the need to get away — from the laundry, the air-conditioner repairman, and her backyard weeds.

She’s hunkered down in quiet spots in the mountains and along the coast, with only her guitar, her notebooks, and her armloads of research — everything from a rhyming dictionary to her Encyclopedia of Southern Culture.

She honed her craft. In turn, she’s become a songwriter people say they can’t forget.

“You will find hardly anyone who has the muse sitting with them more than Laurelyn,” says Joe Newberry, the public information officer for the North Carolina Department of Cultural Resources and the person who introduced the N.C. Symphony to Dossett. “The music is always there, and she just reaches up and pulls it down, and it’s just beautiful. It’s a song that comes from the heart.’’

The road I’m on’s a rocky uphill climb
That old straight and narrow path I never did find
No bread from heaven, no honey running from stone
No shining angels, no flashes of light
Just plain old believing, and trying to live right
No shining angels, and no light to show me home.
Come by, Lord, won’t you come by here.
— “Come By Here’’

When Jim Dossett answers his phone, he knows who it is immediately.

“Hey, it’s me,” Laurelyn says to her youngest brother. “I’m working on a song. You wanna hear it?”

She sings. Right there on the phone. Jim loves that.

“I just see the amazement and wonder in her. … [It’s] like, ‘I wonder how all this happened?’” he says. “People are
surprised and not surprised at all. At least the ones that know her. It’s a given. That talent was always there, waiting for the appropriate environment to come along.

“Moving to where she is now and being immersed in that [North Carolina] culture hit a nerve, but maybe she would’ve done this anywhere. She and Justin could have moved to Italy, and she would’ve been writing folk songs in Italian. Who knows?”

Justin is Justin Catanoso, an award-winning journalist and Laurelyn’s husband.

“She doesn’t play by any rules,” Catanoso says. “She has lived by this faith that ‘If I put it out there and connect with good people, opportunities will arise.’”

One of those opportunities came just by planting flowers and singing to her daughters in her yard in Winston-Salem two decades ago. Her next-door neighbor at the time was classical music composer Ken Frazelle.

Years later, Frazelle wrote “Songs In The Rear View Mirror” just for Dossett. They performed it together this year at Winston-Salem’s Reynolda House Museum of American Art.

Another prominent musician, Levon Helm, the legendary drummer and singer of The Band, found Dossett through his producer, Larry Campbell.

Campbell saw Dossett do a staged reading of Brother Wolf in New York City. At intermission, Campbell found Dossett in a stairwell as she headed toward the bathroom. He asked about “Anna Lee.”

Dossett originally called the tune “Rosalie.” But she felt weird killing off a character named after her middle daughter. So, out of the blue, she picked the name Anna Lee. It was a name she came up with in a carpool line at Greensboro’s Kiser Middle School. But it also was the name of Helm’s longtime friend, whom he included in “The Weight,” one of The Band’s most popular tunes.

Helm put “Anna Lee” on his CD, Dirt Farmer. Two years ago, he won a Grammy for best traditional folk album. He later met Dossett at his house in Woodstock, New York — in his pajamas and light-blue bathrobe.

“This little lady wrote that beautiful song that sounds 300 years old,” Helm told a crowd of people in his recognizable, broken-bottle voice.

Last spring, at a hotel pool in Hilton Head, South Carolina, Dossett joined her new musician friends with the N.C. Symphony tour after a performance. Like she did years before in Pleasant Garden, she pulled out her guitar and played.

It was a Thursday night, near midnight. Among the poolside crew was Scott Freck, the vice president of artistic operations with the N.C. Symphony. As he listened, he realized something quick: “This is someone special.”

“Boy, Laurelyn,” he told her, “you know we’ve got to do more together.”

They will, next year.

She kissed her two babies on cheek and on brow
And she left them with nary a care
The wind it did rise and the rain it did fall
The river was a shadowy wave
Anna Lee never heard danger’s dark call
And was swept to her watery grave
I’ll return to you, dear, in the dimming of the day
As the sparrow returns to her nest
I’ll return to your dreaming with each lullaby
Hold your sweet weary head to my breast
— “Anna Lee”

There was a time when Dossett’s daughters were a bit cynical about their mom’s musical career. They loved poking at her, like kids do. But now they are nearly grown — 22, 20, and 17 — and they’ve grown into themselves and grown to understand the importance of their mom’s creative pursuits.

Sometimes, they’ve even had to reassure her, especially when they’ve heard her say, “I’m sorry I’m such a weird mom.”

Emilia Catanoso, Dossett’s oldest daughter, has run into that.

“She has taken all these opportunities she’s been given and molded it into the life she already had with us, so it wouldn’t be this strange sort of foreign thing in our lives,” says Emilia, 22, a rising senior at the University of North Carolina at Greensboro. “She fits it all in, and all of those things have become a part of our lives as well as hers.”

This summer, Emilia first saw Providence Gap during a run-through at Triad Stage. After the rehearsal, on the third floor of Triad Stage, her mother found her.

Emilia didn’t respond. She couldn’t. At least not yet. She knew her mom had written “House On A Hill,” a tune from Providence Gap, about waiting for her to be born.

Emilia fell into her mom’s arms and cried. Dossett cried, too. Neither said a word.