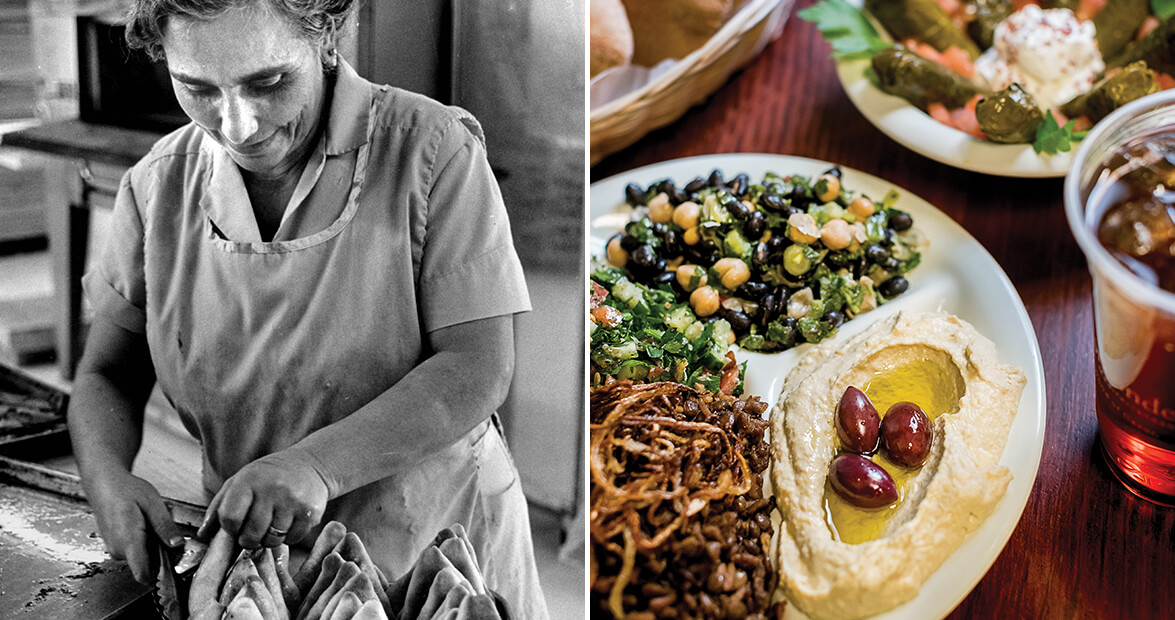 Nearly a year had passed since the Saleh family arrived in Raleigh after fleeing Lebanon in 1976, during the country’s civil war. They had rented space for a bakery and were awaiting equipment that could make a standout French baguette — a bit of European flair they hoped would set their shop apart. But the oven never arrived. Fate nudged them in a different direction.

To get their business going, the Salehs settled for a modified pizza oven, and instead of baguettes, they made what they knew: pita bread. The recipe was one of the treasures that family matriarch Cecilia Saleh carried with her when she and most of her family cast off into the Mediterranean Sea on a small, overcrowded boat. A storm tormented their vessel, and when they finally reached Cyprus, Cecilia’s brother, Moussa Doumit, then director of the North Carolina Museum of Art and the family’s sponsor, was there to bring them to North Carolina.

Like the thousands of other Lebanese immigrants who have come to the state over the past century, the Salehs prayed to find safety, opportunity, and a new beginning. Many who made the journey arrived with almost nothing. Ingenuity, determination, and salesmanship were the currency they used to launch businesses that have boosted our economy and enriched our culture. 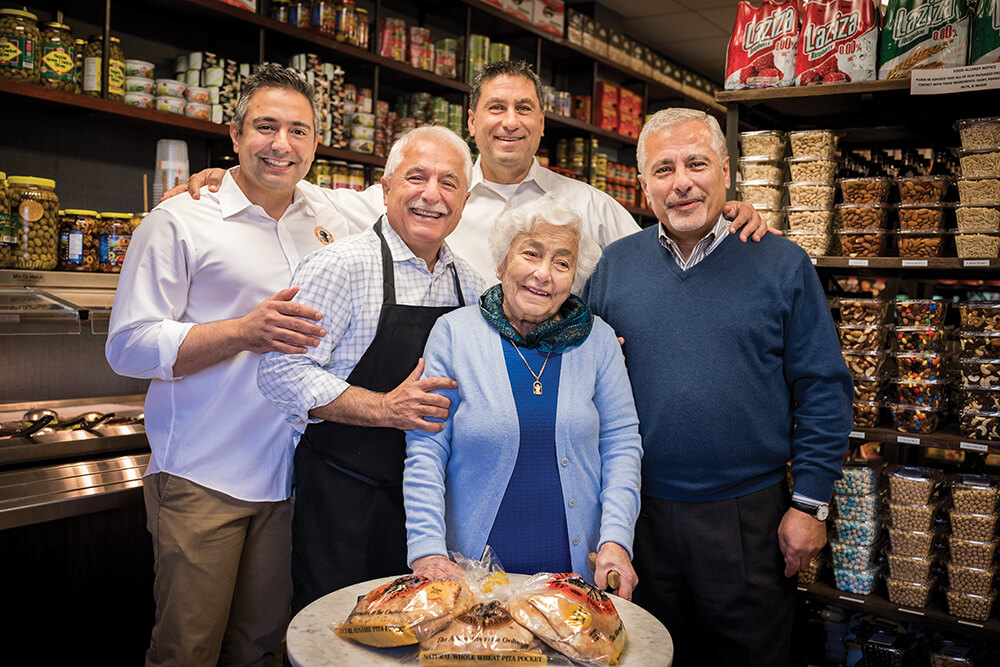 From left: Cecilia Saleh’s grandson Chris, and sons Sam, DeGaulle, and Joe join Cecilia and her famous pita bread. (In this story’s feature image, you will see a younger Cecilia Saleh arranging spinach pies at the original Neomonde location.) photograph by Charles Harris

When the Salehs opened Neomonde Baking Company in 1977, proudly featuring Cecilia’s pita bread, they created a destination to delight worldly types in Raleigh, not to mention new arrivals from the Middle East who were hungry for a taste of home. “In our lifestyle, bread is the masterpiece on the table,” says Joe Saleh, one of Cecilia’s sons, who helped start the business and now heads the bakery operation. “It’s the main ingredient.”

Eventually, the bakery grew to include an adjoining market and a deli-style Middle Eastern restaurant. In the early years, the family gathered on Friday and Saturday nights and on Sundays after church. “It was glorious family time — eating, laughing, and dancing,” recalls Mounir Saleh, another of Cecilia’s six children.

Now Neomonde’s bakery produces more than 250 types of bread — including French baguettes — and Mounir’s spinoff Sassool restaurants in Raleigh and Cary also serve traditional Lebanese dishes. “The legacy is the goal,” says Mounir, reflecting on one of the principles of Lebanese tradition. “Did I leave my children better off? Did I leave my community better off? That is what I live by.”

Dreams of a better life for their children guided hundreds of thousands of people out of Lebanon in an early exodus between 1880 and 1920. Political upheaval and economic factors, including a dwindling silk industry, pushed them toward the Americas, Australia, and Africa. In North Carolina, nearly 1,400 people of Lebanese descent were counted in the U.S. Census in 1920. 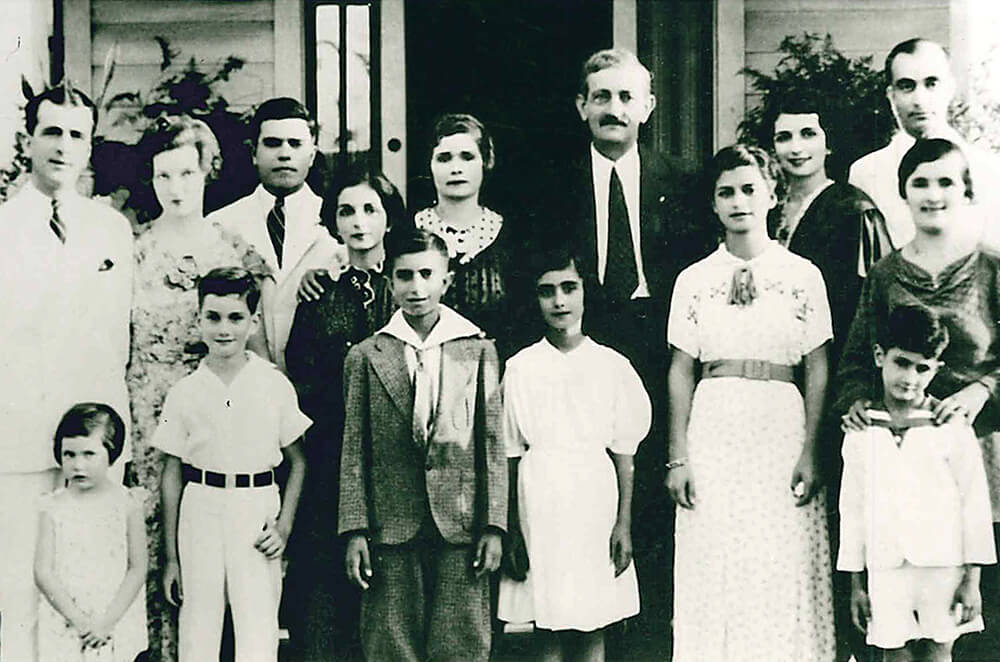 Shikrey Baddour (third from the right) poses with family at his home on Chestnut Street in Goldsboro in 1936. The house was purchased with funds from the sale of Mt. Olive Pickle stock. photograph by The Baddour Family

Shikrey Baddour, one of these early Lebanese immigrants, quickly discovered when he arrived here in the early 1890s that the streets were not paved in gold, as lore had promised. Yet the stories of abundance and opportunity ultimately proved true for Baddour and his family. By 1924 — nine years after he arrived in Goldsboro — he was already running a shirt factory.

“Without Mt. Olive Pickle, you might have to roll the sidewalks up.”

One day, on a drive through Mount Olive, he saw farms where cucumbers were rotting in the fields. Always on the lookout for business opportunities, Baddour was inspired to turn the surplus crop into profit. With the help of 36 other shareholders, he started Mt. Olive Pickle Company in 1926. Today, it’s the nation’s largest privately held pickle company, with one million square feet of production and warehouse space on 150 acres in Mount Olive. Even though Baddour left the business years before his death in 1938, the homegrown industry he started continues as one of Wayne County’s largest employers — providing more than 600 jobs.

“Without Mt. Olive Pickle, you might have to roll the sidewalks up,” says Charles Brown, town manager. “Mt. Olive Pickle is what keeps Mount Olive going.” 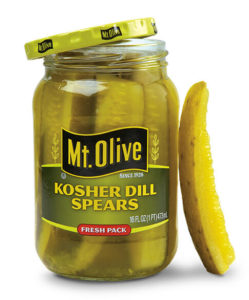 The Baddour family also has a more personal legacy, tied to the Lebanese tradition of serving the community: Shikrey Baddour’s son, Philip Baddour Sr., served on the Goldsboro City Council for 16 years, and his grandson, Goldsboro attorney Philip Baddour Jr., served in the North Carolina House of Representatives. Another grandson, Richard “Dickie” Baddour, was the athletic director at UNC-Chapel Hill, and great-grandson Allen Baddour serves as a superior court judge. “My family loved this state and always wanted to give to the community,” Philip Baddour Jr. says. “I grew up with that.”

The lessons were similar for Raleigh real-estate developer Greg Hatem. As he strolls the Moore Square historic district, watching folks duck into coffee shops and bars, storefronts that 20 years ago would have been vacant, he sees a community transformed. Hatem has renovated 40 commercial buildings through Empire Properties, the company he founded in 1995, at a time when businesses had given up on downtown and moved to the suburbs.

“More than any other private developer, Greg Hatem brought downtown Raleigh back to life,” says Charles Meeker, Raleigh’s former mayor. “In 2001, half the storefronts were closed on the Fayetteville Street Mall. There was virtually no activity downtown.”

Hatem says the values passed down from his Lebanese-born grandmother inspired him to invest in downtown Raleigh when few others would. Hatem’s sitti, a Lebanese-Arabic word for grandmother, taught him that serving family and community would bring him purpose and honor. “We do things for our family for generations to come,” Hatem says. “What we do in the community, it’s not about what we can take. It’s what we can give.” 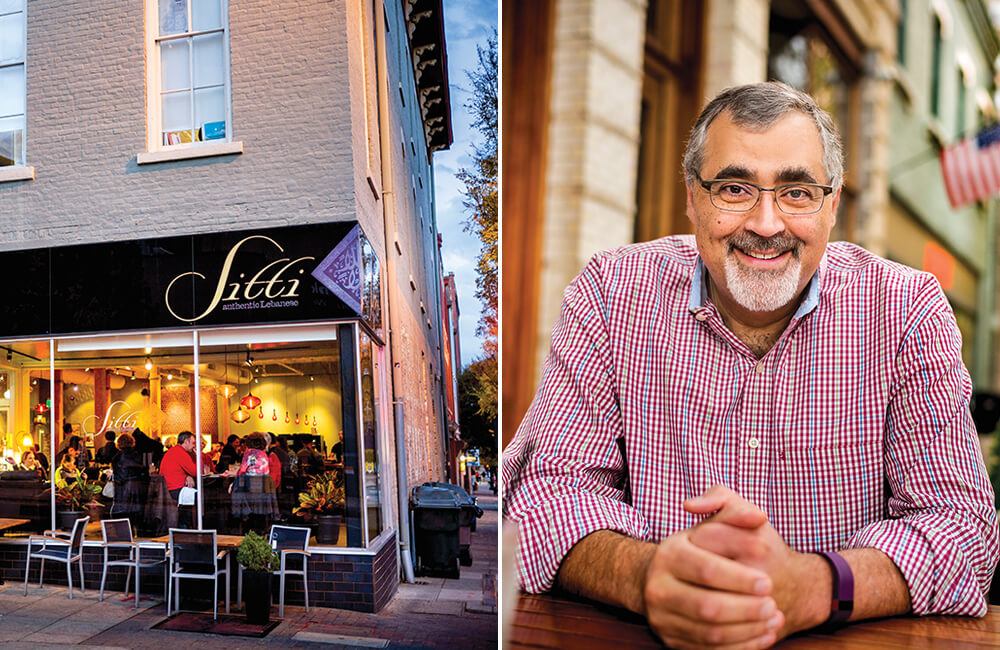 In 2008, in partnership with the Saleh family, Hatem opened Sitti restaurant, a block from the State Capitol. “So many of our sittis are gone,” he says. “That’s where so much of our heritage comes from. They were the ones who showed us our culture through food and faith.” Five North Carolina governors have dined at Sitti — Jim Hunt, Mike Easley, Bev Perdue, Pat McCrory, and Roy Cooper — sharing a Lebanese tradition of hospitality that also feels, well, Southern.

That’s because the cultures are very much alike, says Hatem, who grew up in Roanoke Rapids and travels to his ancestral home in Lebanon every few years. “They are very much driven by family, by education, by culture and faith. I couldn’t figure out what part of me was Southern and what part was Lebanese.”

Alex Lee, Inc., employs tens of thousands of workers through several enterprises, including Lowes Foods supermarkets. The commitment to building a strong community through job creation has continued for four generations, starting with Moses George. He was a teenager, just 16 or 17, when he came to Charlotte around 1904, sponsored by a family from his village in Lebanon.

By 1923, George and several partners had started a wholesale business: the Shelby Candy Kitchen and Carolina Fruit & Produce. It was a successful venture, even though George never learned to read or write in English. He decided his sons, Alex and Lee George, would do better. In 1931, the same year that Alex graduated from Duke University, Moses bought his sons a business called Merchants Produce Company.

Eighty-five years later, Alex Lee, based in Hickory, employs roughly 10,000 people. It’s the parent company of Lowes Foods, LLC, which has nearly 100 locations in the Carolinas and Virginia, and Merchants Distributors, which distributes food and other products to supermarkets. Moses George’s descendants continue to take an active role in the business: Boyd George, a grandson, is chairman of Alex Lee, and Brian George, a great-grandson, is president and CEO.

While food and agriculture businesses are common in the stories of many Lebanese immigrants, these are secondary to the George family’s accomplishments, says Kimberly George, vice president of communications and corporate citizenship at Alex Lee. She attributes the family’s success to an entrepreneurial spirit and talent for salesmanship. “I see that determination to always better yourself and to have a better life,” she says. “We definitely saw that in our Lebanese ancestors.”

Each generation of the George family has tried to carry on Moses’s ideals. “Even back to my grandparents and great-grandfather, they all felt a responsibility to give back,” Kimberly says. “I think that’s part of the culture in the villages where they came from. The families take care of each other.”