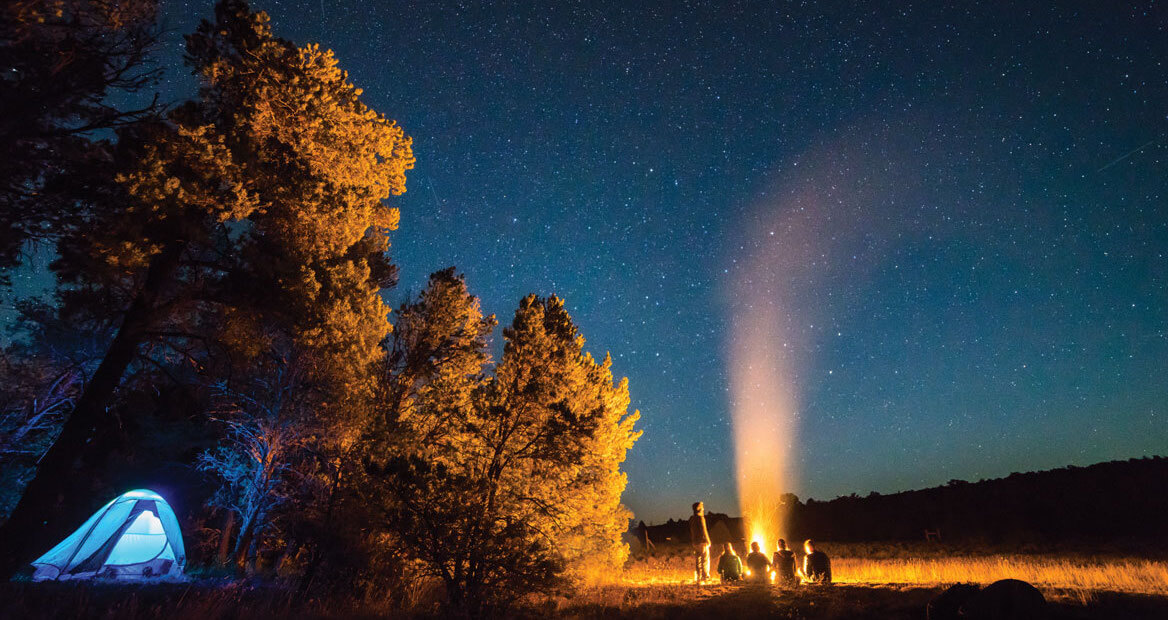 North Carolina’s state parks are packed with opportunities: for adventure and leisure, recreation and education. Check out our Guide to NC State Parks.

We don’t have to spark flint and steel into tinder, and we don’t have to use a spindle and fireboard — though both are plenty impressive. All we know for sure is that we definitely can’t light a fire the way I did the last time I had the kids in the mountains, which was to make a haphazard pile of half-green sticks, douse them with lighter fluid, toss a match in the general vicinity, and whoomp: fire. That’s cheating. There’s no joy in it whatsoever. That method is reserved for acute domestic emergencies, such as an overly optimistic s’mores promise colliding with a clock that’s already raced well past bedtime.

Real fires don’t go whoomp. Real fires require technique and planning and architecture. Real fires require somebody — me, 13 years old, Boy Scout campout; me, 24 years old, trying to impress my now-spouse — on his hands and knees, blowing gently into some dry pine straw and wood shavings and a tiny, careful pyramid of pencil-size deadfall, hoping against hope that it’ll catch.

I text my father: Aren’t you the teller of a Boy Scout tale about lighting a fire in the pouring rain? My phone rings three minutes later. This is a gift I’ve given him, the chance to tell the Legend of Lewis Lechleiter one more time: a boy who, like all Scouts in my dad’s troop who wanted to progress from Tenderfoot to Second Class, had to light a fire and keep it going for half an hour — using no more than two matches. Every time my father tells this story, it’s raining ever harder; every time, Lewis’s fire grows taller. This time: “Lewis’s fire was almost as tall as he was,” my father says. “Sheets of rain. We were in awe. And then,” he says, and I can hear the smile spreading across his face, “he walked across the campsite.” I say it with him: And handed Mr. Stifler, the Scoutmaster, the other match.

Dishes I have achieved while cooking over a proper fire: apple cobbler in a cast-iron Dutch oven. Aluminum-foil-packet potatoes. Kebabs. Monster steaks. Lacy eggs. Coffee. Just-caught fish. Hot dogs on a stick. I know someone who has cooked squirrel, but I am not that brave. If I knew what I was doing, I could hike up into wherever ramps are and gently wilt them in a camp skillet over some low coals, but I don’t know what I’m doing. I can make a fire that makes low coals, but I don’t know a ramp, sadly, from much of anything else on a mountainside.

I can remember winding through the woods to a secret clearing at Camp Kanuga, just outside of Hendersonville, can remember the luminaries lighting the path, the heat of the flames of that campfire. Or have I gotten that mixed up with the grad-school-era bonfire down near Climax and Julian? Back before we had kids, my wife and I built a little fire at the bend of the New River just inside the state line. Then we walked up to the A-frame we were renting, built another fire in the huge stone-and-brick fireplace inside. Store-bought fire bowls in Greensboro backyards; dug-out pits in dry sand at Atlantic Beach or Topsail, if that was even legal. Memory flickers like flame.

We can go with either teepee or log cabin (and there are other “lays,” like star and lean-to, but we needn’t get fancy in order to get it right), and both succeed in approximately the same way: You build a tiny fire inside a larger structure, and the flames grow from within. Essential: dry leaf matter, wee twigs, maybe a stick or two that you’ve whittled into curls. Don’t pack it too tightly. A fire wants air, wants space. If it’s dry out, gather dry wood; if it’s “raining to beat the band,” as my father says it was in 1957, then you’ll need to cull branches from standing dead trees. Gather your wood first, friends, enough for what you believe will be an hour’s worth. You do not want to have to go jogging all over the woods looking for fuel at the same time as you need to be fiddling with the fire. Fiddling is key. Even an expert will hunch over, move a small stick or two around, talk to the fire in its early stages. 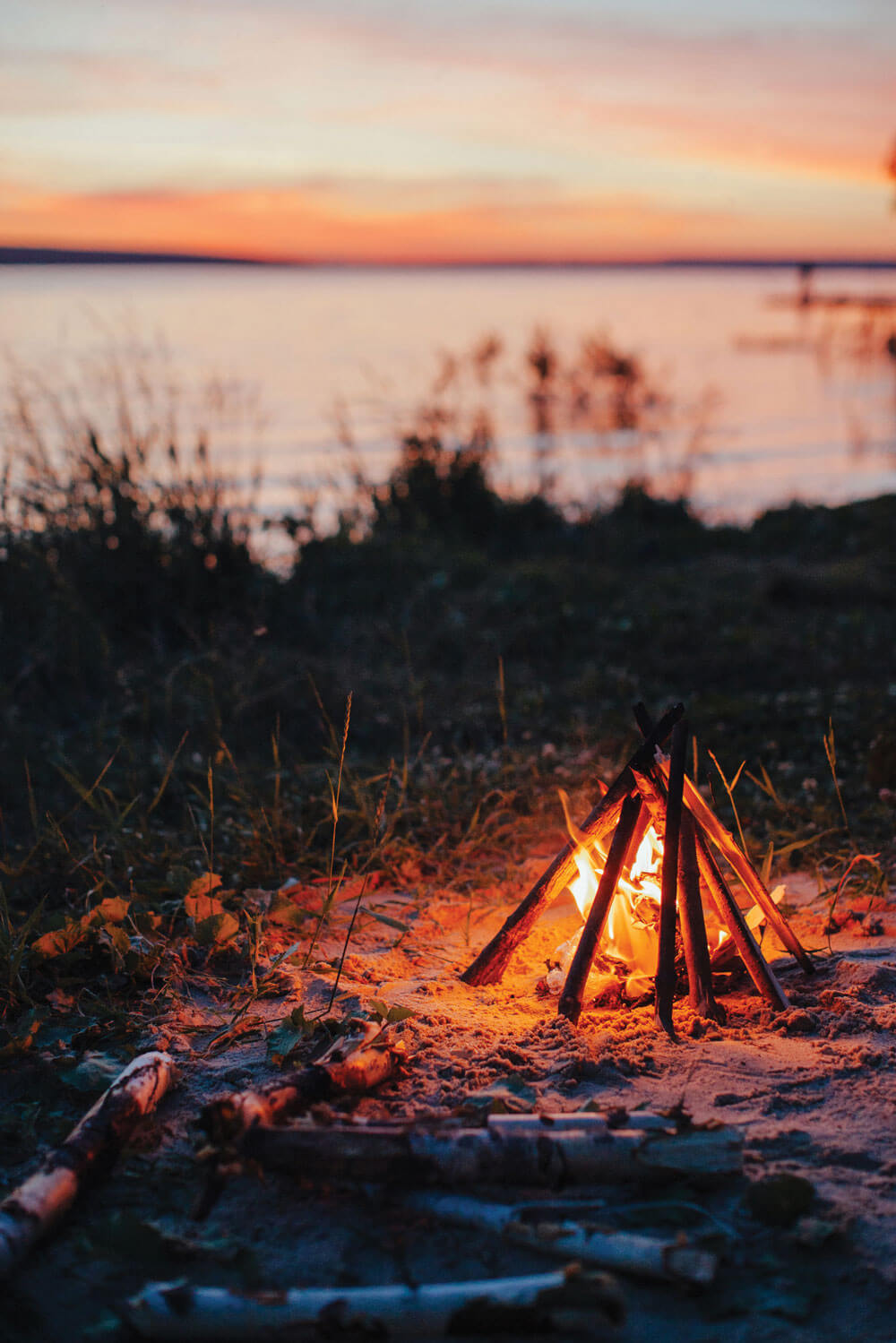 When it comes to recipes for building a campfire, a simple teepee of sticks built over dry kindling usually yields the best results. photograph by ©LILIYA RODNIKOVA/STOCKSY UNITED

Lay twigs over the tinder. Lay sticks over the twigs. Nothing bigger than your finger in that smaller, interior fire; most bits ought to be chopstick-size. Above that, larger stuff, and this is the easy part: A teepee fire looks like a teepee, and a log cabin fire looks like a log cabin. Unless it’s a bonfire you’re after, don’t get overambitious: Lay the larger stuff on later, once you’ve actually got the thing lit. Your ideal fire lay probably ought to be about the size of a mixing bowl at first, or perhaps a moving box.

Build it and light it on ground you’ve cleaned and cleared. A campfire needs to stay in camp. Safety first. Keep your matches in a film canister. Bring cotton balls or paper in a Ziploc bag. If it’s not too heavy to carry in a backpack for several miles, then it’s not out of bounds. Here, I’ ll give you the very edge of what makes a real fire, the outer limit of what you’re allowed to bring, what help you might employ: Pack dryer lint into a cardboard egg carton; melt crayons or candle wax over the top to seal it. Cut the carton into individual “eggs,” and bring one or two of those from home. Use only in an emergency, which is to say if it’s raining, or after you’ve tried four times and failed.

Smoke follows beauty. The sparks trail up into the night sky. The boiled water from the creek, set back in the creek in a canteen to cool it, tastes like the air smells. Poke the coals, add the larger sticks, let the kids learn how to be careful. Cook cored apples filled with butter and brown sugar up against the edge of the fire. Bank coals around their foil wrapping. Listen: the wind in the leaves, the pop and snap of the water that remains in the wood. Tell lies. Tell longer stories, all true. The rain got harder as the morning went on, my father tells me. My father, who taught me to build a fire. It was the structure of the fire that was as tall as Lewis was, he says. The flames went up another 20 feet. Add those last few sticks and logs, friends. Stay up a little while yet.