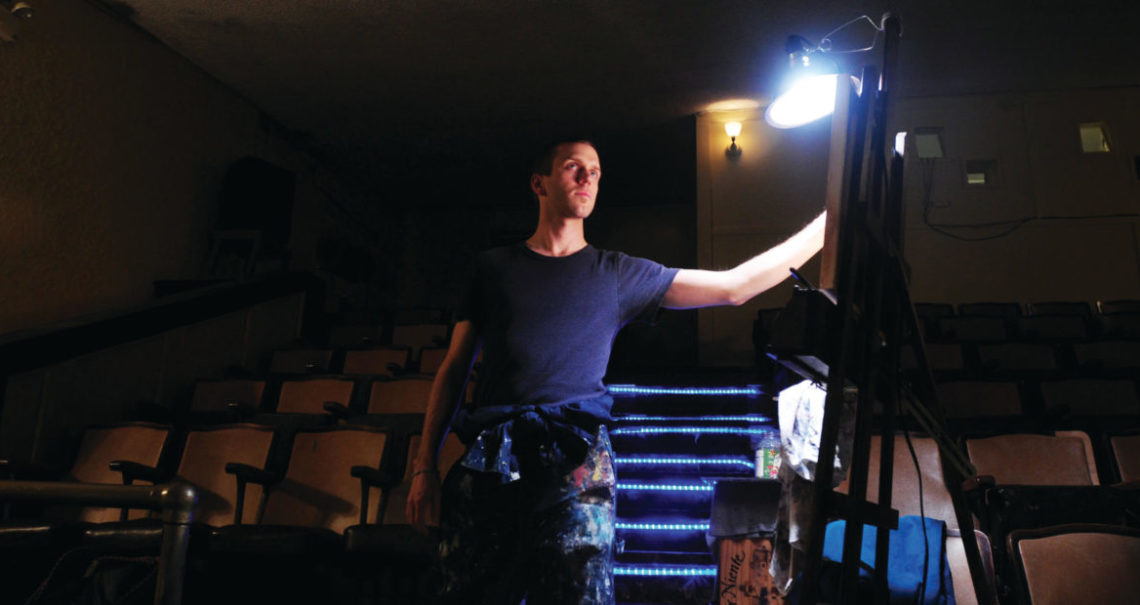 In April, the featured exhibition at the Randolph Arts Guild’s Moring Arts Center on Asheboro’s Sunset Avenue will be Asheboro, and its people, presented through the eyes of artist Les Caison III.

For several months last year, Caison became a familiar figure around town, seen setting up his easel everywhere: in the old city cemetery, at a dress rehearsal in the Sunset Theatre, or tucked away in a parking lot for a different perspective on a familiar sight in the old county courthouse. Caison invited folks to sit for quick portraits.

It’s his job, he says, to engage the viewer.

“I just want you to be able to look at art and enjoy things that you might not normally consider.” He calls it “wonder bread for your eyes.”

He enjoyed the creative vibe at the Arts Center, where he became something of an artist in residence. And who knows, he says, after years of living in Asheville, he may decide to call Asheboro home for a while.

“The community here has been very supportive and very welcoming,” he says. “I’m sure that gets said a lot. I may be just as curious as they are how we can continue the relationship.”

As a lad, Caison earned milk money, pencils, erasers, and such by dashing off drawings of drag racers and muscle cars for classmates while riding the school bus. He was also an all-state saxophonist during his high school days in Greensboro; for a few years, the visual arts took a back seat to his music.

But he never abandoned drawing and painting. By the time he was an upperclassman at Appalachian State University, Caison was earning commissions and regularly selling art. His senior thesis was 13 works, a visual narrative tracing jazz from the early 1900s to the 1950s. After he completed his thesis early, faculty members challenged him to work harder: So he executed a dozen portraits in about two weeks.

Fresh out of college, Caison found an apartment, a studio, and a steady succession of solo shows. He says he’s sold more than half of his work — an average output of 30-40 works of art a year. But selling what he produces is not his end-all and be-all.

“I just do it,” he says. “I love the urban narrative. I love telling stories.”