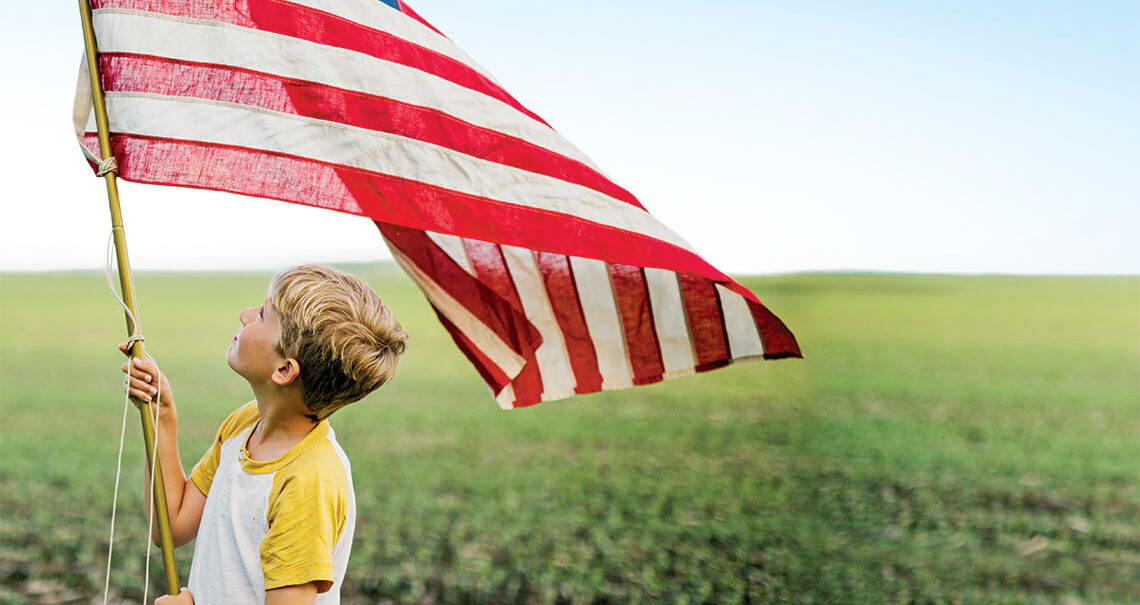 In many ways, the big things went away — schools and churches, restaurants and movie theaters — and we found that the small things got us through. A call from a friend. A rediscovered recipe. A silly cartoon. An old movie. A clutch of flowers. Even chores, small or not-so: Cleaning out the closets and the sheds. Eating down the freezer. Organizing the photographs.

And there they are, just as you left them, mixed in with random others: the children lined up in matching flag T-shirts, a neighbor with crossed eyes and a corn cob in his mouth, a teenager clutching a handful of sparklers or Roman candles, a face whose grin is smeared with watermelon juice. The pictures from past July Fourths are your personal history of celebrating America’s history.

With a birthday only days apart from Uncle Sam’s, my personal history is bound to our nation’s. To July 20, 1969, say. I’d turned 14 scarcely two weeks earlier, but I wasn’t teenager-cool enough not to be lying flat on my stomach, watching two American astronauts land on the moon and plant our flag on its desolate surface. There are no photographs of that night, though, because we were so stunned, so awed by what was taking place before our eyes on the television screen, that no one thought to take a picture of ourselves being awed. Despite 50 more years of extraordinary technological advances, getting to the moon still seems far more amazing than the technology of a smartphone selfie.

Seven years later, and I was a college graduate in 1976, America’s bicentennial year. That Fourth of July, along with celebrating 200 years of the country’s freedom, I was celebrating independence from classrooms and homework by rising at dawn to raft down the Chattooga River with a dozen similarly newly independent pals. 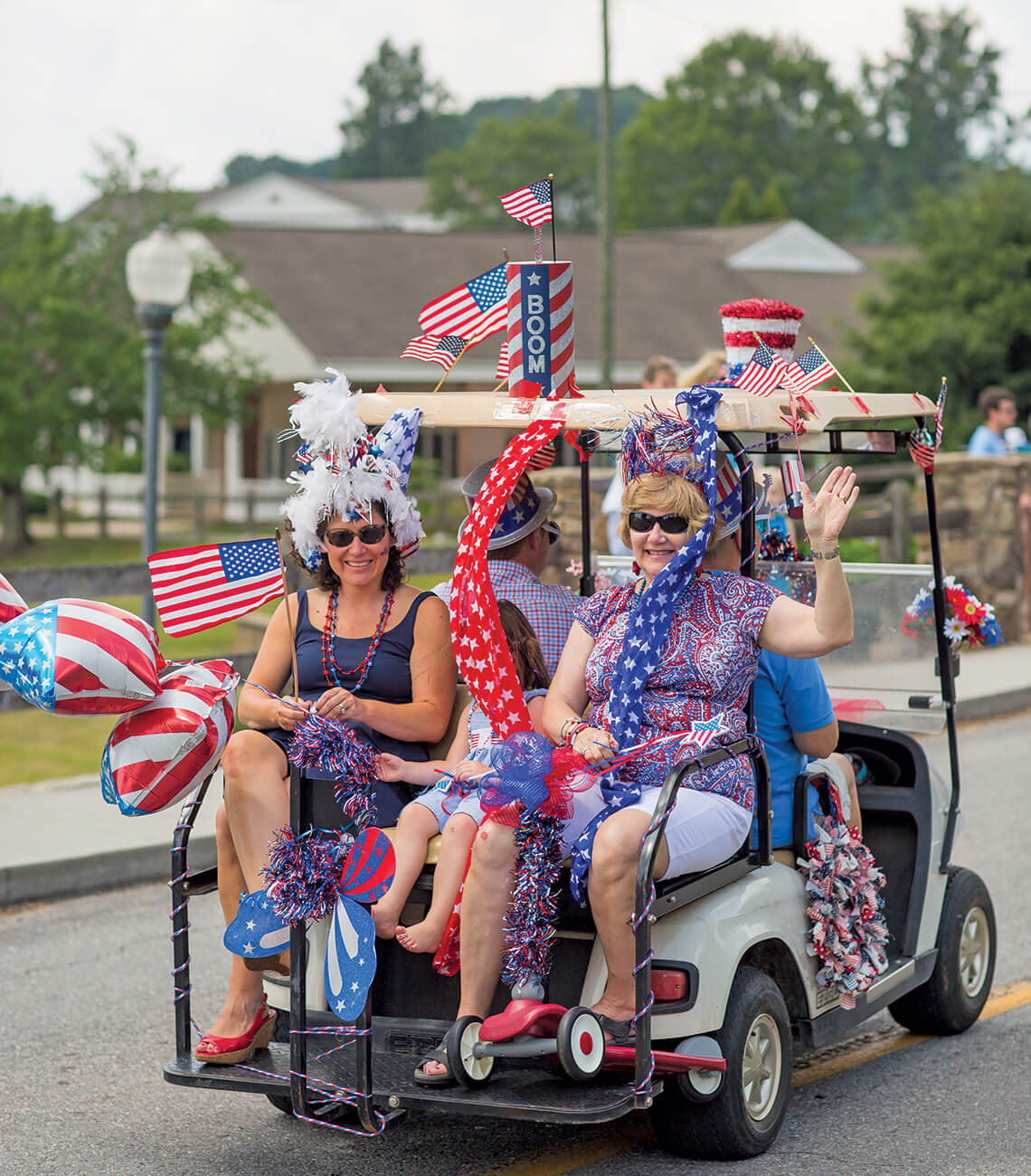 Residents of Lake Junaluska celebrate Independence Day in style. Since 1978, they’ve gussied up golf carts, cars, and floats for a grand parade. photograph by Tim Robison

Funny, isn’t it, how so many of us refer to the holiday as “the Fourth of July.” Nearly no one calls it “Independence Day” — the reason for the season, as it were. Recall, then, that members of the Second Continental Congress, including representatives from the colony of North Carolina, voted to declare themselves independent from the kingdom of Great Britain on July 2, 1776, forming the United States of America. And two days later, on July 4, they adopted a document explaining the decision. That document, the Declaration of Independence, lives in a special bulletproof case under the rotunda of the National Archives in Washington, D.C. At night, it’s lowered into a vault.

That’s the reason. The reason for reverence as well as reveling. For solemnity as well as silliness. All of which are so especially welcome this Fourth of July, when we’ve emerged as if from a cave, rubbing our eyes and blinking in the sudden sunlight, into long-awaited, newly appreciated, well, freedom. Independence.

So get out all the rolling stock — the wagon, bike, trike, stroller, scooter, skateboard, Big Wheel, golf cart, and pickup. Decorate and doll them up absolutely unprofessionally with pinwheels and bunting, streamers and balloons, flags and flags and more flags, for the absolutely unprofessional ragtag parade or impromptu celebration in your neighborhood or lakeside, mountain hamlet or coastal village, backyard or driveway. Put on sunglasses with frames outlined in silver stars, a hair band of Lady Liberty’s crown, an oversize foam Uncle Sam hat.

Rejoice in that familiar, favorite potato salad recipe. Laugh away how the blueberry background on the flag cake bleeds into the white icing stripes, turning the entire endeavor slightly lavender. Stick toothpick flags into cupcakes and bigger versions around the mailbox, along the sidewalk. You can’t overdo the red, white, and blue. Not in daytime, or nighttime either, when you’re on a blanket in a park, a boat in the sound, a stadium bleacher, watching those same colors explode in dazzling bursts and sprays and arcs beneath that same moon where a pair of patriots planted our American flag. A million and one ways to celebrate independence, and the freedom — especially this year, the freedom — to make the holiday our own.

Still, I keep remembering those Italians, cooped up and quarantined, who sang from their balconies this spring. With all else that we Americans do to celebrate the Fourth of July, surely we need to sing more. Come on, go on. Stand up on your porch, your patio. Rise from your rocker or dock, beach chair or bleacher. From your cottage or condo or the hood of your car. Stand up and sing. Be Irving Berlin and Woody Guthrie, Francis Scott Key and George M. Cohan. Of thee I sing, baby, land that I love, sweet land of liberty, this land was made for you and me. Here’s betting someone else from the land of the free and the home of the brave joins in. Happy Independence Day.