Near the start of Riverwalk Trail in Hillsborough, Sol Ramirez prepared to lead the town’s annual Solstice Lantern Walk last year with a giant crescent moon puppet. “I’ve never created a puppet that lights up, so this is outside of my comfort zone,” Ramirez said as he adjusted the moon’s left hand, which held a bright star.

Ramirez, 17, caught the puppetry bug early on when his parents took him to see a show put on by Saxapahaw’s Paperhand Puppet Intervention at the University of North Carolina’s Forest Theatre. He was in elementary school when he started his own group, 1,2,3 Puppetry, to encourage other young people to get involved in the art. Then, in 2019, the Hillsborough Arts Council commissioned him to create the lead lantern for the solstice walk. 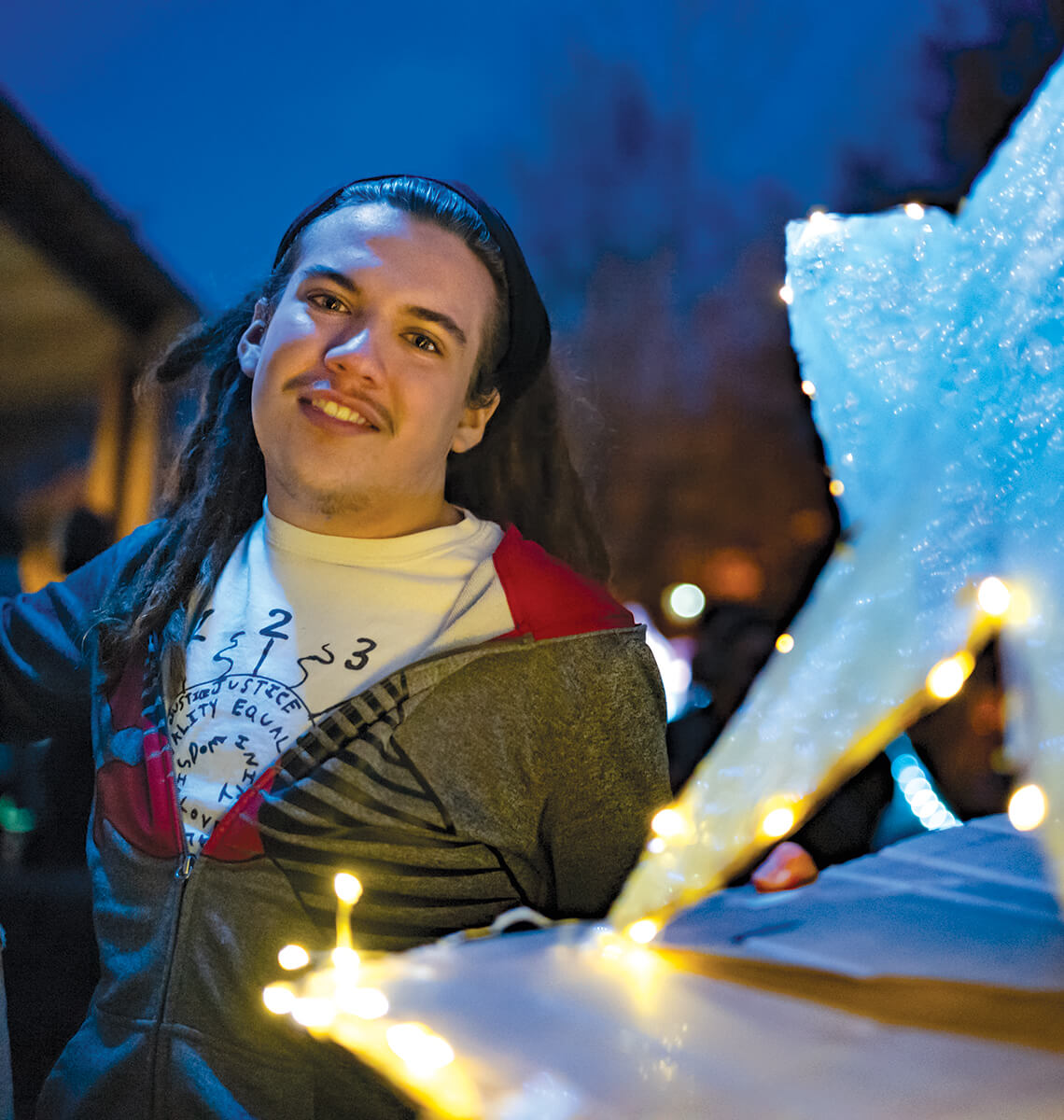 As stars began twinkling in the night sky, Ramirez conferred with the event’s organizers and pivoted his towering puppet in the direction of Riverwalk. There was no official starting time for the promenade, no bell or announcement. Instead, Ramirez simply guided the moon into action, waving its fluid arms as it floated into the darkness. Participants fell in line behind the light of the puppet moon, the excited, expectant hum of conversation giving way to a hushed reverence. Over the next 20 minutes or so, Hillsborough’s Farmers’ Market Pavilion, where people had converged earlier with their colorful lanterns, gradually emptied.

The event had started on that crisp December evening as twilight descended. Months before social distancing precluded such communal gatherings, large groups filed into the pavilion. The scene seemed so innocent: Couples holding hands and teenagers in packs. Babies in strollers and elderly in wheelchairs. Some residents walked over together from nearby homes while others drove in from hours away. As more people arrived, with them came an astonishing array of homemade lanterns, from simple spheres to elaborate creatures with moving parts.

This year, the Lantern Walk will take a hiatus due to Covid-19 restrictions. But the Hillsborough Arts Council is still encouraging residents and businesses to create and display lanterns in a collective community celebration of the solstice in hopes that people can enjoy the lights from the safety of their cars or in small family group walks.

The town’s annual observation of winter’s arrival began, as so many good ideas do, with one person asking, What if? That person was sculptor Tinka Jordy. She envisioned a small group of her friends and neighbors gathering to mark the longest night of the year with a joyful observation of light and fellowship. Jordy had helped launch an earlier event, Hillsborough’s Handmade Parade, in 2008, inspired in part by her New Orleans roots and love of parades, and her involvement with the Cleveland Museum of Art’s Parade the Circle, a spirited celebration featuring handmade puppets, floats, costumes, and music. Six years ago, the annual Lantern Walk grew out of the Handmade Parade, which remains a biennial event.

“One of the things I like about the Hillsborough Handmade Parade is the process leading up to it,” Jordy says. “The focus is on creativity and community, not about making a perfect finished product. And when everyone comes together with their creations, there is a real sense of belonging to something bigger than yourself. The winter solstice comes during one of the busiest times of the year, so I imagined something that had the same creative community aspect of the Handmade Parade but that was intentionally quiet and calm.”

Solstice rituals underscore that no matter how dark things may get, brighter days are ahead.

At that point, Hillsborough had completed the meandering Riverwalk, part of the state’s Mountains-to-Sea Trail. Jordy, a member of the Orange County Arts Commission Advisory Board, floated the idea of a creative procession along Riverwalk and posted a notice on Facebook, guessing that 30 or 40 people might show. More than 1,000 people came, and a solstice tradition was born. Managed by the Hillsborough Arts Council, which sells lantern-making kits and offers workshops in advance, the Solstice Lantern Walk provides a tranquil antidote to the hectic holiday season.

Hillsborough’s Lantern Walk joins countless other solstice observations around the world and throughout history. Thousands flock to Stonehenge to watch the sun rise with exquisite precision through the towering megaliths. Iranians observe Yalda, an ancient Persian festival marking the power of light over darkness, by staying awake past midnight, reading poetry, and eating dried nuts and fruits. Some Native American tribes perform rituals to honor the sun and invoke agricultural prosperity for the coming spring. Solstice rituals underscore that all things are passing — no matter how dark things may get, brighter days are ahead. 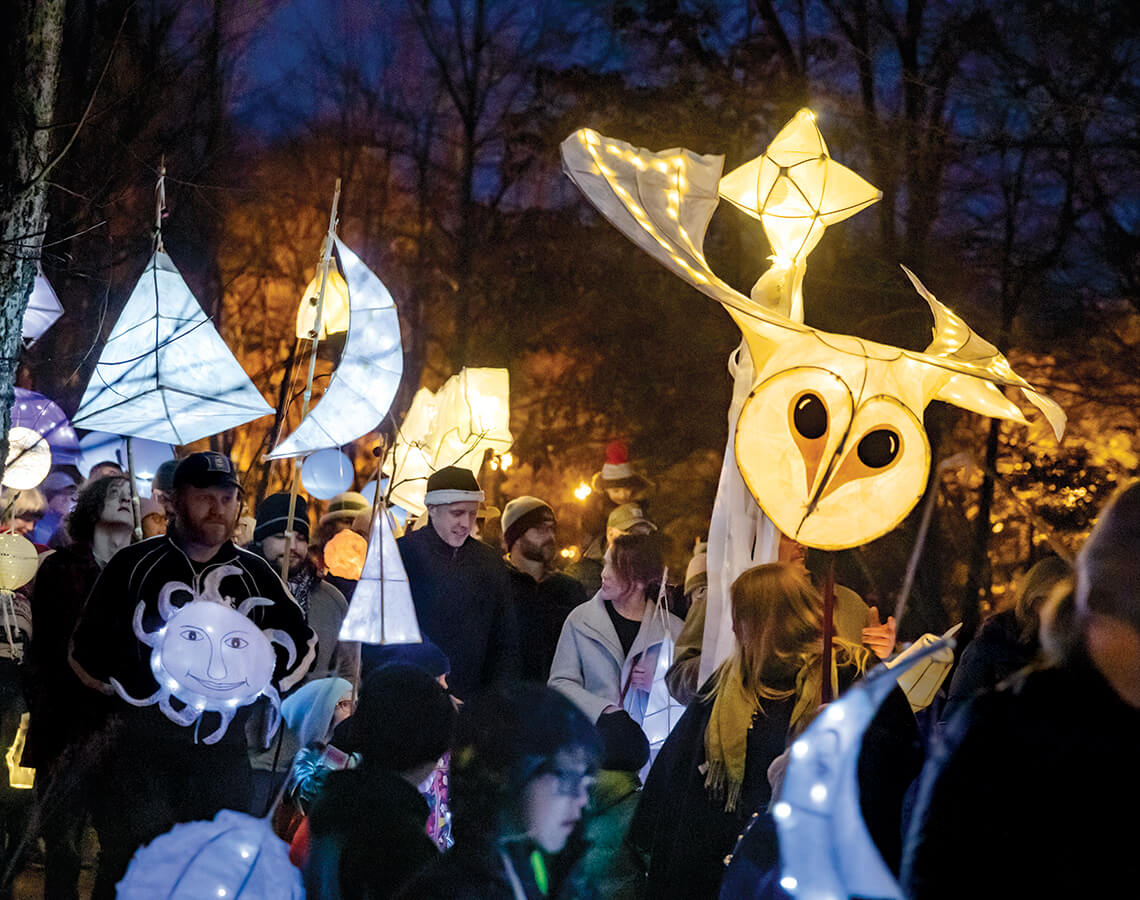 Creatures of all kinds are represented at the Lantern Walk, but the moon is the star of this show. photograph by Charles Harris

Before last year’s Lantern Walk in Hillsborough officially stepped out, the crowd at the Farmers’ Market Pavilion continued to swell. The Feldmann and Bedell families put the finishing touches on the huge dragon lantern they’d been working on for weeks, using materials sourced from The Scrap Exchange in Durham. Mariana Fiorentino arrived with Guffina, her lantern owl, which joined a fantastic menagerie of jellyfish, dragonflies, butterflies, deer, dolphins, and a flock of snow geese. There were sparkling stars and basic geometric shapes, LED-lit umbrellas, lightning bolts, snowflakes, a mushroom, and a fire truck. A cluster of young friends sported glowing lightsabers. There were bursts of laughter and exclamations of wonder.

A group of animated middle-school girls chatted together, comparing all of the fanciful lantern designs. Nearby, a toddler stood transfixed by the colorful displays. The baby’s mother explained that the family had recently relocated to Durham from New Orleans, where community celebrations like Mardi Gras are more raucous affairs. “Parades are in our blood,” she said, smiling.

A few feet away, Debbie Marion clutched her cheerful snowman lantern and reveled in the crowd’s buzzing, anticipatory energy. “I could have stayed home tonight and watched a movie, but I wanted to be inspired,” she said. “I really needed a sense of spiritual connection.”

With Ramirez leading the way, the procession slowly snaked its way down Riverwalk and headed west, the trail hugging the Eno River. From a distance, the bobbing white lights were almost hallucinatory, a magical current of shapes and creatures. The marchers continued to Gold Park, where the puppet moon and all of those that followed circled back toward Farmers’ Market Pavilion. The Lantern Walk route is an out-and-back loop that takes about 40 minutes. There were so many participants that, at a certain point, celebrants were walking past those ahead of or behind them. The lanterns’ white lights shone softly on wave after wave of peaceful, smiling faces, young and old, all united in quiet communion.