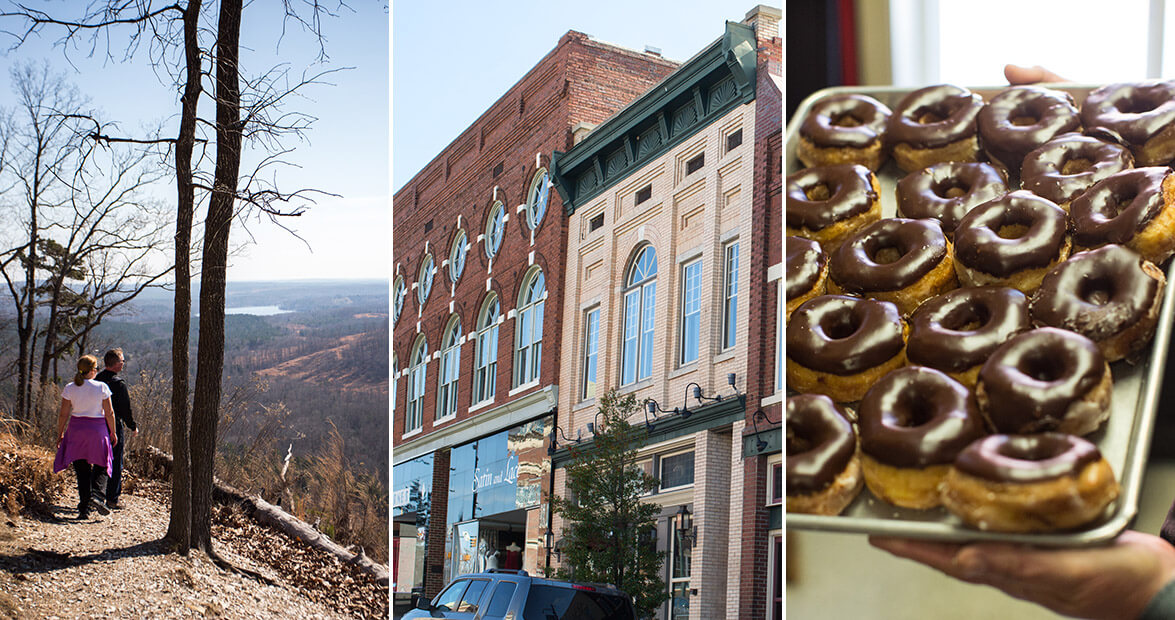 There’s an old adage that nothing good happens after 2 a.m., but at Donut Dinette, that’s when the magic takes place. At 2:30 a.m. each day, employees file into the eatery to make the yeast doughnuts that locals go crazy for. “I wouldn’t say we have a special touch or process, but we still make them by hand,” owner Doug Laxton says. In an era when Krispy Kreme can crank out thousands of doughnuts in an hour, Donut Dinette glazes just a few dozen at a time. The result: 70-cent golden brown treats with a distinctively flaky glaze that instantly melts in your mouth. For a few cents extra, Donut Dinette offers chocolate-covered doughnuts and cinnamon rolls, but you have to get there early for those — they sell out quickly. Most of the tables and barstools are occupied by regulars; they know this as the place where they can expect a hearty breakfast and a heartier “Hey there.” Laxton, who bought the business several years ago, figures that the Donut Dinette has been around for at least seven decades. “I can remember eating them as a kid, and I have people coming in here a lot older than me,” he says.

On the edge of town sits, almost impossibly, some of the continent’s oldest mountains. The Uwharries are said to have gotten their name from an area Native American tribe and have long served as a quick hiking getaway in the Piedmont. Estimated to once be 20,000 feet high, the range’s crests have weathered away considerably over the centuries — but the highest peak of them all, Morrow Mountain, remains a great vantage point from which hikers can take in the sight of Lake Tillery. Trails range from less than a mile to nearly 10 miles in length and are varying degrees of intensity. In the winter, on the 4.1-mile Fall Mountain Trail, barren trees make it easier to spot bald eagles and ospreys in search of fish. But in the warmer months, bass abound, prime for fishing. From May through October, launch your own boat into the water or rent one from the park on a sun-filled afternoon, just as the locals do. 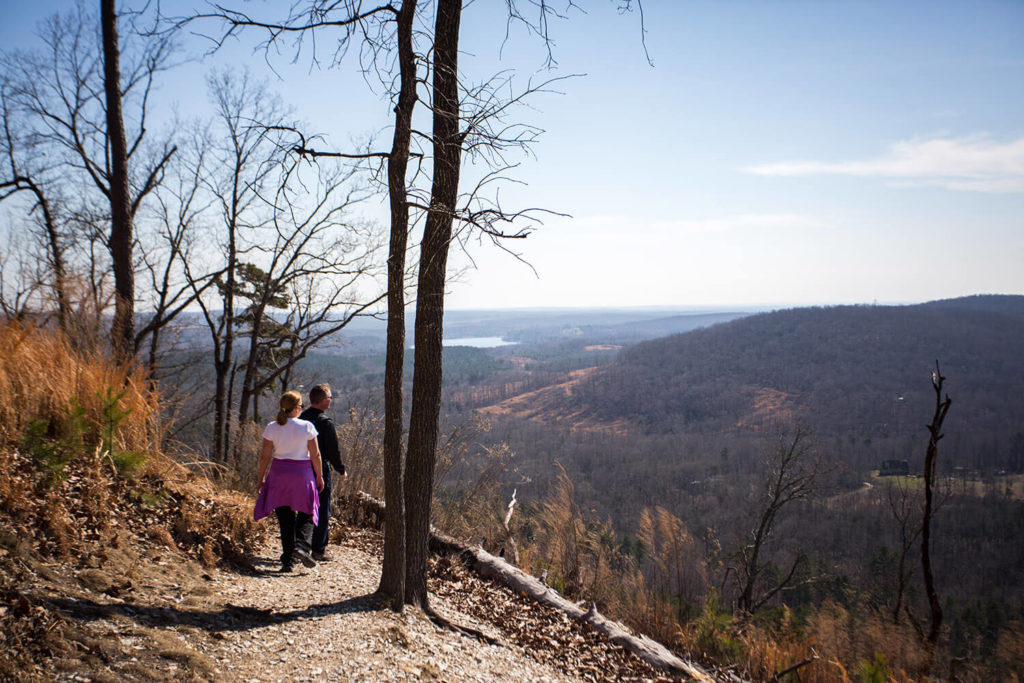 There are great hiking spots just beyond Albemarle in the Uwharrie Mountains. photograph by Logan Cyrus 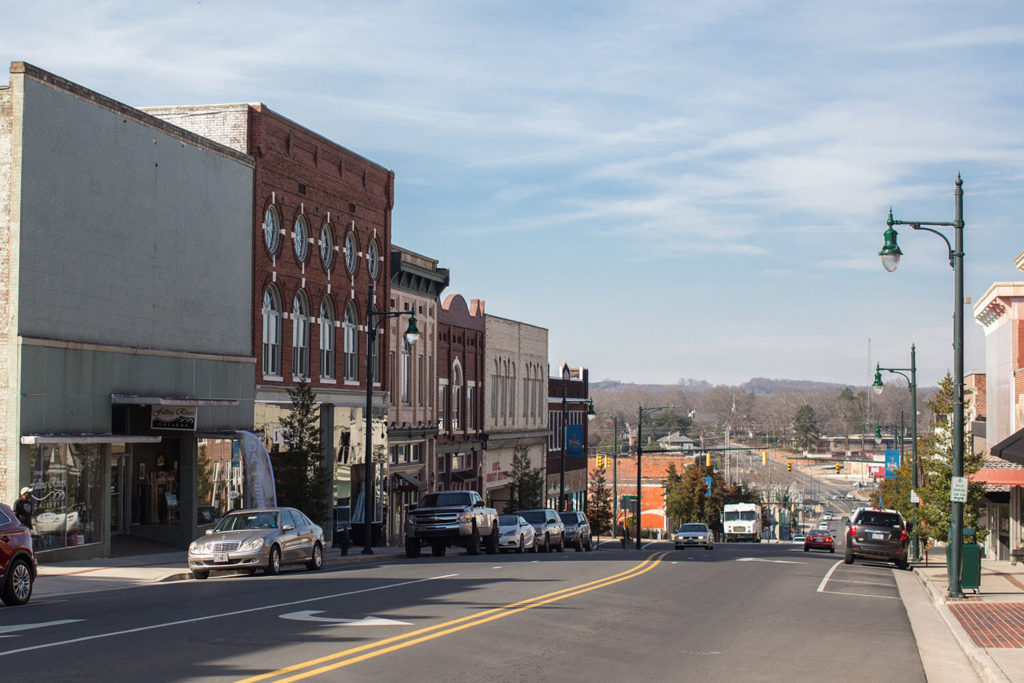 You might think that in smaller towns, a restaurant only needs to be of a certain standard to fit the bill. But Off the Square owner Michael Bogdanski and manager Justin Mauldin like to see things a little differently. “Off the Square is a big-city restaurant in a small town,” Mauldin says. It has been since it opened in 2010, and though its name may be “Off the Square,” the restaurant is at the center of what many locals hope is just the beginning of a revitalization movement in downtown Albemarle. Before purchasing Off the Square in 2016, Bogdanski worked in the big world of consumer products and spent 16 years living in Europe — and eating some of the continent’s best cuisine. Meanwhile Mauldin grew up on a farm in Stanly County, where he gained an appreciation for local sustainability. He joined the Off the Square team a year after the restaurant opened. The meshing of Bogdanski’s and Mauldin’s distinct origin stories fittingly reflects the concept of the restaurant, one driven by an inspired menu that hasn’t lost touch with its roots. Made with ingredients from local farms, dishes like herb-roasted chicken and mustard-crusted salmon are approachable and comforting — yet they’re creative enough that they’re driving foot traffic downtown. “One of the most special things for me is when I come here with my kids and we sit down for dinner,” Bogdanski says. “I rather come here than somewhere else — and that’s not because it’s my restaurant.” Don’t mind if we do, either.

Shawn Oke is Albemarle’s fire chief, but locals aren’t nearly as impressed with that title as they are with his other one: owner of Albemarle Sweet Shop. “You can’t not like somebody who brings you cookies,” Oke says with a chuckle. How’d a man who has spent decades putting out fires end up owning a century-old bakery? Oke’s uncles were in the baking business in New England, so he grew up with affection for the craft. When he heard that Albemarle Sweet Shop was for sale in 2000, he knew he had to buy it — never mind the fact that he was working 24-hour shifts at the fire department, going to college, operating a deli, and raising two small children all at the same time. “When we closed the loan, the guy took a big shoebox out,” Oke says. “He threw it on the table and said, ‘That’s what you just paid all that money for.’” Inside the box were handwritten recipes from over the decades. The goodies the bakery makes today haven’t strayed much from those sold in 1920 and the years that followed. Retro custard pies, fruit bars, cream horns, and beloved sugar cookies decorated like clowns tantalize in their glass cases. The smell of the place is so intoxicating that the cashier jokes she’d be a millionaire if she could make a candle with the store’s scent. Nostalgia doesn’t even begin to cover it. “For me, the energy you get from watching an older person bring a young child in and go, ‘You know, this is just like it was when I was your age’ — it just sits there,” Oke says. “It’s almost like you’ve been handed something to take care of. I think I’d be run out of town on a rail if I closed the place.”

In a town that some residents endearingly refer to as “a modern-day Mayberry,” you can enjoy old-school cinematic magic at one of just five drive-in movie theaters that are still in operation in North Carolina. At the height of our country’s love affair with cars following World War II, North Carolina had an estimated 200 drive-in theaters. Since Hollywood has turned away from relying on traditional 35-millimeter film, drive-ins have been on decline. Modernization costs a pretty penny, but Badin Road Drive-In, which originally opened in 1948, was revived in 1994. It’s been a time-honored weekend destination for families from all over the Piedmont during the warmer months of the year. Admission is $7 for adults and $5 for children ages 6 to 11, but you can’t put a price tag on the lasting memories of running barefoot in the grass or grilling hot dogs while waiting for showtime. 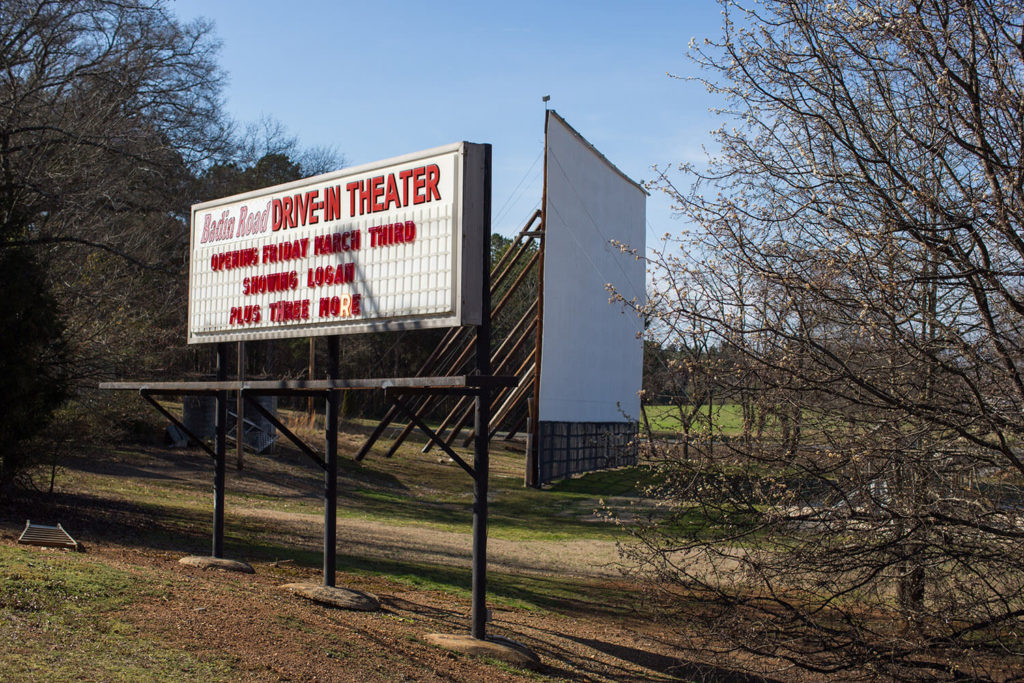 The Badin Road Drive In is one of just five drive-in movie theaters that are still in operation in North Carolina. photograph by Logan Cyrus