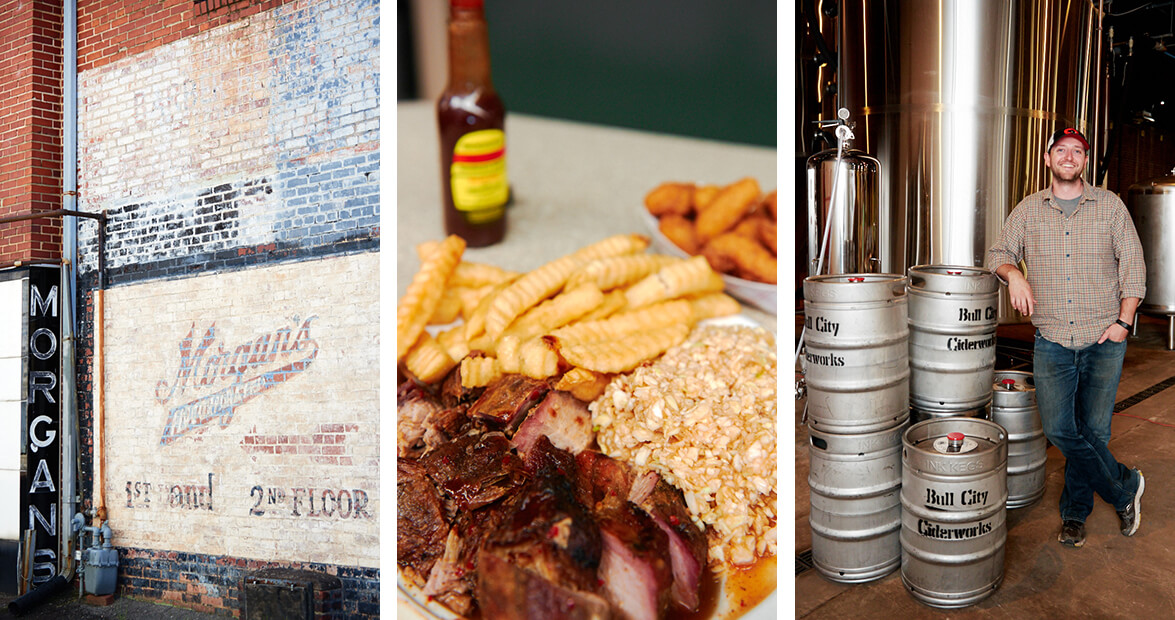 Smoke slowly billows out of the chimneys at Lexington Barbecue just as it has since the place first opened in 1962. Back then, before it was renovated to accommodate the some 7,000 customers who now come through the door each week, the restaurant more closely resembled a modest café.

With the exception of the menu — which boasts tender pork shoulder, zippy Lexington-style dip, and down-home sides — and the family who prepares these dishes, the restaurant has seen some changes over the years. In fact, a lot of Lexington has.

You don’t see smoke as much as you used to in this Piedmont city. Before textiles left town, you could crane your neck to the sky and see it pluming from the stacks of any given mill, those of Wennonah, Nokomis, Dacotah, and Erlanger. Furniture factories thrived here, too. But by the 1980s, most of the textile mills had shut down. Furniture followed suit. 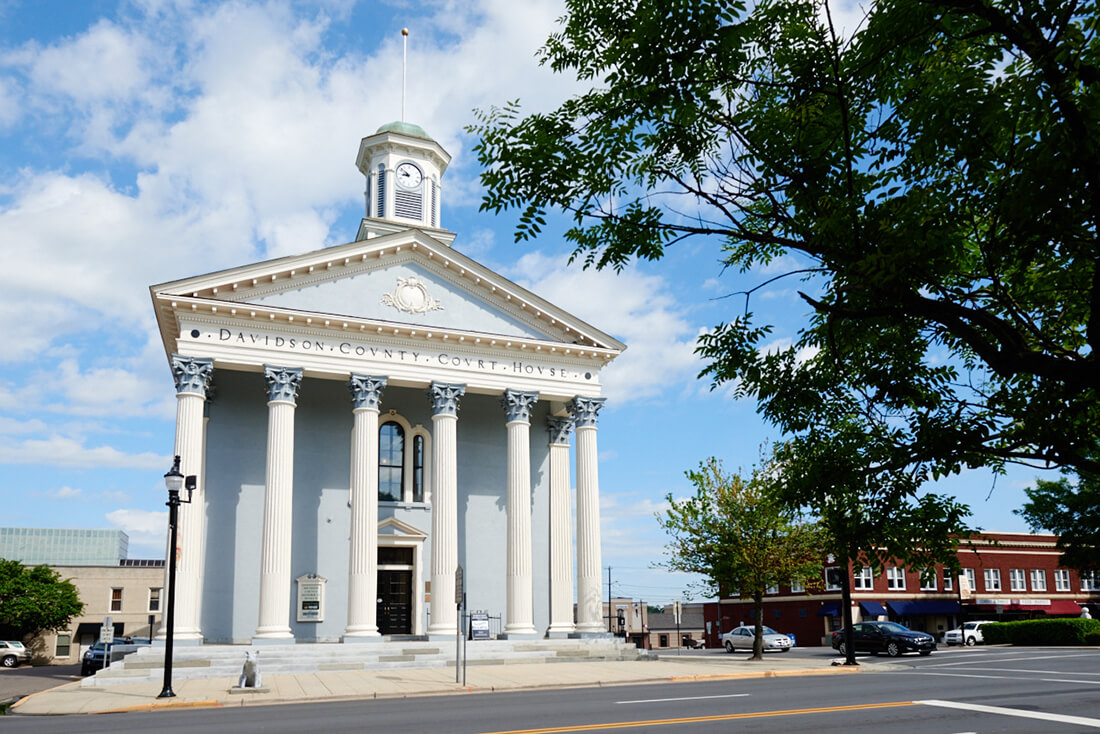 Lexington was named following the Battle of Lexington in 1775, one year before the Declaration of Independence was signed. Locals are proud of the name, which demonstrates the town’s courage and independent spirit, says Rev. Ray Howell of First Baptist Church. photograph by Joey Seawell

When an industry collapses, time and money are the typical culprits. Machines can make things faster. Foreign labor forces can do things cheaper. But fast and cheap have never been tenets of Lexington’s other industry: barbecue.

While more barbecue joints have begun to turn to convenient electric cooking methods, Lexington has largely remained a stronghold for smoking meat low ‘n’ slow over wood coals and doing things the old-fashioned way. Here, the values built on barbecue tradition are giving an old mill town a new life as a city with limitless possibilities.

• • •
“That’s unheard of, cooking something for 10 hours and making a living out of it,” says Lexington Barbecue’s Rick Monk.

Monk has worked at the restaurant for 43 years and has taken over operations since his dad, Wayne, retired a few years back.

Honey. Honeymonk, that’s how locals know Lexington Barbecue. That’s what the restaurant was named when Wayne Monk and his business partner, Sonny Honeycutt, established it all those years ago. The old moniker combines their two last names, but Honeycutt dipped out after an unprofitable first few months, deciding that the barbecue business wasn’t for him. The name stuck anyway.

But Lexington Barbecue is an apt title, too, considering folks come from far-flung places like Finland to sit in these hallowed booths to try the regional style of barbecue the restaurant’s name nods to.

A place of pilgrimage, Lexington Barbecue is. But the best barbecue restaurant in town, it isn’t. Or at least, Monk doesn’t tell you so.

People help people here. For Lexington to call itself the “Barbecue Capital of North Carolina,” you know it takes a village. Much of the town’s barbecue heritage is interwoven as the pit masters who’ve been in the business the longest have learned through apprenticeship.

Rick Monk learned from Wayne Monk who trained under the guidance of legend Warner Stamey. Down on Main Street at the Bar-B-Q Center, which opened in 1955, brothers Michael and Cecil Conrad learned from their father, Sonny.

“We keep progressing, but we still hold true to our roots of what Lexington was around the turn of the last century,” Cecil Conrad says.

A fierce reverence exists for those who came before, but of course, each restaurant has its share of modern updates. At the Bar-B-Q Center, you can now pay for your meal on an iPad at the checkout counter. 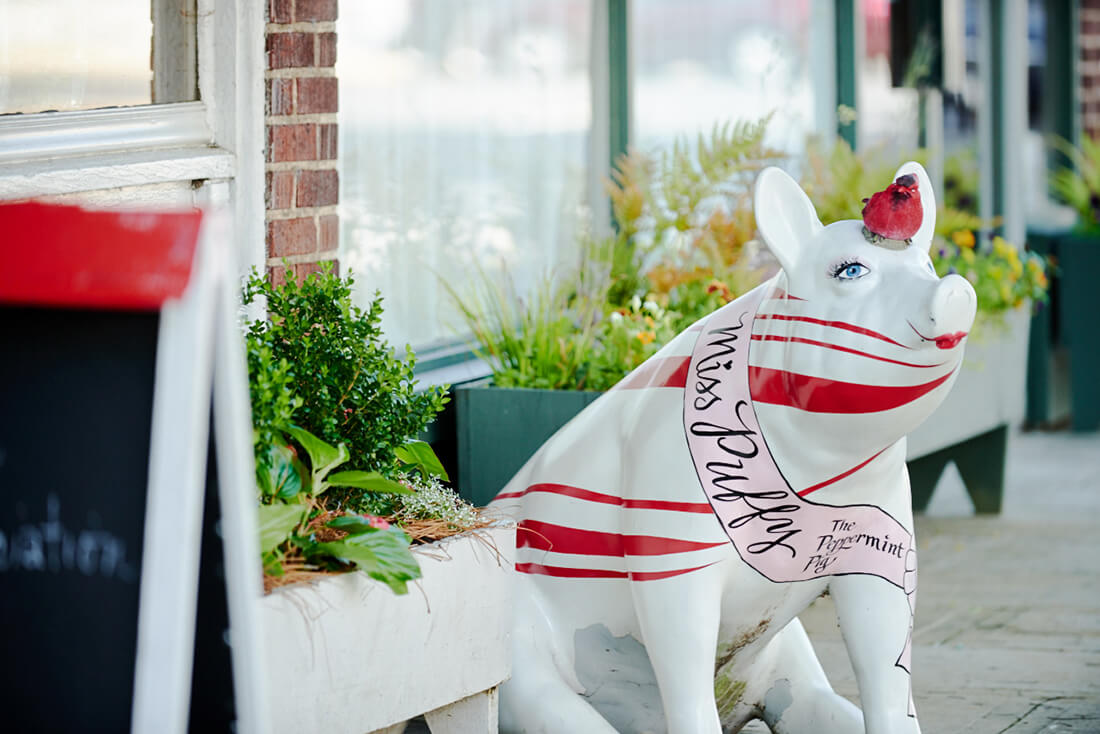 Miss Puffy is one of many painted pigs that adore the streets of downtown. She sits outside of The Candy Factory. “We’ve seen so many kids grow up and then bring their children in here,” co-owner Leigh Foster says. “I think we make a lot of memories for this town and bring back a lot of memories for people.” photograph by Joey Seawell

That’s about as high-tech as it gets at a place where meals are served in paper boats. But these days, national fanfare around humble barbecue joints is predominately driven by a high-tech crowd, armed with Instagram and knowledge from viral “best of” lists.

“We’re on your television, in your magazine,” Monk says. “It’s a culture.”

When you’re asked to feed the likes of Ronald Reagan, Bill Clinton, Willie Nelson, and Beyoncé, that’s when you realize that maybe the word has gotten out to a couple of people.

• • •
Back when furniture reigned in Lexington, salespeople and truck drivers told clients about their hometown’s ’cue while traveling around the state. That’s how word got out. Today, it’s the ’cue that’s helped drive business back to Lexington.

“We were booming, bustling just like any big town, but as everything went away, the town kind of emptied,” Conrad says. “Now the town’s coming back, and it’s really nice to be a part of that.”

Those who were born and raised in the area, but moved elsewhere for college or as adults, find themselves wanting to return.

John Clowney grew up in Midway, which is equidistant from Lexington and Winston-Salem. He remembers always wanting to hang out in Greensboro or High Point, not Lexington, as a teenager. But Clowney now finds himself excited to be in Lexington, so much so that he’s opened up a Bull City Ciderworks location in one of the Depot District’s old warehouses.

All cider production has moved from Durham to Lexington, and the taproom opened in March.

These days when a brewery opens in a small town, it’s a sign of growth and good to follow. Call it the Field of Dreams effect. If you build it, they will come.

“It’s a huge opportunity for us, and a lot of responsibility as well,” Clowney says.

Clowney has plans to open a gastropub on Main Street in June, while the city is currently constructing an amphitheater and hopes to expand its greenway system. Main Street is now lined with charming boutiques when for so long some residents thought they’d never be able to buy an article of clothing there again.

Lexington isn’t merely a whistle-stop town where you get your fill of sweet tea and hush puppies. Yep, there’s pig, but think bigger: Where there’s smoke, there’s fire.