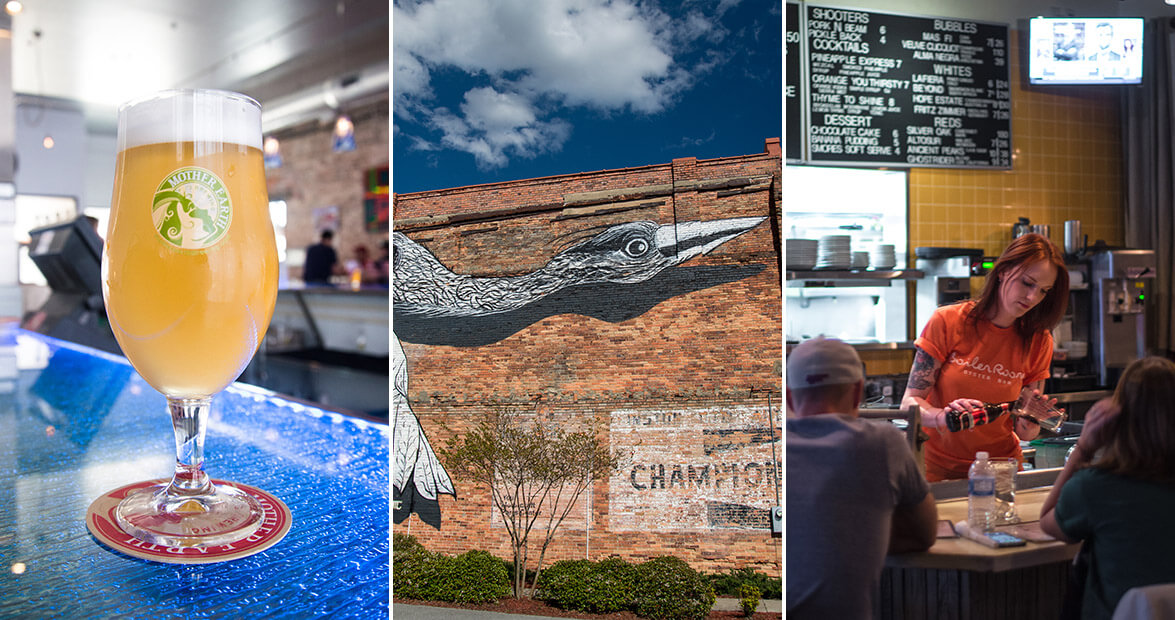 When Trent Mooring and his father-in-law, Stephen Hill, made plans to open a brewery in their native Kinston, they had just the place in mind to set up shop.

“We knew what building we wanted because this was the ugliest building in Kinston,” says Mooring, referring to Mother Earth Brewing’s Heritage Street digs.

You laugh. The thing is, he’s not joking. 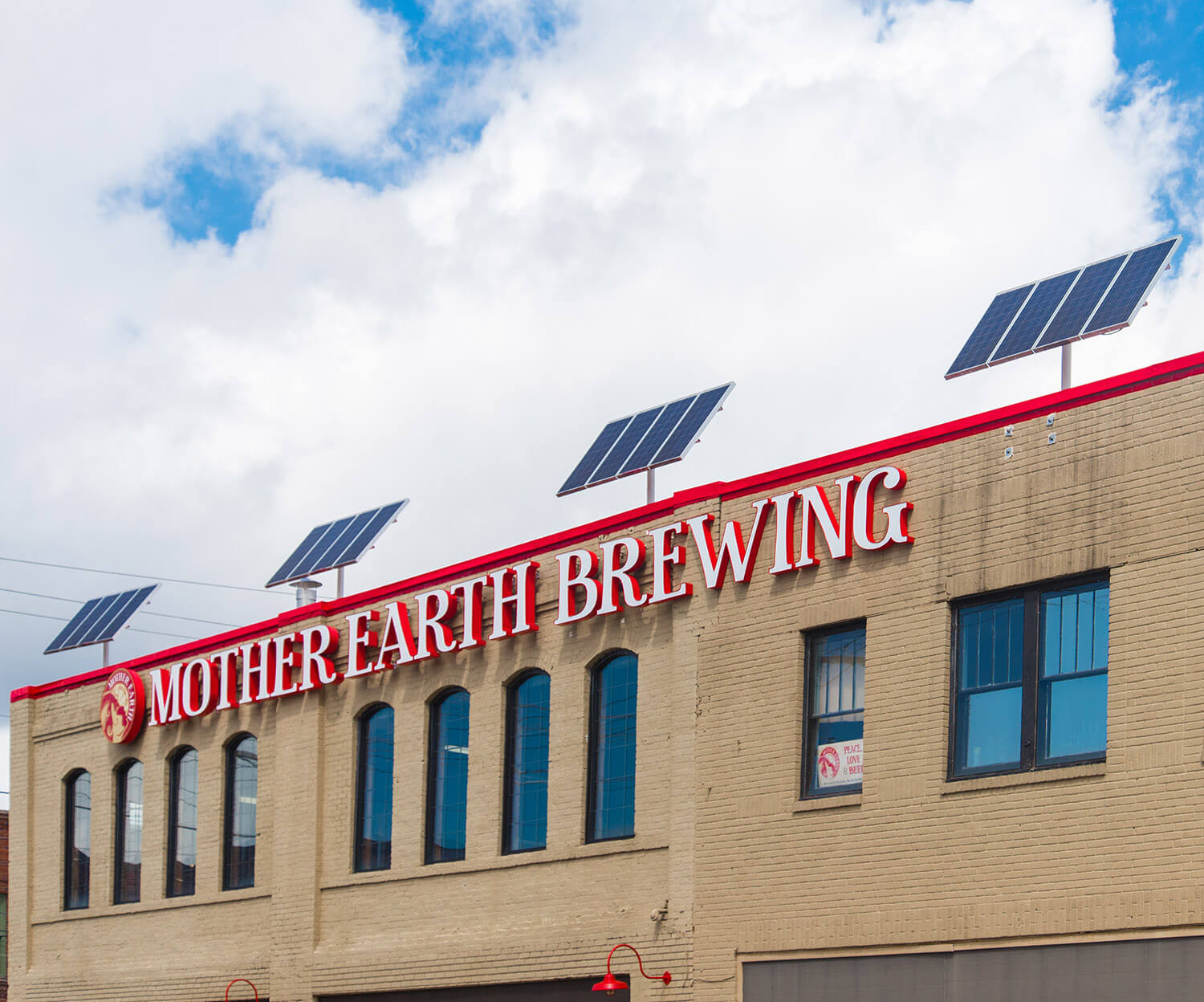 From the gardens out back to the solar panels on the roof, you never know what you’ll discover at Mother Earth. But one thing you won’t find? Televisions in the taproom. Hill and Mooring like to encourage open conversation.

“We wanted to make it pretty,” Mooring says. Pretty, it is. Sunshine pours into the brewery through large windows and dances along distressed brick walls as the day passes. The place is also pretty fun — there’s an old playground slide in the bottling room that employees use. Hill and Mooring have outfitted the building with solar panels and a rainwater capture system, so you could say that Mother Earth is pretty innovative, too.

But if you had asked Kinstonians to describe downtown even just a decade ago, “pretty” would likelier be trailed by a slew of less-than-generous adjectives: desolate, somber, tired.

Locals don’t mask the town’s past. There’s no need to. The story of what Kinston was says a lot about what it’s become. The refrain that details the town’s decline in the 1980s and ’90s is a familiar one to those who’ve been here long enough to remember it happening. They recount it, unflinching, unprompted, to outsiders:

But in 2016, it isn’t uncommon to see this: Out-of-towners sauntering about, stopping at the famed Chef & the Farmer for dinner before settling in for the evening at The O’Neil hotel. You’ll find locals dining at Olvera Street Taqueria; Ginger 108; or the Boiler Room, a funky oyster bar that serves Southern-style poutine and cheekily-named cocktails. Farmers market stalls brim with fresh produce on Tuesdays and Saturdays, and live music fills the streets on certain Thursday nights in the summer.

Kinston, you could say, is having a bit of a moment. Visitors might be quick to explain downtown’s transformation as a product of a cottage industry driven by craft beer or farm-to-table cuisine. But those who were raised here — the ones who’ve stayed or returned home — see what’s happening before them as so much more. This isn’t merely a revival. It’s a revolution. 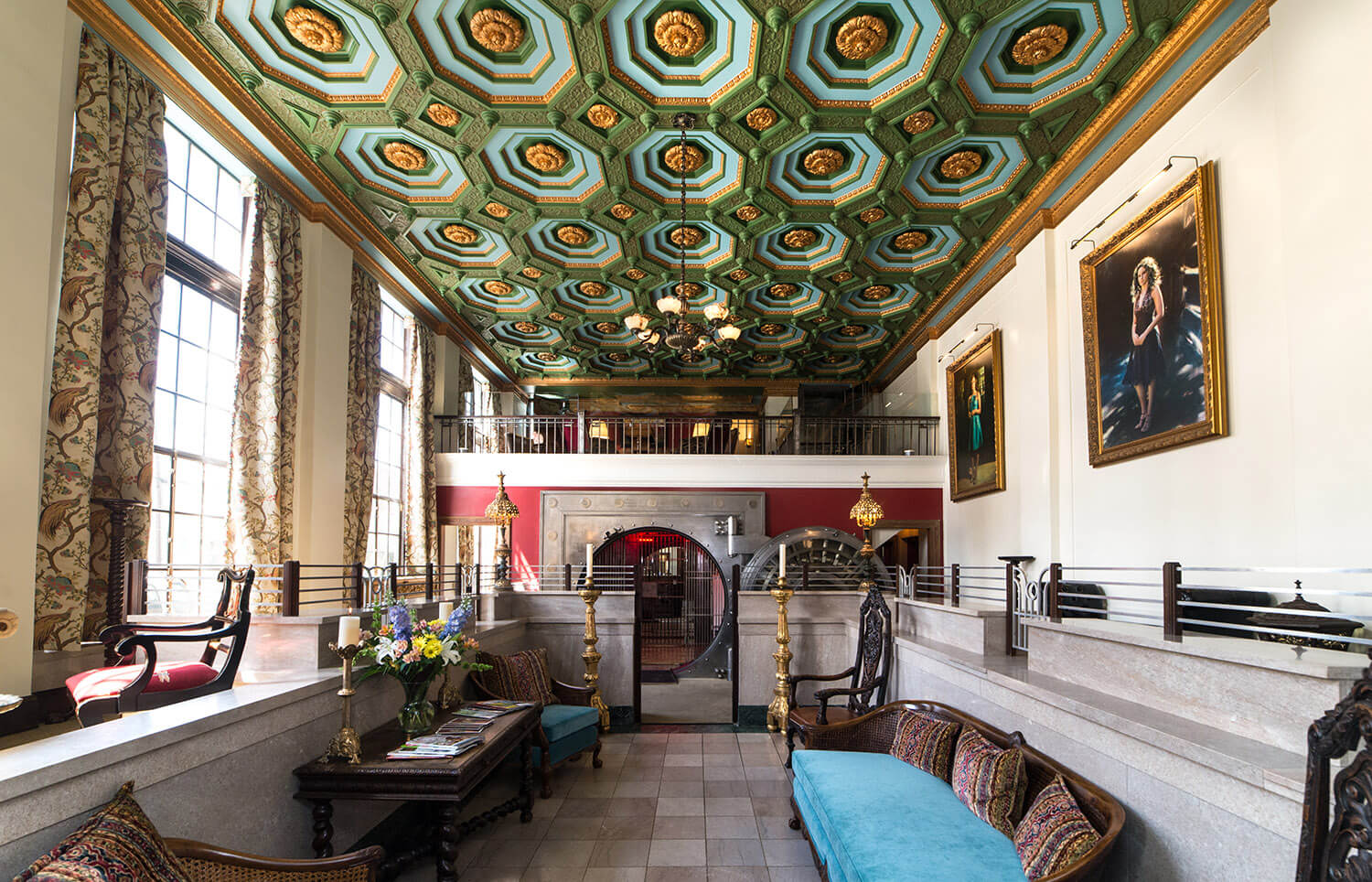 The O’Neil was once a bank. Its vault remains, but now it holds complimentary craft beer instead of cash.

“It had all but died,” Brad Elmore says of Kinston. He owns The Captain’s Corner, a convenience store, with his wife, Jackie.

They should know. They’ve watched life unfold at the store’s tables since Jackie’s parents first opened the place in 1982. All kinds gather daily for hot dogs topped with homemade chili at Captain’s Corner.

Back when the high schools allowed students to leave for lunch, those tables would transform into a sea of letterman jackets.

To natives, mealtime camaraderie is simply commonplace here, and the Elmores are always struck by newcomers’ comments about Kinston’s warmth, as if they had never experienced anything like it before. One man told them that Kinston was the best place he’s ever lived.

Since the PBS series A Chef’s Life began documenting Vivian Howard’s experiences running Chef & the Farmer, it’s not unusual to see a camera crew around town. And of course, wherever cameras go, people will follow. Even still, the recent fanfare that has enveloped Kinston is a welcome surprise to those who’ve called it home for years.

“They come from all over. England. Germany,” says Sherica Chapman, a server at Lovick’s Café.

Lovick’s has been a community fixture since 1941, due in part to its specialty sandwich, something called a “dough burger.” When pricier ingredients were rationed during World War II, the restaurant mixed onions and flour into hamburger meat before deep-frying the patty.

The humble dough burger became a menu mainstay — though Chapman admits she’s only ever eaten one, and that was when she first started working at Lovick’s in 1998. Regardless, her customers request it often. On one family’s recent visit from Orlando, Florida, they asked for some uncooked patties to go, so they could prepare them at home. 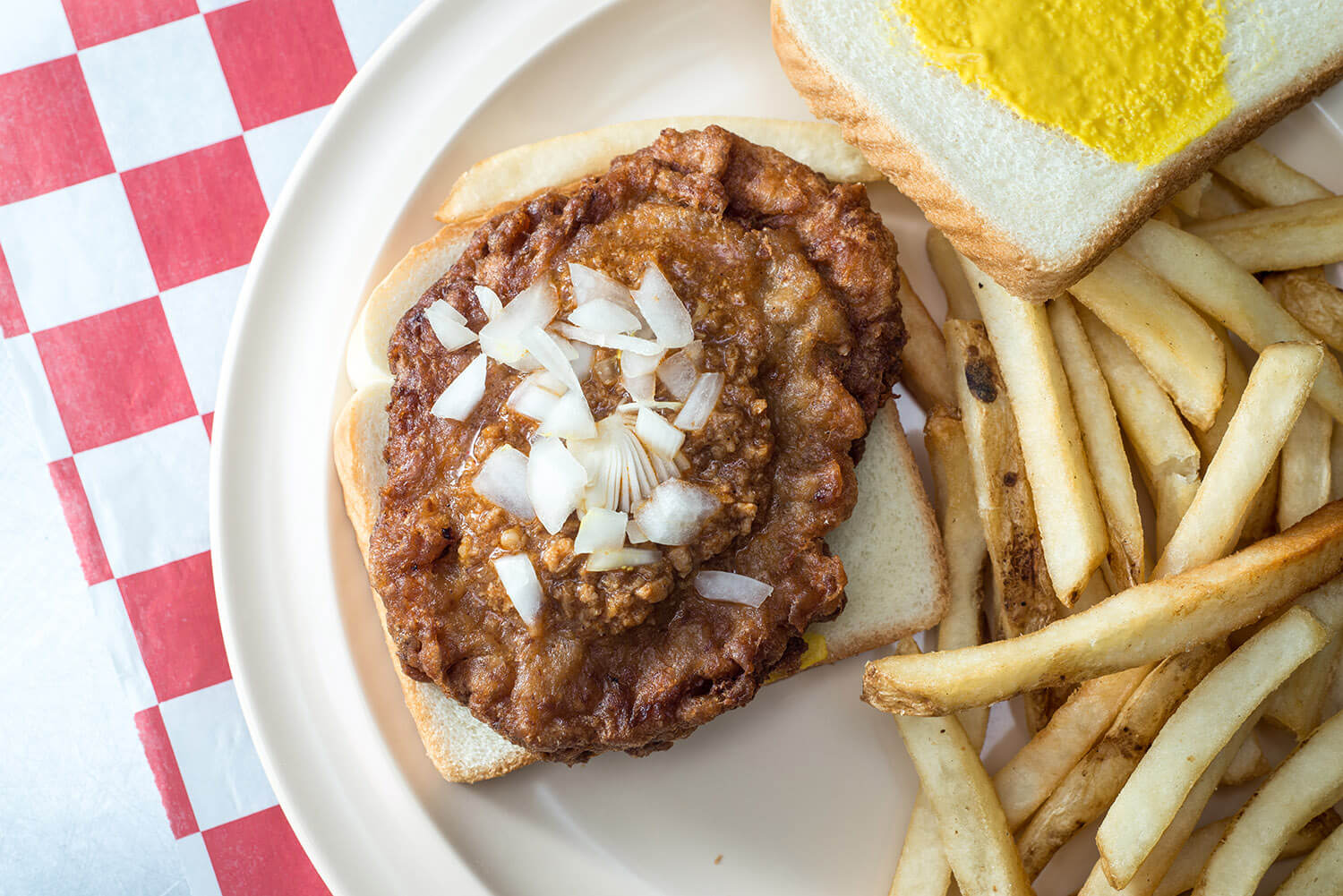 Seat yourself at Lovick’s, where the portions are plentiful. Next order of business: a nap. photograph by Zach Frailey

Kinston burns bright these days, but the fire didn’t start itself.

Chef & the Farmer and Mother Earth were the sparks that started it, opening in 2006 and 2009, respectively.

“Somebody had to be the one to take a chance downtown,” says Johnathan Hughes, who does historic restoration in the area. A friend of Hill and Mooring, Hughes grew up in Snow Hill but recently moved to Kinston’s burgeoning arts and culture district.

When longtime residents talk of Kinston, they invariably speak of “The Magic Mile.” That’s what Queen Street was called in its heyday, back when it was the place in eastern North Carolina to buy your car, Easter dress, and vacuum cleaner in one fell swoop. You’ll see a lot of empty storefronts now, and you might wonder what will become of them, what will become of Kinston.

Hill has thought a lot about that, too. Big ideas come to him as he’s doing simple things, like coring tomatoes by hand for Mother Earth’s signature Homegrown tomato ale — the beer that started it all.

“In my opinion, Kinston won’t ever be what it was,” Hill says before a thoughtful pause. “I think it’ll be better than what it was because we get to remake ourselves the way we want to.”

Locals like to talk about their family’s roots in the area, how they sometimes can be traced back to the American Revolution. Recent decades have been both trying and formative for Kinston, but pride for this place was born out of the town’s earliest history.

Before Kinston was Kinston, it was Kingstown, named in honor of King George III of England. When we gained independence from the British, residents promptly dropped the “g” from town’s name, disavowing the crown.

Those Kinstonians were resolute in defining the town for themselves, molding it the way they’d like to. By the looks of the revolution the town is seeing in 2016, they still are.