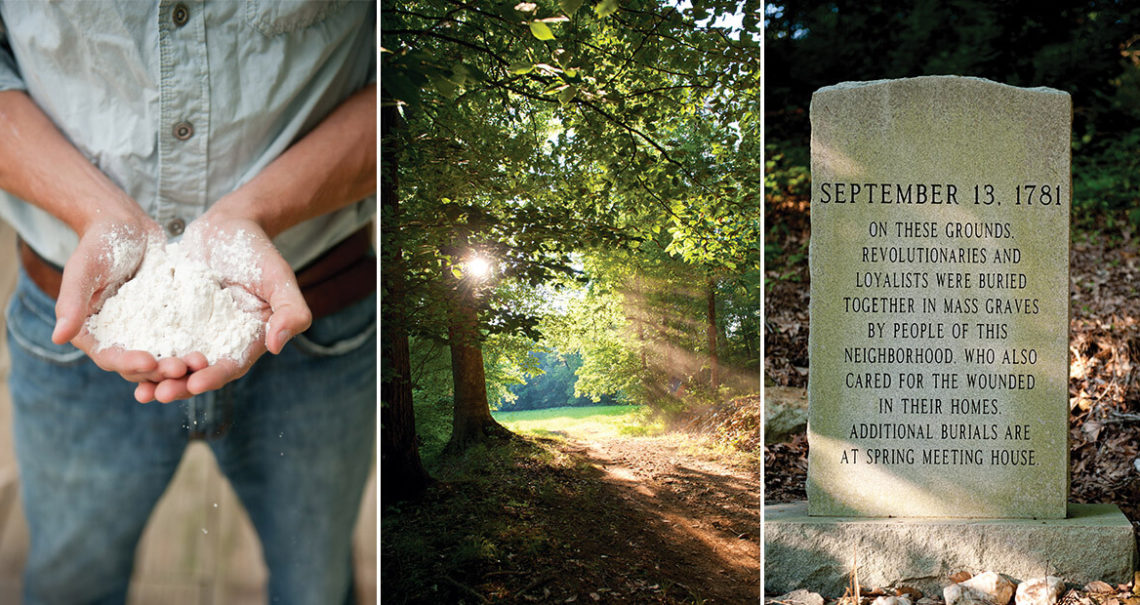 EDITOR’S NOTE: This story originally appeared in the September 2010 issue of Our State.

When Joe Lindley walks down the hill from his Alamance County flour mill, it’s both a short trip and a long one. Historical markers stand here, noting a turbulent time in both the history of North Carolina and his own family.

The land around the peaceful mill, where Lindley has produced organic flours since 1976, was the site of one of the bloodiest battles of the American Revolution.

On September 13, 1781, the unofficial end of the Revolutionary War was only a month away. Six months earlier, Maj. Gen. Nathanael Greene confronted British forces at Guilford Courthouse in North Carolina’s most famous battle of the war. The Battle of Lindley’s Mill, which took place on that September day, left an estimated 52 dead and 180 wounded. The tale of the battle involves kidnapped politicians, family conflict, and a colonel who used what today might be called terror tactics.

Based on school lessons and common lore, many people believe that everyone in the colonies supported independence. Not true. Many communities were deeply divided between those who supported Britain, called Loyalists or Tories, and those who wanted independence, called Whigs. The issue also divided many North Carolina families.

Joe Lindley’s ancestor, Thomas Lindley, started the mill on Cane Creek in 1755. “I like to tell people there was a Lindley’s Mill before there was a United States of America,” Lindley says. “Thomas Lindley was a Quaker — nonviolent people who were firm believers in individual rights. It must have been a pretty tough course to take back then because you were probably expected to take one side or the other.”

Violent roving militias added to the problems. “There was a power vacuum in 1781. There were no official forces left here,” says Josh Howard, research historian in the North Carolina Office of Archives and History.

Greene’s Continental Army had moved into South Carolina. British Gen. Charles Cornwallis had marched into Virginia. The few hundred British stationed in Wilmington made up the only large body of nonmilitia troops of either side left in the state.

Militias were local groups of residents using their own weapons and equipment, not official armies. Individuals who joined Loyalist militias faced dire consequences. If caught, they likely faced imprisonment or exile; a few were executed. Fighting in North Carolina had turned into a civil war between Whigs and Tories for control of the state, with few connections to the larger war for American independence.

The conflict extended into the Lindley family. Three of Thomas Lindley’s sons were Loyalists, and one fought for independence, according to The Battle at Lindley’s Mill by Stewart Dunaway.

One of Thomas Lindley’s Loyalist sons served under an infamous figure in the state’s Revolutionary War history, Col. David Fanning. Fanning conducted random attacks designed to create fear and civil disorder, much in the style of terrorism. On the day before the battle at the mill, Fanning led a 700-man militia into the then-Colonial capital in Hillsborough. The brazen force kidnapped Gov. Thomas Burke and a number of legislators and other officials — about 200 people in all.

The ambitious Fanning planned to triumphantly deliver the state’s third governor to the British in Wilmington. “The main road from Hillsborough to Wilmington ran right through here. The road from the Piedmont intersected here, too,” Joe Lindley says. “You can still see the old roadbed where it makes the turn.”

Mills were common targets for armies looking to obtain food for men and horses. Cornwallis paid a visit to Lindley’s Mill earlier. “He purchased flour maybe twice for British troops. Purchased at gunpoint, that is,” Lindley says.

Word of the kidnapping reached Brig. Gen. John Butler of the North Carolina militia within hours, and he knew what route Fanning would take. Butler, who fought at Guilford Courthouse, quickly organized a force of about 400 men.

Butler got to the mill first and set up on high ground, surprising Fanning. Fanning sent the prisoners to nearby Spring Friends Meeting House for holding. Butler’s forces tried to reach them as the battle continued for about four hours. Eventually, Butler had to retreat before he was surrounded. Fanning was seriously wounded in the battle, and he hid out in the area while he recovered.

Butler tried to pursue the Loyalist forces, but because of a delay in reinforcements and other factors — including a rumor that the prisoners might be killed if he followed — the pursuit was unsuccessful.

After the battle, the militias fled so quickly that both sides had to leave their soldiers where they fell. But the men were not abandoned. Area residents — primarily peace-loving Quakers — flocked in to bury the dead and care for the wounded. Out of pure compassion, they took wounded men from both sides into their homes — small log houses owned by poor farmers. Nursing the large numbers of wounded soldiers must have been a long-lasting community effort.

A casualty of the battle was Thomas Lindley himself. “The family legend is that he died on the day of the battle from the stress of it all. He was 80-something,” Joe Lindley says.

Governor Burke and the other prisoners were delivered into British custody on September 24, 1781. Burke, who had been elected governor less than three months before he was seized, eventually escaped and made it back to his home in Hillsborough in early 1782. He died in 1783 at age 39.

The kidnapping didn’t give Fanning the boost he craved. When the British surrendered, he became a hunted man. He fled to Canada, but North Carolina didn’t forget his actions as a Tory militia leader. In an effort to soothe the wounds left by the war, the State Legislature passed an act pardoning those who fought for the Loyalists. Fanning was one of only three exceptions mentioned by name.

Joe Lindley’s parents purchased the mill and surrounding property in 1975. He restored it and taught himself how to mill flour. Today, he produces organic rye, wheat, and buckwheat flours and cornmeal. Aside from the satisfaction of bringing back a nearly lost art, he believes the mill has a deeper meaning because of its role in history.

“If I go down and look at the marker, you think this was something that happened 200-some years ago, but in the big picture, it’s just the wink of an eye,” Lindley says. “It makes you think that human nature doesn’t really change. What turmoil there must have been in the people’s day-to-day lives, with the battle and being in a war situation and even after that. It gives you pause to think.”