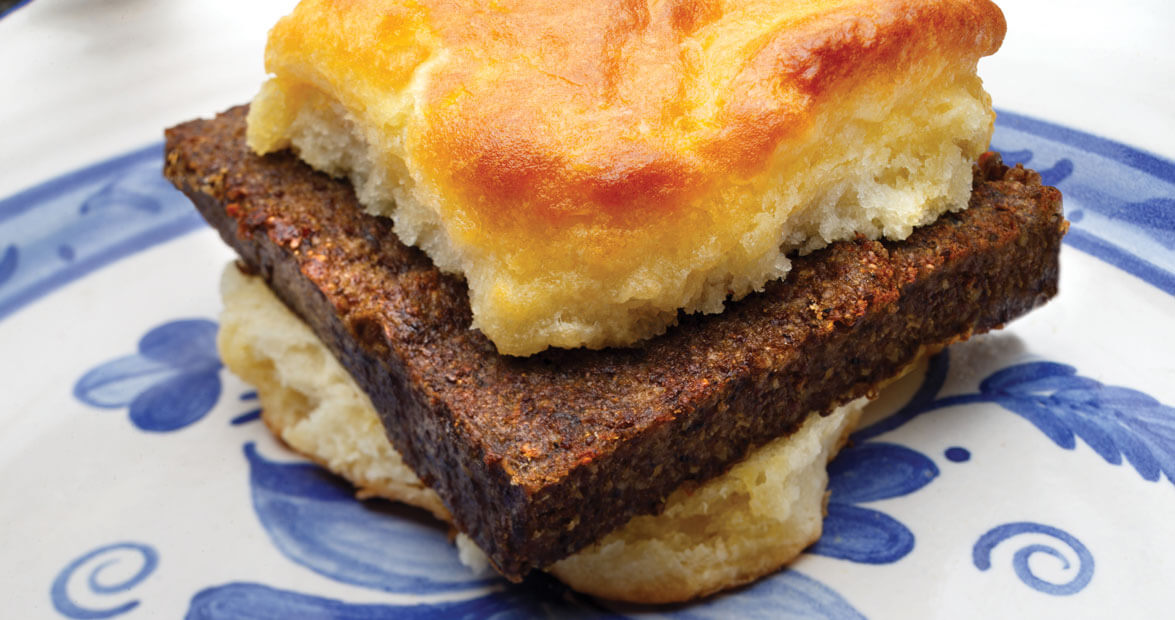 On one of those crystal blue October Saturdays that halts us at the door and reminds us how much we love living in North Carolina, people fill the town square of Shelby, 45 minutes west of Charlotte. Here at Mush, Music and Mutts, North Carolina’s official (but not only) livermush festival, kids romp through bounce houses and queue up to paint miniature pumpkins. A herd of dogs wearing costumes (naturally) parades down the sidewalk, pulling along their humans.

Starting at the corner of East Warren and South Washington streets, festivalgoers are lined halfway down the block through vendors’ tents. They’re all waiting for a livermush sandwich from Mack’s Liver Mush & Meat Co. Under two tents next to the Mack’s white box truck, a swarm of workers slice mush from big blocks, drop it into deep fryers, and serve it up on buns. Their identical T-shirts read, “I like pig butts and I cannot lie.” 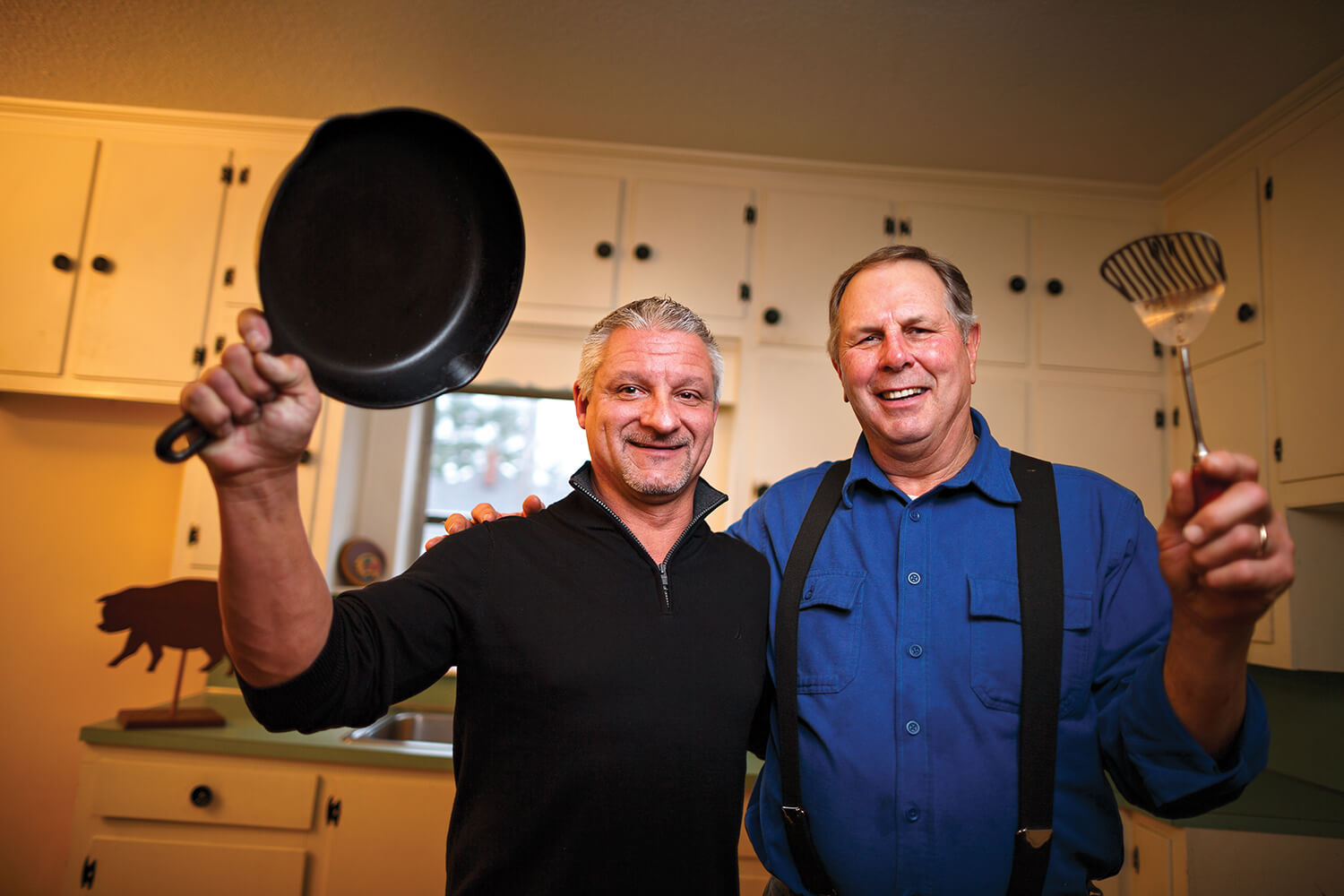 Ron McKee, owner of Mack’s, has become the face of livermush, a product made of pork liver, head parts, and cornmeal. He’s appeared in at least three televised stories about it. With a Southerner’s propensity for alliteration, he describes livermush as a “fine-ground, fully-cooked, low-fat sausage.”

When livermush is covered by food or travel networks — more than one national TV host has been to Shelby — it tends to fall into the category of “Southern weird,” like Pepsi with peanuts. But, just like fried green tomatoes, there’s nothing weird about livermush to the people who grew up eating it.

Draw a line through Mecklenburg County northwest to Guilford and Rockingham counties. If you grew up west of that line, you know livermush. Mention it to just about anybody in this part of the state, and they nod their heads: “Yep.” It’s as much a staple here as bacon.

Enough customers are buying livermush to support not just one, but two manufacturers whose primary product is livermush. Mack’s is one. Jenkins Foods is another, less than a mile away. Between them, they sell 34,000 to 40,000 pounds of livermush every week.

The story of livermush in western North Carolina is one of economic history, cultural history, and even family history; though they’re direct competitors, Ron McKee of Mack’s and Harry Mauney of Jenkins are related.

The Great Depression isn’t an era we associate with starting a successful business. We generally think of it as a time when businesses folded. In fact, that’s exactly what happened to B.P. Jenkins before he and a handful of others created a whole new industry in North Carolina.

According to his grandson Harry Mauney, B.P. (short for Benjamin Plato) Jenkins ran a general store with his brother outside Shelby. When it folded in the early 1930s — his customers no longer had the money to buy his goods — he began thinking about what he could sell to the stores that remained.

Jenkins and his wife had always kept livestock — dairy cows, chickens, and hogs — to feed their family. “The couple was pretty self-sufficient,” Mauney says. Using his family’s recipe, Jenkins started cooking up livermush in bulk in a big cast-iron pot over a wood fire. At first he sold it out of the trunk of his car.

Livermush goes way, way back. Long before eating “nose-to-tail” was a foodie fad, generations of family farmers cooked that way. The Jenkinses weren’t unique in their self-sufficiency — it was in their bones. When thinking about North Carolina culinary history, remember that the state was settled in part by frontiersmen and -women who emigrated from Germany by way of Pennsylvania. (The Pennsylvania Dutch weren’t Dutch, but Deutsch.) They would have brought with them a taste for liverwurst, a pork-meat and liver smoked sausage that traditionally contained bacon. It isn’t hard to imagine liverwurst evolving into livermush in a frontier setting, since it’s both easier to prepare — the meat is boiled, so there’s no smoker to maintain — and requires less meat, using cornmeal and flour as a filler. (One assumes livermush doesn’t contain bacon because someone wised up and just ate the bacon.)

So when Mauney says, “Everybody grew up eating it,” he’s not just talking about his grandfather’s generation; he’s talking about everyone in that part of the state, going back 200 years.

Make no mistake — heavily seasoned with sage and black pepper, livermush is delicious. It tastes like sausage. The fact that it isn’t universally adored by those who grew up around it seems to have more to do with the texture — which is less like sausage and more like a spread — and a discomfort with consuming organ meat. This issue can sometimes lead to misunderstandings.

Jackie Bridges, a Kings Mountain native and a reporter for The Shelby Star for 29 years, recounts a story her dad used to tell her: “When he and my mom were first married, he cooked her a breakfast of livermush and eggs. He liked to scramble [them] together. She was from Alabama and had never seen livermush. She asked him what it was, and he wouldn’t tell her. She was so mad at [him], she threw the livermush and eggs out the door.”

He must have told her, because she kept letting him make her breakfast. Eventually, Bridges says, her mother tried it and liked it. Livermush isn’t one of those foods only the natives can love.

People eat livermush all kinds of ways: My coworker likes it cut up into grits; a friend’s father ate it with tomato, mayo, and onion on white bread. I ran into a colleague in New York City, a North Carolina native who remembers eating it spread on saltines after school. (Given that she grew up in Fayetteville, she may have been eating liver pudding, which, according to Mauney, is softer than livermush and more common in the eastern part of the state.)

For Clark Barlowe, a native of Lenoir and the chef and owner of Heirloom restaurant in the Mountain Island Lake area of Charlotte, it was all about livermush on a biscuit, with mustard, when he was a kid.

Back in 1933, thanks to livermush’s familiarity and its very low cost — about eight times less than bacon — B.P. Jenkins stumbled into a market with a lot of pent-up demand. He wasn’t alone in spotting the opportunity.

“At one point, there were four families in an eight-mile radius supporting their families selling livermush,” Mauney says. (Incidentally, two other “cheap eats” icons in North Carolina started or expanded during the Depression, too: Lance and Krispy Kreme.)

A cousin of Jenkins’s even wanted to take the business to Georgia, and wrote to ask for the recipe and advice on how much he should sell it for. Mauney keeps the letter framed in his office. “You could probably get seven and a half cents in Georgia,” his grandfather wrote. “I can only get five and a half cents — it is competitive up here.”

One competitor was a new relative. Jenkins’s sister, Mauney’s great-aunt, married a McKee (Mack, for short), who was also getting into the livermush business. To keep the peace, Mauney says, Jenkins and Mack had “a gentleman’s agreement. Mack went east and my grandfather went west to avoid competing with each other.” He adds dryly, “Of course, it doesn’t work that way anymore.”

Chop. Drop. Serve. Eighty years later, the town of Shelby is celebrating what food journalist Andrew Zimmern calls its “micro-regional food tradition.” The line for Mack’s livermush sandwich keeps growing. The aroma of fried pork fills the air; the atmosphere is festive, and nobody’s complaining about paying just a dollar for their favorite lunch.