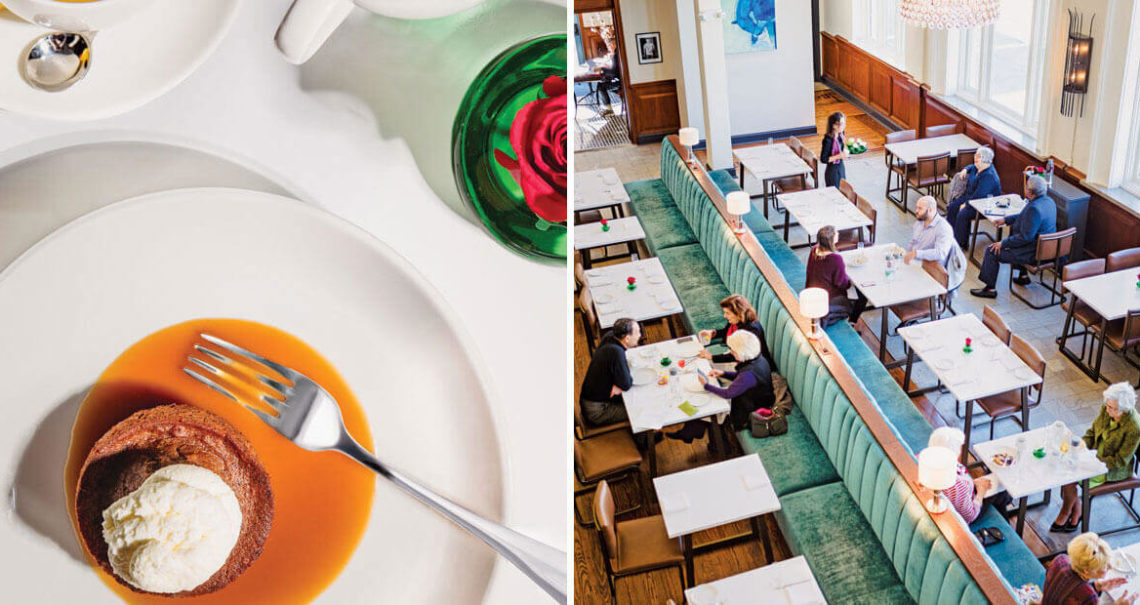 A visit to The Hackney feels like seeing a childhood chum who ventured out into the world and now has returned home, more refined and adventurous, perhaps, but still familiar. We know him, but we don’t know him quite like this. Washington’s new restaurant and gin distillery, located inside a historic stone bank building downtown, merges Southern and British traditions as effortlessly as the Pamlico and Tar rivers swirl together only a few steps outside the door.

Susanne Hackney Sanders, who owns The Hackney with her British husband, Nick, grew up along this nurturing estuary. She knows the region, its food, and the importance of a warm welcome. At the start of dinner service, she stations herself at the front desk in the lobby to greet arrivals. This is also where she sits to type the changing menus — which may include local fish roasted whole, beef Wellington, or traditional sticky toffee pudding. Here, local North Carolina flavors are buttoned up in British finery. 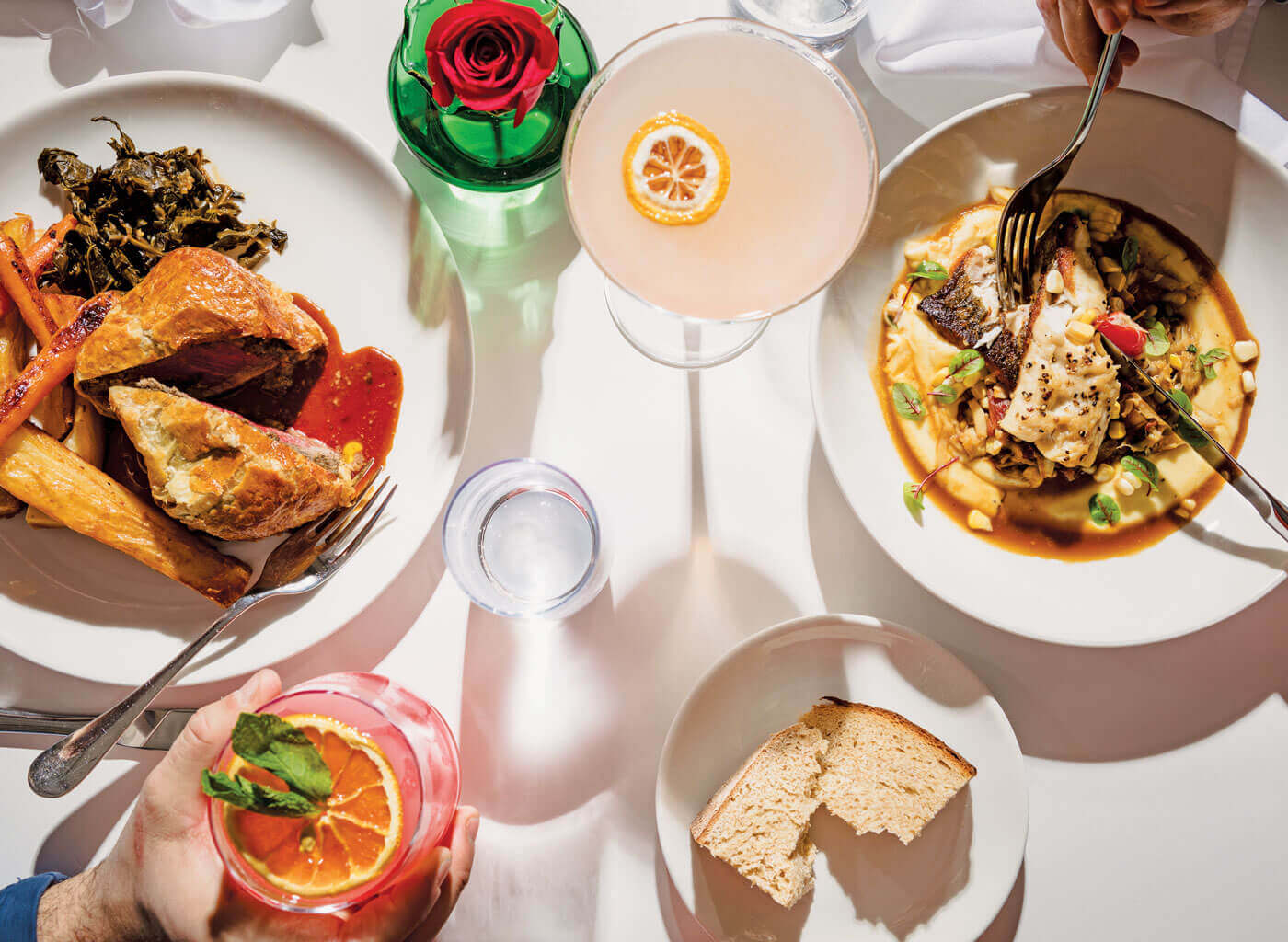 Beef Wellington (left) gets a Southern accent with a side of collards, while a very English parsnip puree takes the place of grits underneath local trout.

The restaurant’s culinary perspective is a reflection of the couple’s own story: Susanne met Nick on Franklin Street in Chapel Hill while both were attending business school at University of North Carolina in the early 1990s. After they married, they lived abroad — mostly in England and France — and pursued careers in multinational businesses. When their two children decided to attend colleges back in the U.S., Susanne and Nick began pondering a return to the States as well. But Susanne was pointedly clear that if they did move, the only place she’d consider living was her hometown of Washington. “I wanted to make a new home back on the river, on the water,” she says. “River life shapes our lifestyle, our architecture, and our heritage. I missed the light and the sun. I wanted to come back and relive that.”

Nick was game for a change of pace and a return, in a sense, to where their partnership began. “This place is a statement about us, about our pasts and personal histories in London and in the American South,” he says. Although he’s involved in nearly every role in the restaurant, there’s a notable twinkle in Nick’s eye and a lilt in his voice when he’s chatting with guests, moving between tables and checking on those at the bar, ensuring that everyone is well tended. On a busy night, the place crackles with a cheery energy that, as Nick says, “melds big-city vibrancy with hometown hospitality.” 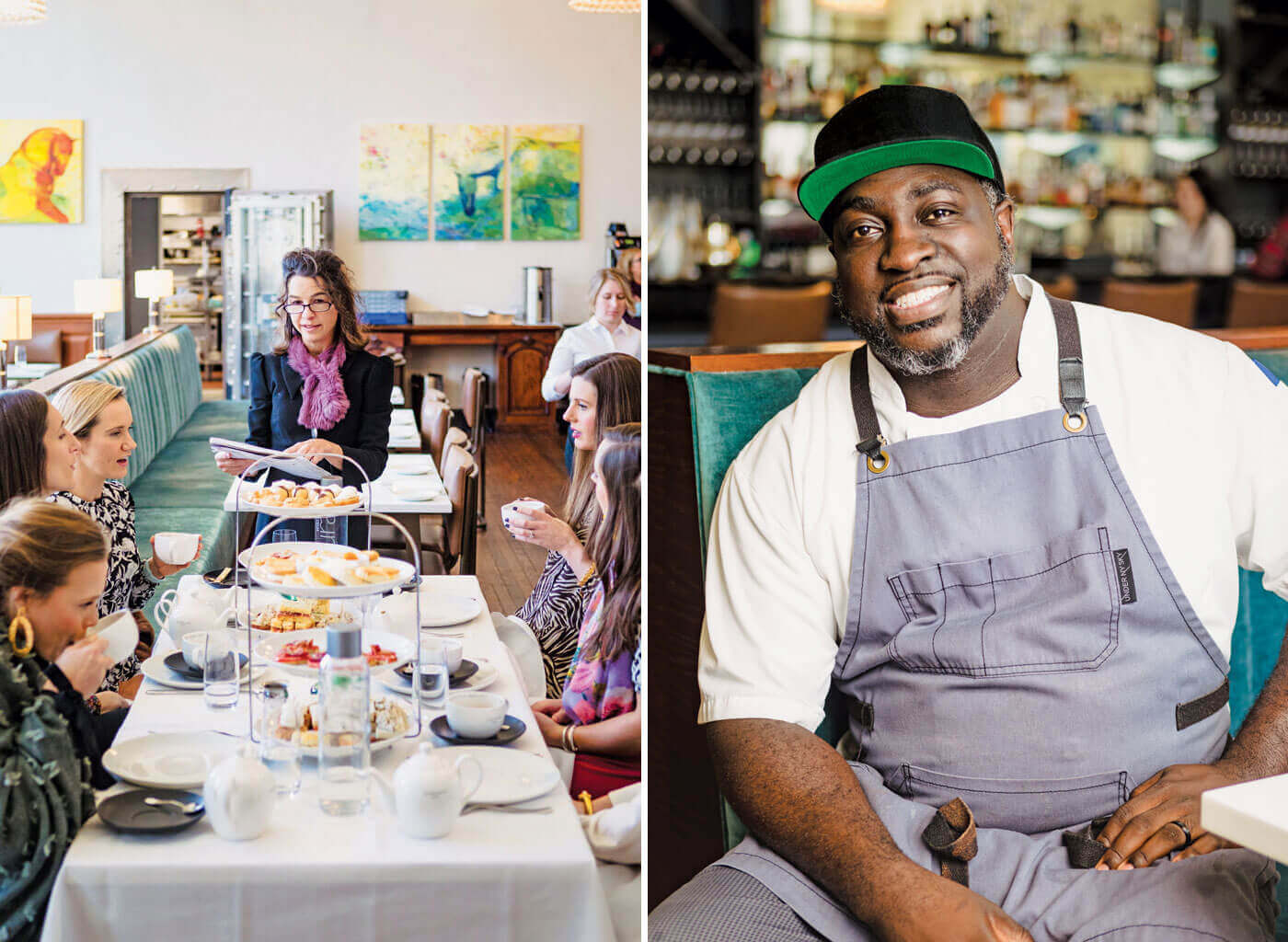 Susanne serves finger sandwiches and sweets during afternoon tea. Chef Jamie Davis brings local flavors to the lunch and dinner menus through his connections with coastal farmers and fisheries.

When the Sanderses stepped inside the empty neoclassical building on the corner of West Main and North Respess streets in August of 2016, it was love at first sight. Standing in the vast, stately space that once held a bank on the first floor, assorted offices above, and a radio station on the top floor, the couple began to envision a distillery, a restaurant, and a boutique hotel — a variation on the very British concept of “restaurants with rooms” that they had admired during their life abroad.

But such an ambitious project required a wise and efficient approach. They settled on a plan to restore the space while simultaneously opening the business in three stages, starting with a fine-dining restaurant, The Hackney, in January 2019. The restoration of the building is part of a larger revitalization movement taking root in downtown Washington, which is funded through private and public investments, including grants from local organizations.

“River life shapes our lifestyle, our architecture, and our heritage.”

The Hackney’s 1922 building was designed by Wilson-based architects, Benton and Benton, who were known for creating banks and other municipal buildings in the area. With guidance from Preservation North Carolina, Nick and Susanne have undertaken the work as deliberately and attentively as possible. Their aim is to reveal and refurbish architectural features and to make improvements — not replacements — whenever possible. The restored marble floors in the foyer flow into polished pinewood inlay, just as they did when the teller line delineated the space between the tony lobby, where the customers stood, and the serviceable areas where employees worked. The marble that was needed to restore the lobby floor to its original splendor came from Florence, Italy.

So far, the Sanderses have invested more than $1 million in restoration work and furnishings — much of it bespoke and North Carolina-made. Six enormous crystal chandeliers drop from the two-story, vaulted, coffered ceiling that’s edged with dentil moldings and detailed millwork. A glamorous, two-sided banquette fills the middle of the room, serving as seating for small tables. Lamps dot the long banquette and the bar, casting the room in a kind of full-moon glow that’s both bright and soft. The 13-seat bar runs down one side of the room, with bottle-filled shelves crossing a soaring mirrored wall that reflects the light. Nick worked for weeks with an acoustic engineer to ensure that the room’s design worked well for both intimate conversations and festive gatherings.

But the back of the restaurant is, in many ways, the real star. Here, a ponderous old vault door with visible cogs and levers that once locked away cash now serves as a portal to the kitchen. Chef Jamie Davis, born and raised in Jacksonville, works with the Sanderses to create a fine-dining menu with a British sensibility, emphasizing local, seasonal ingredients. The menu changes every few weeks to keep the farm-to-table journey as short as possible, but, Davis adds, “We will always have a great steak and plenty of oysters.”

Davis credits the success of his dishes to his relationships with local farmers, fishermen, and purveyors. “You can taste the flavor of immediacy,” he says. Printed prominently in the top right corner of each menu are the names of the four local farms that provide the majority of The Hackney’s fresh produce: Deep Roots Farm, Locavore Market Gardens, Southside Farms, and Beaufort County Organics; the origins of the beef and seafood appear in recipe titles and descriptions.

“Relationships with fishermen who call me as they pull into dock help me push the boundaries of what I can put on our plates,” Davis says. “And I hope that the lady over in Castalia will keep raising all the chickens and turkeys I need.” He ticks through a list of purveyors. “Oh, oh,” he says, trying to squeeze in one more name. “And Ana Shellem’s shellfish can’t be beat!”

The same can be said of The Hackney’s two “happenings,” as the British say, on Sundays: One is a proper afternoon roast featuring two entrées, such as beef Wellington, roast beef with Yorkshire pudding, or a clever roast that’s less typically British, such as Italian porchetta made from North Carolina pork. The other is a classic afternoon tea, including house-made savories and cakes, accompanied by hot tea or cold flutes of something bubbly.

Ever the Englishman, Nick prefers a distinctive tipple. “When it comes to spirits, nothing is more quintessentially London than gin,” he says. “It’s our thing, our house spirit.” Gin is the most culinary spirit, too, thanks to its nuanced infusion of spices and botanicals. That complexity has always appealed to the Sanderses, who have enjoyed gins from around the world and even tinkered with a recipe in their home kitchen. So adding a gin distillery and tasting room to the restaurant was a must.

While the bar offers a range of cocktails and a rotating selection of craft beers, guests will no doubt be tempted by the enormous, gleaming German-made still that anchors the distillery, a room unto itself behind the dining room bar. “The English know gin,” Nick explains, “but the Germans make perfectly engineered stills.” Southerners, meanwhile, know the power of place: The Sanderses’ gin is named “1000 Piers,” a tribute to Susanne’s beloved Pamlico waterfront.

Now that the distillery and restaurant are open, the Sanderses are turning their attention to the next phase: 14 elegant guest rooms on the building’s two upper floors. Susanne is busy planning: As with the restaurant, the fabrics, furnishings, and decorative touches will be sourced from North Carolina as much as possible, but creative inspiration will flow from across the pond, too.

“We’ve nodded to the history of this place,” Nick says. “This is a space of stature, and it drives us to be special.”

For Susanne, that means delighting in every detail, from the new fabrics and furniture to restoring and revealing special features that echo the past. “Details matter,” she says. “Details distinguish us. Details gratify.”